Strap On a Jetpack and Save the World

It's interesting going back to old superhero films and seeing how the genre has changed in the past decades. As is always worth mentioning, the superhero genre was very different before the one-two punch of the 2000 X-Men and the 2002 Spider-man. Before those films, superheros weren't viewed as big business (at least if you weren't BatmanOne of the longest running, consistently in-print superheroes ever (matched only by Superman and Wonder Woman), Batman has been a force in entertainment for nearly as long as there's been an entertainment industry. It only makes sense, then that he is also the most regularly adapted, and consistently successful, superhero to grace the Silver Screen.), and even films that studios wanted to make had to be drastically changed from their comic book roots to, supposedly, "appeal to theatrical audiences." Superheroes were for kids, but a movie clearly had to change everything to be for more than kids. 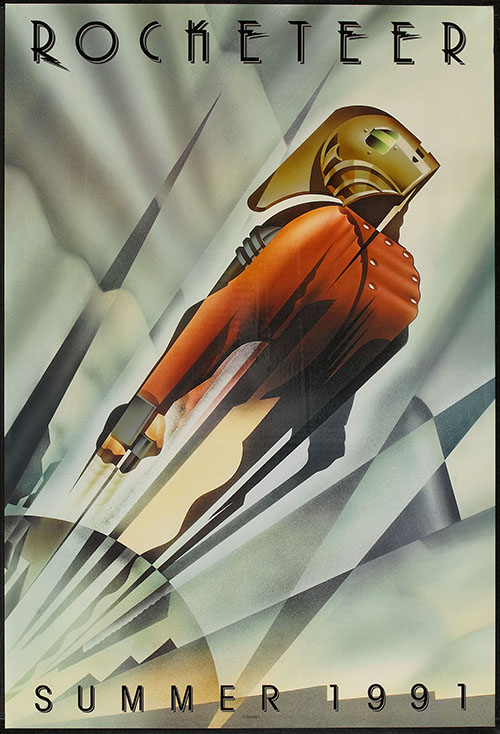 Of course, now studios are scrambling to crank out superhero products that respect the comic book origins (even if they massage the details in adapting 80 years worth of content) and gives us rollicking adventures we actually want to see. Disney is, of course, considered the undisputed king at this point, having a stranglehold on the Marvel Cinematic UniverseWhen it first began in 2008 with a little film called Iron Man no one suspected the empire that would follow. Superhero movies in the past, especially those not featuring either Batman or Superman, were usually terrible. And yet, Iron Man would lead to a long series of successful films, launching the most successful cinema brand in history: the Marvel Cinematic Universe., the most successful franchise ever, making Disney the arbiters of superhero success; if you want to make a superhero film, you have to compare yourselves to what Disney is doing (and either do what they're doing or try and go in the opposite direction an, generally, fail, such as the DC Extended UniverseStarted as DC Comics' answer to the MCU, the early films in the franchise stumbled out of the gates, often mired in grim-dark storytelling and the rushed need to get this franchise started. Eventually, though, the films began to even out, becoming better as they went along. Still, this franchise has a long way to go before it's true completion for Marvel's universe.).

It wasn't always this case, mind you. Back three decades ago, Disney was just as clueless about how to make superhero films that would appeal to mass audiences as everyone else. Their idea, instead of trying to get the rights for one of the successful franchise out there (this being a good while before Disney would just buy Marvel altogether), they'd take an upstart hero and do their "Disney thing" with it. Thus was born 1991's The Rocketeer, a superhero adventure based on a 1980's comic you're probably never heard of outside of the context of this movie (if you even realized it was based on a comic at all).

This film doesn't really feel like it's playing in the same pond as superhero films now, more like it was reacting to Batman '89 with its weird, art deco aesthetic and Tim Burton flourishes, and wanted to do something like that just safe and for families. It's a film with some tonal issues and some plotting issues, that rushes through a lot of the details of the story to get to the next whiz-bang set piece. And yet, at the core of the film is an adventure that's hard to hate. It's goofy and weird (and very silly) but it has pure joy and love for super-heroics and that goes a long way when carrying a superhero adventure.

In the first we're introduced to down-on-his-luck pilot Cliff Secord (Billy Campbell). He and his team, lead by engineer A. "Peevy" Peabody (Alan Arkin), have spent the last three years pouring all their money into a new plane they'd built and on the day of its maiden voyage, Secord immediately crashes it. It's not really his fault as he's just flaying over a field when he comes across a shootout between the mob and the FBI. His plane is caught in the crossfire, suffers a nasty landing, and basically burns up. Now what's he supposed to tell his best gal, Jenny Blake (Jennifer Connelly)? 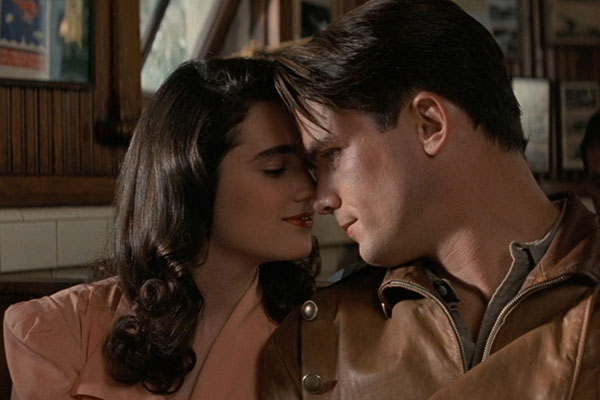 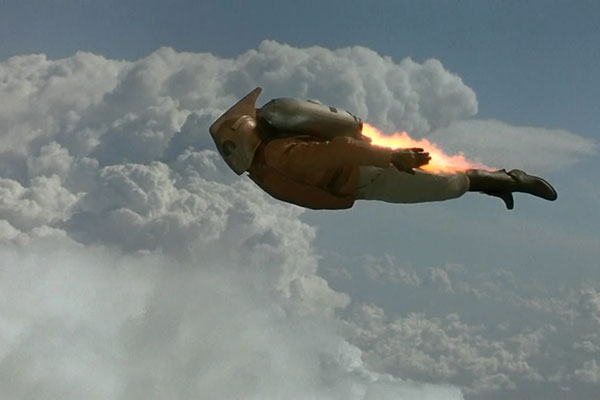 The shootout, though, does end up delivering a bit of salvation for the pilot and his crew. After crashing at the airfield, the mob goon hides a mysterious object in the crew's old plane before running off. Lo-and-behold, that object is actually a jetpack crafted by Howard Hughes. Once Cliff and Peevy get working on it, they take this prototype and make it really sing. Good thing they do, too, because it's more than just the mob that are gonna come sniffing around for this device; the Nazi's also want it so they can build their own army of "superman", flying soldiers that can go anywhere and strike at the heart of every country. Cliff has to keep this pack away from the Nazis while finding their secret spy and winning one for the Allies!

To the film's credit, it absolutely nails the retro aesthetic of the story. That makes a certain amount of sense, of course, if you know anything about the superhero films to come: this movie was directed by Joe Johnston who would go on to direct the loving retro tribute Captain America: The First Avenger. That film absolutely reveled in its retro aesthetic, letting the director indulge his creative vision. Here, though it feels like a dry run, like the director hadn't quite had the ability yet to convey super-heroic against this setting.

That's not the say the film doesn't do a good job with its visual style. From the costuming to the sets to the music, it does feel period-appropriate (more or less). There's even a great bit on a movie studio lot (as Hollywood loves to poke fun at itself) that features a swashbuckling film that feels both goofy and adventurous, like it could have been ripped from the set of The Court Jester (just, without the singing). There is no doubt that the film tries hard to set itself in a lovingly crafted era.

At the same time, though, it feels like artifice. The film never feels like it really documenting the 1940s during the ram up to World War II but, instead, feels like a film set with all the fakeness and artifice that comes with it. It comes across in a lot of ways, from sets that don't quite feel real, or villains that are obviously covered in layers of makeup (as if they walked off the set of Warren Beatty's Dick Tracy). Or just the fact that CGI hadn't gotten to the point where you could believably make a many look like he was flying due to the jetpack so there's obvious green screen and matting all over this film. In effect, the film feels very low budget, very safe. 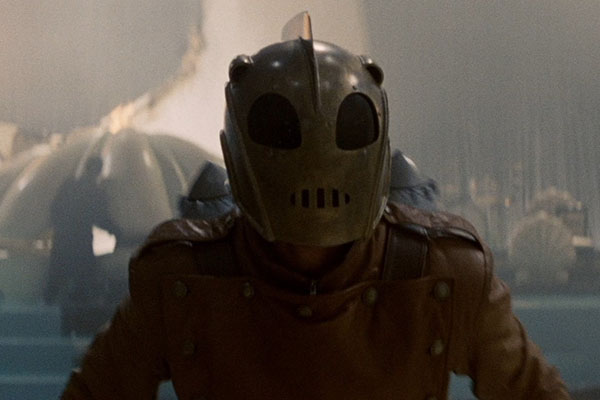 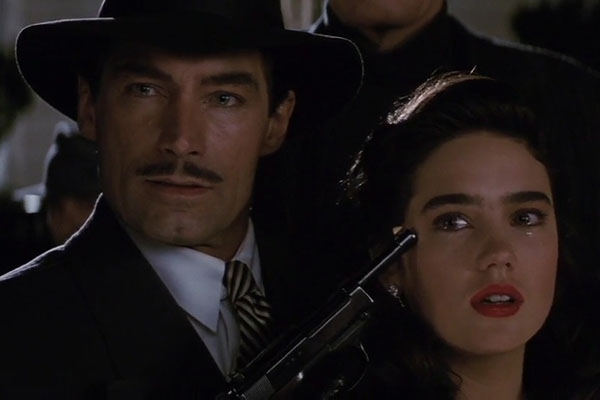 It's also very low-danger. Despite how much everyone in the film talks about how dangerous the jetpack could be, it never feels like the hero is ever in any danger. He puts the pack on once and suddenly he can fly it like a pro, safe and sound. Then there's the fact that, because it's a Disney film from back in the day, it's also bloodless. The action never goes far enough to make it feel like the hero has to act like a superhero. Whether flying across an airfield, or in a swanky nightclub, or flying over L.A. to take on a Nazi zeppelin, there's never a sense of danger, never any worry that he's going to get shot or stabbed, that he could end up seriously injured. He comes out of the film unscathed, time and again, like he's bullet proof (although I don't think anyone even shoots at him, as a matter of fact).

There are parts of the film that really do work. The acting is great from leads Campbell and Connelly. Better still is Timothy Dalton turning in a mustache twirling villain turn as the Hollywood star-turned-Nazi spy. Dalton has such a fun time that he carries his scenes and almost makes the big climax of the film work. It all amounts to a game cast that does their part to elevate the material they're given and sell a product to an audience not yet primed for superhero films (unless it's a film based on DC's two biggest male heroes).

But there's just something missing. It has heart but lacks adventure. The Rocketeer is a fun little adventure but the genre was destined for better things and, I think, even back then audiences knew studios could do better. We were itching for a big, whiz-bang adventure but this film only delivered a low does. It was a modest success, but not a big enough smash for Disney to green-light a sequel (no matter how much the end of this film might have tried to set one up). Disney would eventually buy up a smash series that still won't quit, but their first attempt to craft a superhero series fizzled instead of flew.