Play the Game with Your Fists

Generally I'm not a sports fan. I can get into some games when they're on, such as a really goof (American) football or rugby match, but end of the day most sports don't interest me. The two I've gotten most into are curling and marble races, so normal sports really aren't for me. By and large that also extends to films that revolve around a sport; any movie that's designed to sell you on "the love of the game" are preaching to the wrong crowd when it comes to me. 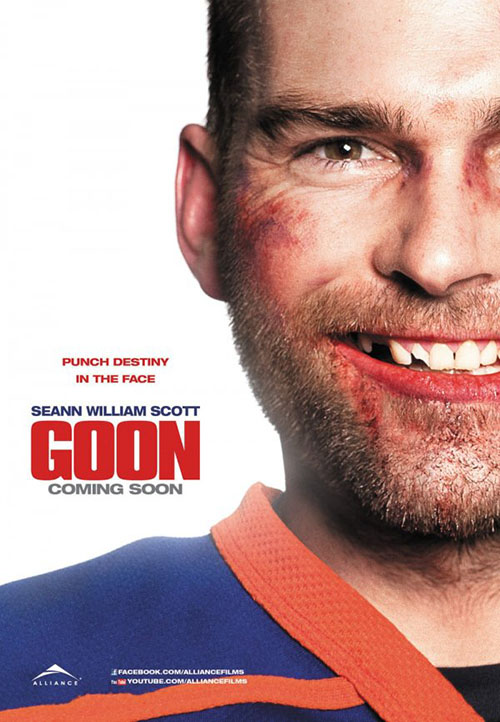 That said, I'm not immune to the occasional sports film that actually intrigues me. Not many come to mind beyond the Keanu Reeves film The Replacements, but occasionally some other film manages to suck me in and I'm able to have fun while "sportsball" goes on around the plot. One such film that was able to suck me in was Goon from 2011 (completely unrelated to the long-running comic book series, The Goon), although that is in large part because the plot of the film is great while the actual sport at the center of it is just there to add seasoning. That's the kind of sportsball I like (or, since this is a hockey film, sportspuck).

In the film we're introduced to our titular "goon", Doug Glatt (Seann William Scott), a pretty nice (if a little slow) guy who works as a bouncer at a bar. Doug is sweet, and he knows he's not the smartest guy around, but what he lacks in brains he makes up with his fists (which is why he has a job as a bouncer). One night he heads to a hockey match with his motor-mouthed friend Pat (an absolutely obnoxious Jay Baruchel), convinced to go to the rink because he really likes the corn dogs there, and when one of the hockey players throws some shit at his friend (and actually climbs out of the penalty box to start crap in the stands), Dough steps up and beats the ever-loving shit out of the guy, all without breaking a sweat.

The coach for the home team sees all this happen and gives Doug a call to come join the team. Dough, it should be noted, can't skate worth a damn but the power of his fists is what the team needs (as, in all reality, hockey is about 25% fights). Doug joins the team, works with the coach to learn the skate, and moves up the ranks on the hockey circuit as a reliable enforcer. That eventually get him a promotion to the farm-league team, Halifax Highlanders, where he's needed to help raise the team up and maybe get them into the playoffs. Dough is on the rise, which is contrasted with the last big enforcer, Ross "The Boss" Rhea (Liev Schreiber), and it's inevitable that these two titans of the rink will eventually face off in a punch-for-punch match for the ages.

Based (very loosely) on the autobiography by Doug Smith, Goon may be a story about hockey but, really, it's more a tale about a soft-spoken, kind-hearted guy making good with his fists while finding the love of his life, Eva (Alison Pill), in the process. The film has an interesting take on the material as, generally speaking, a film like this would show Doug using his fists to get ahead before inevitably learning that his words, and his deeds, are more important. But no, this film is all about the fights and the one lesson Doug learns is that he might not be the brightest guy but he can still be good at something. I liked that because it's a fresh take on the material, for sure. 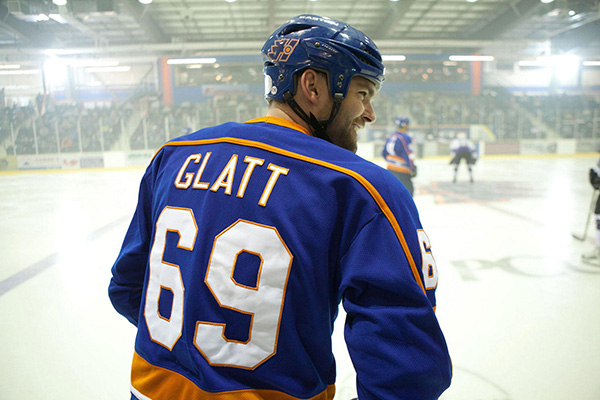 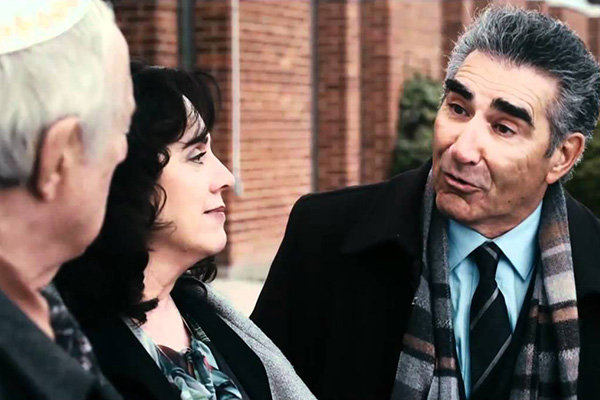 The love story between Doug and Eva works in large part because the two actors at the center, Scott and Pill, have solid chemistry. When Doug meets Eva she's dating someone else but there's an instant spark between them. Although Doug does what he can to present himself as a worthy mate, he also realizes that once she's dating someone for real, and it's serious enough, he tries to back off. But, again, there's sparks between them and it's up to Eva to decide what she really wants. This feels honest, and if the love story's resolution never really seems in doubt, at least it does seem natural.

If there's a weakness here it's that the boyfriend (who's name I don't remember and can't even find) is almost a total void in the movie. Were the boyfriend more of a figure, someone that appeared in more than a couple of scenes without any speaking parts at all, you might have wondered who Eva was going to go with. But the film isn't really interested in that, realizing that there was more chemistry to be derived between Scott and Eva. The boyfriend would make the love triangle more messy, but it might have also made it more realistic, but by not having him in as a real figure in the film it also means that you know, in the end, who Eva is going to choose (Doug, of course).

What is in doubt, and is a plot line that doesn't get resolved here, is Doug's relationship with his parents. These two, played by Eugene Levy and Ellen David, not only don't respect Doug (they hated his previous job as a bouncer and think his new career as a hitter for a hockey team is "juvenile") but they also try to pretend that his brother, Ira (David Paetkau), isn't gay (he's very, very gay). They come to one of Doug's games, tell him just how little they respect what he does, and then never come to see him again. This is harsh, but again I do feel like it's realistic. A different film would have said, "everyone learns to love each other because Doug is a hero," but I appreciated that the film kept this plot line messy and unresolved. Things don't always work out with families, and that's just life.

Then there's Laflamme (Marc-Andre Grondin), a once hot-shot hockey player who took a bad his from Rhea and has been gun shy ever since. He needs Doug to protect him on the ice but, at the same time, he also hates the fact that Doug is the big new player on the team, drawing all the attention away from Laflamme. This is a classic "hate you and then I love you" story and, much like with Eva, the resolution of this is never in doubt. In fact, although he's played up as a big hotshot, there really isn't much to the Laflamme character. He's around in the background a lot, and we see his reactions to Doug but, kind of like Eva's boyfriend, we never really learn much about him. When he finally shakes off his rust and comes out swinging again, we basically have to assume that it's because Doug beats up Shea (in the climactic final fight of the movie), but since we don't know enough about him as a character, this switch-flipping for Laflamme doesn't feel that well earned. 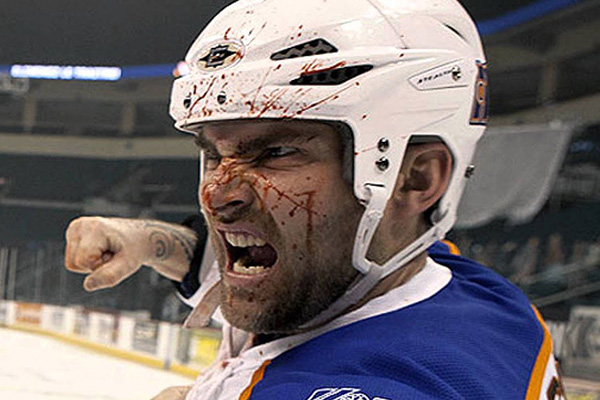 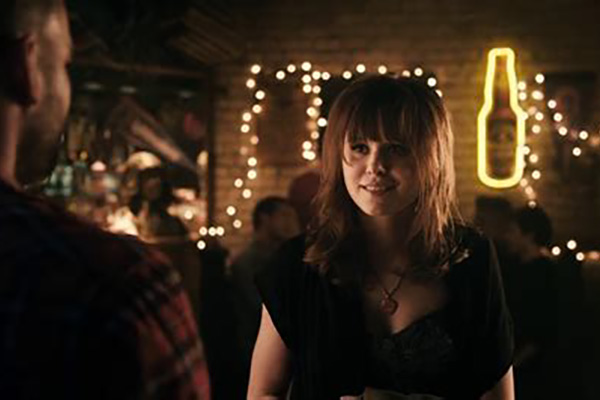 Now I don't want to sound too critical about this film; I've watched it a few times since it came out and I always find myself getting sucked it. Much of that is due to Seann William Scott, an actor I don't think gets as much respect as he deserves. He came to fame playing Stiffler in the American Pie films, and there he was a pretty shallow asshole. But outside of that series the actor has tried to branch out and play different roles and Dough here is probably the best character yet for Scott. If anything it's kind of an against-type role for the actor, a sweet and good-natured guy to go against all the Stiffler-like roles the actor had to go through. Scott, honestly, nails i here and he's the guy holding this whole film up. He's fantastic and the film is better for his inclusion.

And, yes, the fighting is great. The action is visceral and brutal, but it's played in such a way that as rough as it is you still feel elevated by it. It's a weird balancing act the film plays and I really rather enjoy it. When Doug gets out there and beats the snot out of a guy, he often then says, "good fight," or, "sorry," after and it's just sweet and innocent in a way. Doug's good at what he does, and you feel it every time he's out there, but he doesn't mean anything cruel by it. He just has a job and he's good at it.

That, I think, summarizes Goon: it's a piece of sports-comedy that has a job and it's really good at it. You come to this film for comedy, action, and just a little bit of love and the film delivers all that really well. Maybe the hockey isn't as much of a focus as some might like but for me that's not a bad thing; too much hockey and I might have tuned out. Give me some fights and a sweet and funny guy at the middle of it, though, and I'll watch it again and again.