NetflixOriginally started as a disc-by-mail service, Netflix has grown to be one of the largest media companies in the world (and one of the most valued internet companies as well). With a constant slate of new internet streaming-based programming that updates all the time, Netflix has redefined what it means to watch TV and films (as well as how to do it). has become something of a source for anime, and animated series, based on adult properties. The streaming network gained a fair bit a presences in that section with their well-received (at least until the last chapter) adaptation of Voltron, and they've found a fair bit of success with shows based on works like Jurassic Park and The Fast and the FuriousStarted as a film about undercover policing in the illegal street-racing community, this series has grown to encompass a number of different genres and become one of the most bankable franchises in the world.. 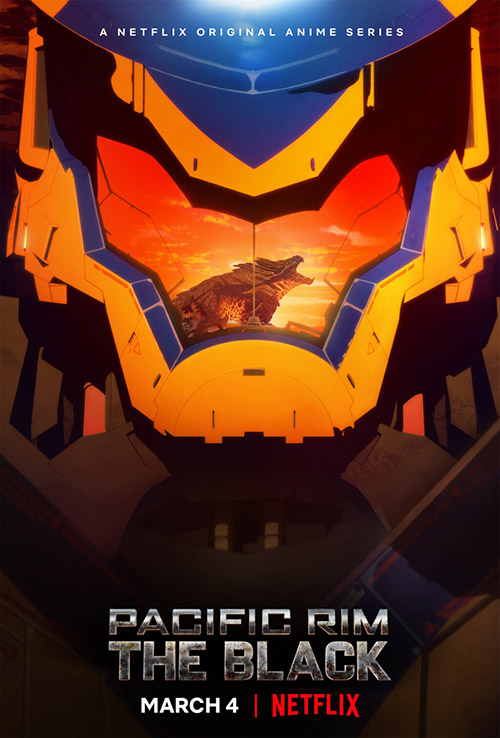 Adding to that collection is a franchise many of us had thought was all but dead: Pacific Rim. Although both the first film, Pacific Rim, and it sequel, Uprising, were well received by fans as they provided plenty of delightful robots-smashing-against-monsters action, neither full did well enough to really warrant continuing the franchise. That's probably what inspired the studio to work with Netflix on a continuation: fans will show up for the series (presumably), but animation is generally cheaper to crank out than a big, bombastic, live-action film.

If you're a fan of the previous films and what you want is more Pacific Rim, then this new series set in the same universe, The Black, does deliver. It has kaiju, it has giant robots, and there's a whole lot of action and smashing while things go "boom". That said, this series is quite unlike the films in a few ways, from its storytelling style to the cast that populates the show, and in its setting. This is a darker, bleaker show that also, somehow, all about kids. It's an odd fit for the main series although it does have its own charms.

While the films might have had a lot of robots and monsters, I wouldn't have classified them as very "anime" (and not just because of the fact that they were live-action). The Black, despite being produced by Legendary Television, and classified as American animation, is very anime. That's not just in the art style, which is done to match the anime 'toons from over East, but also in the storytelling conventions. We have the reluctant hero (two of them, in fact), the school students ripped away from their studies to save the world, the monstrous abomination that also happens to be a little kid, and on and on. This show has a lot of the conventions and tropes of anime, and if you don't like anime this show very likely won't be for you.

As noted, the show is also bleaker than what came before. Where the previous movies depicted humanity, each time, on the edge of defeat before finding a way to beat the Kaiju back and save the world, this series states that whole continents have been lost to the Kaiju and there's nothing humanity can do about it except flee to other places and pray. One of the continents lost was Australia, with the Pacific Fleet pulling out all resources and heading to the mainland. Unfortunately, what the United Forces leave behind are a school bus full of kids who are forced to setup camp in a secluded valley near an old military base and wait for help to arrive. And then five years pass. 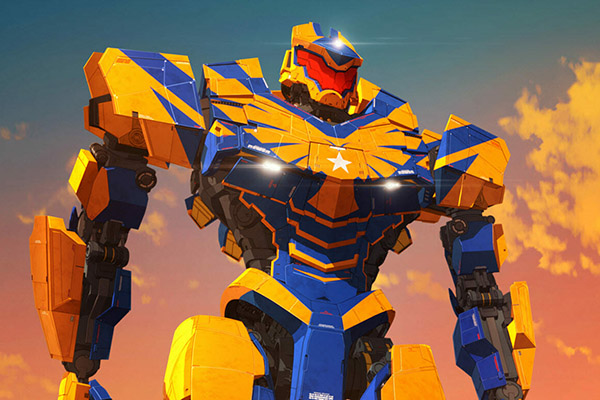 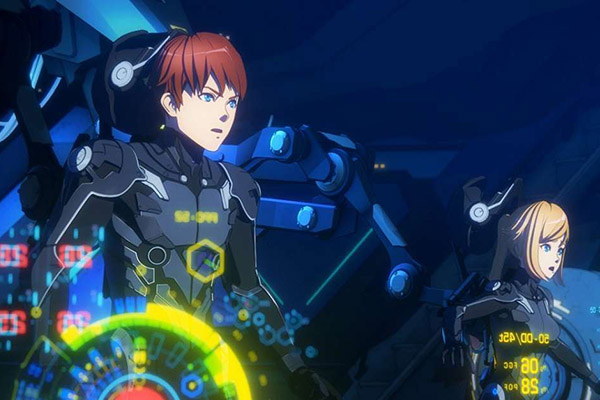 Over the course of those five years, various groups have left from base camp to try and find help. None of them returned. The two effective leaders of the camp, brother and sister Taylor Travis (Calum Worthy) and Hayley Travis (Gideon Adlon), have differing opinions about what they should do. Hayley thinks they should leave and go in search of help (and their parents), while Taylor thinks they should wait as, one day, their parents will come. Their decision is made for them, though, when Hayley finds a jaeger mech sitting in the military base and accidentally boots it up, creating a siren that attracts a kaiju. The monster attacks their camp and kills almost everyone there, forcing the siblings to flee, in the mech, and go out in search of help themselves. Now they have to learn to use their jaeger while dodging the dangers of the Australian outback, and the monsters (and kaiju, not the same thing) that live there.

The thing I liked best about the Pacific Rim films was the world building. These are films that felt lived in, with mechs that had battle damage, pilots that had their own kind of battle damage, and a long history of which we only got small glimpses. This is the kind of fleshed out reality that could support multiple works across a variety of media, so a show set in the same world certainly could work. At times Pacific Rim: The Black does work, giving us a fresh glimpse at the horrors the kaiju could cause if left unchecked.

At the same time, however, this series also feels like a weird fit for the universe. First of all there's the conceit of two trainees picking up a mech and operating it instantly. Yes, part of that is because the mech comes with an A.I. assistant that helps guide them (a bit of tech not seen in the movies before this), but it still stretches credulity that there would be a jaeger just sitting there at a base that the kids, one of whom was untrained before finding the mech, could instantly operate like it was riding a bike. I had a hard time investing in that after all the work the movies put in to show just how hard jaeger piloting could be.

Then there's all the monster flourishes the series adds in to the mythos. In the movies we saw there were five categories of kaiju, effectively from small (and least damaging) to large (most damaging). All of these were building sized monsters, and the tech the aliens were using to engineer these beasts and send them to our world made it seem like the point was destruction. Now, though, we see a couple of new kinds of monsters introduced, the first being kaiju-dogs. There's no explanation for where these beasts came from, whether a scientific experiment or they were engineered by the aliens. The point of them is to give a human-sized threat to the kids when they're out of the jaegers, but the dogs are just silly. They make no sense within the scope of the world we already knew, and it's hard to see what the purpose of them is to the world when it's so clear they're just meant as an environmental hazard within the show. "Time to add an action beat, so let's throw in a monster doggo." 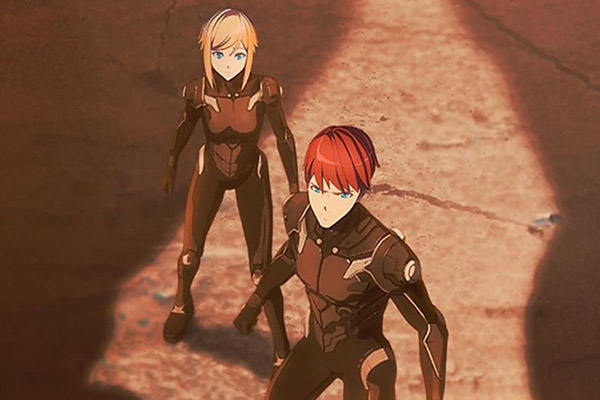 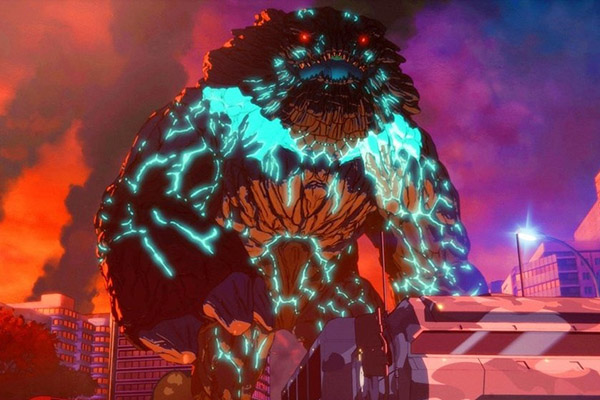 Some of the twists that are introduced make sense. There were the jaeger drones from the second film, ones that had become infected with the kaiju goo and became kaiju-jaeger hybrids. They return here and the threat they impose, but the kaiju and humans, is palpable. And we also find out that the kaiju that come to this planet and settle in start breeding and laying eggs. That's an interesting concept that leads one to think these monsters aren't just an invasion forced but a terraforming force as well.

But this is balanced out by the kaiju kid we meet. He's a kid, trapped in a military base, who acts weird and does talk. It's obvious, from the very first moment, that he at least has kaiju DNA in him and will be "the one" somehow. Not that the teens see it, or understand what's going on until the big "twist" is revealed. I think this was supposed to play as some epic reveal but (a) I figured it out the second the kid was introduced and (b) this isn't anything you haven't seen in other anime before. It doesn't really work in the context of the universe, not when you think about it (and especially not when the kid transforms into a giant kaiju), and it also just illustrates how stupid all the characters are.

It was really hard to get into the show just do to how stupid the teens act. They're constantly doing dumb crap, putting themselves into danger and trusting people they shouldn't. Their stupidity is the only way the show knows to motivate the characters and get the story going, and after a while I just found it tiresome. "Here's another instance where everyone should know what to do, but then the characters are doing the opposite." I found it beyond tedious.

Pacific Rim: The Black has some interesting ideas (mixed in with all the dumb ones) and clearly has some long-form plan in place for where the story will go. I just don't see how anyone is going to want to stick around for it. Yes, I watched the entire run in an evening (it's only seven episodes, with most episodes coming in around a half-hour), but that was because I have this site to run and this show fits perfectly in the genre of content we cover. If I didn't have to watch it for that reason, though, I would have turned it off after a single episode. It's just to slow, and too stupid, to be worth following.