A Twinkle in the Eye of a Killer

For the longest time I didn't give Vin Diesel much credit as an actor. It's fair to say that his early works -- namely The Fast and the Furious and xXx -- gave him a reputation as a lightweight actor. The roles he took often didn't challenge him, sure, but those were just is high profile acting jobs. He was also the voice of the Iron Giant, he had a bit part in Saving Private Ryan, he was a sketchy stock trader in Boiler Room, and he played a heavy in Knockaround Guys, and he's great in these roles. It's easy to crap on the dude, but when you actually see him in action behind the scenes, or hear him talk about the craft, there's a dedicated actor (and super-nerd) there. 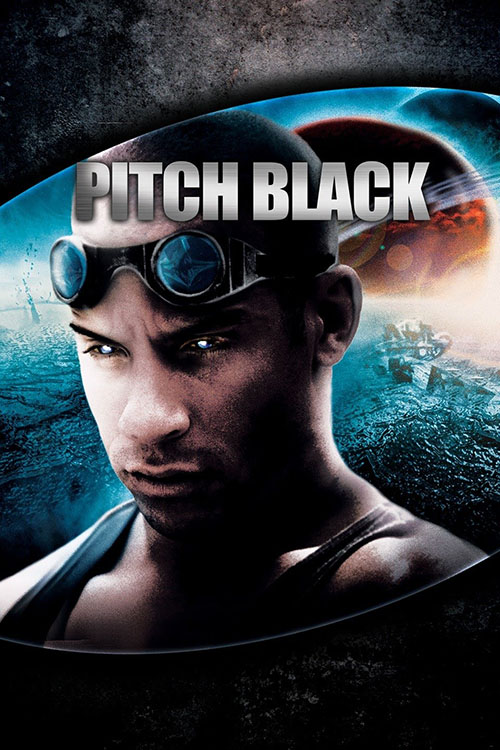 He's also, it should be noted, fantastic in Pitch Black, the low-budget horror film that would go on the launch the Chronicles of Riddick series. This first film wasn't meant to launch a franchise, that's pretty clear. But Diesel loved the character so much he kept wanting to make films in the series (which we'll cover here on the site), even going so far as agreeing to cameo in The Fast and the Furious: Tokyo Drift for sole ownership of the Riddick character and his future adventures. Everything in this series, from Pitch Black forward, is clearly a labor of love for the actor.

You can see why, too, in this first film because Riddick is just so damn much fun in his own evil way. Diesel doesn't often play truly bad characters, instead usually going for the troubled anti-hero (Dom in The Fast and the FuriousStarted as a film about undercover policing in the illegal street-racing community, this series has grown to encompass a number of different genres and become one of the most bankable franchises in the world.) or the sarcastic guy that ends up being the hero because what else is he going to do (Xander Cage in xXx). But for him to play a villain, well that was a turn the actor hadn't made before and, looking over his filmography, hasn't made since. This is one of his only out-and-out evil characters and the actor seems to revel in the role. He's mean, he's nasty, he's a real piece of work, but he's also the one survivor that can always be counted on. Riddick is, in short, and fantastic villain who just so happens to be the center of a whole series.

Here in this first film, Riddick is a smaller role, a co-star to the other characters who just so happens to steal the show. He's a prisoner, captured by bounty hunter Johns (Cole Hauser) and being transported on an interstellar freighter piloted by Carolyn Fry (Radha Mitchell). The ship, though, is struck by asteroid debris knocking the crew out of hypersleep so they can try and save the vessel. Unfortunately the ship, the Hunter-Gratzner has already gotten pulled into the gravity of a planet. This forces Fry to forcibly eject portions of the ship before the vessel crashes down, losing a number of the crew and quite a few of the passengers, leaving only a bare-bone compliment of survivors.

The planet they've crashed onto is a desert wasteland, one in orbit around three different suns, bathing the planet in perpetual, blazing sunlight. Also, in the crash, Riddick escaped and is off wandering the desert on his own. In their quest to find water the survivors find an abandoned work site, one where a group of geologist visited the planet and then left for unknown reasons. Soon, though, the crew figures out the reason: every 22 years the solar system goes into an eclipse as the gas giant in the system blocks all three aligned suns perfect, casting the system into, at least, weeks of pure darkness. And when the planet is covered in night, underground predators come out. The crew is suddenly under attack from night-monsters and the only person that can save them is the one guy who can see in darkness: Riddick. 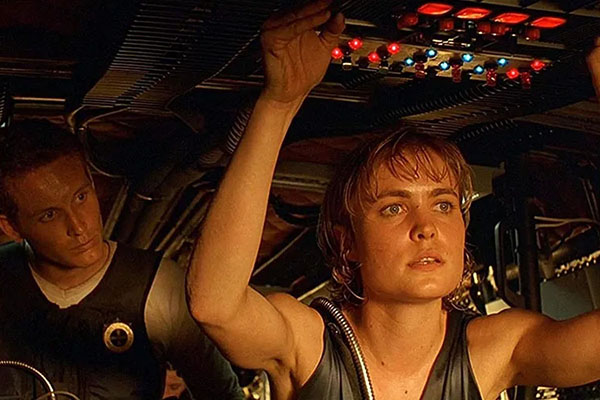 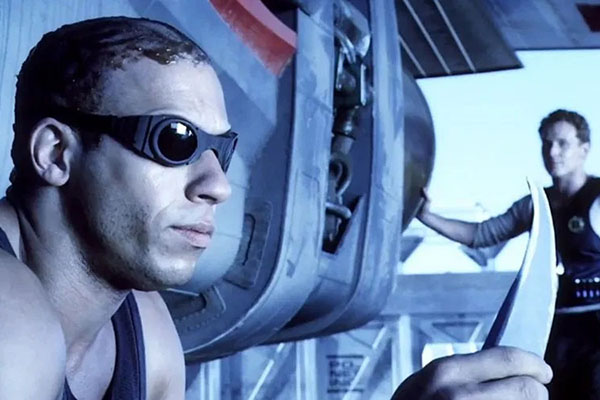 If rumors are to be believed, Pitch Black is loosely based on one of the many rejected Alien 3 scripts from back in the day. If that's true, it would have made for a very interesting, and very different, future for that franchise. Instead of the xenomorphs remaining the face of the franchise it would have seen Ripley fighting other threats, other dangers, as she continues to be the unluckiest woman in the world. If you squint at Pitch Black you can kind of see Alien 3 in there -- Ripley instead of Riddick, Newt aligning with the young girl Jack in Pitch Black -- and part of me wonders if that supposed plot line would have seen Ripley arrested by the Weyland-Yutani Corporation for her actions in Aliens.

Even if you ignore those possible origins for the film, there's still a lot to like about this movie. Despite being made on a threadbare budget for a sci-fi film, Pitch Black has a great sense of location, solid tech on display that gives you a real feel for this future. The film wisely works around its low budget with a simple collection of sets, low-tech solutions to many of the problems the crew face, and wisely hidden monsters for much of the runtime. The film makes a lot out of a little and gets the job done efficiently.

The best part of the movie is Riddick, of course, played with dark glee by Diesel. The movie does spend a lot of time building him up -- telling us past misdeeds, going on about how nasty he is -- and normally that would a faux pas, telling not showing. But the second Diesel is glimpsed, the background shading adds to his performance. He fills in the gaps, using our foreknowledge to craft Riddick into the properly nasty piece of work he needs to be. While there are monsters on the horizon, the film first uses Riddick in the monster role, letting little glimpses of him build the tension so that we're worried who he's going to kill and what he's playing at.

And then the monsters come out and the movie takes a hard turn. At that point Riddick becomes something of an anti-hero, using the rest of the crew for his survival in a kind of "enemy of my enemy" scenario. The film is pretty clear showing that he really only cares about himself, but if the other survivors manage to tag along, so be it. He is the center of the movie, both as the hunted and then the hunter, and his presence is what dominates and carries the film. Riddick needs a specific kind of actor to play the role and Diesel has just the right gravitas to pull it off. 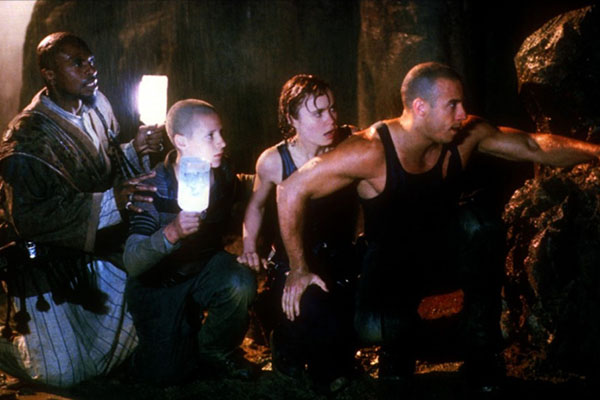 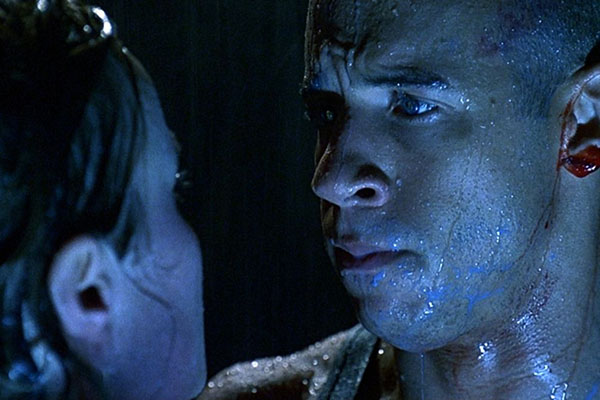 In comparison the rest of the cast is only okay by comparison. The best is Radha Mitchell as Fry as she at least has character development, feeling conflicted over the lives that were lost (and those she almost ejected from the ship to save herself). Hauser's Johns isn't much of a character, not even in comparison to Fry, although I think that might be the fault of the actor; they give him a number of ticks, character moments that should craft him into someone equally as nasty as Riddick, but it never comes across from the performance. Hauser is a dude. It's pity, too, because there's a great actress in the cast that could have played Johns so much better: Claudia Black, of Farscape fame. She's a great character actress who lends solid gravitas to even role she's in, and she does what she can with the underwritten Shazza (a prospector on the crew), but I would have loved to have seen what she could do with a meatier role, like Johns. Plus, recasting a male role with a female lead is a perfectly Aliens thing to do.

There are a number of fodder characters as well, none of which make an impression. Even two of the long-term survivors, Griffith's Jack and Keith David's Imam, don't really have much going for them. David is solid as Imam, a Muslim preacher who steadily loses each of his sons to the monsters on the planet, but there' no real character development for him -- he's already at peace, at the end of his story essentially, and the tests that "Allah" gives him by taking one son after another doesn't shake his belief at all. Meanwhile, Jack is just not a deep character. Griffith plays her well, but there's not a lot to her. She idolizes Riddick, wants to be a killer and... that's it. Again, an interesting speck of a character bu no growth.

The monsters, also, aren't that great. Conceptually they're fantastic, creepy and weird, and the fact that they come out of the shadows makes them a scary force in concept. The issue is the fact that the aliens are all CGI, and after nearly 20 years the CGI just doesn't hold up that well. The film wisely keeps them hidden in shadows (the concept of the movie becomes a strength in that regard), but when it has to show the creatures they feel a little fake, a tad hollow. I want a bit more from them even though I know this is a low-budget sci-fi film and the producers could only do so much.

Still, despite these flaws the film really does work. It's fast-paced and effectively scary at times, with a solid sense of place and a well developed mood. And, at the center of it all, is Riddick, being a bad-ass and taking names. Without that character, and Diesel in the central role, Pitch Black wouldn't work -- he is this movie, through and through. It's easy to understand why, then, the sequels to the film all follow Riddick: there's no one else as interesting or as necessary to the long-term series as this guy. It's rare to see the villain become the protagonist of a series, but here its essential. Without Riddick there is no series.