Having already gone through "The Gauntlet" previously on this site, it felt like eventually we'd need to go back and watch the previous season of the NetflixOriginally started as a disc-by-mail service, Netflix has grown to be one of the largest media companies in the world (and one of the most valued internet companies as well). With a constant slate of new internet streaming-based programming that updates all the time, Netflix has redefined what it means to watch TV and films (as well as how to do it). revival, "The Return". Just from the initial episode alone, there are already noticeable differences between the two seasons. Obviously, as this is Mystery Science Theater 3000First aired on the independent TV network KTMA, Mystery Science Theater 3000 grew in popularity when it moved to Comedy Central. Spoofing bad movies, the gang on the show watch the flicks and make jokes about them, entertaining its audience with the same kind of shtick many movies watchers provided on their own (just usually not as funny as the MST3K guys could provide). It became an indelible part of the entertainment landscape from there, and lives on today on Netflix., the movies the guys watch are just as terrible, sure, but there are some changes between seasons 11 and 12 that make me appreciate "The Return" more. 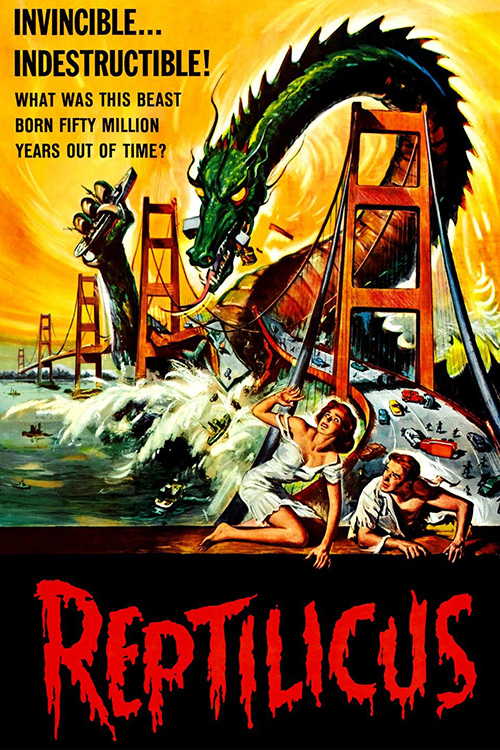 For one, it feels like the jokes fly more often, and with more success, in this early episode of the season. It feels like there's more energy to what the guys are doing in Reptilicus than in any of the episodes from season 12. There's an energy here, probably due to the success of the KickStarter that launched season 11 and the joy of reviving the show after more than a decade off the air. "The Gauntlet" was great, and had a lot of good moments and great gags, but it felt like it was missing the mile-a-minute patter the show needs.

The movie that kicks off this season is Reptilicus, a Danish kaiju movie made on a promise and a dream (and, clearly, without much in the way of an actual budget). If you've ever wondered why you hadn't heard about the Danish kaiju film genre, that's because (far as I can tell), there's only one film in that genre, Reptilicus, and it sucks. This isn't, in any way, one of the worst films MST3K has covered (it's no Manos, for example). It's just a bland, sub-par movie.

Part of the issue with the film is simply that it takes so long to get going. The movie has to introduce the monster, since this is the first time (and the last, of course) that Reptilicus ever appeared on film. Even taking that into account, though, the film simply takes way too long to get to the (supposed) good bits of the film: the monster carnage. Compare this film to the 1954 Godzilla where, in that film, the giant monster is hinted at from the very beginning. Boats are capsized, people die, and it's pretty clear from the outset that some very bad things are about to happen to Japan.

Meanwhile, Reptilicus spends the first two acts of the film dealing with a mysterious scientific find. Some miners, drilling for copper ore, discover that their drill is covered in blood and viscera. Assuming they've found a long-dead, frozen, prehistoric creature, the Danish miners send off for Danish scientists from the university at Copenhagen. The scientists then dig up a portion of the monster's tail for study back at their labs. There, after many long sequences in the lab, the tail eventually starts regrowing into a full creature and then, long after that, the monster eventually breaks free for some last act carnage. 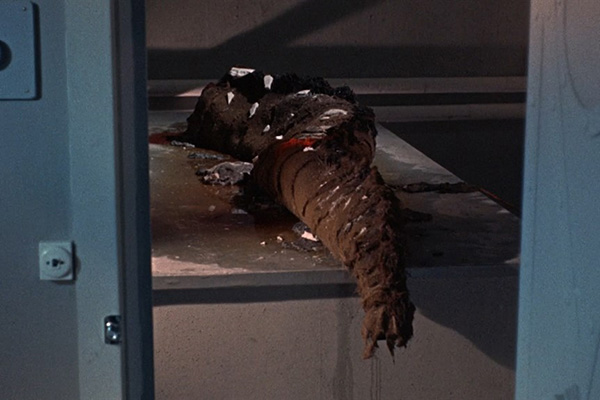 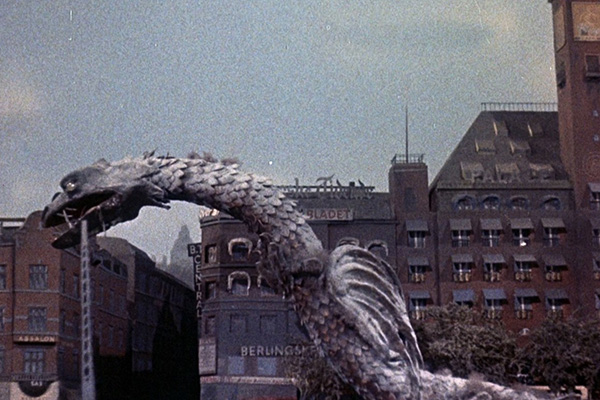 There's a key difference between hiding the monster from view to up the scares and simply not having a monster to show off at all, and Reptilicus falls into the latter camp. The monster comes about because of the folly of man, which seems like it's trying to parallel Godzilla in that respect, but while Toho's famous monster serves as a parable for nuclear war, all Reptilicus has to say is "don't trust Danish scientists." Maybe that's a good lesson -- I don't know enough about the Danes to say one way or the other -- but it doesn't make for a very interesting subtext (or text) to a monster film.

Perhaps this all could have worked out if the monster action itself was fun, but it's just not. Godzilla, famously, is a dude in a rubber suit who stomps around miniature sets of Tokyo to create the monster carnage. It's a little goofy looking, sure, but there's no arguing with the visceral sights of watching the monster really knock down (tiny) buildings. Instead of going that route, Reptilicus is a puppet, a single-stringed marionette that's then composited against real shots of nature and buildings. Occasionally they do use miniature sets for the puppet, but due to the limitations of the monster (it being just a puppet), trying to get it to knock down anything, or cause any real carnage, is near impossible.

Instead, the producers either have Reptilicus spew out poorly-composited in green acid (that magically wipes people away via a cut-wipe to a different scene), or they just cut out the middle man and show scene of devastation that Reptilicus supposedly caused (without us actually seeing the monster do the deed). It leaves all the carnage feeling airless. We don't get to witness the true carnage of Reptilicus so it all just feels so fake.

I'm all for other studios making kaiju films, they just have to be able to at least meet the bar of whatever Toho is doing at the time. You can't substitute a poorly animated puppet in place of a man in a suit. If your monster can't do the things you need it to do for good kaiju carnage, maybe instead of making the film anyway you should think about changing the monster. Reptilicus didn't, and it's all the worse for it. 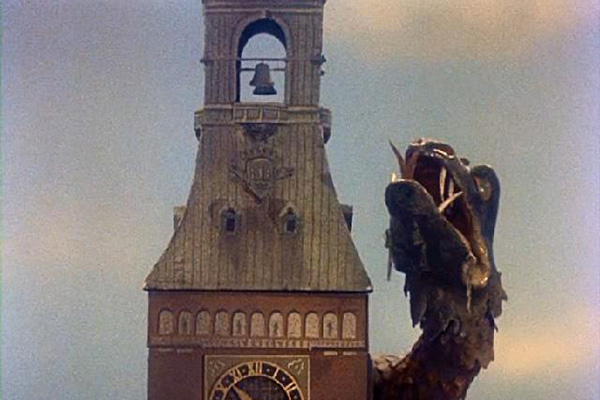 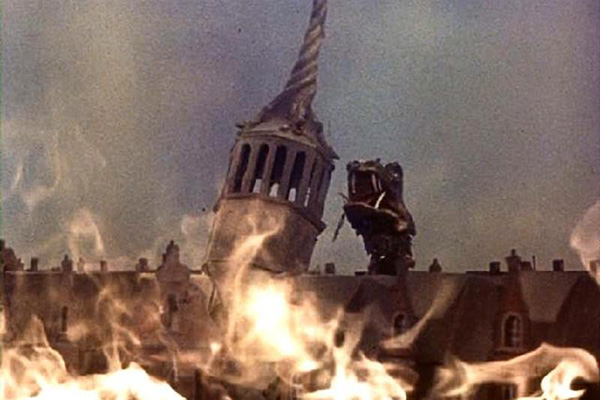 That said, the MST3K guys have an absolute field day with Reptilicus. This is a terrible movie to watch, but one of the absolute best MST3K episodes of the run (maybe not as good as Space Mutiny, but certainly well up on the list over all). The jokes really do come fast and often, and most of them are very funny. This is the kind of episode where you're laughing regularly, and they're good, solid laughs. The guys are able to take a pretty bland film like Reptilicus and make it appointment viewing. I've now sat through this version of the film twice and I could easily see doing it again, despite the fact that the movie is so terrible.

The highlight of the episode is certainly the musical number part way in. The boys rap (a terrible rap) about kaiju and other giant monsters, "Every Country Has a Monster", and it's glorious. This season gets a lot of credit for the musical bits scattered throughout the episodes, and this song sets the high bar for what's to come.

I watched through this season of MST3K when it first came to Netflix and enjoyed the hell out of it then. I will admit that the thought of going back to watch all the really awful movies a second time gave me pause, but if all the episodes this season are as good as Reptilicus (and I see to recall many of them were), then this won't be difficult at all. Enjoyable, even.

That said, even if the rest of the episodes from "The Return" sucked, this one episode would have still made the revival worth it. Now let's dive in and see how bad this season is going to get...