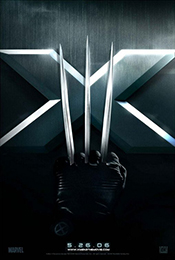 The socio-political landscape shifts though, when Worthington Labs, a chemical and medicine company, develops a cure for mutations (an inoculation targeted against the X-gene, the gene that gives mutants their powers). Some mutants want the inoculation, others think it's a terrible idea that never should have even been thought about, let alone developed.

The Brotherhood of Mutants, once again led by Magneto (Ian McKellen), of course want to destroy the lab where the inoculation is developed and make an example of the company. The X-Men are the ones best able to stand against these renegade mutants, choosing the fight on the side of the "law," wanting to save human life, not destroy it (damn lawful goods).

While all this is going on, Jean Grey (Famke Janssen) has returned. Somehow she survived her death at the end of the second movie -- her latent abilities saved her life, and also apparently turned her into a psycho homicidal maniac. Maybe that's the reason Professor Xavier -- Patrick Stewart -- shoved them deep within her psyche where she wasn't able to access them. Now that she has new (used?) and exciting powers to play with, she's unable to control herself, or even her own mind.

And so it comes down to all-out war; the Brotherhood against the X-Men, with Jean Grey caught in the middle.

The biggest issue X-Men: The Last Stand has is a lack of focus. The movie is so overstuffed with ideas and plot threads, nothing is ever fully explored. Take the Jean Grey plotline, for example. The end of the second movie promised the Phoenix Saga on film, and while Jean Grey does come back (a la the Phoenix), her new found powers are quickly explained away... and then Jean takes a secondary role to the other characters for most of the movie. I mean, come on! It's the Phoenix! This character had two hugely famous storylines in the comics (I didn't even read the comics and I know all about the Phoenix and the Dark Phoenix sagas). She could easily carry a movie on her own, but she was made into a secondary character.

And this is indicative of every character, plot thread, and idea in the movie. Characters are introduced, given a scene, and then barely heard from again. Angel is another good example, as he's introduced at the start of the movie, given a brief scene part way in, and then barely heard from until almost the end of the movie. We have the Mutant Cure (borrowed from the pages of Astonishing X-Men), but the creators apparently felt like this wasn't a strong enough plot line, either, so it's only tangentially mentioned until the last half of the movie.

Even now, thinking back over it, I can come up with major plot arcs the movie tried to address, but there aren't any major scenes that stick out as really tying to the storyline. The lack of cohesion in the story, with too many characters having too little to do, leaves the actors in a tougher position than the previous movies. By this point in the series, actors should be so comfortable with their characters that they should be like a second skin -- they should just be able to slide right in and become the characters. Sadly, this just isn't the case here.

Firstly, the two strongest actors in the series, Patrick Stewart (Professor Xavier) and Ian McKellan (Magneto) just seem bored. Sure, they showed up for their paychecks, but neither of them seemed to care as much as they did in the previous films. This means that other actors have to step up to fill the void left by these two powerhouses. Hugh Jackman (Wolverine) tries his best to carry the movie. Sadly, the Wolverine character is given the task of being a stand-in for Cyclops (James Marsden), who is barely in the movie at all (and I'm sure James Marsden was perfectly fine with this). Wolverine mopes a lot and cries about Jean Grey (who's dead, then back, then psycho, then not, then meh...). Sometimes he kicks ass, but it's fleeting and not enough to push the movie along.

More actors are thrown into the mix to try and prop this movie up. Halle Berry is given a much bigger role, with Storm becoming the de-facto leader of the X-Men (in Cyclops's absence). Sadly, Halle still hasn't really learned to act, making it hard to buy her as a leader (let alone as Storm). It also seems that Halle forces herself into every frame of the movie, making her very appearance frustrating to the viewer.

Famke Janssen as Jean Grey just seems lost as to what to do with her character. It doesn't help that the movie doesn't really know what to do with her, either. It's like the studio said "we have to have the Phoenix in here so we can sell toys, so you better put her in." So they did, but no one could really explain to Janssen why, or what, her character was meant to do. So they just let her wander around acting nutty and sometimes filmed her.

One bright spot in the cast is Kelsey Grammer, who gets to play the fan-favorite character Beast. Grammer brings pathos and strength to his character for the few fleeting scenes he was in. Honestly, the movie could have focused on just the Mutant Cure, with Beast working to find a way to stop it, and it would have been so much better -- I have faith Grammer could have carried that film. Of course, the movie would have had to focus long enough for a story like that to develop, so plainly I'm asking too much.

So who's really to blame for this mess of a popcorn flick? Some blame plainly lies with the director, Brett Ratner (the man best known for directing the Rush Hour series -- what an accomplishment). This movie, with everything it had going on, and all the various ideas that had to be cohesively melded, was obviously too much for him to handle. Some blame has to go to the writers, Simon Kinberg and Zak Penn, for trying to do too much and accomplishing too little.

But really, most of the blame has to go to the studio. This was a tent pole movie, a big flick that would carry Fox Studios through another year. One can assume they wanted to have as much control over it (once Bryan Singer left) as they could to ensure it had money making synergy -- that means the bean counters got involved, and it was less about making cinema and more about making money.

It's hard to recommend this movie. It's just not anywhere near as good as the first two films (especially the second one). Fans won't care for it, and newbies to the series won't really understand it, as there's just too much going on to care. There's no reason for anyone to watch it, ever.