A Dive Right Off the Building

How cinematic does a game need to be before it can be made into a worthy film? Put another way, does a game need to be epic in scope and style to actually convert over well to the big screen? It's a question I wondered about while watching 2016's film adaptation of Assassin's Creed. Although I wasn't a fan of the game series (finding the first game to be rather repetitive the deeper into it you got) I could appreciate the style and scope that the games were going for. Cool dudes in hoods, with weapons, doing parkour around ancient cities. What's not to like about that? It's epic and stylish and you'd have to think it would make for a similarly epic film. You can practically see the cut-scenes they'd make for it. 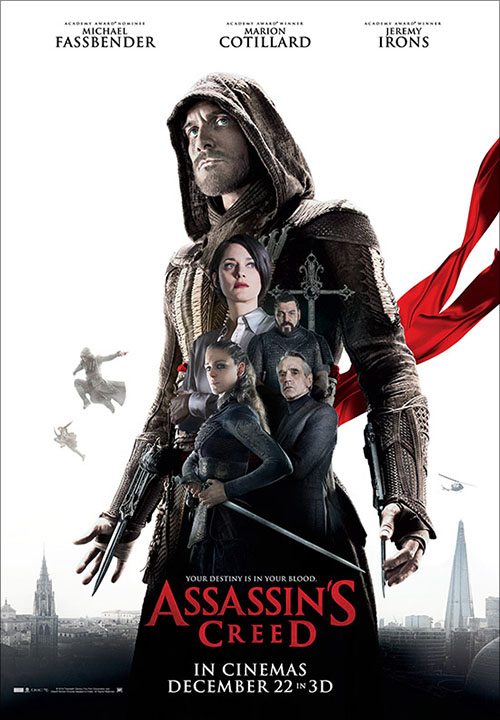 And yet, watching the actual Assassin's Creed film, I was struck by how badly the creators of the movie managed to miss the mark. It's cool dudes in hoods, with weapons, doing parkour through ancient cities! How could you fuck it up?! The biggest strike against the film is that, despite all the basic elements of the games that should translate well to the screen, making for a frenetic action experience, Assassin's Creed ends up boring! There's no greater sin in an action film than that.

You know things are bad when a film not only has to open with a text crawl to explain the setting but then no less than three prologues to get our main character, Callum "Cal" Lynch (Michael Fassbender), into the movie. Cal, for reasons not entirely explain to us in the film, is a death row inmate sentenced to die for someone he killed (we don't see this event which, frankly, would have done more to fill in his character than the three prologues). His death, though, is faked and, when he wakes up the next day, he finds himself at the Templars' Abstergo Foundation. The Templars (yes, those knights) are apparently looking for a McGuffin, the "Apple of Eden" which, as we're told, will grant the Templars the ability to control mankind and wipe away free will. Heady stuff, I guess.

Cal, it should be noted, is the descendant of an Assassin, from the Order of Assassins. The Assassins work by darkness to protect the light, and they have been the main opposition throughout the centuries against the Templars. Cal, though, doesn't trust the Assassins, and really doesn't care about his birthright or anything to do with the Apple of Eden. However, the head scientist at Abstergo, Dr. Sofia Rikkin (Marion Cotillard), brings Cal to the Animus, a machine that can tap into his genetic memories. The machine lets Cal relive the past life of Aguilar de Nerh (also Fassbender), the last Assassin to see the Apple of Eden before it was lost, never to be seen again. With Cal's help the Templars can regain the Apple, and if he does help they'll give him his life back. Now Cal has to decide if he wants to help these people or become an Assassin, like everyone in his lineage before him.

I think part of the issue with the film is the fact that what the Templars and the Assassins are fighting over, an artifact that can wipe away free will, is both too vague and too big to really grasp. What does the Apple do exactly? How does it work? Does anyone actually know? This is never established, and in fact any actual details are elided by so that characters can talk about finding the Apple. "It's too powerful, we have to keep it out of their hands!" we hear. "We need the Apple to continue our plans! We're running out of time!" they say in response. We know everyone is fighting over it, but beyond vague concepts nothing is every shown about what the Apple can do, leaving it just this weird little treasure that looks good on a shelf. Hard to understand why people are fighting over a glass paperweight, honestly. 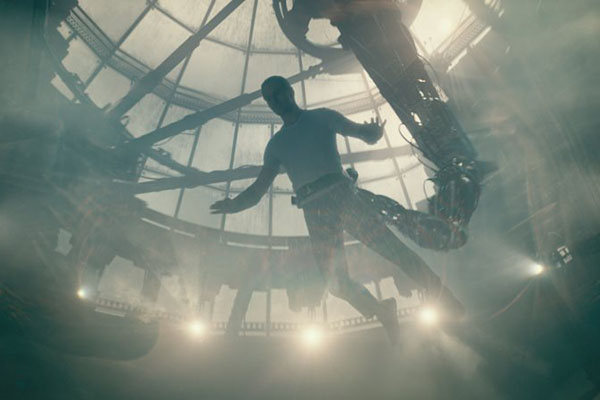 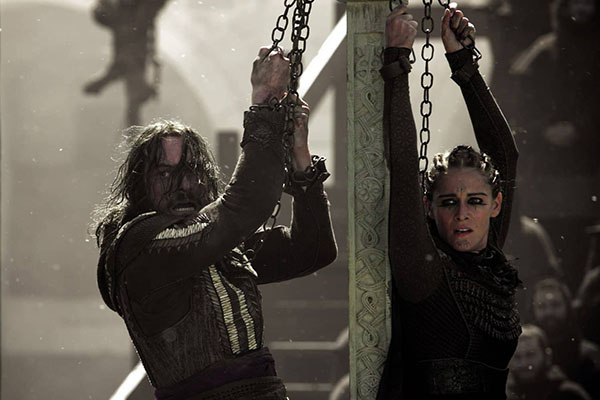 Let's also address, for just a brief moment, how ludicrous the whole concept of this movie really is. A magical McGuffin, presumably from the Garden of Eden (if you believe in that kind of thing) is protected by assassins and coveted by the Knights Templar. And, bear in mind, somehow the Templars are still up and active in modern times, seemingly even more powerful than they were back then, and even then they acted as a de facto government in their own right. While, sure, the Templars were somewhat powerful in actual history, and there were assassins protecting the Holy Land, everything else about this whole plot line is absolute drivel. It doesn't make sense in the moment, and while it might come from the video games, it probably needed a fair bit of massaging to work on the big screen (like, you know, a complete rewrite).

This is where we get into the trouble of adapting a story to the big screen: in a video game, a plot line can be bat-shit insane and as long as the game distracts you with constant action you really don't have time to think too long about it. "You need me to go kill dudes because I lost a powerful treasure? Sure, let me at them!" That's all we need. But in a film all we have are characters discussing the plot, going on about the artifact, making a big deal about it. We have nothing but plot to go off of so it's harder to distracts us for the stupidity of the story.

Not that Assassin's Creed even tries to distract us with pretty-pretty action. Once we get past the text scroll, and the three prologues, we then spend a long time at the foundation, and in the Animus, having characters talk at us. We don't actually get a good action set piece until 50 minutes into the movie, right at the halfway mark. The games are smart enough to make us play through an active prologue, fighting dudes and learning our skills. The movie though just yammers on and on, making for one of the slowest, longest intros to an action movie I've ever seen.

Bear in mind, when the action picks up it is actually pretty great. There's a big epic fight from an execution stage, then across the rooftops of an ancient city, all to then come to a big fight at a church, before another chase after that. It's a lot of parkour, a lot of fighting, and a hell of a lot of people dying (as bloodlessly as they can because this is a PG-13 movie). This is easily the highlight of the film, but it comes in the middle of the movie. Great for what it is, and this whole piece leads to one part of the fight after another, taking up a good 30 minutes of the movie. It's practically the non-stop action I was looking for... and yet, then the film lands with a thud (like an assassin leaping for a bale of hay and missing). 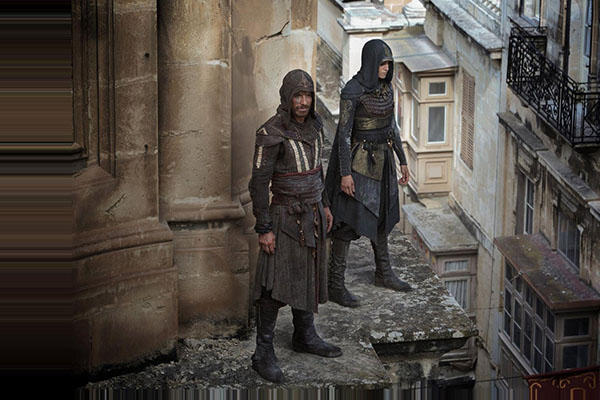 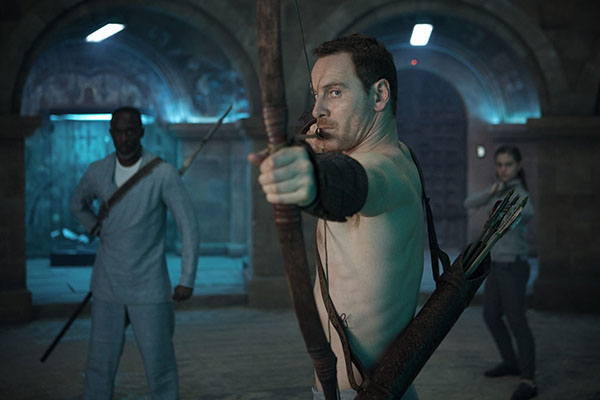 Remember, the whole point of this movie was that the Templars wanted the Apple and the Assassins were trying to stop them from getting it. Well (spoilers) they fail, with Cal giving up the memory that leads them to it. However, then Cal joins with the rest of the Brotherhood of Assassins and goes off to stop the Templars. Good so far. However, what should have been an epic sequence, with the Templars giving their speech and then opening the Apple, leads to simply a bit of a light show, no loss of free will, and then Cal kills the leader and takes the Apple like it's nothing. No big last fight, no epic sequence, and still no reveal about what the damn Apple actually does! The movie ends, effectively, with a wet fart.

The movie did okay at the Box Office $240 Mil against a $125 Mil budget. That's a credit to the stars in the film, who do at least try to make their characters interesting, and what action there is in the film that's watchable. But the fact that the film is so slow, takes forever to get going, and then has one of the worst endings I've seen in some time, goes a long way towards explaining just why this film failed to really hit at the Box Office. Critics were disappointed, fans were disappointed, and any plans for a sequel were quickly scrapped.

The Assassin's Creed games are one of developer Ubisoft's top franchises, and this movie came out at the height of AssCreed fever. The fact it couldn't slam it at the Box Office shows just how badly this film bungled the landing (again, like a body missing the hay). This was a no-brainer property that should have delivered non-stop action in cool, ancient locations. The concept is so simple and it would have been cool to see it done right on the big screen. 2016's Assassin's Creed does nothing right and, due to its total failure, managed to sink any aspirations of turning this story into a big movie franchise.