All the King's Horses...

I am not a big fan of the Kingsman films. Oh, the first one, The Kingsman: The Secret Service is an, at times, interesting lark with some fun ideas, but it's overall plot gets pretty muddled and the entire last act is utterly idiotic and forgettable. The sequel, The Kingsman: The Golden Circle, is an utter chore, equal parts overwrought and tedious without anywhere near the spark of the first film. It's should say something about my preferences that both of these films exist within the comic book adaptation genre, and I own copies of them both, but I still have yet to do proper reviews for them. They just aren't worth the effort. 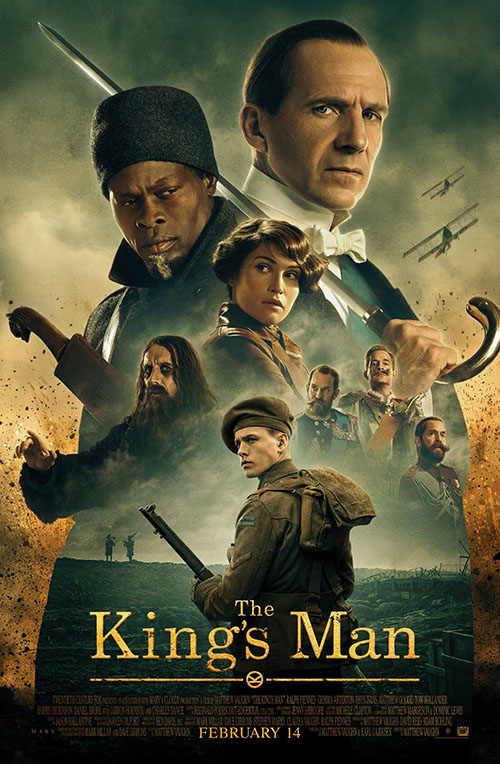 Honestly, I was surprised to see that the franchise was still going considering the savage beating the sequel received from critics (and it was just a dreadful movie). However, The Golden Circle did manage to pull in almost nearly as much as its predecessor on a similar budget (easily clearing $400 Mil at the Box office), making it a solid film ready for further continuation. However, there is the adage that you're only as good as your previous film, so it could be that the sequel was able to turn $400 Mil because the first film manages that feat and not because The Golden Circle was actually a good movie. That would seem to be the case as fans judged the new continuation, and prequel to the franchise, The King's Man pretty harshly, with the film only turning $124 Mil against a comparable budget. Maybe people are getting smart to the shallowness of this franchise.

If that means we won't have to suffer through more films in this franchise after The King's Man, then I'm all for it because this prequel is just such an awful chore. If the previous film was overwrought and stupid, only managing to achieve the silliness of its predecessor without any of the wit, this new film manages to even lose the gleeful silliness. Turgid is a word I'd use to describe this film and it 131 minute run time. It's slow, i's painful, and it takes absolutely forever to get anywhere at all. I can kind of see what writer/director Matthew Vaughn was going for with the story but it's absolutely mired in self-serious excess. This should be a gleeful series extension but, instead, might just be the death knell for the whole franchise (please and thank you).

In The King's Man we're introduced to Orlando, the Duke of Oxford (Ralph Fiennes), a medic working for the early Red Cross in African Wars (during the age of British Imperialism). During a routing visit to a military camp a sniper comes out of the weeds, shooting at all the officers at the camp. Orlando, who was there with his wife, Emily (Alexandra Maria Lara), along with his son Conrad (played as a boy by Alexander Shaw), can only watch helplessly as his wife is gunned down. His manservant Shola (Djimon Hounsou) kills the gunman, but the damage was done; his wife was dead and his son had to watch. As she lay dying Emily made Orlando promise to keep their son far from war.

Cut to a decade later and Conrad (now played by Harris Dickinson) wants nothing more than to join the war effort. Franz Ferdinand was assassinated and the countries of Europe has been sucked into a Great War. Worse, it all seems to be orchestrated by a secret cabal of assassins and thieves. Orlando wants nothing more than to keep his headstrong son out of the war, but at every opportunity Conrad puts himself into danger. To find who is behind the cabal, and to keep his son happy, Orlando organizes a secret organization alongside Shola and his household nanny, Polly Watkins (Gemma Arterton). They create a network of household spies among the maids and butlers of high ranking officials, get their intel on the down-low, and begin working to keep the world safe, no matter what it takes. 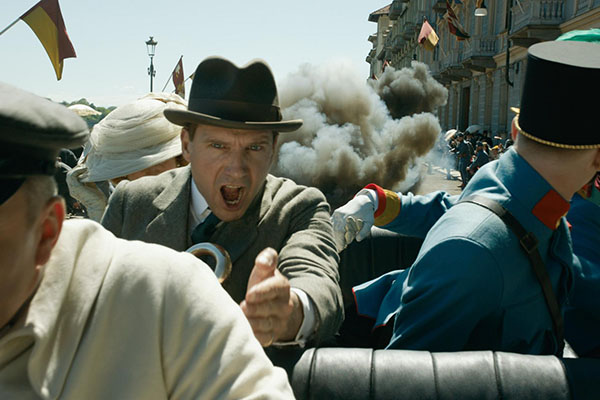 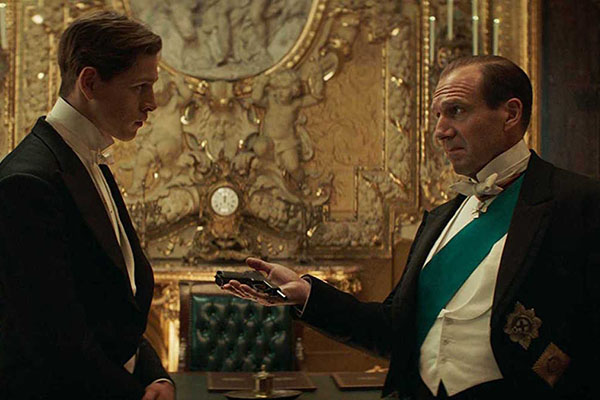 There are a number of issues with The King's Man -- pacing, stupidity, mythology -- and all of them keep the film from being good (or even passable). The biggest issue, though, is certainly its tone. Despite how ludicrous the film is it acts so serious about everything it does. War is hell, yes, but this film acts like every scene is sacred as a World War I documentary while having action as over-the-top as Wonder Woman. Nowhere is this more evident than in a sequel set in the trenches at the Front, with you Conrad put on a mission to cross the line and save some important intel. It's filmed with a tone like a leaden drama while explosions and gunfire hail everywhere. it has such a confused tone that by the time tragedy actually strikes you wonder if its real or not, dreamy and stupid as the sequence eventually appears to be.

A lot of this self-seriousness could have been fixed if the film managed to maintain any kind of logic. The first film in the series posited, "what if all the world leaders were secretly controlled by an evil cabal," and while that twist was ludicrous and stupid, the modern setting at least made it so we could buy it (without major suspensions of disbelief). Here, though, we're not only playing in the past but in a very specific, and well documented, period of history. The alternative version of history presented in the film is stupid, not lining up with anything close to actual reality. It requires a much more massive suspension of disbelief to buy into anything going on, to the point that you have to stop caring about everything just to get through the film.

Beyond that, the movie also tries to lay the groundwork or the mythology of the later films. This can't just be a film about one man that decides to create a secret service and naturally stumbling on everything that eventually happens in the later films (which would be annoying enough but, okay). No, instead so much of what we came into this movie to learn -- how the network was setup, why they chose the tailor shop as the HQ, how the Arthurian names for all the agents was determined -- is already solved before the movie even rolls. Want to see them setup the spy network? Too bad, that happened off screen. Want to see why a tailor shop makes a good place to have covert meetings? Pity, because those meetings are already happening before the film even begins. For a prequel that was supposed to fill in the why of the Kingsman mythology, none of that actually gets a solid, on-screen explanation. Everything just happens, so there.

Even this I could accept if it was in service of keeping the runtime down, but at over two hours and ten minutes this film manages to drag so much of its story out. it takes us a good hour before we get the first covert mission, an assassination attempt on the life of Rasputin (Rhys Ifans, the only person in this film to recognize, and have fun with, the kind of film he's in). And then it's back to self-serious turgid pacing for another forty-five minutes before a proper Kingsman style mission occurs. For an action spy adventure this film is light on action or spies but it's very heavy on overwrought characters blatantly telling each other everything. There's no flow, no rhyme or reason, just a bunch of shit that happens very slowly and then the movie ends. 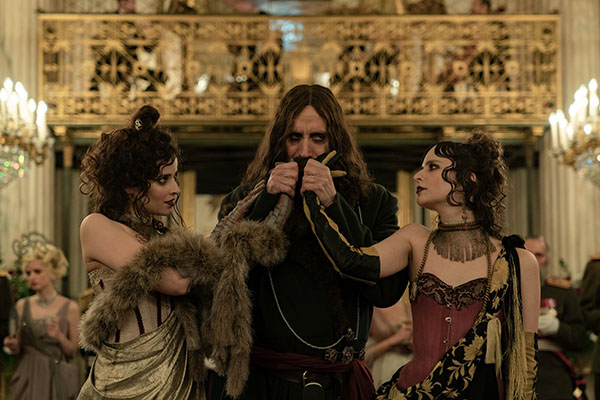 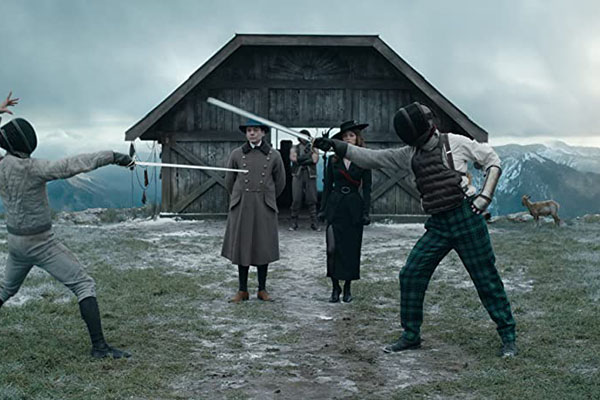 Frankly, the prequel commits the biggest sin any prequel can make: it fails to adequately fill in the details about a period in its franchise's history. The point of a prequel is to say, "here's something you need to know so let's flesh it out into a proper story." By the end of The King's Man we understand as much about the formation of The Kingsman agency as we knew from a few snippets of story in the first film of the series. This film is an over-long, under-baked prequel that fails to deliver anywhere near a single iota of fun or action from The Golden Circle, let alone even getting close to The Secret Service. This is, in short, a bad movie that really never should have been made at all.

If we're lucky production company 20th Century Studios (i.e., Disney) will look at the returns of this prequel and decide that any further movement on the franchise is ill-advised. Otherwise would could have to suffer through not only another sequel in the series but also further spin-offs. I don't think audiences deserve to be bored like that, thank you very much.