Is it possible to replicate the magic that is the original Battletoads? After that game became a massive success Rare, and publishing company Tradewest, suddenly knew they had to crank out a whole franchise. But how to do that in a short window of time? Well, you gotta iterate on what was working and just keep cranking stuff out no matter what. That seems to be the order if the day if the sequels that followed are any indication.

The first of the sequels to follow was the Game Boy edition, also called Battletoads even though the two games featured different stages. That game came close to replicating the glory (good and difficult and bad) that was the NES game), but it also certainly felt like a Game Boy game. What wasneeded wasaproper sequel, a bigger sequel for the home console market. Unfortunately the companies couldn't just put another game out on the NES as that console was already getting replaced by the SNES and no one cared about the NES anymore (this is hyperbole as people were still playing the NES for years, but sales had slowed). No, it was time for an upgrade.

Enter Battletoads in Battlemaniacs, a game that promised to update the Battletoads formula for the 16-bit era. In reality what it did was take the first game, steal bits and pieces from it, and then crank out a very same-y, very short sequel on the 6-bit platform. For fans of the original game this had to feel like quite a bad package; this SNES edition was shorts, simpler, and less engaging than the NES edition. That said, if you never managed to get past the Turbo Tunnel in the NES edition (which was most of us) then you'll get just as far here and think the game is just as detailed this time around: the Turbo Tunnel returns and it probably is the point where most gamers threw up their hands on this game, too.

The best that can be said about Battletoads in Battlemaniacs is that it is pretty. Although the game doesn't push the bounds of the SNES hardware to any great length it does feature big, chunky spites that are double the size of their NES brethren. Everything is crisp and clean, with more colors and bigger sprites. For the first few stages it does feel like Rare put a nice bit of spit and polish on the game. And, hell, if you could get to the bonus stages those features some pretty slick looking mirroed graphics as the Toads slide across a shiny surface. It had small bits where it did meet the hardware and used it well.

The issue is in the game play, almost all of which is recycled from the NES (and but "almost all" we mean "all"). The first stage of the gameis a straight beat-em-up. This is then followed by a verticle tower where the Toads glide down, taking out flying enemies and wall-mounted snakes, all before heading into the Turbo Tunnel. This is then followed by the Snake Pit, a version of the Disc Chase (although this time it's a mono-slider on a rickety rollercoaster setup) and the Rat Race. All the big ideas of this game are abso0lutely recycled, verbatim, from the NES game. Nothing here feels new at all. 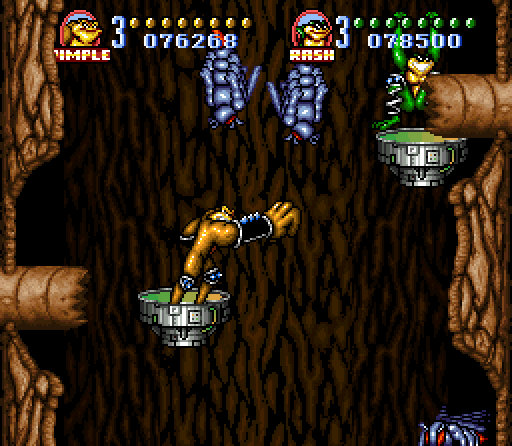 Worse, the game feels desperately short. In comparison to the original title with over a dozen stages, this SNES game tops out at about eight. Time wise the original game would have taken most players that knew what they were doing over an hour to beat. By cmparison this game could be cleared in half that time. he content proposition simply wasn't here, as if Rare looked at the game and said, "no one ever played most of the stages so why even bothering including more?" So they didn't.

That is, of course, one interpretation. Another could have been that the game as rushed out the door as quick as could be. This seems possible not only because there are so few stages, but also because there's even less boss fights. Most stages would end in the original game with sme kind of fight or another, something to make you work for the end and give a proper finish to each of the challenges. Here most stages end with the Toads simply reaching he end and then a hard-cut as if to say, "oh, you got here... oh, okay."

I think what lends even more credence to this idea, that the game was rushed out the door, is the fact that it's actually pretty easy. Yes, the Turbo Tunnel is obnoxious as always, but the rest of the time the game is amazingly simple to get through. There are less enemies, less traps, less challenges than then original NES game. Even the Game Boy edition felt like more work and that game was a cake walk in comparison to the NES title. Looking up the development of the NES game you'll find reports from the developers that they'd have people play the stages, watch them in action, and then purposefully go in to make them harder so that fewer and fewer people could beat the challenges. It doesn't feel like they had that kind of absuive development cycle here. At some point everyone said, "hey, there's the deadline," and tha was that.

But that gets us back to my initial question: how do you replicate the magic that was Batteltoads/span>? You have to put in effort, that's for sure. Say what you will about the original NES game -- it's an asbolutely nightmare to play, one that actively fights you the whole time -- but there was satisfaction in defeating its many, many challenges. The games that have come since have done less with their titles while also easing back on the one thing people thought they could rely on: the abusive challenge. Without that you have a platformer with only okay controls, a few recycled ideas, and not much else. 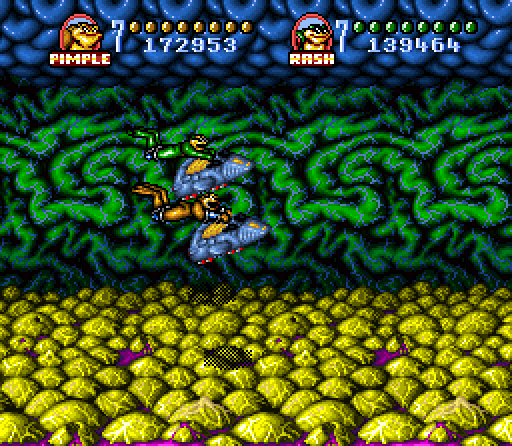 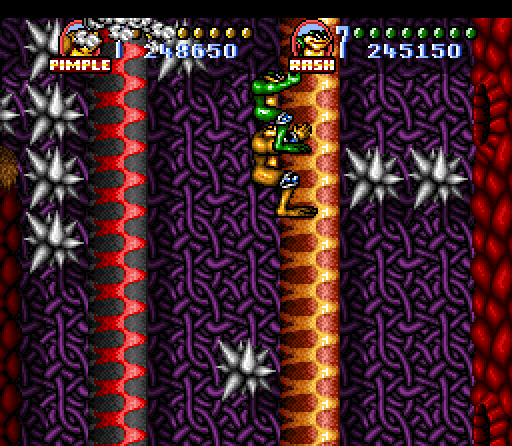 Perhaps that's why the Battletoads failed to stay relevant after their first release. That NES game was lightning in a bottle and the longer the series goes on it becomes pretty clear that Rare didn't really know how to capture that again. The Game Boy edition was decent but the SNES version is hardly worth playing -- all its best ideas were done better, and more elaborately, in the NES version. And with only two direct sequels (and one much later reboot game) there's very little the series could do to truly expand on its setting. It's really starting to feel like the Toads should have stopped at just one entry.