Did we really need a sequel to The Mechanic, the 2011 Jason Statham-starring remake of a 1972 action film barely anyone remembers? I recognize I often ask that question about sequels, but in this particular instance I really want to know why the studio, Millennium Films, felt that the 2011 film needed a sequel five years later, especially when the original one only made a modest $76.3 Mil against a $40 Mil budget. Were the home video sales really that great to make financing a sequel worthwhile? 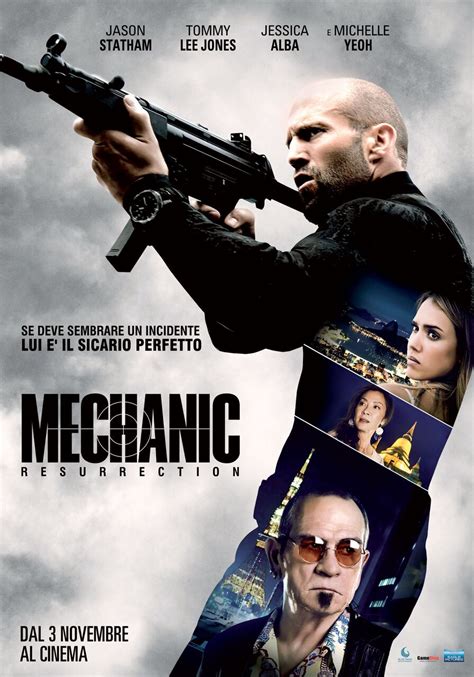 But then, what do you do with a character like Statham's Arthur Bishop once he's going through one adventure? In the original film he was a stoic, barely animate guy just going through the motions of killing people as a very well paid and highly skilled assassin. I blame many of the issues with the original film on director Simon West who didn't seem to have a clue how to get deep performances out of his actors (or simply didn't want to), but it still didn't leave a lot of room for character growth or story when, in essence, Bishop is already at the end of his story, doing one last kill before taking the company he works for down and disappearing, never to be seen again.

This is an issue the sequel never really answers properly. Hell, the sequel hardly justifies its own existence most of the time -- it's not really a retread but it hardly feels like it exists in the same universe as the previous film. It's cheaper looking, it's somehow dumber, and it's direction is even worse than in the previous film. It does have better stars, doing a much better job conveying their thinly written characters, but at the end of the day this is a film that didn't need to exist and, likely, will wipe itself from your memory once you're done watching it (I nearly forgot I'd even sat through it for this review and I just watched it yesterday).

In the film, Statham's Bishop is living, under an assumed name, in Rio, doing his best to maintain a low profile and never be seen by anyone that may be after him. Unfortunately for him there's one client that really wants Bishop back in action: Riah Crain (Sam Hazeldine), an old associate of Bishop's from back when they were growing up. Bishop got out of his life on the street but failed to take Crain with him and, for some reason, Crain holds a grudge (even though he's also a multi-billionaire living the high life and clearly did okay for himself). He wants Bishop to kill three men -- gun-running warlords in Africa, Australia, and Eastern Europe -- but Bishop is out of that life and flatly refuses.

After Bishop fights off Crain's men in Rio, he bails on the city and takes a long trip over to Thailand where he has another friend, Mei (Michelle Yeoh). Mei runs a small island resort and she's kept a hut aside for Bishop as a safe house of sorts. While Bishop gets his feet under him, though, a woman comes to the island, seemingly being abused by her boyfriend. This woman, Gina Thornton (Jessica Alba), is actually bait for Bishop, a honey pot of sorts as she's supposed to get Bishop to fall for her. Then, when Crain "kidnaps" her Bishop will have to do the jobs for Crain. Except, even after knowing this, the two do fall for each other and she really is kidnapped so Bishop really does have to do the jobs. It's time to get to killing to save the woman he loves (but barely knows) before everyone ends up dead. 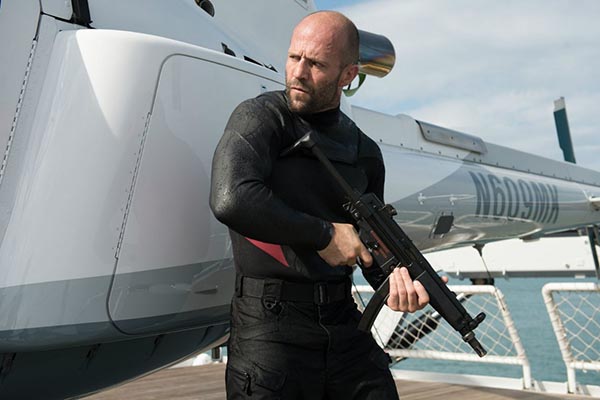 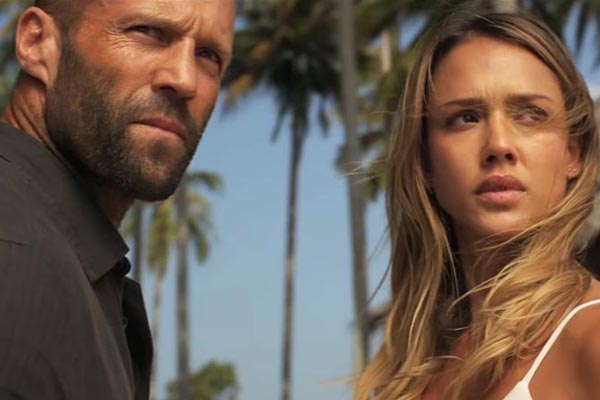 Okay, so, first off: this plot is stupid. The narrative has to twist itself into knots to justify all the moves the story goes through just to make it all work. Bishop is a man without any connections to the outside world (the only father figure he had having been killed, by his own hands, in the previous film). The film has to setup his new status quo, blow it up, give him past associates, throw a girl into the mix, and create this elaborate setup all to finally get Bishop to do what he does: kill people in elaborate and well-planned ways. While I get what the studio was going for -- give Bishop a love interest so we can hook romantic asses into the seats -- it doesn't work here. There's too much setup, and not enough time for Bishop (a reserved man by any measure) to become attached... and yet somehow he's supposed to and we're supposed to care? Not hardly.

There were ways to make a version of this narrative work, mind you. Instead of inventing some bad guy with a grudge the film could have simply had an opening with the bad guy saying, "I need the best killer in the world," and his people could have tracked Bishop down. He's a man that gets what he wants and he wants Bishop, and will kill everyone around Bishop to get it done. As far as motivating Bishop, we didn't need a hackneyed love interest angle. Maybe Bishop had a sister he wasn't close too, calls her once a year but otherwise has remained distant because he's a distant guy. But just because he doesn't talk to her doesn't mean he is going to allow anyone to harm her. Boom, the story is solved without needing 45 minutes of twisted, stupid setup.

Hell, if the love story is really needed, why not just take the five year time jump and give Bishop a wife in the interim. We could see him and her (and maybe their kids) living quietly in Rio before all hell breaks loose. That solves the problem of setup as well and it requires absolutely no explanation. It's been five years, the man is allowed to settle down and have a life. This story is incredibly dumb in all respects, but there were ways to salvage it.

In fairness to the film, once the movie gets past the dumb setup and just lets Statham do his thing, it does pick up (at the very least I didn't feel myself getting dumber the longer it went on). There are a couple of decent set-pieces, action-wise, in the film that are worth watching. The best is certainly the second of the three killings, where Bishop ends up scaling a building to an overhanging pool so he can destroy it with the target inside. That one is an absolutely vertiginous affair that made me feel all the sick action of it (even if, realistically most of it was filmed against a green screen. 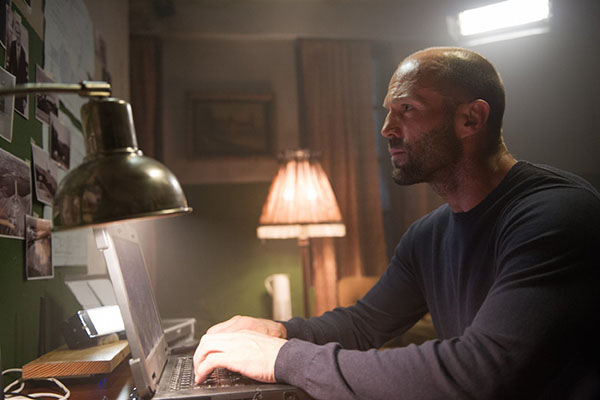 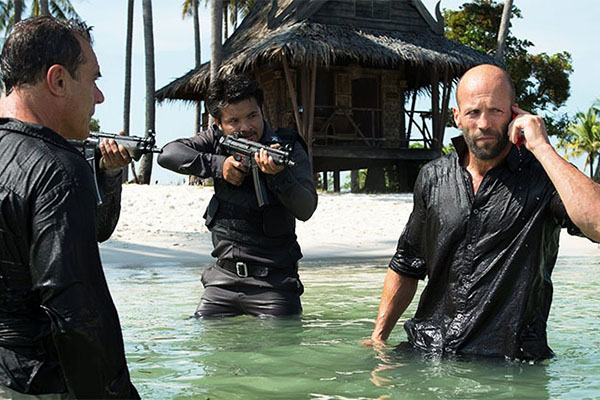 And the actors all do fairly well with what they're given, especially once they can get having to spout the awful early-film dialogue. Statham is Statham, but at least he seems to be having more fun here. Alba is also pretty good here, even if she's most reduced to being a damsel in distress for two-thirds of the film. Then cameo turns fro Michelle Yeoh and Tommy Lee Jones help round out a colorful cast. No one was going to win awards here but at least they could all sell their dialogue and make convincing, and fun, characters out of their material. It's watchable, if barely so.

The big issue is that, even by the end of it, I just didn't care. There's nothing to latch onto here and no reason to get invested. Aside from a couple of decent action moments this film is more of a chore than something fun to watch. It's absolutely disposable, barely functional popcorn fare. I think Millennium was expecting this to become a franchise, a sort of thuggish Mission: ImpossibleIntroduced in 1966, the original Mission: Impossible featured a team of agents (with varying skills) heading out into the field to solve puzzle-box like cases on a weekly basis. This simple concept spawned a long-running series, a second series in the 1980s, and a hugely successful movie franchise starring Tom Cruise that continues today., but while this sequel did better at the Box Office ($125.7 Mil haul), it still failed to really gain any momentum. I suppose it has been another five years and we could suffer yet another of these films any time now, but I think we're saved any future failures from this series. Twice, surely, was enough.