Hit Him Where It Hurts

After all the YA dystopian sci-fi we covered over the last couple of weeks it felt like we needed a nice little palette cleanser for the end of "Sci-Fi Saga September" (especially since we're not at the start of October). So, as a change of pace let's look as a big, dumb, crowd-pleasing family flick: the 2011 robot-boxing film Real Steel. This is a movie I skipped in theaters because it looked dumb and heart-warming and lowest common denominator-serving. I'm not above watching a dumb flick but it has to be sly about it; a family film dressed up as a sci-fi film just isn't for me. Normally. 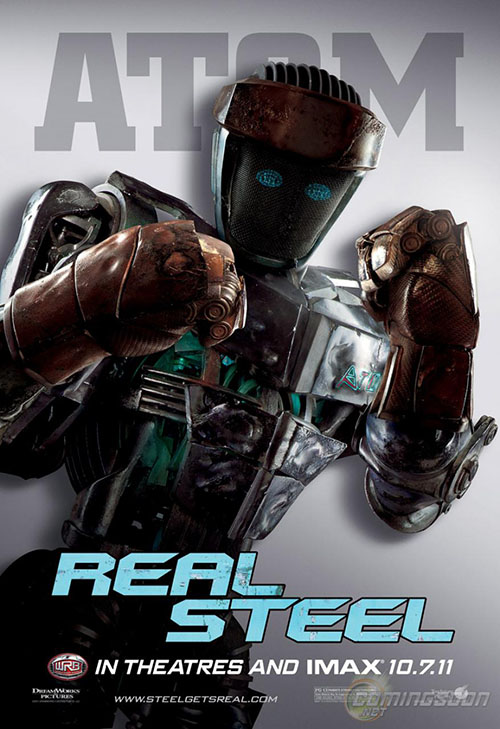 The thing is, though, that Real Steel is infectious. It's all the things I described it as above: it's loud, its stupid, it's purpose built to tug at your heart-strings and make you weep for the little kid and he gets his family back (his family, in this case, a down-on-his-luck deadbeat dad played by Hugh Jackman). It's a movie that, generally speaking, I'd never ant to see. But the film got Hugh Jackman in the lead role as the dad and damn if that man doesn't have charisma in spades. He can sell all the dumbest shit possible and I'll still watch it (I've watched X-Men Origins: Wolverine twice and I loathe that film). It's fair to say that without him in this film it would be unwatchable, but the man takes family shit and spins it into gold.

When we meet Hugh Jackman's character, Charlie Kenton, he's working the country fair circuit, going from one event to the next with his robot, Ambush, fighting other bots for cash. He's tens of thousands of dollars in debt to multiple people, and constantly running from every bad bet he makes. He loses Ambush when the robot, set in a fight against an actual bull (in a scene that feels too much like animal cruelty no matter how much CGI might have been used), gets destroyed in the fight, Charlie bails on the fight promoter Ricky (Kevin Durand) before he has to pay up twenty grand he does have. Now, short a robot to fight with and no money to speak of, Charlie needs a miracle.

He break comes, in a way, from his son, Max (Dakota Goyo), who Charlie hasn't seen since the kid was born. Max's mother recently died in a car accident, and Max's aunt, Debra (Hope Davis), wants to adopt the kid. Charlie makes a deal for a hundred grand for Debra to get the kid, but Charlie first has to take care of the kid for the summer while Debra and husband Marvin (James Rebhorn) are off in Europe. So the two hang out while Charlie loses more money, and another robot, to a stupid fight. But when Max finds an old, derelict robot, Atom, and fixes him up, the two of them might just have a robot that can turn things around, not just for Charlie's fortunes but also for the father-son relationship that's been neglected for years.

If you've ever seen any boxing movie you can more or less predict how this film is going to play out, especially once Atom is found at a junkyard. This movie follows the basic template of Rocky, with the underdog slowly fighting his way up the ranks, from underground fight clubs to the professional stage, all before taking on the reigning champ, Zeus, robo-a-robo. Whether he wins or lose just the fact that he gets in the ring and holds his own is the real winning, just as it was in Rocky. 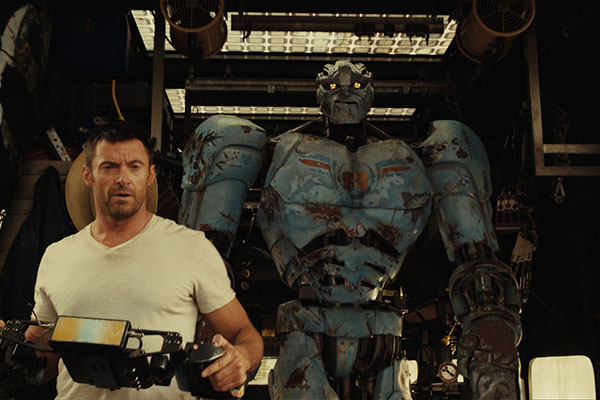 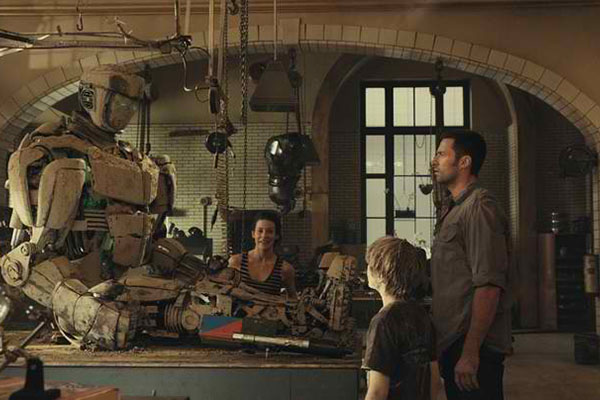 So we're not here for the plot, let's be honest about that. This is the same retreaded sports underdog plot that's been shown for going on fifty years now. What matters, instead, is how the film plays around with its basic elements, and this is where Real Steel manages to create some cinematic gold. It crafts a world that feels lived in, one with a history that it relies on to make the setting feel true and realistic, all without having to spoon-feed the history of the league and robot-boxing to the audience. For such a dumb, basic film it's got a smart script behind it.

Part of what makes the film work so well is that it uses a lot of practical effects for its robots. Steven Spielberg was an executive producer on the film and his big advise was to take the lessons taught by Jurassic Park: use practical effects where you can so give the actors something to act against while also making the special effects feel real on screen. Whenever the robots were standing still or just doing basic motions, the film realized on animatronics, which each of the fighting robots having a practical build. Sure, during the fight sequences the robots are CGI, but by then you've already bought in on them as real constructs and it all comes together.

Still, the real genius of the film relies in the casting of Jackman. The actor is solid in everything he's in, and given a script with a dumb premise but smart writing, Jackman is able to work with it and give the film heart and soul. In lesser hands Charlie would just be a fuck up and the bond between father and son would come across as contrived. Here, though, the relationships his builds -- with Max, with long-term friend and potential love interest Bailey Tallet (Evangeline Lilly) -- feel more than just perfunctory. Jackman carries the film across the finish line all on his own, lifting up everyone around him to really make this film work.

Without Jackman you see the flaws in the story. There's no real villain of the piece, for instance, as Durand's Ricky is gone for most of the film after the opening, reappears once and then vanishes for the rest of the film. Meanwhile Zeus owner Farra Lemkova (Olga Fonda) isn't developed as a real character. She's rich, she's famous, she owns the champion bot, but she's not even thinly sketched; her characterization is nonexistent. So there's no real challenge in the film for Charlie to overcome, no one to fight and best because he's just gotta prove himself to his son, and even that gets largely resolved before the last act. After that, the film just coasts through its ending. 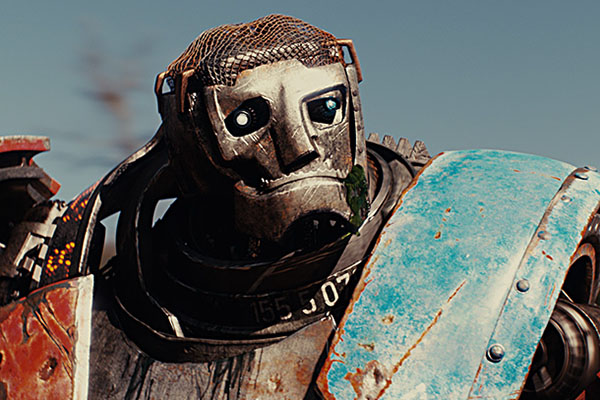 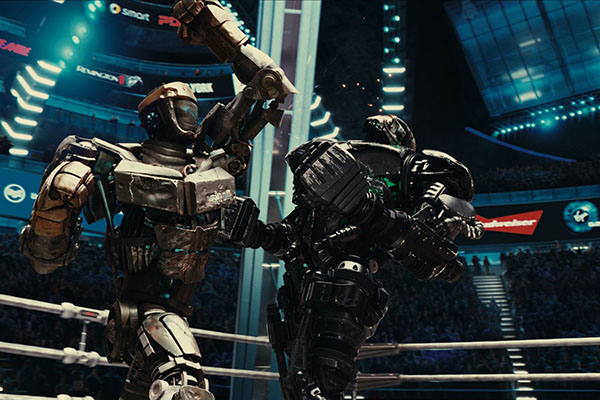 And the whole end is silly, too. Charlie is a fuck up, everyone knows he's a fuck up, but just because he has a winning bot suddenly he's acceptable again. He doesn't change any of his behavior at all as he's still out to make a quick buck throughout the film, and he finds it all to easy to abandon his son more than once. And yet, in the last scenes of the last act, suddenly he's father-of-the-year, a smart loser who knows that although Atom doesn't win the fight he still managed to go the distance and that's enough. The ending of the film doesn't work for the character we know, and Charlie doesn't earn any of the victory the ending tries to sell.

At the same time, though, it's all constructed in a crowd pleasing and enjoyable way. That's why it's both a dumb and a smart movie. It's terrible at telling a real story, but when it comes to engineering a big, dumb, crowd-pleasing robot film the movie is aces. This isn't a movie you can think to hard upon, but if you just want to turn your brain off and let Hugh Jackman charismatically entertain you for two hours, Real Steel is the real deal.