The City is a Monster

You can mark this as the end of the YA boom in cinemas. While The Mortal Engines barely made a mark in theaters (making reportedly less than half is budget back, a far cry from the heydays of the genre under The Hunger Games), it is remembered by Hollywood as the time when the whole genre finally stopped making any sense; the money just was no longer there. Of course, the canary in the coal mine was The Divergent Series when the last movie never got made, but The Mortal Engines was the final nail in the coffin. 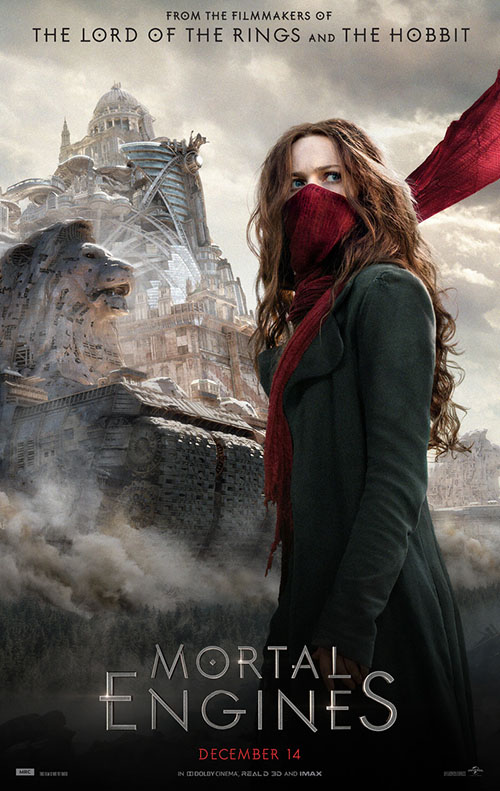 I can see why the production team thought they had a winner, mind you. They lined up a winning cast packed full of solid actors, and they were working off of a script fro producer Peter Jackson and his writing team. This was the Middle-earthCreated by J.R.R Tolkein, Middle-earth is the setting for the author's big sagas, featuring the characters of hobbits, dwarves, elves, and men. adaptation genius where even his terrible movies in that series were still goldmines for the studio. If anyone could take a weird tale like The Mortal Engines and spin it into another hit, it was Peter Jackson.

And make no mistake, the whole concept of this story is weird. Anime weird, even. There was a war, one that involved super-powerful weapons that destroyed whole countries and cracked the very tectonic plates of the world. The survivors crowded into cities which then, using new engine technology, became giant rolling behemoths that roamed the remains of Europe, collecting scrap and ruling the wasteland. The city we focus on is London, one of the largest of the rolling behemoths. We pick them up just as they've giving chase on a small town, Salzhaken. They gobble up the tiny town, and its inhabitants, tearing it apart for scrap to power the large town and its needs.

One of the survivors of that city is Hester Shaw (Hera Hilmar), a masked girl out for revenge against the depraved Deputy Lord Mayor of London, Thaddeus Valentine (Hugo Weaving), nearly getting a chance to kill him before he attempt is stopped by Tom Natsworthy (Robert Sheehan), a low-level scrapper and apprentice historian for London. Thaddeus chases Hester to the edge of the city, throwing her from the ship before also throwing Tom as well (as Tom overheard some stuff he shouldn't have, like the fact that Thaddeus killed Hester's mother). Tom and Hester have to work together to stay alive, find allies, and find a way to stop Thaddeus's plans (and he has some seriously evil plans), all while also being chased around the wasteland by a robotic killer, Shrike (Stephen Lang) out for his own bit of revenge.

There's a lot to like about this film, don't get me wrong, but before we can get to all that we have to get over the first big hurdle: this film is really stupid. It takes a lot of investment to put all the issues I have with the science-fantasy of this film aside and buy in to the world its presenting. When I first saw the sprawling megalithic rolling city of London I had to try and figure out how a beast like that could have even been constructed, built as it was obviously from existing parts of London. It's like a prop city from Doctor Who where the designers didn't know when to stop adding on bits and pieces. This is certainly the largest and most ridiculous of the cities, sure, almost like a rolling Death Star fill of mind-mannered people stopping for tea every afternoon. It just doesn't work. 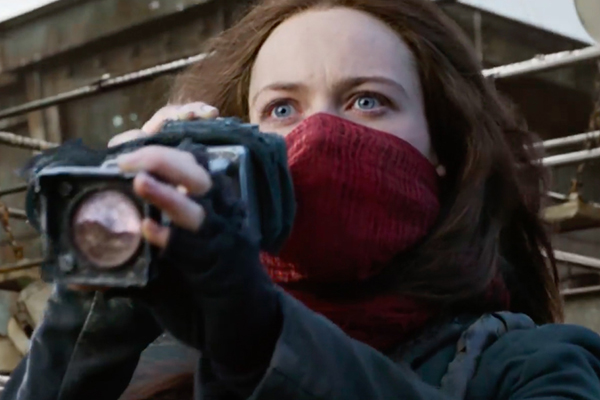 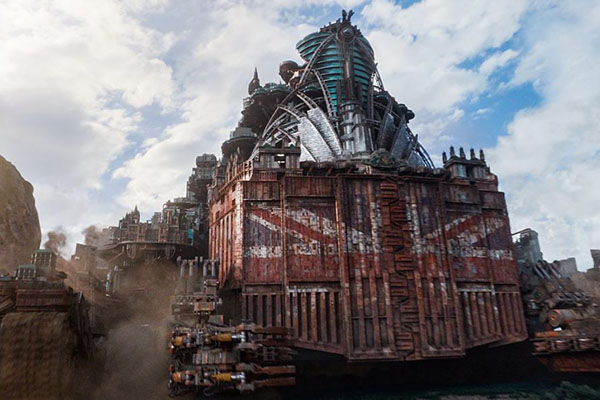 This isn't the only city of its nature we see, but most of them are smaller and look like they were built by engineers. It's London that looks the most ridiculous, and if it was just glimpsed once and set aside, maybe I could move past it, but the rolling city of London is our central set-piece and we keep revisiting it over and over again. If you can't buy into this massive city you'll never invest in the rest of the movie. I never was able to get past it.

Giant mechs are one thing, mind you, and I'm all for big robots and big sprawling tanks; plenty of watchable action movies have those in spades. But this behemoth makes no sense. If a city like this was supposedly built from a real city it would have broken apart and gotten torn asunder, a half-dead beast rolling in circle until someone had the mercy to put it down like Old Yeller. It wouldn't look nice and tidy, a well manufactured vehicle, no matter how long the engineers had to work on it. It would have been easier for them to build a new vehicle and just ignore London altogether, but that's not the mythology of this film.

Once we leave London behind (for whole stretches of the film) it's gets a little better. The world is still ridiculous and it's clear the film (and likely the book before it) is making up the rules of the world as it goes along. It reminds me a lot of Star WarsThe modern blockbuster: it's a concept so commonplace now we don't even think about the fact that before the end of the 1970s, this kind of movie -- huge spectacles, big action, massive budgets -- wasn't really made. That all changed, though, with Star Wars, a series of films that were big on spectacle (and even bigger on profits). A hero's journey set against a sci-fi backdrop, nothing like this series had ever really been done before, and then Hollywood was never the same., just set in a post-apocalyptic, steam-punk Earth. We have a band of rebels that our two heroes join up with, their cloud city they venture to for supplies and assistance, and then an entire rebel base they all flee too before the rolling Death Star (with its mega-weapon) comes rolling up to blast away and kill everyone inside.

But where that film series (at least the first two or three films) crafted a world that made sense, in part because it was alien so it didn't have to follow our own rules, The Mortal Engines never settles down enough to give us a single, cohesive story. It's constantly rushing, throwing out new ideas and reinventing itself, adding plot lines, dropping other ones, and rushing around like a toddler hyped up on candy and cocaine. The film easily has three movies worth of plot here and if it could have just focused on one story, given us time to breathe and enjoy the characters that were introduced, the different sections of the world, and the stories going on in each section, it would have been much stronger for it. 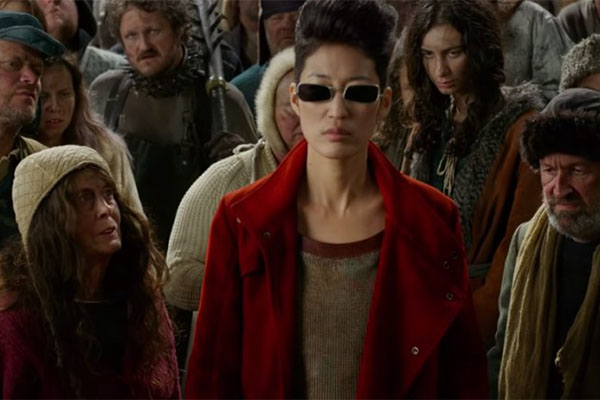 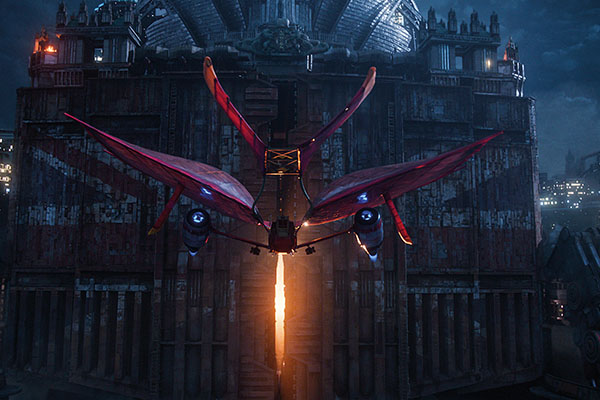 What really sucks is that it's pretty obvious everyone in this film really cared about what they were making. It's easily one of the prettiest, most handsome cinematic disasters I've ever seen. It's packed full of lush costumes, lived in sets, and so many believable special effects that it makes you sad it was all wasted on this film. I loved every second I got to feast on the film with my eyes while hating all the stupid story details that were put in at the same time. It's such a conflict.

The actors do their part to try and sell the terrible material. Credit, as always, is due to Hugo Weaving who can sell even the worst material with aplomb, and here as well he takes the role of the heavy and makes him deliciously, charismatically evil. Hilmar's Hester is a bit of a void, but she's balanced out but the very charismatic Sheehan. Even the band of misfit rebels they team up with -- Jihae as Anna Fang, Rege-Jean Page as Madzimoyo Khora, Menik Gooneratne as Sathya Kuranath, Frankie Adams as Yasmina Rashid, Leifur Sigurdarson as Nils Lindstrom, Kahn West as Toa Heke -- are all fun and watchable even if they don't get a ton of screen time. This film is filled to the brim with great actors as much as it has terrible material.

Hell, there's Shrike, a character that just doesn't work at all. He's a very anime-style automaton that chases Hester for most of the film. We learn, later, that he's actually a father figure for her and she bailed on him to get her revenge. But in the last scenes for him, the film packs in depth and emotion and a whole lot of back-story and he goes from villain to tragic figure. These kinds of moments are great, but they're rushed past as soon as they're over and no one thinks to mention it again. I needed a whole movie with Shrike, not to make him the middling villain of a middling second act. Ugh.

This movie could have been great. There are so many things about it that it gets right, but the very concept is beyond stupid and the film never settles down long enough to either invest in it or move beyond it to a story that actually works. I both seriously enjoyed this movie and absolutely hated it in equal measure. A film has never left me so conflicted and while I want people to see what a tragic mess it is I also would never wish this film on anyone. It's amazingly, stupidly, insanely stupid and I'm glad the studios have decided that YA films like this should never be made again.