When Fate Is On the Line

It took a long time for a third Bill and Ted movie to come to fruition. There were multiple non-continuity extensions of the franchise -- an animated series, a live-action series, a few comic books -- but a proper sequel never seemed to materialize. This was probably in part because the second film, Bill and Ted's Bogus Journey, didn't make the kind of money the studio would have liked to see. A script for a third film supposedly became the critically panned Bio-Dome, so maybe it was a good thing the series didn't immediately become a trilogy. 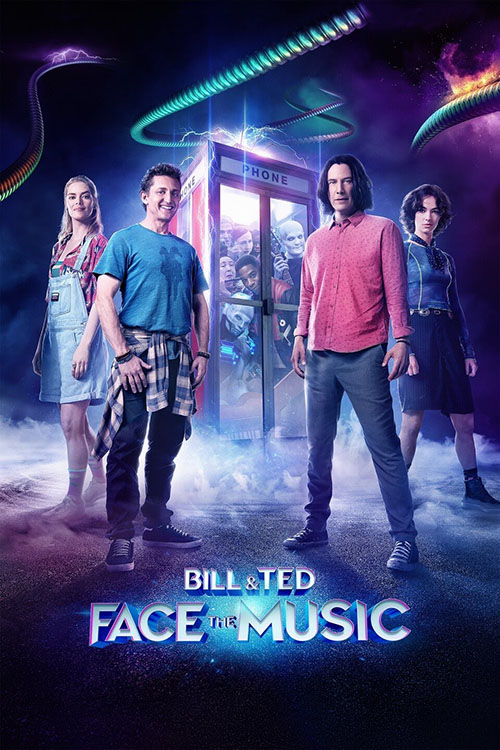 Of course, over the last nearly 30 years the cultural cachet for Bill and Ted has only grown. Their movies, while silly, have a certain easy-going, fun just because, timeless quality to them. These two slackers with heart continue to be old friends that each generation has come back to, their adventures fun to enjoy without being challenging or overly dramatic. Where Marty McFly was desperate to save his future, Bill and Ted were always just there, having low-key adventures in their usual easy-going manner.

While the announcement of a third film, Bill and Ted Face the Music was a bit unexpected, at the same time it makes sense for these characters to get another chance at life. both lead actors Alex Winter and Keanu Reeves continue to work in Hollywood, with Reeves one of the biggest stars around at this point. A fun and silly passion project from the two of them (and they had been pushing for a revisit of these characters for years) was going to happen eventually, and with Gen-X now in a position to reminisce about their own misspent youths (80s and 90s nostalgia being very in), Bill and Ted were primed for a return. The only question was if it would be more Excellent Adventure than Bogus Journey.

Bill and Ted Face the Music honestly splits the difference between the two previous films. Borrowing elements from both -- time travel from the first film, Death (still played by William Sadler) and Hell from the second -- the film puts Bill (Winter) and Ted (Reeves) on an adventure alongside their grown-up daughters Theadora "Thea" Preston (Samara Weaving) and Wilhelmina "Billie" Logan (Brigette Lundy-Paine). It seems that, after all this time, Bill and Ted still haven't written the song that was supposed to align the universe and save the world, and now, with only about 75 minutes (San Dimas Time) left the guys have to write the song or the universe will end.

The thing is that the boys haven't failed for a lack of trying; they literally just can't figure out what the song should be (despite learning to play just about every instrument they can, from bagpipes to theramins, with a fair bit of deep throat singing mixed in). So the guys have the idea to steal the song from their future selves, assuming they can find a future version that's actually written the song. Meanwhile, Thea and Billy decide that what their fathers need is an awesome backing band to help them perform The Song. So they take a different time travel device and bounce around collecting historical musicians -- DazMann Still as Jimi Hendrix, Jeremiah Craft as Louis Armstrong, Daniel Dorr as Wolfgang Amadeus Mozart, Sharon Gee as Ling Lun and Patty Anne Miller as the prehistorical drummer Grom. They're all going to have to hurry, though: the second Bill and Ted flaked out, the future Great Leaders sent a murder bot after them because if The Song can't save the universe, maybe the death of Bill and Ted will. 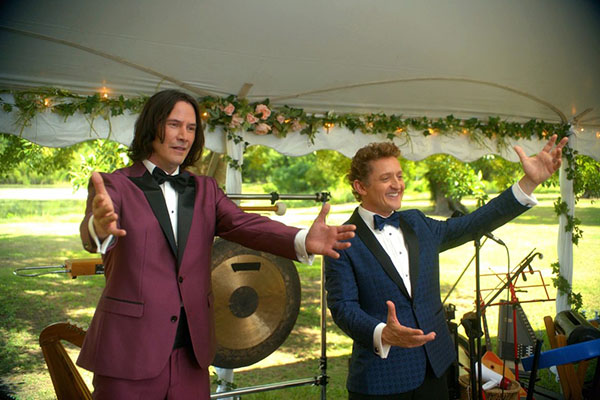 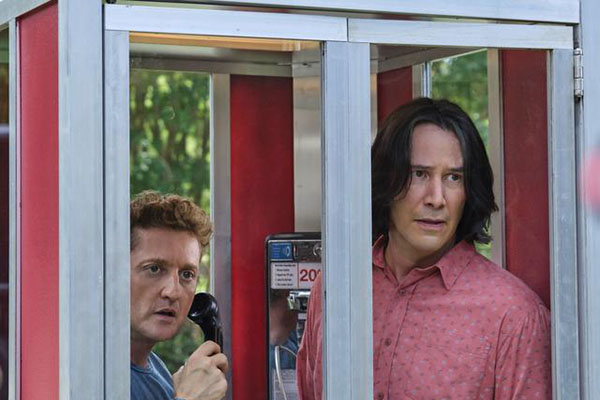 In many ways this movie feels like a fusion of the first two movies. All the time travel shenanigans, both from Bill and Ted and their daughters, give us that breeze, sketch-like format that fueled the best parts of both of the previous films. Of the two sides, the daughters get the better plot line here as their adventures collecting musicians has a great, anachronistic feel to it along with plenty of humor. The guys traveling along, finding more and more desperate versions of their future selves makes a certain amount of sense for the characters -- if they hadn't written the song yet, they never would -- but the plot line isn't as funny as it is sad. It doesn't ruin the movie by any stretch, but it would have been nice if this half were funnier.

The climax of the movie is certainly where the film finds its best energy. From all the characters arriving in Hell (via various means), to Death's appearance once again, and then everyone coming together to perform The Song the film picks up energy and really finds its groove. It's a bit of a pity that it all happens in the last act, but that's at least better than Bogus Journey where the last act was when that film fell apart. If anything, this movie improves on the first sequel by making it's big, climactic performance a rousing and fun climax of the film with just the right amount of cheese; it finds the perfect balance Bogus Journey lacked.

Of course, the fact that the film finds its footing whenever Bill and Ted hang out with Billie and Thea makes sense: these two actresses really nail their characters. It's pretty clear weaving and Lundy-Paine studied the first two films because they absolutely hit all the beats of Bill and Ted, embodying all the rhythms of those characters in their own performances. In fact, I'd say the two girls were deeper into their performance than even Reeves, who lacked that special fun-loving energy he used to have as Ted. Winter still had the prefect performance as Bill, but against Winter and the two ladies, Reeves was missing a little bit of something.

Meanwhile, the Princesses have once again been recast, with comedic actresses Erinn Hayes and Jayma Mays taking over as Elizabeth and Joanna respectively. The ladies are actually given a little more to do here, put on a plot line that sees them time traveling with future versions of themselves to... well, it's hard to say. Unlike with the guys and their daughters, where we get to see all their adventures, the Princesses just kind of pop up once in a great while to react to Bill and Ted and then disappear. It seems like they're supposed to have their own adventure, but nothing about their plot line really gels and it feels like a waste of their time (and these two funny ladies). I have to wonder if more of their scenes ended up on the cutting room floor, sacrificed to keep the film at a brisk 90 minutes (give or take). 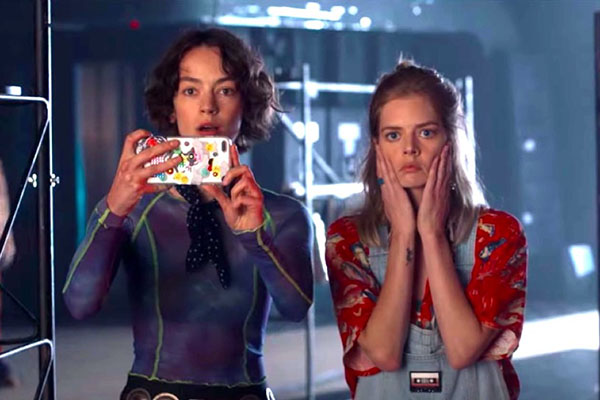 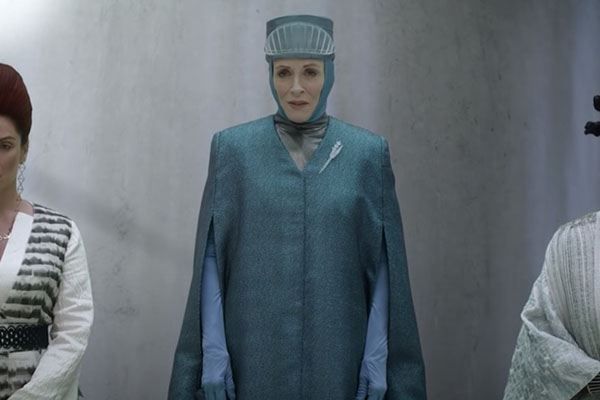 And yet, despite all these flaws, I did enjoy this movie a lot. So much, in fact, that I was a little sad when the credits came up. I wanted to get a bit of time with the characters after their climactic performance, just to hang out with these four easy going people -- Bill, Billie, Ted, and Thea -- and see then enjoy the fact that they finally figured out The Song. The film builds with such energy, and then just... ends. I wanted more, which I guess is a really good sign all things considered.

I don't know if the film will get a sequel; it certainly feels like the conclusion of the story. The film is reportedly doing well enough with its VOD sales (as we live in this age of COVID-19) that it could possibly warrant another one if the guys wanted to. While I don't think the story needs further continuations -- the guys performed The Song! -- it would be great to spend more time with the dudes and their daughters, to find another adventure that warranted them all coming together and just hanging out. If a fourth Bill and Ted (and Billie and Thea) movie were made, I'd be there for it. Face the Music isn't without its flaws but it's a fun, rousing, and enjoyably silly continuation that fitfully resurrects these two rockers. As a conclusion its great, but as a continuation to let the franchise grow I think it works even better.