The last Slasher film we checked in on, 2011's Cabin in the Woods, pulled a meta take on the horror movie genre. This week we're taking a look at another very meta film, one that also tries to reanalyize Slashers with a thread of comedy included, 2015's The Final Girls. In my head I group these two films together, and I'm sure for a number of horror movie fans, any that have seen this film, they probably do the same thing. But, at its core, these films are very different in intent and style. I loved Cabin in the Woods but I feel like, long-term, The Final Girls holds up better to multiple rewatchings. 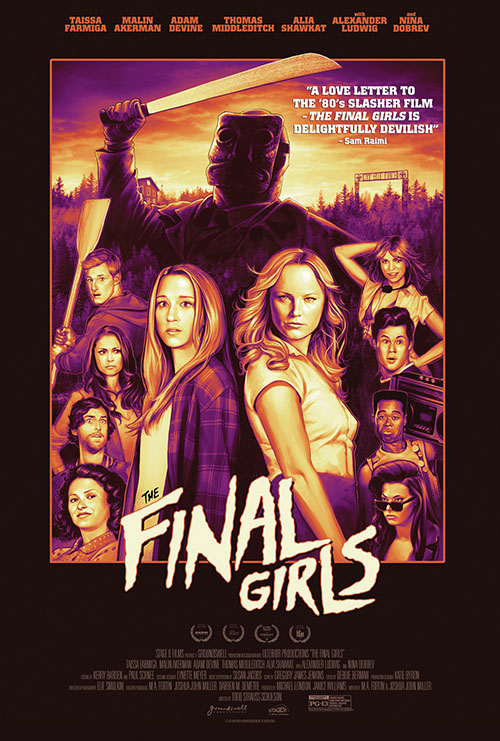 Of course, a lot of that comes down to basic construction. Both Cabin in the Woods and The Final Girls present a parody/pastiche of other horror films (Cabin in the Woods taking on every horror movie, but with the starting bones of The Evil Dead, while The Final Girls norrows focus down towards Friday the 13thOne of the most famous Slasher film franchises, the Friday the 13th series saw multiple twists and turn before finally settling on the formula everyone knows and loves: Jason Voorhees killing campers 'round Camp Crystal Lake.), but where Cabin builds itself like a puzzle box, with an overarching story on top of the slasher film we tuned into, Final Girls lives and dies in its focus on a single Slasher film (a film within a film, in fact), and the story of a single character within. This tighter focus, and the emphasis on the story of the main character, Max Cartwright (Taissa Farmiga), honestly make for a deeper and more enjoyable story long term.

The Final Girls begins three years before the main events of the film. It's there we meet Max (Farminga) and her mother Amanda Cartwright (Malin Akerman), a once rising movie star who had her big break in the slasher genre flick Camp Bloodbath. Unfortunately her career since they hasn't been as successful, and she's had no luck getting further jobs after having her kid. Unfortunately for both of them, a horrible car accident leaves Amanda dead and Max grieving for her lost mother.

Three years later, Max still seems pretty lost, living with her aunt and supported by her best friend Gertie Michaels (Alia Shawkat). She does have a guy that's interested in her, popular guy Chris Briggs (Alexander Ludwig), who once dated mean girl (and former friends of Max) Vicki Summers (Nina Dobrev). They all end up coming together at a screening of Camp Bloodbath, put together by Gertie's step-brother Duncan (Thomas Middleditch). Unfortunately the screening is a total disaster, the theater gets set on fire, and the kids have to escape through a cut in the projection screen... which only dumps them right into the middle of Camp Bloodbath. Soon they realize the danger they're in as they and the main characters of the movie -- including Nancy, the character played by Max's mother -- are all soon to be the victims of slasher killer Billy Murphy (Daniel Norris). The kids will have to find a way to escape the movie, and maybe save as many of the counselors, including Nancy, as they can before the credits roll on this little film.

While it would have been easy to just dump five characters from the "real" world into an aging Slasher flick and call it a day, what makes The Final Girls work so well is that the movie invests in its characters. Max loved her mother, and seeing her mom again, even if it's not really her mom, sets off all kinds of emotions for the girl. SHe's confused, but glad, of course, and is constantly trying to find way to ensure Nancy makes it to the end of the film, especially if there's a chance they can help Nancy make it out of the film into the real world so she can have a piece of her mother back once again. 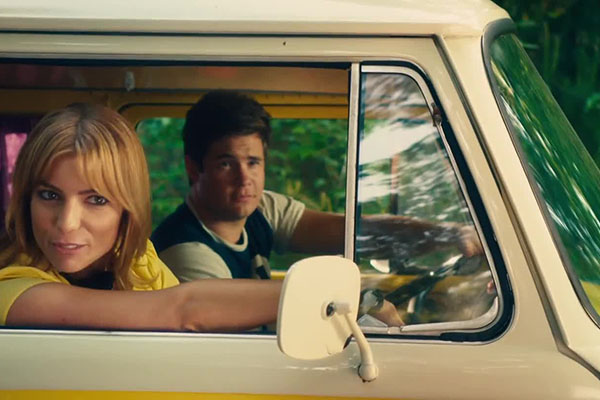 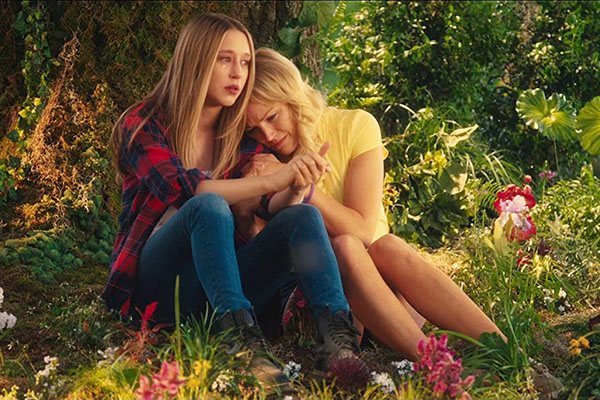 This all is played out wonderfully by Farminga who invests real soul in her character. Whereas Slashers don't general have the best writing or acting, a point this film makes about it's own movie-in-a-movie, the real characters in the film are written, and acted, to be more than just cookie cutter fodder. They have lives, they have identifiable character traits, they have souls. And with Max as the lead character, Farminga gets to invest the film with real emotion, real heart, and ratchet the whole movie up two or three ticks higher than its basic premise has any right to claim.

Heck, it's all the "real world" characters, though. Shawkat's Gertie is spunky and fun, like any Slasher film best-friend is supposed to be (think Tatum from Scream, for example), but she also has striking dynamics with other characters in the film. SHe cares for Max, is at odds with Vicki, and is constantly hating on her step-brother, giving her dimensions beyond just a standard stock best-friend. Vicki, to, is more than a mean girl; she's an overachiever, Type-A concerned with her school work as well as her popularity. She also cares for Max, feeling a little betrayed as they grew apart over three years. She's shaded and dynamic, more interesting than a character like this should be.

If anything, it's the guys in the movie that are less interesting and dynamic, but I think that was kind of the point, really. Chris is just a stock beefcake with a heart of gold, and Duncan is basically this film's version of Scream's Randy, the nerd who knows all about the movie. But this film isn't The Final Teens, so they put all the emphasis on the lead women, and it makes for a strong dynamic that also plays against the normal Slasher stereotypes. The girls aren't just here to get drunk, get naked, and then die, but lead the force to save their squad and stop the killer in his tracks.

Of course, the rest of the cast also isn't as dynamic but they're specifically supposed to be dumb, 1980s stock characters (to help highlight the differences between them and the "real" characters). Adam DeVine's Kurt is a wannabe bad boy who talks like he's oversexed and constantly banging girls, but he's clearly trying way to hard, a part Devine plays to perfection. Angela Trimbur's Tina is the truly oversexed bimbo of the group, constantly getting naked (or would be if the real world characters didn't throw the whole dynamic of the film off) while she jams to her Walkman. She's enjoyable for how dumb she is and how much fun Trimbur has playing the character. Really, all of the cast, from these co-leads to even the stock characters in the film-within-a-film, are played with gusto by their actors, all of whom are clearly having fun in this pastiche of a movie. 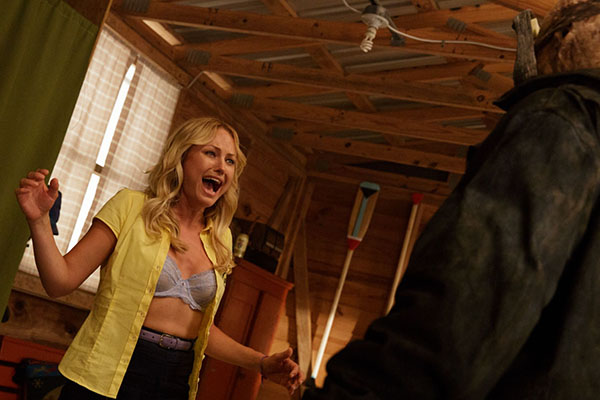 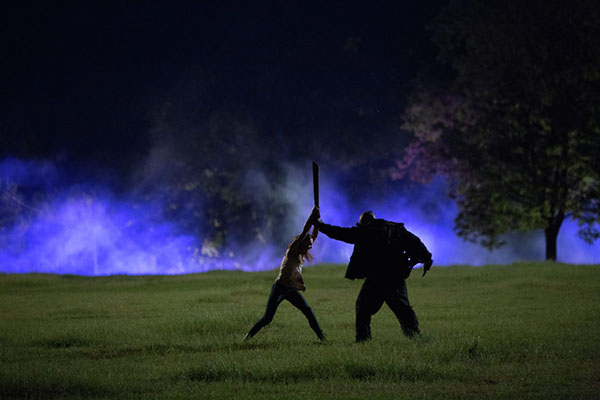 But it's really the heart and soul of the mother/daughter tale that drives this film. The comedy in the movie is great, the jokes spot on and delivered wonderfully by the cast. There's creativity here, with the film managing to make its own call backs to its setup, having rules that layout the production and that can be abused by the outsiders once they're dropped in. But once you get past all that, you have a core tale about grief, loss, and rebuilding, and it gives the film so much more emotion and substance than any slasher film I've seen before.

Yes, there are kills, and a couple of decent jump scares, but the film does a bit of a bait-and-switch, luring you in with a scary parody and then giving you something so much more. There are plenty of Slasher flicks, and more than a few parodies of the subject, but I don't think there's been any Slasher that we've watched yet where I genuinely cared about the characters once the credits rolled (even the films that I liked had lead characters that were decent but not ones I truly invested in). I cared about Max's story, though, and when the credits rolled (and the movie pulled a fun little surprise at the end), I was a little sad the adventure was over.

The Final Girls did something I never expected: it made me care about the characters. A sequel probably will never happen, and that might actually be for the best (how do you pull something like this off twice?), but this one film really nails everything it was going for. I'll go back and watch a number of horror films over and over again, but The Final Girls is one where each time I get into it I truly enjoy it, start to finish.

Sex, of course. As a parody of the slasher films from the 1980s this film sticks closely to the killable sins from those genre flicks, and the one way to ensure getting killed is to have sex.

When a flower girl is out in the woods, she meets up with a random traveler. They go to have sex, because of course they do, and when the girl has her back turned the killer, Billy, shows up and rips the head off the traveler. Then he strangles the flower girl immediately after.

Seven, all of them camp counselors. There's also four fake-out kills of the main characters.