If You See a Cabin, Out in the Woods, Go the Other Way

The Cabin in the Woods

I have watched a lot of Slasher films in my life (I don't even think I've managed to write about all of them that I've seen, let alone all that exist, and I've been writing about them for two years running on this site), but I have to admit that The Cabin in the Woods is certainly the most creative one I've yet come across. It's meta in its construction, with a storyline riding on top of the basic "co-eds getting killed" plot of every Slasher, a loving tribute to horror movies or all stripes that, at the same time, plays with the very conventions of the genre. It's no surprise, really, that it comes from Joss Wheddon. 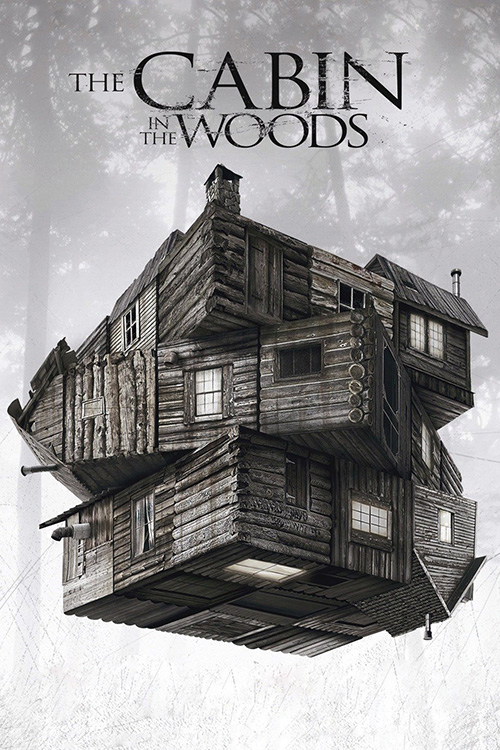 Of course, calling The Cabin in the Woods a Slasher film is a bit of a cheat; it is and it isn't one. It had five co-eds that go to a cabin and get offed one by one, yes, but that's a setup that could have come from The Evil Dead, a demonic gore-fest, as it could from Friday the 13thOne of the most famous Slasher film franchises, the Friday the 13th series saw multiple twists and turn before finally settling on the formula everyone knows and loves: Jason Voorhees killing campers 'round Camp Crystal Lake., and while it plays in the rules of Slashers it also features monsters from just about every horror movie in a existence (or, really, their off-brand copies). It's better to say that The Cabin In the Woods is every horror movie rolled into one, a gleeful, at times goreful, amalgamation that tries to have it all. And, often enough, it works.

The basic setup is that our five co-eds -- Kristen Connolly as Dana Polk, Chris Hemsworth as Curt Vaughan, Anna Hutchison as Jules Louden, Fran Kranz as Marty Mikalski, Jesse Williams as Holden McCrea -- head off to a cabin in the woods that Curt's cousin just bought. It's a remote and secluded place on a lake, perfect for five friends to venture to for a weekend of fun and debauchery. Along the way the meet a crazy old coot who sort of warns them away, but they don't listen (of course). The get to the cabin, get to drinking, have a party, and then the stumble upon the cellar of the cabin that is loaded with a ton of old knick-knacks.

That's where the main plot about the college students intersects with the framing story of an underground facility and the people working there. It seems that the five co-eds were unwittingly roped in to act as the sacrifices for this facility. Everything they're doing, from coming to the cabin to getting drunk and having sex, is all part of a "ritual". If the co-eds don't die, starting with Jules (the "Whore", as the film eventually puts it) and leading up finally to Dana (the "Virgin", who very much isn't but you work with what you've got, as the film puts it)m then the ritual is a failure. And you don't want to know what happens if the ritual fails. The second the co-ed find the cellar full of treasures they accidentally use one of them to summon the very things that will kill them -- in this case a zombie, pain-worshiping, religious cult/family called the Buckners. And then the killing starts and the rest of them have to try and survive... and maybe solve the mystery (for them) of why it's all really happening.

The convention of the movie is, of course, that the teens are trapped in the very horror movies we've all watched, over and over. These characters (assigned to cookie cutter roles of every Slasher flick), die over and over for our amusement, and the film uses this as an excuse to setup the killing, to put a subtext around it as it goes about it's gleeful just of scaring us and coating the screen in gore. Essentially the film gets to comment on its actions while still taking them, a having its cake and eating it too scenario. 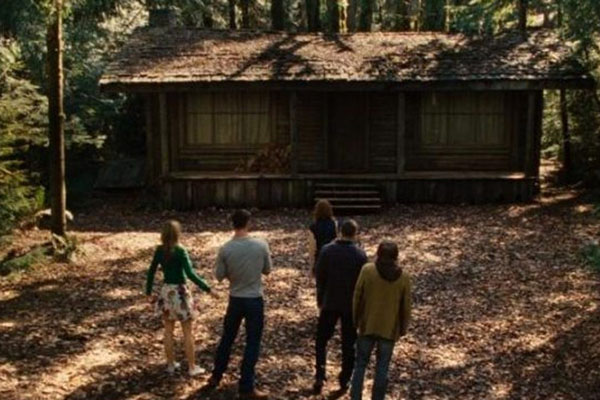 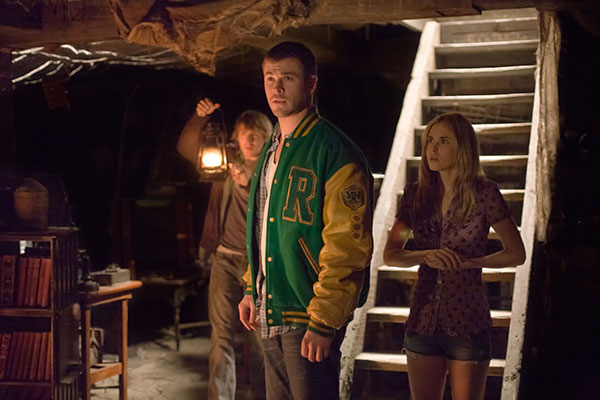 It would all be annoying, really, were it not for the solid characters. We're not just talking the teens -- with the obvious stand outs being Hemsworth, of course because he's great in everything, along with Fran Kranz's lovable stoner -- but also the people working in the facility, a diverse cast of characters led by Richard Jenkins's Gary Sitterson, Bradley Whitford's Steve Hadley, and Amy Acker's Wendy Lin. A lot of great material is mined for all their interactions, the humor the movie is able to derive from the situation which, of course, helps to up the horror when it comes, blood splattered, right at us.

The first two acts of the film are your standard Slasher fare, just with the meta story worked in. It's all solid setup, and the fact that the film goes along without a hitch up to that point (including the "closing rock song" that plays as it seems the last girl is killed, ending the "film") lends an air of perfect inevitability. But then, in the last act, the surviving characters are able to turn the tables on the film, and that's when the horror gives way to Evil Dead-style splattering gore and the movie finds room to kick it all up a notch. When people complain that the film doesn't have solid energy, that it seems to caught up in itself, I have to wonder if they even bothered with the last act because this is when the film really caps it all off with a bloody flourish.

I will admit that the last act does get pretty over the top, but that's kind of the point. The main story has played out and the only place to go it to the source of the horror, to find a new level to ratchet it all up to, and the pay off the promise of every part of the setup. The film introduces the idea of all these monsters potentially existing (with a board filled with creatures and a betting pool on which one gets unleashed), so it has to give us a taste of these beasts afterwards; to do anything less would fail to fulfill the promise.

If I had any complaint it's that the last act goes by just a little too quickly, that it's all just a bit too convenient in how the film ties everything up. The first time I watched the movie I didn't think anything off it (not once the splattering gore really came through), but at the same time a little more resistance for the characters in this last act, a bit more time to really make it all have better impact, could have been good. The film introduces so many ideas in this last section, but then the final climax (the denouement) is a lot of talking without nearly as much action. The film is so caught up explaining its story in the last seconds that it doesn't quite realize some of these answers should have come just a little earlier to keep the pace better. 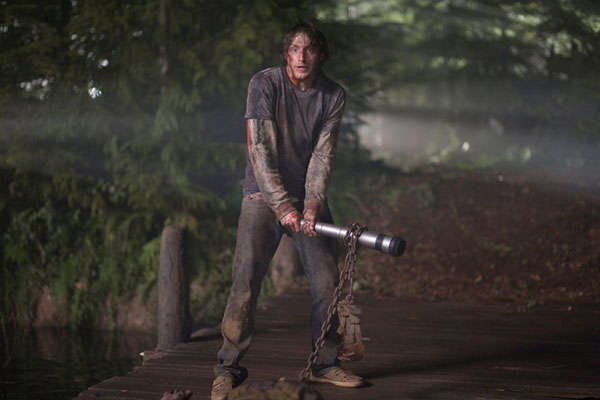 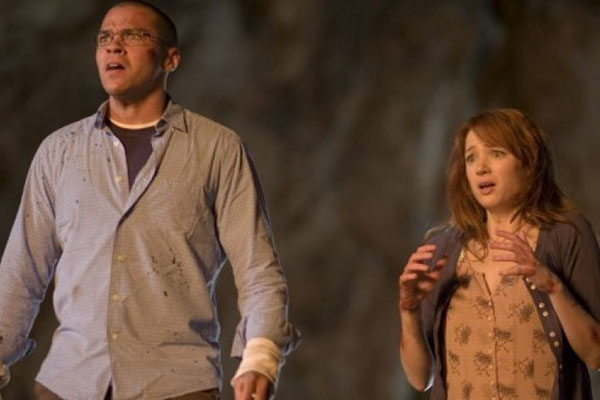 These are minor quibbles, though, when compared against all the glorious horror action this film delivers. The bigger issue I have with the film now isn't so much with the story or construction but with the writer. It's hard to watch anything Wheddon has done at this point without thinking about all the awful stories that come out about how much he's a misogynistic prick. You can feel Wheddon's creepy male gaze all over this film, even though he didn't direct it. While some of this can be chalked up to the conventions of Slasher films in general, Wheddon adds a taint to the whole proceeding. Was Wheddon drawn to the idea of the material because Slasher films tend to ogle the pretty ladies within, or does the film ogle the ladies so much because Wheddon wanted to do it and used the Slasher genre as an excuse? Maybe neither, but because he's involved we can't know.

A small part of me thought this while I watched the film again, and I did feel a little icky this time. By and large the film is still great, and I can't help but enjoy all the gore and scares. Wheddon used to be appreciated as a master of meta-form, taking existing ideas and giving them a solid twist to reevaluate the material. The Cabin in the Woods fits perfectly in that setup and I enjoy it for that (along with all the great performances, humor, and blood). But I can't watch it without thinking a little bit about the creepy guy behind the curtain; it takes a fantastic movie and makes it only pretty good in the end. I'd still recommend it but now it comes with a weighted asterisk, indeed.

The first on screen sin is smoking weed, which the "Fool", Marty, does throughout the movie. Ironically, is thee pot that actually keeps him alive.

When the "Athlete", Curt, and the "Whore", Jules, go out in the woods after the big party in the cabin, they find a secluded spot where they can make out. Dana opens up her top (revealing her breasts, a key part of the whole ritual apparently), and then Curt gets on top... and it's all interrupted when the Buckner son stabs Jules in the hand. There's a rustle, Jules is captured, and the son and mother zombies lop off her head with an old, rusty saw.

Three -- the Whore, the Athlete, and the Scholar -- and then far too many to even count. Dozens? Hundreds? The floors run red with blood, that's for sure. I counter over sixty and I'm sure I missed far too many.