Putting Meta On Top of Meta

The Scream films have been about commenting, more than anything else. Yes, they're slasher films, and they strived to have a certain amount of proper horror in and amongst the commentary and the humor that went along with, but the films always had one eye towards the meta, the say, "hey, we know what we are so let's have a conversation about what's going on." The first film wanted to talk about the Slasher genre, to comment on the tropes of those films and say, "this is what works, let's so something better." Scream 2, meanwhile, really wanted to comment on Slasher sequels, and it did, although if the point was, "sequels are always inferior to the original," it made that point (by example) a little too well. 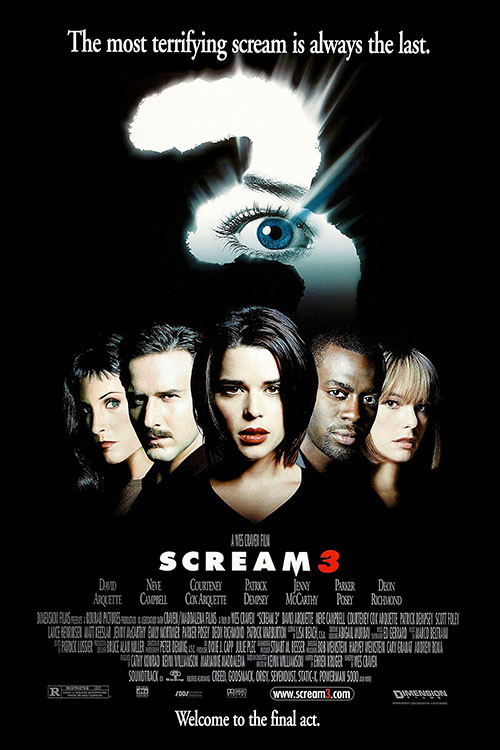 That brings on around to their third film in the series, and by this point Scream 3 isn't so interested in commentating on Slasher films anymore. Instead we're basically recursed and now what Scream is most interested in discussing is Scream itself. So we have a plot about the filming of the new Stab film (the in-universe films series based on the "real life" stories of Scream's characters) which is officially based on the original film's killings (which, curiously, the first Stab was based on Gale Weather's book about the first film's killings, so what was the plot of that movie?). Everything about this movie is a comment about the original film, the longevity of its central trio of characters -- Neve Campbell as Sidney Prescott, David Arquette as Dewey Riley, Courtney Cox as Gale Weathers -- and the artifice of Hollywood productions.

The film opens with the killing of Cotton Weary (Liev Schreiber) who, after everything in the second film, has gone on to have a successful TV talk show career. Unfortunately Cotton is tied up in the whole mythology of this series, so when a new killer comes onto the scene to start up the terror campaign against Sydney and her friends, Cotton was the first to bite it (if for no other reason than he was one of the only survivors from the previous film and the main characters all of plot armor at this point). We then cut over to Hollywood where the production of Stab 3 has begun. Gale is brought in by the Hollywood police to help their investigation and give any insight she can to Cotton's murder, it's connection to the new Stab film, and how it all ties up with Maureen Prescott (Lynn McRee) whose murder (which took place before the first film) set off all the events of the last two movies. Apparently the killer has been leaving pictures of Maureen at each of his murders, leaving a very definite connection tying everything together.

Of course, with all of this going on, the central trio all eventually come together which, in a way, is exactly what the killer wanted. As he slowly works his way through the Stab 3 cast and crew, killing off people as they'd die in the original script for the film, Sydney, Gale, and Dewey have to try and figure out who the killer is, what he really is after, and what kind of connection he (or she, or they) has to Maureen. And the answer might just change the whole dynamic and perspective of this entire series of films.

On its surface Scream 3 seems to have two goals: to comment on film trilogies as well as Hollywood artifice. While it's pretty good at being a spoof of Hollywood itself, something Hollywood never tires of making, Scream 3 is decidedly less successful. Frankly, it has very little to say about film trilogies, with the best it can devise being a tape that Randy (Jamie Kennedy, whose character died in the previous film) recorded before his death to warn his friends about what would happen if a killer came calling again. He lists off his rules for film trilogies -- the violence would be bigger, that no one would be safe -- but that's really all he had to say. It was a forced cameo but, worse, the info he provided didn't really illuminate anything about the movie. 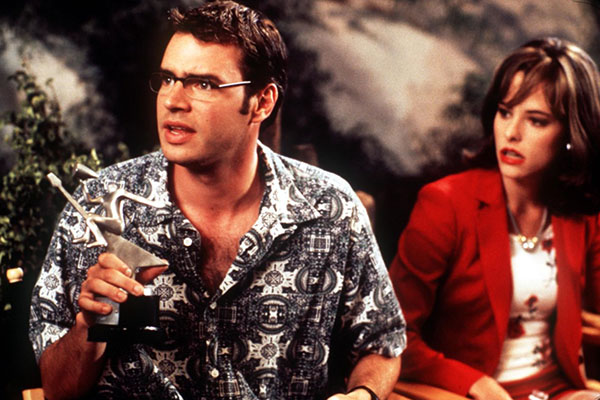 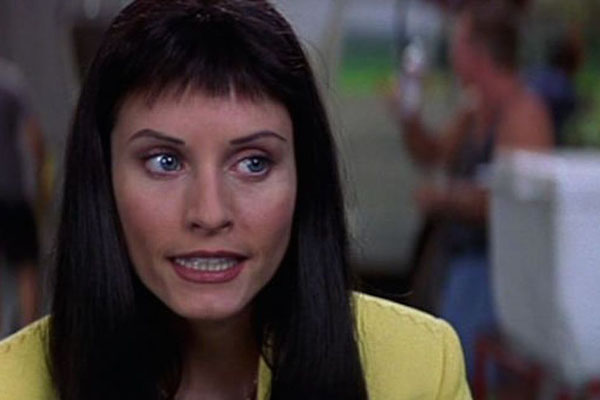 Despite Randy claiming that a Slasher finale would see bigger killers and more brutal deaths, Scream 3 is less bloody film than its predecessors. During production the studio, Dimension Films, looked to reduce the violence because there was increased scrutiny at the time about violence in media (especially after the Columbine Massacre). While the body count is pretty solid in this film, most of the kills are bloodless and, worse, not very scary or thrilling.

Of course, the lack of real scares is due, in no small part, to the fact that the main characters never seem to be in any real danger. The central trio of Sydney, Dewey, and Gale had already survived two films and, no matter how much Randy really wanted us to believe otherwise, there was seemingly no way these guys were going to die here, either. The film populates itself with a bunch of superficial fodder characters to throw around the main trio, but it's clear who's going to live and who's on the chopping block just due to how much time the film gives to developing the main characters (versus everyone else). The film (and the series) is in love with Sydney, Gale, and Dewey so its unlikely they'd ever die (bear in mind there are talks to bring all of them back for a fifth film at this point).

If the movie really were interesting in putting all its cards on the table, if it had been willing to kill anyone off at any time, it would have opened with Dewey or Gale biting it instead of a disposable character like Cotton. I do like Liev Schreiber and I think he did what he could with a severely underwritten character (both in the previous film and this outing), but killing Cotton, a character we had little attachment to and who had only shown up in a handful of scenes in the second film, tells the audience that the film isn't interested in taking risks (quite the opposite in fact).

The one character the film couldn't kill off, at any point, was Sydney because if this film has a final girl it's this gal. She's protected both by the rules of Slasher cinema as well as the fact that she's the central figure of the story in every movie. The killers in the first film wanted to kill Sydney because her mom got around. The killers in the second film wanted to kill Sydney because one of them was the mother of one of the killers from the first flick and she wanted revenge. Now, in this third film, we find out that this new killer (which, in an innovation for this series, there's only one killer) has a personal connection to Sydney: when Maureen lived in Hollywood she was forced to have sex at a Hollywood party, got pregnant, and had a son that she gave up for adoption. Years later the son (spoilers for a 20 year old movie), Roman Bridger (Scott Foley), tracked his mother down but instead of a warm reunion she closed the door in his face. So, out of revenge he not only plotted this series of killings but (in a giant retcon), set the killings in the original film in motion as well. 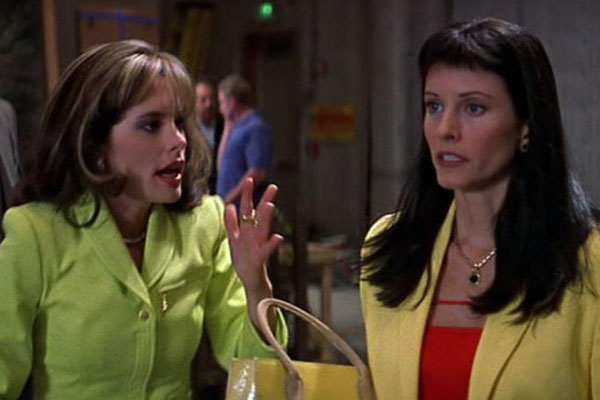 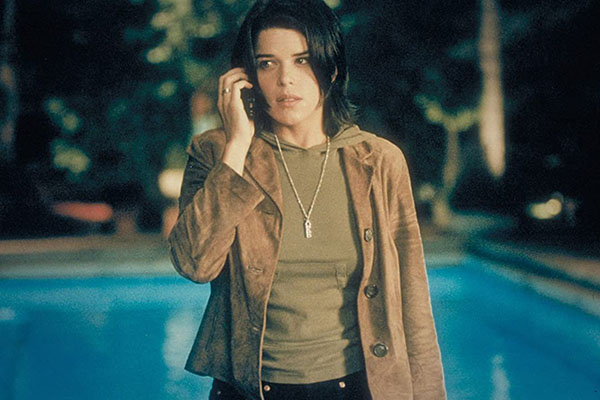 Yes, it's not good enough that a killer has a connection to Sydney in one film. No, now he has to be the mastermind behind everything his half-sister has suffered through over five years. Whatever commentary the film wanted to have about how Hollywood chews people up and spits them out, or how families can be driven to hate each other, is lost in the bigger retcon that is so ludicrous and stupid it just doesn't work. Intelligence is thrown out the window when we're somehow supposed to accept that everything in the whole series, start to finish, was somehow masterminded by this idiot character who can't even pull off this one killing spree properly. It doesn't work.

No, the simple pleasures of this film come not from its revelations, or its killings, but from its comedy. The real start of the show isn't the main characters, who by this point aren't even all that interesting anymore, but the side character stars of Stab 3 who act as the Greek chorus of the film. They not only get to handle the "Randy" role by commenting on Hollywood, but they get most of the laughs and good lines. The best of them is Parker Posey, playing a flighty, manic flibbertigibbet who's starring as "Gale" in the film, and Posey commits this role. Whatever flaws this film may have get glossed over when Posey shows up on screen and steals the scene away with her performance. It's not enough to make the film truly great but the actress does make the film more bearable.

The film works best when its trying to be about the artifice of this whole series. Those moments are few and far between, despite much of the film being set on Stab 3's fake sets, and the rest of the time it's just another rote entry in the Scream series. By this point the series has lost its own sense of self and become exactly what the original film was trying to comment on and mock: it's a Slasher with its own rules that's lost all sense of what's scary or fun. Instead of being fresh anymore, Scream has overstayed its welcome and become just another Slasher series like all the rest.

Lust (for a certain amount of lust, as these films haven't really ever been all that lusty). Cotton, now a famous talkshow host, gets a call from someone he doesn't recognize. Thinking it's a pretty woman on the other end, he flirts with her for a bit (in a nice nod to the opening of the original film) before it's revealed that the voice is actually that of the killer.

A quick two-fer, as is the style of this series. Realizing his girlfriend is in danger, Cotton goes running to her place (flying through traffic) to reach her in time. The killer is already there, and has been messing with her head (with a voice changer that can recreate Cotton's own voice), making her think Cotton was the one after her. Once Cotton gets there, she brains him with a golf club, and then the real killer shows up. He stabs the girl, then quickly stabs Cotton as well, removing this character from the series permanently.

Ten. Cotton and his girlfriend, plus five Stab 3 actors, a bodyguard, a producer, and the killer (with one fake-out)