At the time of its production UHF probably seemed like a sure-fire hit. Weird Al had been gaining momentum with his music career, having five pretty successful albums (self-titled "Weird Al" Yankovic and follow ups "Weird Al" Yankovic in 3D, Dare to Be Stupid, Polka Party!, and Even Worse) and his music videos were becoming cult classic works of parody. Taking his style and substance and applying it to a Hollywood movie where he could do movie parodies as well as the soundtrack for the film seems like it should have made all the money ever. 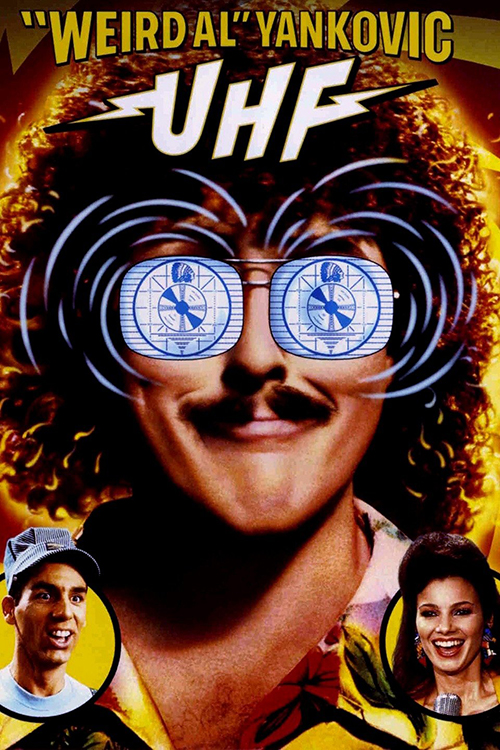 In practice, though, UHF is a bit of a mess. Released in the busy summer movie season of 1989, UHF was drowned out by the bigger films released during that span (like the third Indiana Jones flick) and couldn't even catch on as a counter-programming wonder. And, really, that's in large part because the film doesn't really know what it wants to be -- it's party heartwarming slob-vs-snobs comedy, part Zucker-Abrams-Zucker parody, part "Weird Al" joyous nonsense, and the various bits don't really work when stitched together.

It's best to think of UHF as a sketch comedy movie, one that just so happens to try and tell a story. In the film was have elaborate daydreamer George (Weird Al), a guy that can't get his head out of the clouds and hold down a job. His imagination is huge, though, so when his uncle Harvey (Stanley Brock) wins a cruddy little UHF station, U62, on the outskirts of town, he lets George run the place and, suddenly, the station becomes a hit. This enrages local TV man R.J. Fletcher (Kevin McCarthy), owner of Channel 8, who goes to war with U62. When Uncle Harvey end up in debt to a bad man, R.J. tries to buy the station for $75,000 (and then close U62 down). George ends up with two days to earn $75,000 and save the station or else.

That's the slobs-vs-snobs story that everything hangs on and it does an okay job of moving the movie forward. It's no better or worse that Revenge of the Nerds and it's elaborate college skits and Fraternity Olympics events, or Caddyshack and it's weird asides from Chevy Chase and Bill Murray. Movies like this basically just need the story so they can color in the margins, and this film at least invests enough stakes in the story that you care whether or not George is able to save the only job he's ever been good at.

While the story is good enough it's just not funny. It does the job of stitching the film together but it doesn't really add much except a motivator. Any time the film has to cut to the story it actually slows down since the laugh-a-minute skits have to be shunted out of the way. The tale of Channel 8 and U62 is so much padding without any real jokes assigned to it. It's easy to see a dramatic version of this story without all the jokes, and while that version of the tale might have worked, here it feels oddly out of place any time the film tries to invest dramatic depth in its A-plot. 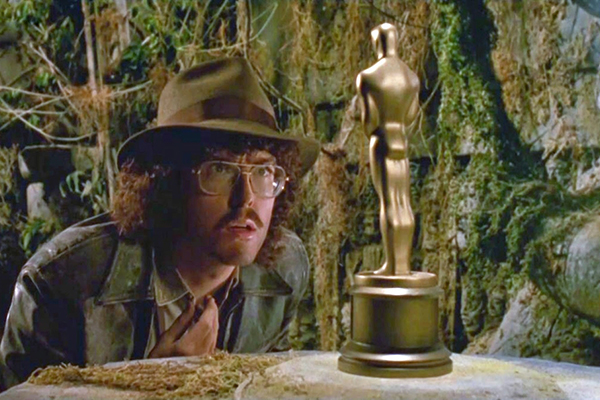 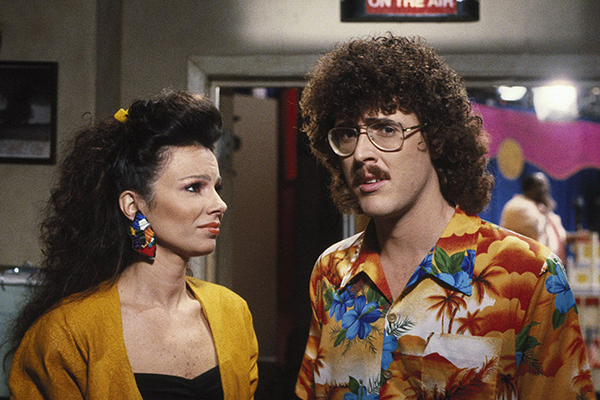 That's because the movie is so much better when it gets out of its own way and just gets to be weird. Once George takes over the station and lets his freak flag fly, wee get all kinds of skits (based around the original programming the station has on offer) that are uproariously funny. Commercials like "Spatula City", shows like "Wheel of Fish", fake movies like "Conan the Librarian" -- these are the skits that people quote over and over again. You can tell a UNHF fan when they're at a sushi restaurant and have to spout off "oh, Red Snapper... very tasty!" It's these moments where you can just sit back and enjoy the film because it gets to be as dumb and silly as it wants.

Other times, though, the film tries too hard to be weird. There are elaborate parodies of Indiana Jones and Rambo at the start and end of the film that really don't work. These are the film investing in that ZAZ-style of parody (sequences akin to Airplane! and The Naked Gun) but without quite knowing how to toe the line from hilarious parody and schlocky stupidity. The film is always bouncing back and forth over that line, balancing one moment of brilliance with another joke that's so hoary you can't even smile at it.

Frankly the movie has too much going on it in for its svelte runtime. We have the programming parodies, George's elaborate dream sequences, one music video, the "Save our Station" plot line against Channel 8, plus a love story, all stitched in together. If a few of these portions could have been removed so the film could focus on what it does well it would have been much stronger. And, really, the weakest part of all is the love story (so bad we're only just now getting to it). George is dating Teri (Victoria Jackson) but he's flighty and keeps forgetting to see her. When he misses a date for her birthday, she dumps him. Then he kinda goes overboard trying to win her back (veering a tad into stalker territory) before, for whatever reason, she just takes him back anyway.

The issue with this storyline is that it's not nearly developed enough. Having watched the outtakes and deleted scenes for this movie (included on the DVD and later Blu-Ray release) the filmmakers struggled to make this plot line work, filming hours of various segments they could have stitched in, none of which were funny even if they did develop the relationship better. It would have been great if the film could have ditched this storyline complete (Teri never feels like a good fit for George in the film) and just focused more on the station instead. 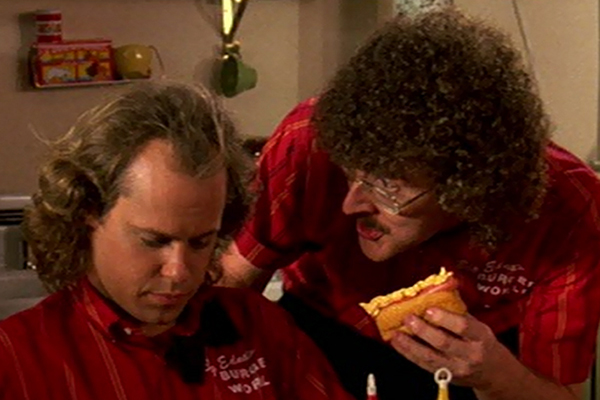 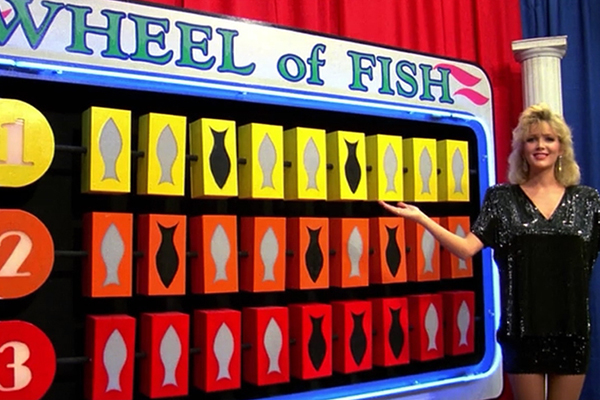 Besides, George already has a partner in his life: his best friend Bob (David Bowe). The early sequences of the film involve George and Bob getting fired from one job only to land the UHF gig, and then Bob basically just disappears for whole stretches. Instead of writing a love story the film should have been a bromance about these two (especially since Bowe, unlike Jackson, has actual chemistry with Al, as well as acting chops and comedic timing) while we watched them get the TV network off the ground together.

Really, going back over the film again, it feels like this whole production just needed another few months in the hopper, a little more editing to bring it altogether. Whether as a film or a sketch comedy series about two guys putting together station and their weekly hi-jinx and fake shows, UHF just needed more refinement, more focus, to truly bring it together.

And yet, that being said, I have still watched this movie more times than I can count. It's not great, honestly pretty dumb at times, and yet when the parodies come together and the film stops trying to be funny and is just funny, it really works. Hollywood took the film's failure as a sign that Al shouldn't lead another movie again when, really, Al isn't the problem here. He's actually a pretty good actor in this movie, a solid straight man to all the weirdness he unleashes. If just a little more time and care had been put in -- a bit more work on the script, a bit more a budget to pull off the elaborate skits -- this movie really could have sung. I like it for what it is, but even as a supporter of the movie I have to admit it's pretty bad. Fun, silly, enjoyable, but bad all the same.