I think it's fair to say that no one was clamoring for a return to the Men in Black film franchise. That's not to say that a sequel in the film series is necessarily a bad idea, not on it's face, but you have to look at the history of the series as well. While the first time, the original Men in Black, was a great movie, it was followed up by a lackluster sequel five years later and then, ten years after that, a decent but not amazing threequel. While the films have never been terrible, the energy certain had drained out the film series by the end of the third movie. All that needed to be said about the original cast of characters, and (really) the world as well, has been said. 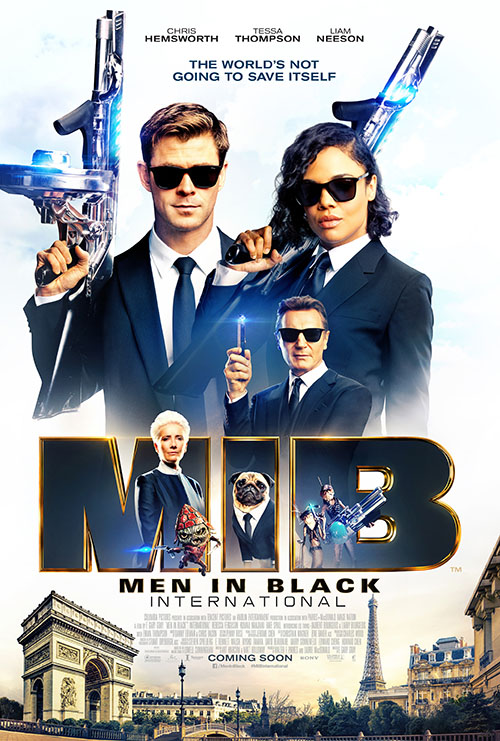 But because the first movie was a huge smash hit (and the sequels were moderately successful at least), Sony Pictures has been desperate to crank out another sequel for a few years. When it didn't look like Will SMith of Tommy Lee Jones (stars of the original trilogy of films) would come back, the studio looked at other ways to revive the franchise including a strange (but, honestly, amusing) idea of crossing it over with the 21 Jump Street series. When those plans fell through, the studio went back to the drawing board and, eventually, released Men in Black: International, a film very much in the same universe as the original movies but with (almost) none of the original actors involved.

It kicks off with Molly (Tessa Thompson) who, as a child, saw the Men in Black come to her house due to an alien attack. While her parents were memory wiped of the incident, Molly avoided the mind erasure. She then spent the next couple of decades researching the secret agency, trying to find any way she could to become of of their agents. Eventually she stumbles upon the New York office of the M.I.B. and, after a convincing speech, becomes the first person in the history of the agency to recruit herself (as opposed to being actively recruited by an agent). And it's good thing she's joined when she has as there's a big plot that threatens the whole world. Something is amiss in the London office, so our newly dubbed "Agent M" heads across the pond to aid Agent H (Chris Hemsworth) and office lead High T (Liam Neeson) to figure out what's going on, what aliens as now threatening the Earth, and how it can all be stopped.

I didn't hate the setup of this new movie; we'd already done the whole recruiting shtick in the first movie in the series, so there was no reason to go through that whole process all over again. Molly forcing herself into the agency is a neat twist and also helps to prove her bona fides, making her seem like a valuable resource for the M.I.B. The problems with the movie, though, start almost as soon as Agent M is admitted. At the start of the movie she's presented as a goofy and weird person, smart but a bit hairbrained, almost like a manic-pixie-dream-girl. However, over the course of the film her characterization keeps changing to suit whatever situation she's in. Sometimes she's a hard-assed agent, cold and distant. Other times she's warm and weird, a bit of a con-artist to she can worm her way into any situation. She's' made out to be an expert in multiple fields, and those that she doesn't know she almost immediately figures out. She is, essentially, the character of plot convenience.

This is going to sound like a slur, I recognize that, but looked at from another angle Molly is a Mary Sue character. Taking the trope at face value -- character that wasn't in the series before, inserts themselves for one adventure, is great at everything put before them, and then saves the day single-handedly -- Molly fits the trope perfectly. She stands in contast to Will Smith's Agent J from the first movie he really kind of sucked at everything that wasn't being a cop. He was loud and brass (and funny, of course) throughout, but it was consistent and he was never made out to be anything more than a beat cop who was good at taking down bad guys. Molly, though, doesn't get clear consideration or consistent characterization, which essentially forces her to be everything the story needs without every finding a story for herself. 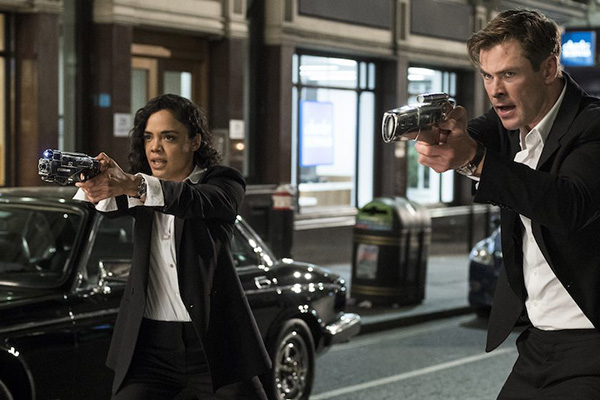 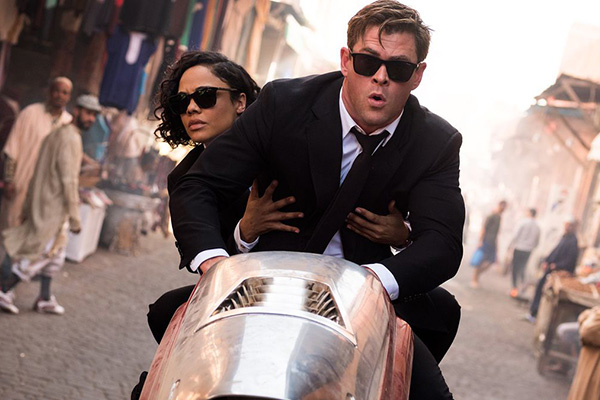 Still, her characterization is miles better than Agent H. Three yeras before the events of the film, H and High T were the two agents responsible for defending the Earth from an attack by the Hive, a group of aliens that invade every planet they can, taking if over and adding the collective DNA of the planet (and its species) to the Hive. After that great battle, though, H has basically been sleepwalking through his job, a trait that continues on through the rest of the film. He never actually stops being the lazy, sloven agent by the time the credits roll since the film never feels like it actually has to correct him. His reasons for being the way he is now after the battle with the Hive is a part of the plot of the movie (so I wan't spoil them here), but suffice it to say that the inciting incident never really explains what happened to him or why he is the way he is after, years before, being one of the best agents in the M.I.B.

What's clear is that Sony hired Hemsworth to do a riff on Thor, a character he can play with charisma to spare, and then hired his Ragnarok co-star, Thompson, for him to play off of. It was an attempt to recapture their Marvel Cinematic UniverseWhen it first began in 2008 with a little film called Iron Man no one suspected the empire that would follow. Superhero movies in the past, especially those not featuring either Batman or Superman, were usually terrible. And yet, Iron Man would lead to a long series of successful films, launching the most successful cinema brand in history: the Marvel Cinematic Universe. chemistry outside of that franchise. Of course, the attempt misses a couple of major things about the third Thor movie: many of the jokes and laughs came not from Thomspons Valkyrie (although she was a good character, certainly) but from the interplay between Thor, Hulk, and Loki. And there's also the fact that Thompson and Hemsworth really didn't have that much screen time together in Ragnarok, certainly not enough that I'd build an entire film around their supposed chemistry.

Here, the two actors never seem to click together. Hemsworth's sleepy performance never really gives Thompson enough to riff off of, while either Hemsworth wasn't getting anything from Thompson in return or he simply didn't care about the script. Whatever was actually the case, we're left with a film where the only thing Hemsworth can do is mug through a few scenes before we cut back to sloppy CGI and a threadbare plot to carry the film.

That is part of the problem, mind you: there's nothing in the story to really make this film special. In the movie the Hive agents take over a human and then wander around pretending to be him, all in search of a special weapon, a very powerful device that can't fall into the wrong hands, which is hidden on Earth. If that sounds like the exact same story as the first Men in Black, you'd be right. This time, though, it's done with none of the gusto or style, ploddingly setup and directed by F. Gary Gray, so that the whole movie feels like a long, slow slog. It doesn't help that the movie is nearly two hours long and that, honestly, there's close to 30 minutes of establishing shot, long pans, and tedious bicker that could easily have been cut to at least punch up the pace of the proceedings. 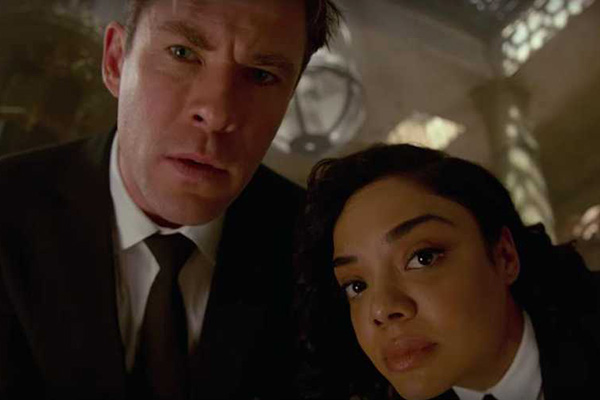 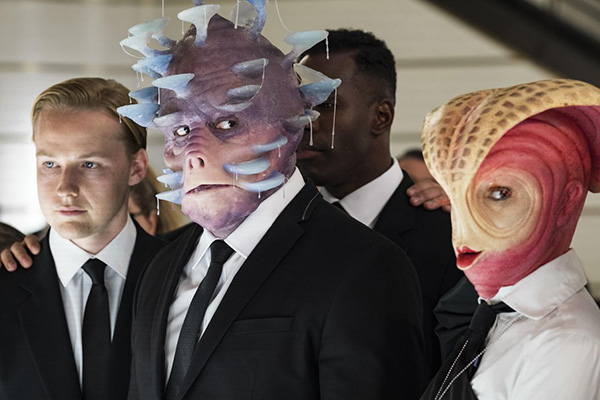 The thing that's really annoying is there's a core element of a good movie buried deep down in the muck. There's a scene near the end of the second act where H, M, and an alien are stuck in the desert together, bickering while they repair their vehicle. This scene is well paced and really funny showing all the elements the movie needed: good timing, funny jokes, and chemistry. It happens once in the film and the the movie goes back to its ponderous pace and mild-chuckle (at best) humor. The film only ever figures out how to be really good once, and then never again.

It's hard for me to see how anyone can really like this movie. It was a amusing in places, and a mild enough waste of two hours, sure, but it's also not something I enjoyed enough to ever watch again. It was there, and then it was gone, removed from my memory almost as quickly as it arrived. I can still quote whole sections of the original film over twenty years later, but I'll be surprised if I remember even a single moment of Men in Black: International after today.