Crap, We're Running Out of Time!

I'm a big fan of time travel yarns. I like the twistiness of the plotting, the way stories can self-fulfill themselves in ways linear stories are unable, all due to the time travel mechanic. There are any number of movies and shows (The Lake House, Project Almanac, all the Butterfly Effect films) that I wouldn't have bothered with if not for the time travel shenanigans at play in the story. A show like Timeless was a no-brainer for me. It was a show where people travel back in time to stop a different, evil organization of time travelers from changing the past to alter the present. Of course I was in. 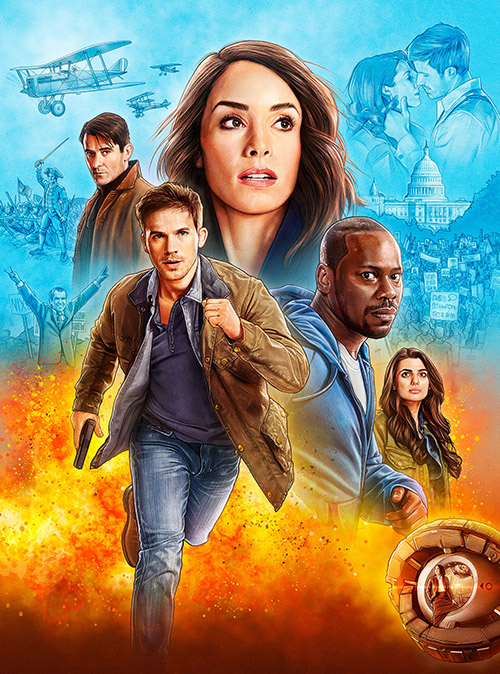 The thing about Timeless was that it was dumb fun. It was never great -- the writers were deeply enamored with the characters on the show, but just couldn't quite make that carry over to the stories -- but it had its moments, and there were enough good moments that the show was watchable fun. Popcorn viewing, really, even as the show tried to layer on dramatic moments, time travel twists, and character deaths. I certainly wanted to see it come back for a third season of doofy adventures, but I also wasn't surprised when NBC pulled the plug and canceled the show. Production company Sony tried to shop it around to other channels and streaming services, but Timeless couldn't find a new home. It sucked, because it ended on a really solid cliffhanger, one of the few times Timeless became a must-see show, and if ever there was a need for more of the series, it was right at the end.

Thankfully, for true fans of Timeless, the show received one last reprieve (this after having been canceled at the end of first season, only to then get a second season renewal three days later) -- NBC picked up the show for one last, two-hour finale, a final movie to cap the series and send the characters off into the sunset properly. The episode aired back around Christmastime, but I only just got around to watching in on Hulu, and, to be frank, I probably could have waited longer. The finale does tie everything up for Timeless, but not in a was that satisfied me.

On Timeless, our band of adventurers -- Lucy Preston, a historian and college professor (Abigail Spencer), Master Sergeant Wyatt Logan, the team's soldier (Matt Lanter), and Rufus Carlin, special technician for time travel and the team's pilot (Malcolm Barrett) -- have been traveling back and forth in time to stop Rittenhouse, an evil organization that stole one of the time travel vehicles. Rittenhouse wants to change history to make it even more favorable for Rittenhouse, and it has agents all throughout time to facilitate that end. Each week, the team would travel to a new era, figure out what Rittenhouse was up to, and then find some way to stop it (or, at least try to keep history somewhat on track). By the end of the season season, a number of the higher-up Rittenhouse agents had been eliminated, but then the team lost Rufus on a mission (shot in the chest in the late 1800s), and because of the rules of time travel, it didn't seem like they'd be able to save him.

But then, back in their secret underground lair (yes, the team has a bunker, probably because it was cheaper to film the second season there), a new version of their time ship shows up. Out step alternate-future versions of Lucy and Wyatt show up. They tell the team there is a way to save Rufus, and future-Lucy hands past-Lucy a version of Lucy's adventure journal, one with several new events written in it, all so the team can predict the future. With this knowledge in hand, the team might just have a way to save Rufus and, maybe, put an end to Rittenhouse once and for all. 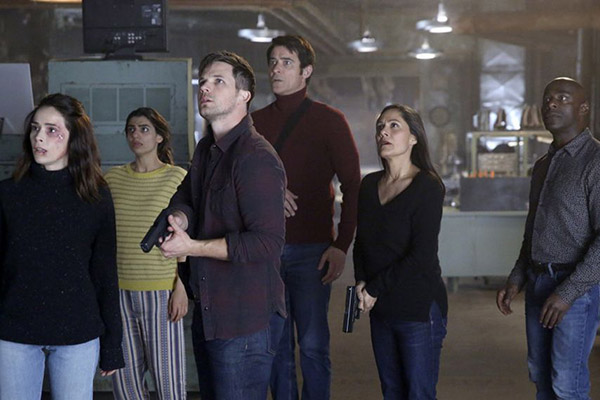 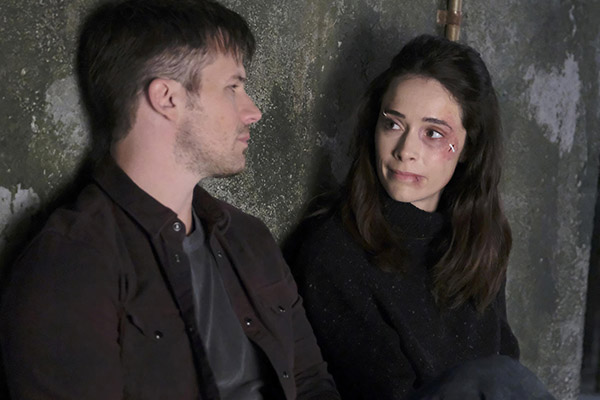 There's a lot going on in the finale of Timeless, so the show, for good or ill, decides to break the major plot lines -- saving Rufus and ending Rittenhouse -- into two different episodes. In the first episode the team has to go back to California 1848 during the time of the gold rush. Ostensibly they're here, once again, to stop whatever scheme Rittenhouse has in store (stealing a bunch of gold so they can be super filthy rich, apparently). The goal, though, is to find a way, somehow, to save Rufus after stopping Rittenhouse. However, the unofficial fourth member of the team, Garcia Flynn (Goran Visnjic), steps up.

People that have watched the whole show will remember that Flynn started as the big bad of the series. He stole the first time ship and used it to start making changes to the time line. His purpose was the stop Rittenhouse, but by stealing the ship he only set in motion events that would lead to Rittenhouse getting the ship for themselves and using it to cause further havoc on the time line. In the end, he sacrifices himself, stealing the ship and traveling to a different date so he can make one major change and, via the dominoes falling, save Rufus instead of leading to him getting shot. Flynn dies in the process of these events, but Rufus is resurrected, which is a win for the team.

Except the win is pretty hollow. I appreciate Flynn's sacrifice and I do feel like it neatly closes out an arc for the character. The problem is that it robs Lucy and Wyatt of big moment. They're sidelined during these events, and a huge moment where they could save Rufus and win the day is taken from them. Since they aren't even involved in Flynn's plan, they're absolutely inconsequential to the whole story. Lucy and Wyatt came back from the future to give them the journal and the means to save their friend, and they just sit on their hands while Flynn takes care of everything for them. Again, it's a great moment for Flynn, but a crappy moment for our protagonists.

But hey, there's still another hour of the show to go. The team is rebuilt but Rittenhouse is still out there. That means one more adventure in time to try and capture the agents behind the scenes. This leads the team to Korea, 1950, during the Hungnam evacuation. Unfortunately for the team, this mission is also a trap set by Rittenhouse -- the evil organization plans to kill the heroes once they show up in Korea, and then there won't be anyone to stop Rittenhouse after that. Thankfully the two non-time traveling members of the team -- DHS Agent Denise Christopher (Sakina Jaffrey) and original time travel inventor Connor Mason (Paterson Joseph), are on the case. They figure out pretty quick the fate for their team, so the only way to save the time travelers is for Agent Christopher to strike a deal with present day Rittenhouse. 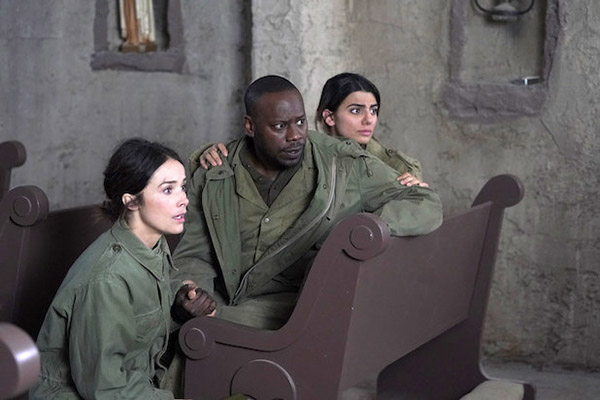 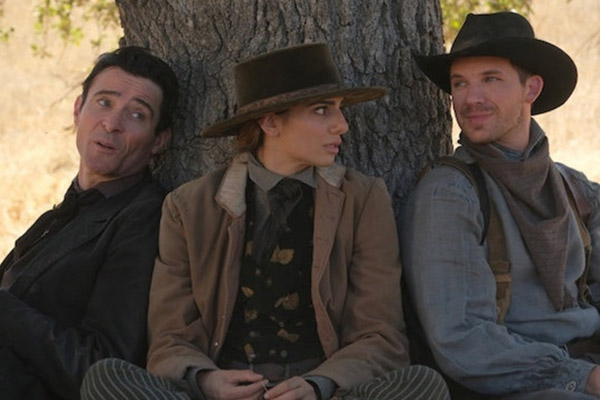 This will take some explaining since this is a lot of plot people just tuning in for the series finale (without having seen anything leading up to it) probably won't know. Essentially, Rittenhouse is an evil organization, but also a family run one. Certain wealthy families are all part of Rittenhouse, and they pass their membership down through the bloodline. Both Lucy's father and mother were secretly part of Rittenhouse, and they wanted her to be part of the organization, too. She learned this during season one of the show, and they fought against her family's past for much of the rest of the run. For Agent Christopher to save the team, she goes to Lucy's father, Benjamin Cahill (John Getz), strike a deal to save Lucy's life. He agrees, leads the DHS agents to the Rittenhouse home-base, and the evil organization is taken out. Then the DHS is able to travel back to 1950 Korea (using the stolen time ship) and save the day once more.

And again, we have a story where our heroes are totally inconsequential to the main plot. While our heroes are trapped in Korea, essentially waiting for death (without knowing its coming), the big plot line of the series ends without them. It just makes me wonder why future Lucy and Wyatt even bothered coming back when, clearly, nothing they said or did actually mattered at all. Everything on the show was going to wrap itself up just fine without any assistance from the main team. The heroes could have sat at home for two weeks, enjoying the Christmas holidays, and everything would have worked out the same.

Think about it like this: Agent Christopher, in an act of desperation, goes to Lucy's father to strike a deal and save her. Couldn't she have done that at any time? She could have faked historical evidence showing Lucy's death and struck a deal with her father at any time. In essence, from the moment Rittenhouse stole the time ship at the end of season one, Agent Christopher could have ended the threat at any moment. Basically, the Rittenhouse plot line is tied up too neatly and in such a way that you have to wonder why this wasn't the first thing they did?

After everything is tied up -- Rittenhouse is defeated and the heroes are saved -- the show goes for (in the parlance of Wayne's World) the "Super Happy Ending". Every main character in the series gets to have their own awesome moment as the show flashes forward a few years into the future. It sends everyone off on a good note, whether or not their endings were really earned or not. That is, of course, an issue with an ending like this: it's a finale that tries to wrap up another two years (or more) of story in just two hours, so a lot of things get betrayed, or cut short, and robbed of their significance. 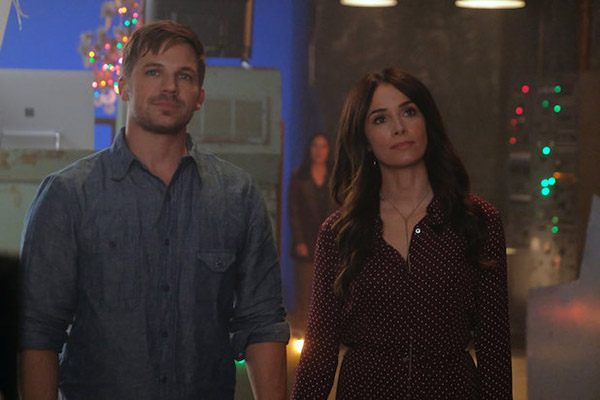 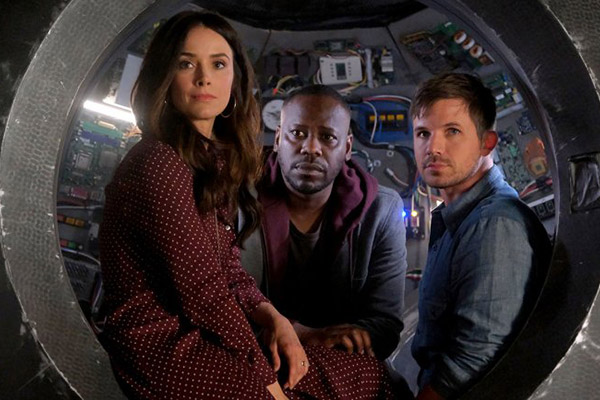 That's what leaves this finale feeling so hollow. I like the characters of Timeless I appreciate that effort was put in to try to give the show, as a whole, some kind of closure. But by trying to tie up everything, the show loses the ability to make anything stick with real resonance. It's nice to have an ending to the series, I just wish it had been a better ending (even if some of the super happy moment had to be sacrificed in the process).