Mars is a Cold Mistress

It's interesting to watch speculative fictions about near-future space exploration. Back in the 1940s and 1950s, movies about potential space exploration focused on the moon. Sure, those movies were really bonkers, trying to put aliens and civilizations on the moon as if there could be cities and people we somehow couldn't already see with a telescope. Still, despite how dumb those movies were, they fueled a need to get to the moon, so see just what was on there and to say "we've been here, in person." We did it, we we put a man on the moon. A few times in fact. 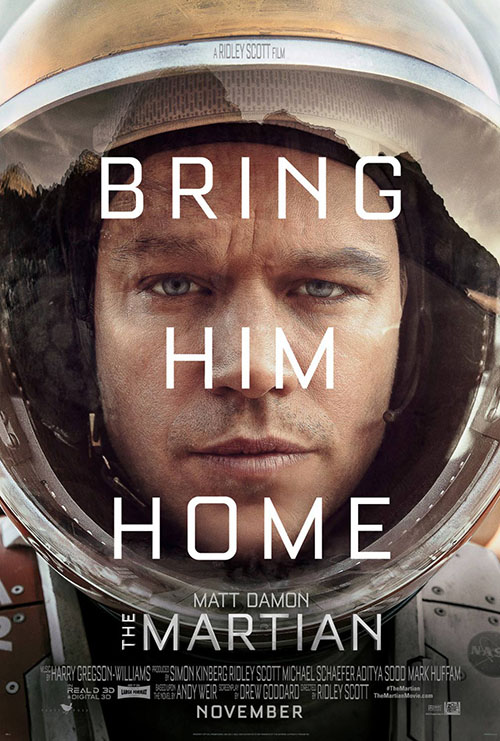 Of course, we then lost interest, but then so did speculative fiction. Once you've done something, the stories then have to be about something even bigger. The assumption of sci-fi was that, having gotten to the moon, the next stop would be interstellar travel. Of course, that's a big leap to make, something that requires technology beyond anything we can even comprehend right now (and the physics of such travel is currently impossible until an entirely new model of physics is invented, which is also impossible). Of course, in the last couple of decades, speculative fiction has turned inwards, looking at what might be achievable. A few movies about Mars have come out, with a couple of works much more recently. We just talked about The First, but before that we have the Matt Damon-starring movie The Martian, which made a case about how Mars is not only feasible, but something we should be doing right now.

At the start of the movie, the Ares III crew, already on Mars, is going about their work, studying rocks samples and making sure all their systems are functioning properly. The crew is expected to be on the planet for 30-ish days, but when a powerful storm comes rolling through, it puts their launch vehicle at risk and the crew has to abort. During the run through the storm to the ship, though, Mark Watney (Damon), crew botanist, is struck by a satellite dish and blasted across the Martian soil. His comms go off-line and his life readings cut out. The crew has to presume he's dead, so they launch and head home. Unfortunately for Watney, he wasn't dead and now he's stranded on a inhospitable planet with only enough food for a year, no way to communicate with NASA, and no way to either get home or survive on the planet for four years until the next mission can reach him. He has to figure out a way to change the odds of survival, fixing every problem he has until someone can come save him.

Based on the book of the same name by Andy Weir (which was itself originally written as a collection of forum posts, logs from Watney himself), The Martian is a surprisingly faithful adaptation of the book, keeping in much of the science about an astronaut living on Mars by himself. The plot is, of course, tightened and shrunk down to turn a novel-length story into a feature-length film but the meat of the story isn't compromised or made too Hollywood, which would have ruined what worked so well about the book: it is, essentially, a realistic portrayal of what one man would have to do in these circumstances.

That said, I do feel like we need to get a big sticking point out of the way from the get go, and this is a problem in the book as well as the movie. Realistically, as even the author himself has noted, the storm that sets off the chain of events in the movie couldn't occur on Mars. The atmosphere is too thin to produce a storm of the magnitude discussed in either version of the story, but there just aren't a lot of dangers like this on Mars that could cause a mission such as the one depicted to go south and leave a single crew member alive on the planet but with enough supplies to find a way to survive. You either have to accept the bad science of this one point as is, or you find a reasonable explanation (like maybe a storm was compounded by asteroid strike or something -- I'm an artist not a scientist). If you can get over this one hump, the rest of the story moves along at a brisk, realistic clip. 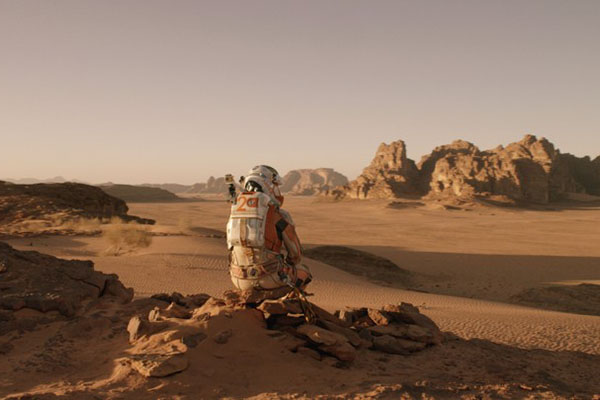 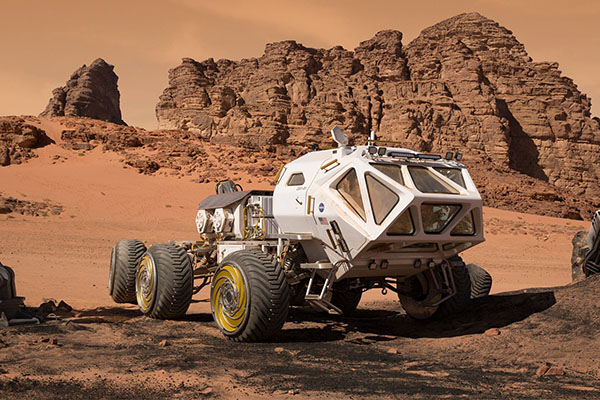 And, to the layman, everything does seem pretty realistic as depicted in both the book and the movie. Weir went out of his way to do research on all the necessary science for the book, trying to make it as "hard sci-fi" as he could, even talking to NASA guys to figure out the meat of his story. It gives the novel an air of possibility, a story that could easily happen if we could just launch people to Mars.

The movie wisely compound this, keeping everything movie as close to current technology (or possible current technology) as it can. This is unlike The First which not only has a fictional private company in charge of the mission (instead of just NASA) but also a lot of futuristic tech on display like hovering holoscreens, ear-based phone-pods, and all-electric vehicles everywhere. The difference between the realism of the two is night and day, with The First feeling like one possible, distant future and The Martian being a story that could be happening today. Put another way, The Martian depicts a space program we should be doing right now (even if, in the process, we also accidentally strand someone on the planet).

Of course, the hook of the "one man stranded on a distant planet" is a great storytelling device. Never once, though, does the movie raise a question of, "why are we sending people into space?" There's never a question that the science is important, that the fact that Mars is out there for us to study is valuable. These are the kinds of stories that need to be told, to get people used to the idea that Mars is an eventuality, that we will go there, that we must.

But it's also just a great piece of popcorn, blockbuster cinema, and much of that comes from Damon himself. One entirely half of the movie is dedicated to Watney and his travails on the planet. This is his show, essentially a one-man play of Mark and the planet. Sure, it's broken up by NASA and all the cast members that make up that side of the story. Damon, though, gets to play the full range, from stranded explorer to jubilant colonizer, excited space pirate to depressed man on the edge of death. It's no wonder that Damon was nominated for an Oscar for his performance (and won a Golden Globe as well in the process) as his performance is so good here. 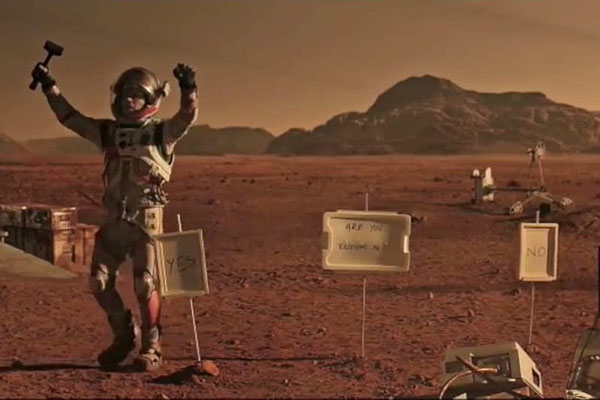 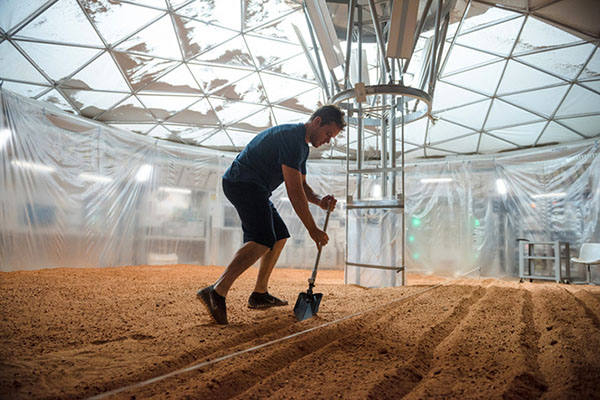 There are plenty of other great cast members here, although I do feel compelled to call out a couple of questionable cast choices. Although I think both Chiwetel Ejiofor (as Vincent Kapoor) and Mackenzie Davis (as Mindy Park) do fantastic jobs with the characters in the film their casting, in both cases, is indicative of Hollywood's reluctance to cast people of color. Park is a common Korean name and most fans of the book took it as a guarantee that Mindy Park was of Korean descent. Sure, it's never explicitly said in the book, but then aside from the German astronaut lent to the crew of the mission from the European Space Administration, no one's nationality (or color) is ever noted. Casting Davis, a great actress who is also as pale and Nordic as you can get in the role is questionable at best and smacks of whitewashing.

Chiwetel Ejiofor on the other hand, is black so we can't say his casting is "whitewashing". However, he is a British Nigerian, not of Indian descent, and Kapoor is a distinctly Indiana name. There are plenty of Indian actors in Hollywood, any one of them who would have been great for the role (and many of whom struggle to find roles in Hollywood because of their color and nationality). Ejiofor, though, is famous and, as the joke goes, if Hollywood can't cast a white man for a role for some reason, they'll pick the most famous black man they can over anyone of any other race. This decision here seems exactly like that. If Hollywood wanted Chiwetel Ejiofor for a role in the film, why not make him the NASA director (instead of Jeff Daniels, a great actor but also a white dude) to send the same message of inclusivity I think they were trying, and failing, to convey.

Again, everyone in the movie is great and I have no qualms with their performances -- the actors are fantastic, as was their acting. I just think the casting of the characters was questionable, ad I've thought that since I first saw the movie in the theater. It felt off then and I've never really gotten used to it, no matter how many times I've watched the film.

I have watched it a lot. More than once in the theater, and repeatedly on home video once I picked it up. I'm even considering upgrading it to 4K UHD now that I have a player for that just to see if in even brighter, crisper color. The film is worth buying repeatedly, both as a blockbuster and as a hard sci-fi speculative story. You'll get sucked in by the film and stick around for both the science and the adventure. And then, after watching the movie you'll pick up the book -- I recommend both whole-heartedly.