It's a Show About Mars With Barely Any Mars

What would it take to get to Mars? What does it cost, and what are we, as a species, willing to spend to achieve that goal. Since humans have never been to Mars (hell, after going to the Moon a couple of times, we haven't gone there in a long time), the question is "if" not "when" it will happen. There's no guarantee the U.S. Government will ever back a NASA plan to go to Mars, not really, nor is there a real, solid plan to get there from NASA right now. There are pipe-dreams, to be sure, but nothing realistic. 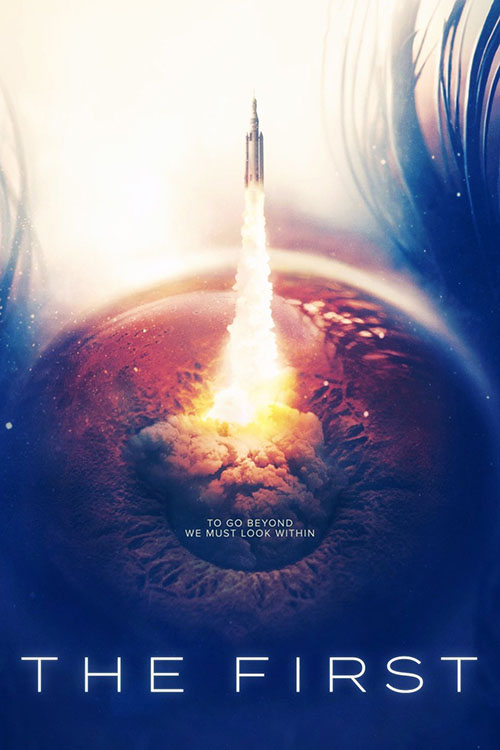 The reason for that, of course, is cost. Cost in lives, cost in resources, and cost on money. Really, it's the last part that most politicians get caught up on, and without an adversary (like the Soviet Union) to beat, there's no reason to force ourselves to spend that kind of money. The argument, of course, is that a mission to Mars fuels the technology that could be used to go further, faster, better. Asteroids, moons around Jupiter and Saturn, and then maybe further. If we ever want to be able to secure humanity beyond the bounds of this blue marble to make sure that we'll live on even if this planet dies, we have to look to the stars and start building that future today.

This is an idea that is, all too briefly, touched upon in the new Hulu series "The First". At the start of the series the first manned mission to Mars, a joint production between NASA and a private corporation, Vista, launches, only to explode in the air above Earth. A simple error caused the whole affair to explode, killing five astronauts, and then the U.S. government freaks out, tries to cut the funding, and make it look like the whole affair is a big mistake. During the hearings about the project, Vista CEO Laz Ingram (Natascha McElhone) talks about what humans are doing to our planet and our need to guarantee our own future survival. And then that idea is shot down by a group of Senators and never brought up again.

While the motivation to get to Mars is good -- to save ourselves, to further research, even simply because it's there -- none of that really matters on The First (which, really, the true "first" exploded in mid-air, so the title of the show is grossly inaccurate). Instead, the mission is filtered through the perspective not of the crew as a whole, not really, but one specific crew member: Tom Hagerty (Sean Penn). Hagerty was supposed to be the commander of the ill-fated first mission, but his daughter relapsed into drugs, Hagerty became unreliable, constantly having to tend to her, and was cut from the mission. He's brought back in to give an air of experience to the second Mars mission, and we get to see a lot about him, his daughter, and all their hand-wringing about if going to Mars is the right thing for him specifically.

I get that a show about Mars is going to seem "brainy", that we need an in to get into the series. The problem is that Hagerty is the worst character on the series and focusing on him drags down the whole affair. He's a mopey, sad, depressing mess, and that's because he's given a "tragic back-story" to somehow make him relatable (I'm sure that was the goal, anyway). His wife of 18 years killed herself, and his daughter took it very poorly, drifting into a life of drugs and overdoses. He says, repeatedly, that his daughter is the most important thing to him, except, no, not really. If that were the case, he'd drop the whole Mars mission, give it to someone else, and focus on his daughter full time. But as she rightly assesses at one point in the first season, he'd hate her and blame her if he stayed behind. He's written to both care about her and be a selfish ass. 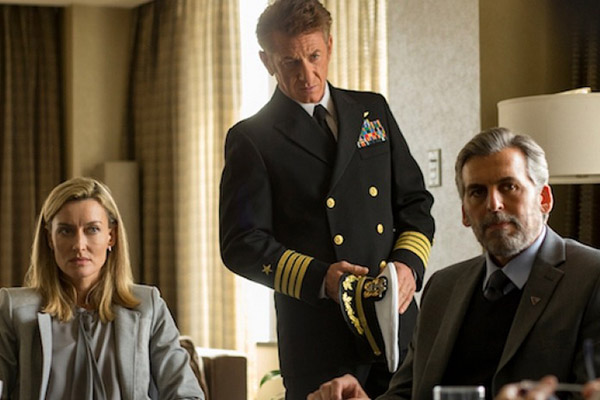 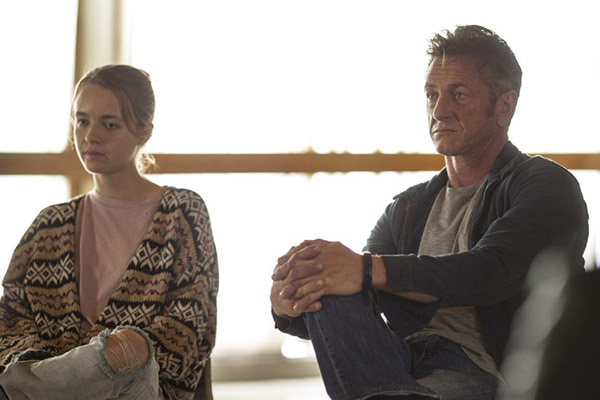 Or maybe that's just the performance. Sean Penn may be a great actor, beings two-time Oscar winner, but I have to say in this role he was probably the worst choice. He plays Hagerty as a sad-sack mess, always with a depressed look on his face and grey cloud over his head. during the whole season I'm not even certain he cracks a smile once. I'm not saying the character had to be quippy, but actually showing any kind of rage of emotions at all would certainly have helped him seem more relatable.

Not that his daughter is much better. Denise Hagerty (Anna Jacoby-Heron) is written to be just as depressed and joyless as her father, and while a lot of this can be explained by seeing her mother die and then the constant relapsing into drugs, it certainly doesn't make her any easier to like. It's as if the creator, Beau Willimon, wanted to try and create the saddest main characters possible just to see if audiences would stick around.

And it's not like the show doesn't have great, interesting, relatable characters. All of the other astronauts on the series as way more relatable, played by great actors. They laugh, they cry, they express real emotions beyond constant, terminal depression, and if any of them had been the lead for the series I would have enjoyed it so much more. Hell, even the icy-cold CEO, Laz, is more relatable than Penn's Hagerty, and she's written to be some kind of robotic, unfeeling, female Elon Musk -- hell she even jokes about people thinking she's a robot -- and she expresses a better range of emotions than Hagerty.

If the series could have gotten the second crew off the ground and into space quicker, maybe I would have thought it was a better show. The first season is 10 episodes long and we only finally get back into space in the last-half of the last episode. That last section is pretty great, and now that the astronauts are up there, I'm sure the episodes moving forward will probably be better. Maybe. I mean, there's probably a way for the series to continue to be depressing as hell, but I'm hopeful that actually being in space will give the series the needed kick in the ass to be enjoyable. 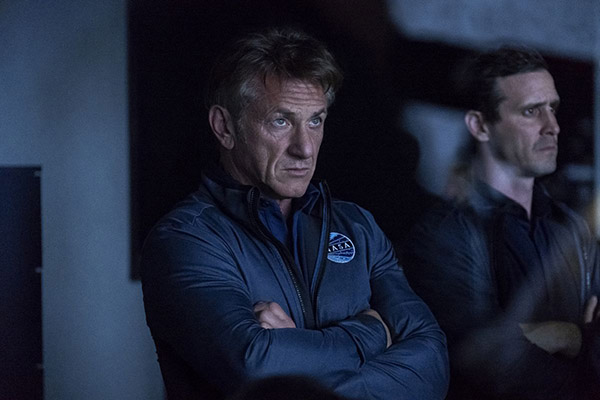 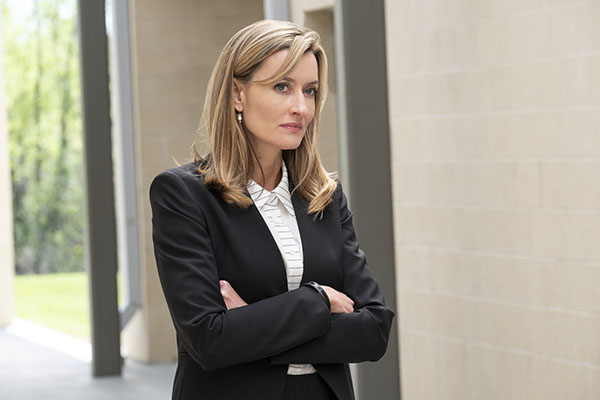 Even this episode isn't without is glaring flaws. The first ten minutes are painful to watch as the episode tries for unearned artsiness and poignancy. I was so irritated by the opening section I almost turned the series off, one episode from the end of the season. Worse, there's this whole recurring motif throughout the season that implies the opening rocket explosion, and some of the other technical difficulties the crew runs into, are due to sabotage. Maybe. It's hard to tell because it's done in an artsy way and could just as easily be a metaphor that was filmed in such a way as to go right over my head. There's certainly no pay off to it and that whole section could have been excised and the series wouldn't have been substantially different (maybe a little better in fact).

I wanted to like this season. There are moments in the season where it actually gets kind of good and interesting, even enjoyable. There just isn't enough of it to carry the weight of the actual series. If you feel like watching a show that purports itself to be The Martian but, in reality, has none of the humor, zippiness, or grace of that movie, then give this a spin. Better, though, would be to just wait until the second season rolls out (if it gets one), and then just watch the last 40 minutes of the last episode of first season. Skip the rest -- you'll be happier if you do.