They Came From Another Dimension

While I like a lot of sci-fi, I will acknowledge that I'm not a huge fan of kaiju films (much to the chagrin of one-time site contributor Josh Shaffer, an avowed kaiju fanatic). While I can certainly see a certain appeal in watching dudes in suits pretend to be giant rubber monsters stomping through little models of Tokyo, it's just not a genre I've been able to get into. I saw the most recent Godzilla flick (the 2014 Hollywood production) and was just bored. Big monsters stomping on things is not enough for me. 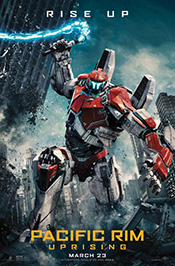 This might explain why I also couldn't get into the original Pacific Rim film. While the movie was certainly well made, with cool kaiju and awesome looking giant robots (jaegers, in the movie's parlance, which is apparently and actual word meaning "hunter" or, at least, "the rank and costume of a hunter"), I just didn't get into the action. The jaegers had weight, and the CGI was really well done, but the film felt shallow to me. Everyone I knew raved about it, but I thought it was only okay at best.

Still, when I saw the sequel on sale on Blu-Ray I figured, at a minimum, it would provide more eye candy. And yes, the film certainly delivers on the "smashy-smashy robots" the genre promises. What surprised me was that I actually cared about, and enjoyed, what was going on in the sequel a whole lot more. Critics had been harsh on this movie but I actually liked it better than the first film.

For those that haven't seen the first Pacific Rim, essentially there's been a war going on between Earth and a land on the other side of an inter-dimensional rift. The rift sits open at the bottom of the Pacific Ocean, and out of this breach come the kaiju, giant monsters that spread out to the cities around the Pacific Rim (title drop) attacking cities and laying waste to everything in their path. To combat these monsters, jaegers were developed; giant robots the size of the kaiju that require two pilots to control. These pilots have to be specially trained so handle the burden of the robots as, essentially, they plug themselves into the "brain" of the bot (and their co-pilot), and move in-sync, robot and pilots, to fight.

As this is a sequel, it should come as no surprise that the heroes of the first film are able to eventually beat back the increasing kaiju threats until, eventually, finding a way to seal the rift and save Earth forever. Well, or so they thought. In Pacific Rim: Uprising, it's been a number of years since the end of the war. With the jaeger fleet aging, and pilots increasingly hard to find and train, a Chinese company, Shao Corp., has developed drones, giant robots that threaten to make the jaeger obsolete. However, some new type of giant robot shows up, attacks a government conference, and kicks off a series of events that eventually leads to a resurgence of the kaiju threat (including new breeches across the Pacific Rim). The jaeger pilots will have to jump back in their ships and go out to save the day once more. 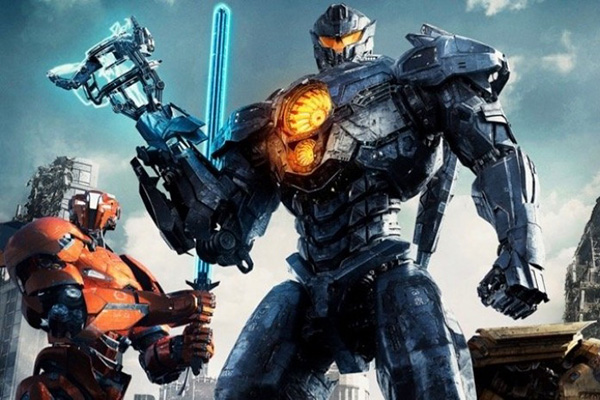 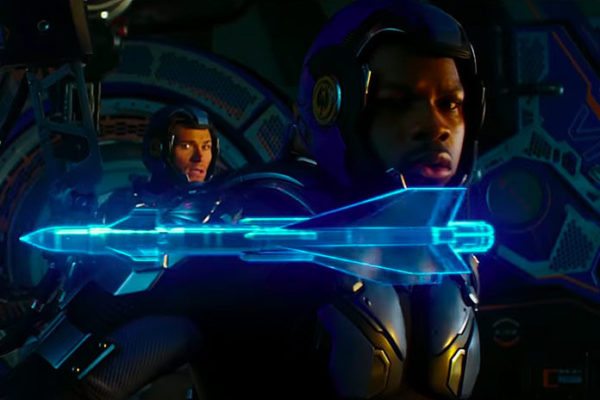 There are some fair criticisms that could be leveled at Rim 2. For starters the plot is pretty shallow. Seeing a world at peace is a different kind of plot from one that's dealing with a years-long war. The story is less expansive, forcing the writers to focus on a small number of cast and their personal problems. It also relies heavily on tropes such as the "reluctant hero" (Jon Boyega's character, Jake Pentecost), "scrappy tech-know-it-all kid" (Cailee Spaeny's Amara Namani), unnecessary deaths, and suiting up for revenge... the list goes on. No one is going to accuse this film of being smart or fresh, but in a movie such as this -- smashy-smashy robots and monsters, remember -- I don't know if that's a big deal.

The one character we do get to focus on, trope-ish as he may be, is well acted and fun to be around. Boyega imbues Jake with charisma and humor, making what could be a pretty aggressively obnoxious character (out on his own rejecting the life of a jaeger pilot until he's forced back into it) into someone you actually end up rooting for. This is all down to Boyega as the character is terribly written and if not for the actor this movie would lose the heart of it's main character, and it's soul. Everyone in the cast revolves around Jake and however bland they may be on their own, they get elevated by Boyega.

And wow, yeah, the rest of the cast is pretty bland. Spaeny's Namani is supposed to be a street-smart orphan who can pull the rest of the team out of any jam. Spaeny, though, doesn't quite seem up to the task and bringing her character to life. She still has more personality than Scott Eastwood and his jaeger pilot, Nate Lambert. Eastwood certainly has the Hollywood good looks that producers seem to like, but his personality is about as wooden as whatever substance they chiseled his good looks out of.

Then there's the obvious, Hollywood mandated love triangle inserted half-way into the film. Boyega's character is interested in a girl that's also interested in Eastwood's pilot. And that's about it. Clearly this plot was supposed to lead somewhere, but there's no resolution, no need for it to be here, and all it does is give some random actress a couple of lines before disappearing from the film completely. 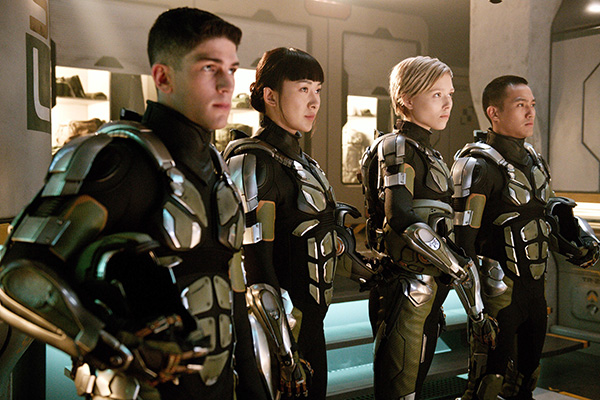 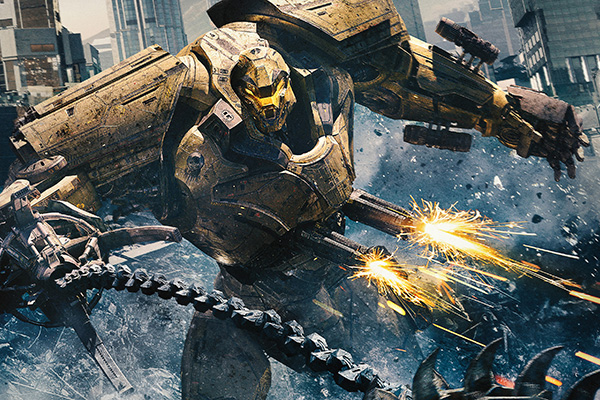 And yet, man do those robots smash good. The action is right up there with the first film, and there's enough variety in the jaegers and the monster they fight to keep interest up during the action sequences. I really did enjoy the robot-on-monster fight scenes which have satisfying crashes and smashes and then end before they go on to long.

So sure, yes, the film is dumb, and not well written and I still enjoyed it. Why did I like Uprising when I couldn't get into the first Pacific Rim? I just don't know, but I did. Maybe your mileage will vary. I just know that if you want good robot action and a pretty fun lead character, you've got a winner here in Pacific Rim: Uprising.