This Seems Like a Really Terrible Plan, But... Okay!

Originally I intended to talk about Ocean's 8 in this column -- I did cover the previous movies and it all setup for me to hit the theater and see a flick. I still went to the theater, but apparently Ocean's 8 is already gone from theaters in my area, so I had to find something else to watch. Thankfully (at least for me, anyway) there was The First Purge playing so I grabbed a ticket and went in. 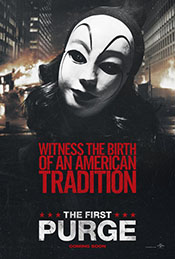 I've watched all the Purge movies before this one but not in theaters. Honestly, I don't like going to see horror films in theaters. You need the right ambiance to be able to get into a good horror flick, which either entails total quiet so that nothing distracts you from the really tense film rolling before you, or the ability to be loud and make a ton of comments because the film you're watching sucks. When you watch it in a theater you're unable to be loud if you need to, but at the same time you're at the mercy of everyone else around you being good theater goers if the film is actually awesome. I'll see superhero flicks on the big screen to appreciate their special effects, but horror I watch at home. Normally.

Since I saw The First Purge, though, we probably should look back at the series to get a run up for this one. The first The Purge was a pretty mild home-invasion thriller starring Ethan Hawke and Lena Headley. The film is less remembered for what happens in the film that for it's setup: once, every year, the U.S. allows a 12-hour window where all crimes, no matter how heinous, are allowed. Against that back drop, we watch one family lock up their house super-tight with a high tech security system, only to then have a bunch of masked ruffians break into the house and terrorize the family. The setup is certainly interesting, and Ethan Hawke should be given credit for acting the hell out of the limited material he was given, but the film really wasn't very good. Still, the hook of "The Purge" was enough to propel it to make money, and a franchise was born.

A year later saw the release of The Purge: Anarchy. Moving the action from a single house to the streets of Los Angeles. This change of location not only opens up the setting but gives the whole movie room to breathe and adapt. Instead of a claustrophobic thriller, Anarchy is a straight up action movie. Having gone back and watched the Mad Max movies, I see shades of parallel between Anarchy and the first Mad Max -- a society on the brink, with lawlessness everywhere, and a whole bunch of action.

There's also a political undercurrent to the second Purge that was largely lacking from the first. We get to see more of how the Purge itself plays out, how the ones most affected by it are the lower-classes, namely the minorities. Those who can afford protection (like the family of the first flick) are usually safe, but if you don't have the scratch, you're probably going to get picked off. Even without the politics, though, Anarchy is a much better flick all around than the first one. The action is tighter, the set-pieces bigger, and it's all anchored by a great performance by Frank Grillo. If you already know the concept of "The Purge" (and, really, who doesn't?), skip the first film and start with Anarchy when you're watching through the series. 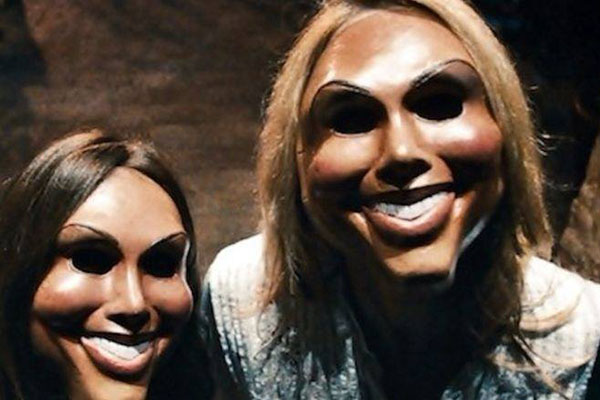 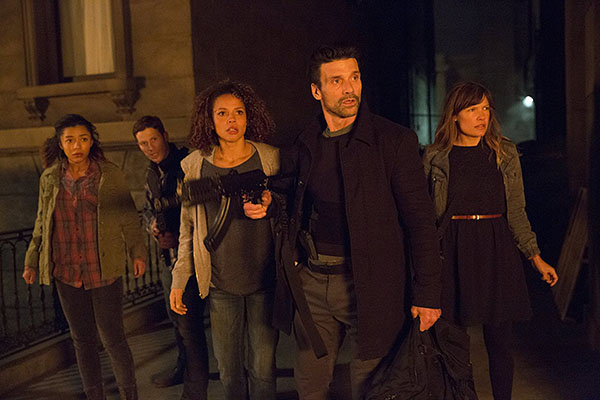 The politics of the series is played up ever more in the first film, The Purge: Election Year. Released two years after Anarchy, the third film sees the return of Frank Grillo's character, now working security Senator Charlie Roan (Elizabeth Mitchell). An outspoken critic of the Purge, the senator is running for president on a platform of eliminating the bloody event altogether. This has made her a lot of enemies, including the current president and other powerful members of the political party behind the Purge, the New Founding Fathers of America (NFFA). it all leads up to the Senator's secured compound being attacked by NFFA-hired mercenaries, leading the two lead characters to take to the streets to survive the night (and maybe help bring down a political regime in the process).

While the story is better developed in this movie, Election Year wasn't nearly as impressive to me as the second flick. It's another "run through the streets" survival fest. While well shot it's doesn't add much new to the whole affair. All the setup is in the beginning (and the pay-off in the end), and most of the middle act feels a lot like Anarchy. It's still a decent flick but it doesn't push the series forward in the way anarchy did over the first Purge.

This, of course, leads us into the newest entry, The First Purge (or, as I like to think of it, Purge 0). Going back all the way to the beginning, The First Purge shows us the setup for the very first time the annual event was ever fun. Set on Staten Island, the initial "Experiment" (as it's called in this movie) is set in a single location. The citizens of the borough are paid to stick around (5 grand each) so that they can be part of the scientific study of if a "release of societal norms" helps to ease the stress of life in this modern era and, by extension, would then make everyone happier. While there's much talk in the movie about "the science of it", even the film doesn't believe its own setup. The people in power clearly know this is essentially a way to let white people kill minorities, and the film knows we know this. We've seen the previous films, so why sugar-coat it?

The First Purge does a few new things for the series that did like. This is the first film with a predominantly-black cast without any white people in lead roles (all credit to Grillo in his films but for a series that's become about the lower-classes getting attacks by the people in power, having a white lead did detract some from that message). Like Election Year, there's a fair bit of time on setup for the story, but there are little twists (like the scientific study, and the media reports on the "Experiment") that help the angle of the film feel fresh. 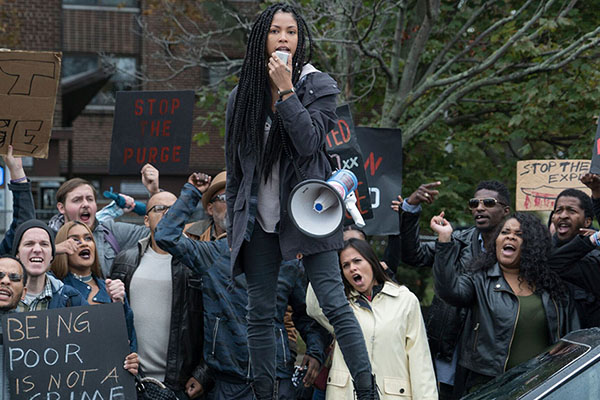 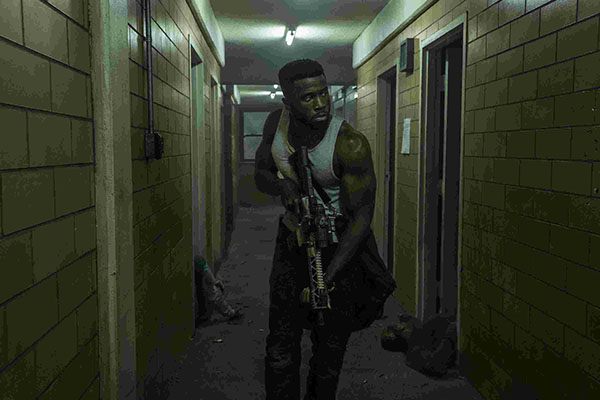 That said, some stuff doesn't quite click. One of the main characters is a gang-leader/drug runner. He's setups someone that needs some kind of awakening or someone that should pay for their sins by the last reel. He doesn't have that big an arc, though, and it never feels like his story gets the right kind of payoff for all the setup. There's also a comically over-the-top villain of the streets who is setup as the big bad but, in the last act, all but disappears. Little things like this make me wonder if the ending of the movie wasn't tinkered with in reshoots or studio-mandated edits before final release.

Still, on the whole, the flick was pretty good. It delivered exactly what was in the title -- a Purge, and the first on in continuity. It's still a Purge movie, though, so if a horror movie with lots of kills and a political bent isn't your thing, you're not going to find much to love in this fourth installment. For the rest of us, though, the fans of the series, this movie delivers exactly what we've come to expect.