Down on the Farm

I will play a number of different kinds of games, although there are some genres that usually don't hook me. I dig on platformers and adventure games, and some of my favorites are RPG. Shooters don't normally grab me, aside from the occasional Borderlands. While I've dug on some simulation games, like SimCity 2000 and (deepest, darkest addiction) Rollercoaster Tycoon, the farm section of the sim genre never really hooked me. I know people that swear up and down about Harvest Moon and its various sequels, but any time I've tried to play those games I've always ended up bored. 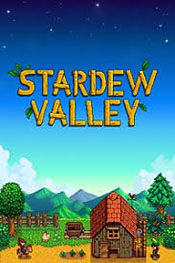 Still, a while ago my wife got into a farming sim on the recommendation of one of her friends. She grabbed it on sale from Steam and started giving it a whirl. I, meanwhile, ignored it because (a) it was a farm sim and (b) it had the name "Stardew Valley" which sounded, well, girly. Not the fun kind of girly, either, with ladies going on missions and doing puzzles and killing things. Super Princess Peach, for instance, is a game with a girl that uses pastel colors and the like but isn't what I'd really consider "girly". If the game features ponies in it, or rainbows, and sounds like it was meant for a stereotypical 6-year-old girl, it's girly. The name "Stardew Valley" sounds girly, and I pre-judged the game because of it.

But my wife had fun with it. A lot of fun. She kept telling me about the things she was doing in it. Eventually I got intrigued, logged on to her Steam account when she wasn't playing, and gave the game a whirl. Despite the name, this is not a "girly" game. It is cutesy, sure, and I might even go so far as to describe certain parts of it as "sweet", but underlying the friendly exterior there is a pretty deep little sim game that's surprisingly addictive.

In Stardew Valley you play an adult (man or woman, your choice -- and, like I do in so many games, I chose a woman just to see if there were any differences in the storytelling; there weren't as everything is pretty generic) who has gotten fed up with the rat race of their office job. That's when you get a letter saying that your grandfather has died and left you his old, dilapidated farmland in his will. Your job is to go to the farm, clean it, fix it, farm it, and make a life for yourself in the land of Stardew Valley. Oh, and while you're there, you should go talk to the townspeople, help fix up the local community center, and maybe even find love and start a family.

For the most part, the basic activities you'll engage in will seem fairly similar to anyone that's played a Harvest Moon-style farm sim. Your first few days will be spent tidying the farm, breaking rocks and scything down weeds, all while tending to a small selection of seeds you were given for free. Once you feel adventurous there are plenty of other diversions to engage in, from fishing to raising animals, and eventually you can also start cave diving in the mines. 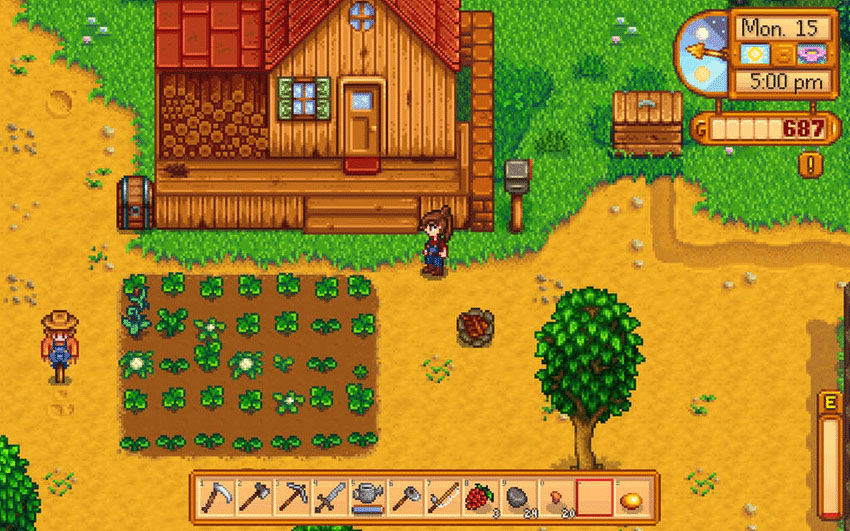 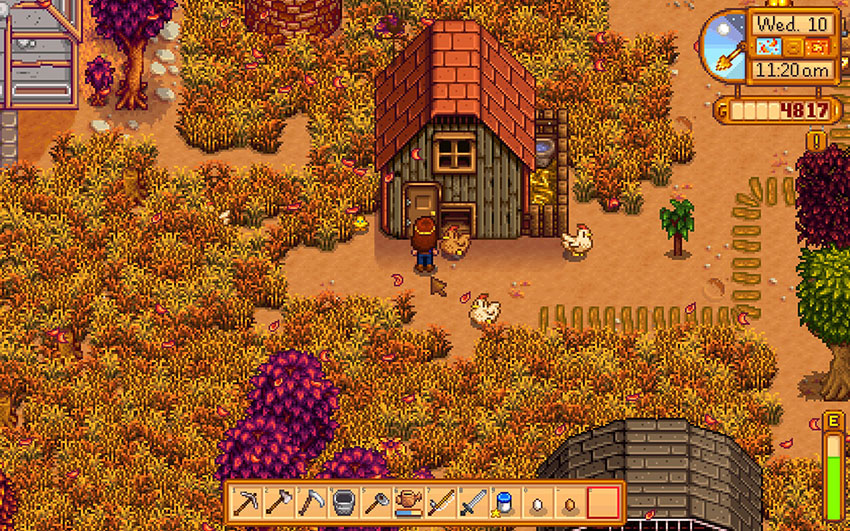 The game is pretty open-ended in the way you can accomplish your tasks. Once you unlock the community center early in the game, that section of town will give you checklists of things to do as you wander around (collect this thing, that thing, grow these things). As you do various things around tasks you'll find yourself accomplishing the tasks at the community center, but it all just kind of happens organically. You can easily take care of stuff at your own pace and the way you want.

My wife, for example got pretty deep into the farming while she was playing it, spending her days on the farm growing crops and tending to animals. I, meanwhile, used the farming as just a way to kill time between my trips to the mine. The mine is a section of town near the north side, and going in gives you a chance to break rocks for minerals as well as fight monsters. It makes the game feel less like a farming sim and more like an adventure game, while I liked. Whenever there was time to kill, I'd venture off to the mine to break rocks, skulls, and whatever else I found. It was great fun (and a good source of cash I could pour back into the farm).

The nice thing was, despite the fact that we both played the game very different, we both still felt like we got the Stardew experience. It never felt like either of us played the game "wrong", just different. And since there was no long-term time limit to finishing the game, it didn't matter what order we did things in.

Some of you reading this might be screaming, "there is a time limit! Your grandfather will come back!" And, yes, that is technically true. At the end of two years (broken up into four seasons, one month per season), the ghost of your grandfather will return to the farm and judge your progress, giving you a rating. Fear not, though -- unlike the "end of game" sequence in the early Harvest Moon games, your time in the Valley isn't over once grandfather returns. After he rates your progress you can continue life on the fame, improving things. You can then go to the ghost's shrine and ask him to rate you again. You may only have two years to start, but then you can just go on playing as long as you like without penalty. 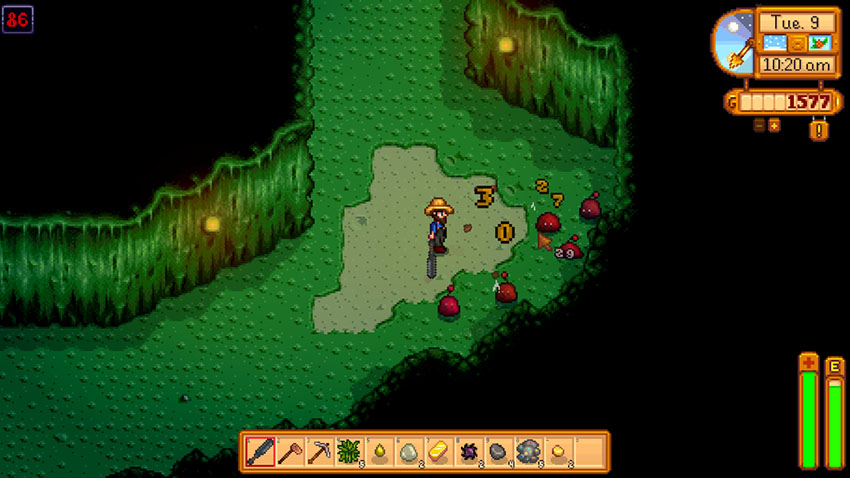 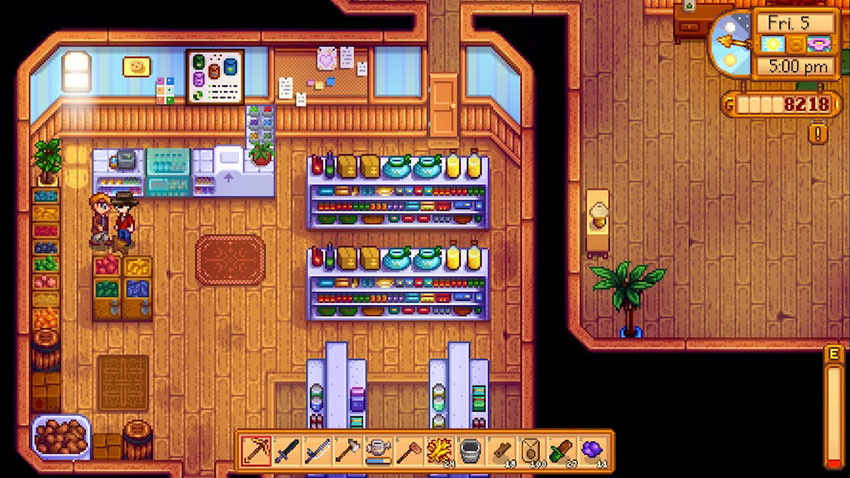 And you will, because this game hooks you in and never let's go. It is crazy addictive all just because the tasks you do are easy to accomplish and the days can quickly pile up as you keep getting good work done. It's pretty common to hit the end of a 15-ish minute day, say "oh, I can play just one more day, get these things done" and then, in-game days later you look up and suddenly realize is 3:00 AM next Friday and you were supposed to be at works days ago. This game is evil like that.

By this point I'm sure plenty of you have already seen the game, heard about it, and already decided if this is the kind of game for you. As someone that normally can't stand these games though, I do think you should give it a chance if you haven't already. It's just deep enough to make you think, with enough tasks to keep you playing, and addictive in it's continuing cycle of "things to do, things to do". As much as I resisted it, this has grown to be one of my favorite "go-to games" when I need to kill time and want something relaxing to play. Heck, it's one of the few games I've bought multiple times (right up there with Chrono Trigger and Diablo III).

Take a visit to Stardew Valley. You won't be disappointed.