Keeps Your Eyes on the Prize

Reading various news articles recently, I stumbled upon a tidbit I hadn't heard before: one of the original ideas for Ocean's Twelve (as opposed to the film we ended up with) was to introduce the fathers for George Clooney and Brad Pitt's characters, fathers who had been grifters in their own time. The important part of this news, for those in the know of past cinematic history, was that the producers wanted to get Paul Newman and Robert Redford to play the dads. If you aren't aware of classic caper films, Newman and Redford starred in The Sting, a 1973 film about a couple of grifters getting a gang together to pull off one elaborate, fun, and stylish heist. You know, essentially the idea of the Ocean's Eleven remake as well. 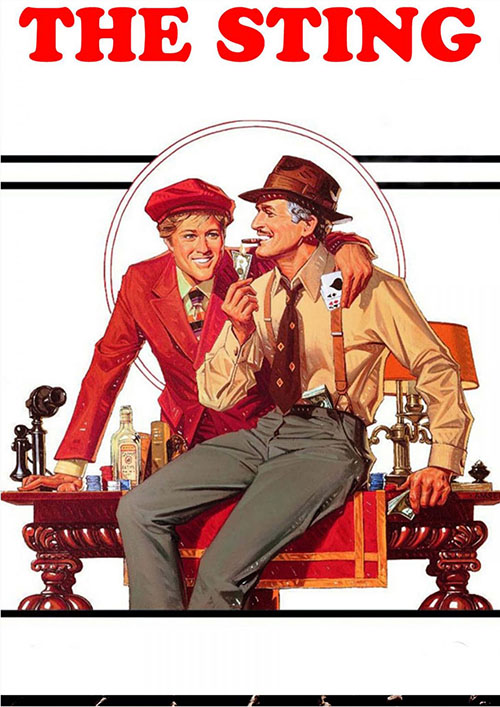 Obviously that didn't happen, but just reading that news put me in mind to finally watch The Sting. I will admit that I don't tend to watch much cinema from before 1980. Although there are classic films out there from prior decades, and I will pick and choose my way through those films (mostly the Universal MonstersThis franchise, started off with Dracula and Frankenstein in 1931, was a powerhouse of horror cinema for close to two decades, with many of the creatures continuing on in one-off movies years later. movies), I tend to find most older cinema, especially from the 1970s, to be dull. The pacing is off, the movies overly long, and I find it hard to sit through these works. Still, if this was a film that helped inspire Ocean's Eleven (more so, stylistically, than the dreadful 1960 Ocean's 11), that had to be something to watch, right? Thankfully, it really was.

The film opens with a grift, as you'd expect. We meet Johnny "Kelly" Hooker (Robert Redford), as he, with his partners Luther Coleman (Robert Earl Jones) and Joe Erie (Jack Kehoe), con $11 Grand off an guy in the middle of the street. This being the 1930s, $11,000 is a lot of dough, and the three go off to celebrate their windfall. The only issue is that the guy they conned worked for crime boss Doyle Lonnegan (Robert Shaw), and Lonnegan can't let anyone pull a fast one on him or his men. He sends his boys around to take care of the guys that robbed him, killing Luther. Hooker beats it, going up to Chicago to meet with one of Luther's associates, a retired grifter named Henry "Shaw" Gondorff (Newman), while he let the heat die down back home.

Although keeping his head down would be the smart play, Hooker wants to get revenge on Doyle for Luther's death. He convinces Shaw to work on a big score, something that would really hit Doyle where it hurts. One big score to bring down the big man. It's the kind of score to end all scores, an elaborate heist with layers upon layers, all while walking the victim right into his own trap. These two con men are good at what they do, slick and stylish to a tee, but can they really get a man this bad to part with his money and not come back for revenge?

The Sting is setup as a kind of ensemble film, one with a lot of characters each handling their own parts of the bigger score. In that regard you can see how it served as an influence on the Ocean's SeriesAlthough the franchise began back in the days of the Rat Pack with the original Ocean's 11, the franchise truly gained prominence with the Clooney/Pitt-starring, Soderbergh-directed Ocean's reboot series from 2001. The daring criminals would go on to have several cool and stylish capers through the series, redefining the heist genre in the process. series. You have a lot of great character actors, each doing their smaller bit, while two charismatic leads guide the viewer through the film. It gives you strong characters to focus on while letting the ensemble carry you through all the moving parts of the bigger production. It's slick and it works so well. 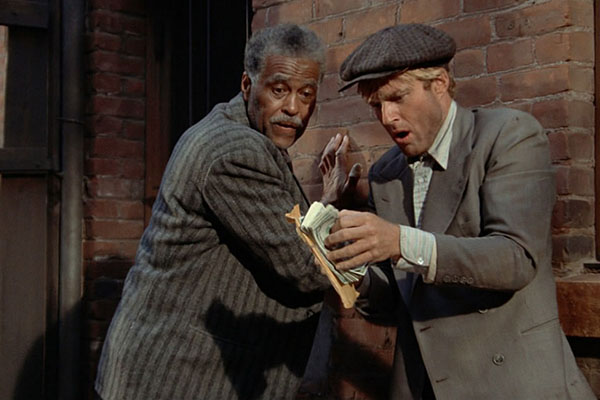 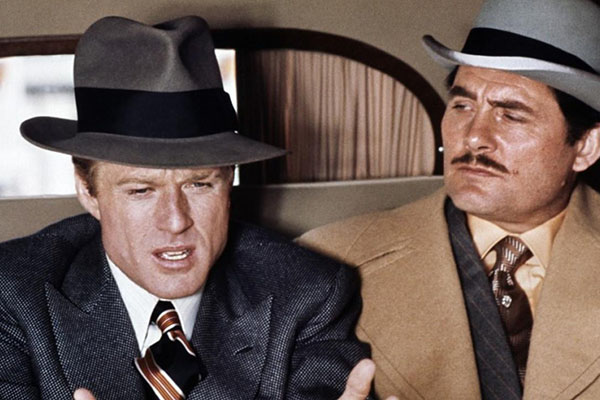 Credit, of course, is due to the leads, Redford and Newman. Redford gets the meatier role of the two as his character has more development. He has a strong reason to want revenge, as Luther was like a father to him. He has complications he has to deal with (such as a cop hot on his tale for a scheme gone bad). And he has to deal with all this while learning the high art of the con from a legend. Redford plays Hooker well in this circumstances, balancing the charismatic side of the grifter with constantly looking over his back for the next guy out to kill him. It's a character that keeps you engaged, especially with Redford in command of the role.

Newman has an easier time as his character that has to play the big grifter. That allows Newman to ham it up a bit more, throw his character's weight around. It's a role he clearly relished as he had plenty of opportunities (that he took) to chew the scenery. A poker game mid way into the film is a perfect example, with Newman playing up his character has a assholish, drunken lout, all to get under the skin of Shaw's Doyle. It's a wonderful performance, done with style and aplomb by Newman.

What helps, of course, is that the caper in question is pretty slick. Putting it in modern terms, I'd call it a "Reverse Ocean's Eleven". Instead of breaking into a casino (or bank, or vault, or whatever), the grifters lure their prey into their own den with the goal of getting the mark to part with his own money (instead of taking it from them). It creates a different vibe from any kind of standard heist film as we're rooting for the grifters to pull off their con but they aren't actually breaking and entering. it's more a game of intelligence than brute skill, which I appreciated.

You can also see how this, more than the original Ocean's 11, was a formative work on the heist genre. While both of these older films feature a group of criminals, each with their own skills, coming together to pull a caper, one puts too much emphasis on the mechanics while the other wisely lets the charismatic leads work through the grift. The focus is on characters, not details, and this film wisely doesn't bog us down in the hows and whats of the caper. It gives it a glossy feel while showing us just what we need to know to enjoy the spectacle. 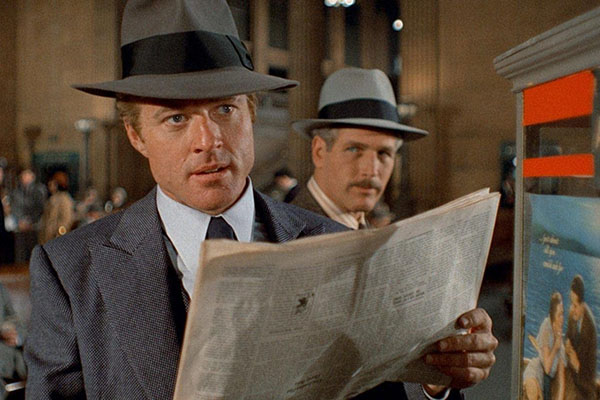 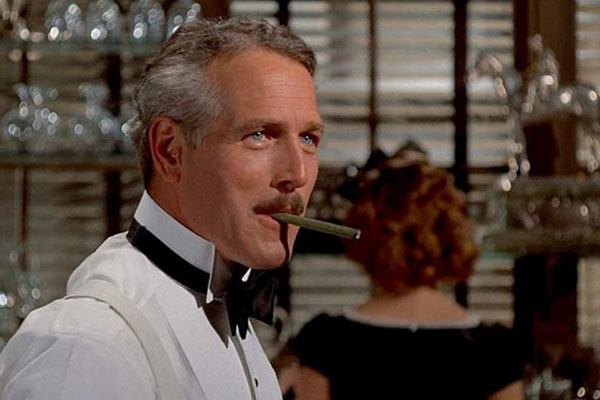 I didn't even mind that this film is over two hours long. Normally I'd worry about a 1970s film with that kind of run time as, for me, those tend to drag. This film, though, has a quick and steady pace. Any time we get too bogged down with this or that scene the film throws in a twist or a double-cross just to keep us on our toes. The film never lets up, always pushing forward, keeping the audience along for the ride. This is the kind of pace a film like this needs, and it's done so well in The Sting.

I get the impulse to skip over movies from long ago. The older the film, the more removed the modern audience member is from the people on screen. And the differences in storytelling, tone, and pace, can make older movies harder to watch for modern audiences. In this case, though, The Sting rises above those concerns. This is a solid caper film with a solid pace and a great cast. Anyone that loves films within the heist genre absolutely owes it to themselves to watch this film. It's worth it.