Taking the Long Road Though Life

Although he gets a lot of shit, Vin Diesel isn't a bad actor. Yes, he has been condemned to be the spokesperson for a couple of specific franchises, The Fast and the FuriousStarted as a film about undercover policing in the illegal street-racing community, this series has grown to encompass a number of different genres and become one of the most bankable franchises in the world. and xXx specifically, while some of his other big, successful movies don't really show off his abilities (the assumption that saying "I am Groot" over and over again doesn't take much talent). At the same time, though, he is an iconic face and one of the few bankable A-listers in Hollywood right now. You don't lead a franchise like Fast and Furious $6.6 Bil worldwide without some bankability to your name. 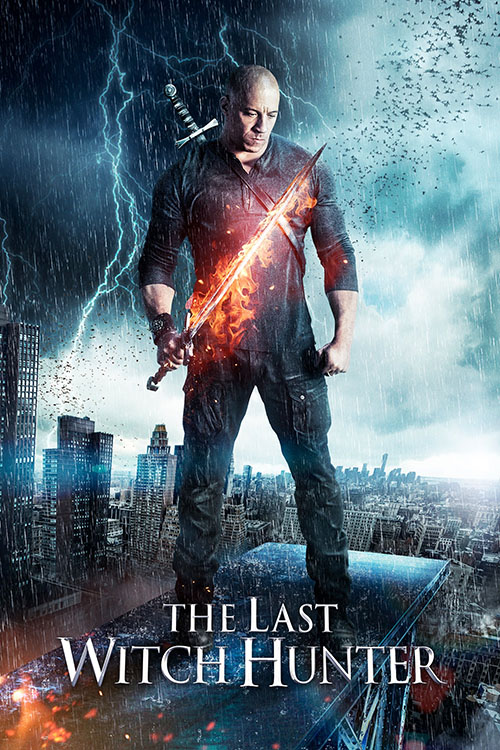 With that said, some of his best performances have come in films that flew under the radar, at least in comparison to Mr. Diesel's biggest hits. I'm a big fan of the Riddick films, for example, but those have never had the Box Office power of Diesel driving tough in cars even though I think his turn as Riddick the space bad-ass is way more interesting than anything he's done as Dominick Toretto. You can tell when Diesel really cares about a character, and a world, and despite him clearly enjoying himself when playing Toretto in the Furious films, that doesn't hold a candle to what e turns in when he truly seems invested in a role.

No one is going to accuse 2015's The Last Witch Hunter of being high art. It's a middling fantasy story with delusions of being a franchise starter. It feels like if you turned James BondThe world's most famous secret agent, James Bond has starred not only in dozens of books but also one of the most famous, and certainly the longest running, film franchises of all time. into a witch-hunting warrior, just with a convoluted back story attached as well. It works, but it's hard to say that it works well. Still, what's clear when watching the film is that Vin Diesel, who plays the lead in the movie, cares a lot about this film and its central character, Kaulder. This is his character and he wanted the witch hunter's film to success.

The reason he cares so much is because Kaulder, in some form, was basically created by Diesel. Screenwriter Cory Goodman was heavily innfluences by stories Diesel told of his Dungeons and Dragons character, a hunter who went around battling fantasy foes, and basically built a movie around that hero. Diesel is, essentially, playing one long Live-Action Role Play (LARP) by bringing Kaulder to the big screen. Few nerds get to see that happen and, if they can make $150 Mil for a studio (against a $90 Mil budget) in the process, then I say "more power to you, good sir." At least everyone here was having fun while they influenced

The film starts off by introducing Kaulder (Diesel) back 800 years ago. He, and his band of warriors, quest to the world tree that acts as the home of the Witch Queen (Julie Engelbrecht) and her coven. Witches in this world aren't exactly human and the Witch Queens feels like the world should be dominated by witches, not men. She creates a plague, the Black Death, to wipe away humanity, and only by battling the coven, and killing the Witch Queen, can they stop the plague and save humanity. As the Queen dies by Kaulder's hands, though, she curses him with immortality, condemning him to wander the Earth forever. 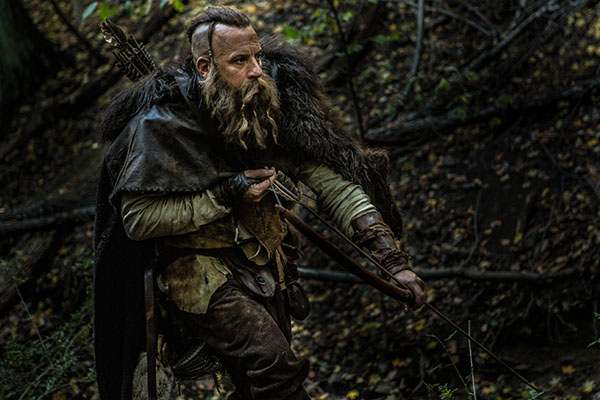 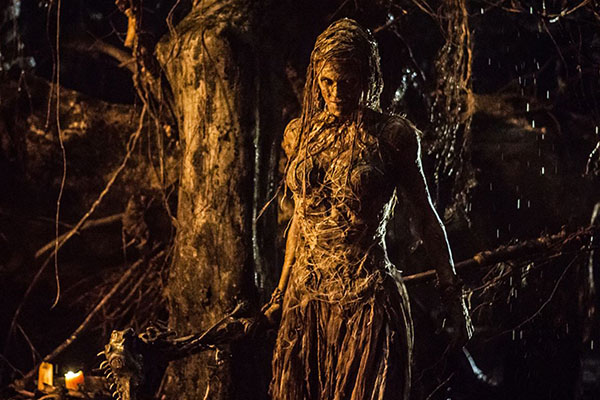 Now, in the present day, Kaulder is watching his life transition as his overseer, the 36th Dolan (Michael Caine), retires. This will usher in a 37th Dolan (Elijah Wood) to aid Kaulder in his continuing fight against witches that break the "rules" of the Church. However, dark forces gather to once again test Kaulder and potentially end the world. A new coven has risen with the express intent of resurrecting the Witch Queen. It's only with the help of the 37th Dolan, and a powerful witch that Kaulder is protecting, Chloe (Rose Leslie), that our hero will have any chance of stopping a new plague from wiping away all of humanity.

I don't want to say that the plot for The Last Witch Hunter is too complex but it does certainly dump a lot on you all at once. Witches, Dolans, a secret organization that oversees Kaulder and imprisons bad witches, and so much more. The film drops all this out early and then charges ahead, assuming you'll remember all the names and subjects raised. It can feel a like a lot for what is, in effect, a big, dumb, effects driven fantasy film. I think the film does a disservice to itself forcing viewers to learn so much, so quickly, about Kaulder's world.

In a way, it might have been better to focus one film on Kaulder in the past, dealing with the Witch Queen the first time. Then we could learn about him, his wife (played by Lotte Verbeek) and daughter, before having them snatches away at the hands of evil witches. A big fight for the fate of humanity, the curse that condemns Kaulder to immortality, and then a end-sequence of Kaulder in the present to set up further adventures might have worked better. At least then it would ease us into everything important about the character so we could get a feel for why the witches are bad and why the Witch Queen had to be stopped without, first, getting both a history lesson and a politics syllabus at the start of the film.

Of course, while that would have worked better from a storytelling standpoint that past-set film likely would have been more expensive to film. Instead we get a modern-set film that lets Diesel be Diesel as he gruffly works his way through this case. It's fine, and it works as well as it does because Diesel clearly enjoys this character a lot, but there was a missed opportunity to really lets this story breathe properly across two films instead of one. The film feels very dense, in a rush to get through everything without taking the time to really develop anything. 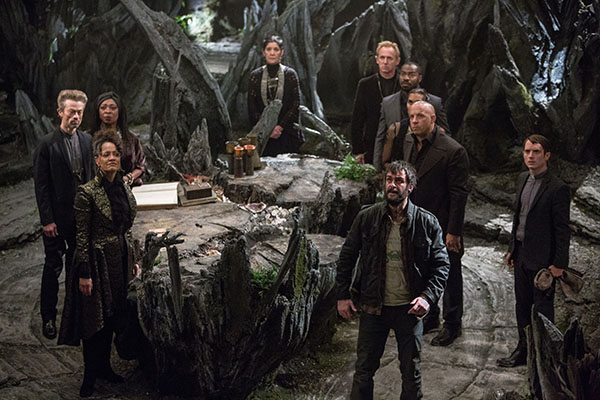 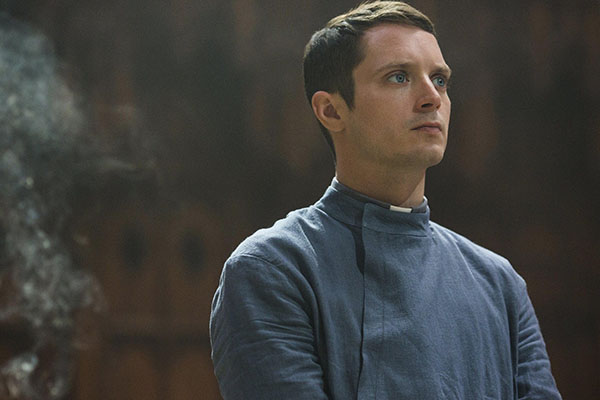 This is felt most by the co-starring characters of the film. Although I like Leslie and Wood do well enough with their underwritten characters, neither of them get the development needed to really work in the context of the film. Leslie is a charismatic actress and she can hold her own against Diesel, but her helpful witch is really there just to look pretty and, occasionally, act as a deus ex machina for the plot. Her agency is lacking. And poor Wood is tossed into a nothing character who gets a heel turn part way in that feels so slight it wasn't even needed.

The only side character that really sing's is Michael Caine's 36th Dolan and that's largely because you can't stop Michael Caine from dominating the screen. The actor has a way of making every role feel meaty even when he's only in a handful of scenes. His friendship with Kaulder is well developed, and Caine adds needed warmth and depth to the role to make the character feel absolutely essential to the proceedings. This is Diesel's vehicle, but its Caine that absolutely steals the show.

Frankly, I really wanted more development of the witches. Their world seems interesting, and the few glimpses we get make it seems like an even more ethereal and magical version of the underworld from Constantine. With a story that really let this setting breathe, and developed the magic more, we could have had a stunning fantasy adventure here. But either due to a shallow script or a low budget, the film couldn't give us the world we needed.