Time to Ride the Ride Again

There's a simple pleasure to be had in a good sim building game. There are plenty of bad sim games out there, boring titles that barely manage to convey any kind of realism, let alone fun. But a good sim game gives players an experience. You get to feel like a god, in a way, commanding around all your little people as you craft their entire world. When a sim game hits all the right elements it can be an absorbing experience. Anyone that has spent hours crafting a city in any of the SimCity games know exactly how that goes. 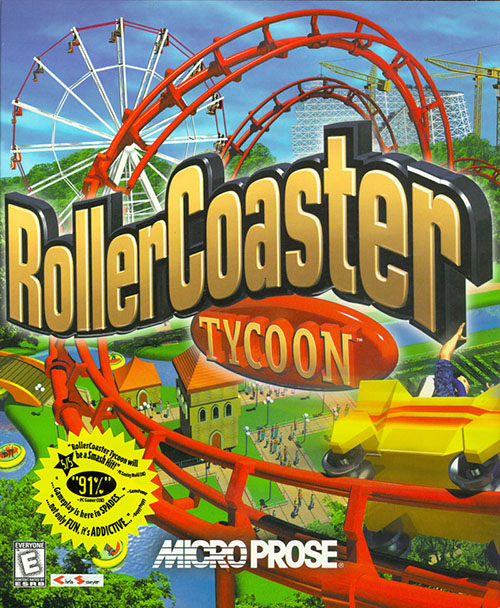 When it comes to sim games, though, none have ever captured my fancy quite the way RollerCoaster Tycoon managed. It wasn't a game I was even aware of when it first came out. I didn't know it existed until a friend picked it up and showed it to me. But once the game launched, and we started exploring all the things you could do in the scenarios while building your perfect theme park, well then, I was hooked. No other sim style title has managed to get its hooks in my quite the way RCT has.

In RollerCoaster Tycoon you are, well, a tycoon, brought in to work your magic in making any of the various parks in the game successful theme park experiences. You do this by controlling every aspect of the theme park experience: you build rides, decorations, paths, stalls, and everything else a park will need. You'll hire employees and assign them to where they need to work. You'll control all pricing in the stalls, the rides, and the park itself. If there's anything you think you can do with a theme park (short of riding the rides) you can do it in the original RCT.

The games starts simply enough, dropping you into a one year scenario where you have to get enough guests, and a good park rating, within that year. From there, though, things ramp up. Larger parks, more varied terrain, and more goals that have to be met. While I wouldn't say the game ever gets truly difficult, it does present some challenges in the later scenarios that, over time, you will have to really think your way through. It can be quite the experience.

The best part of making your parks, though, is certainly building the rides. While the basic, flat rides come prebuilt (with few options), the roller coasters (and some other rides) an be built from scratch. Oh, sure, you could just go with one of the prebuilt coasters (and when you're first starting out that's probably the right call), but once you get into building your own rides, and seeing what all is possible, it becomes a real joy to add your personal touch to every coaster in the park. 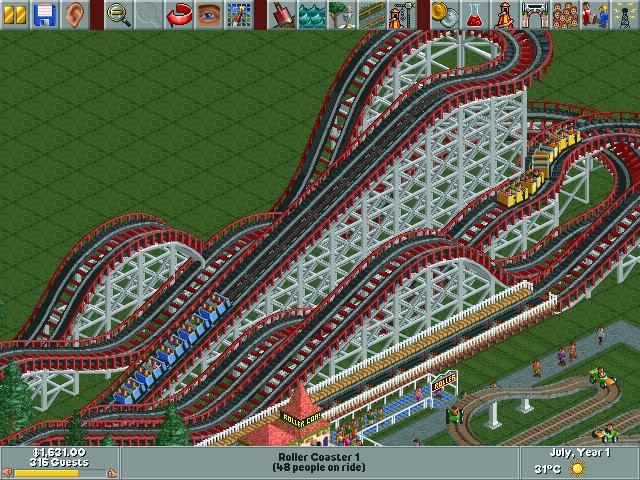 Bear in mind there is a certain art to building a good coaster. If you make it too fast, the turns too harsh, the hills too steep, you could make a coaster that too extreme, too intense, or simply not fun. People don't want to ride an extreme ride (and those that do will likely vomit all over themselves once they jump off). Mastering the art of a good coaster is certainly a requirement for getting the most out of your RCT experience. But if you're able to do it then you'll see the real joy of the game.

Honestly, one of my favorite rides is one of the most basic: the shuttle loop. It's a simple powered-launch ride that shoots the train up a hill, into a loop, and then up another hill before letting the train roll all the way back on its own reverse momentum. The coaster is small, and cheap and does gangbusters for your bottom line. Even better, if you build a reverse version right next to it you can link the two to run at the same time, making both rides even more exciting. So naturally I always have both versions (with some improvements of a shuttle loop provided in the base game) saved for use in every park I run.

Of course, you can always get really crazy and design all kinds of monstrosities. They may be expensive, and take up a ton of room, and really not be cost effective at all, but when you see the trains barreling around your park, watch the people come out of the ride exit and jump for joy before running right over to the entrance to ride it again (sometimes barfing in the process) you know you did your job right.

There's magic to RollerCoaster Tycoon. It's a game with simple pleasures but a lot of depth to it, an impressive feat considering it was largely created by one guy way back in the day. It's a game that once you've played it, and it clicks for you, you know exactly why you want to keep playing it. I've gone through the game four times so far, coming back to it every few years to play through it all once again, and I always have a blast. It's just a fun and infectious game. 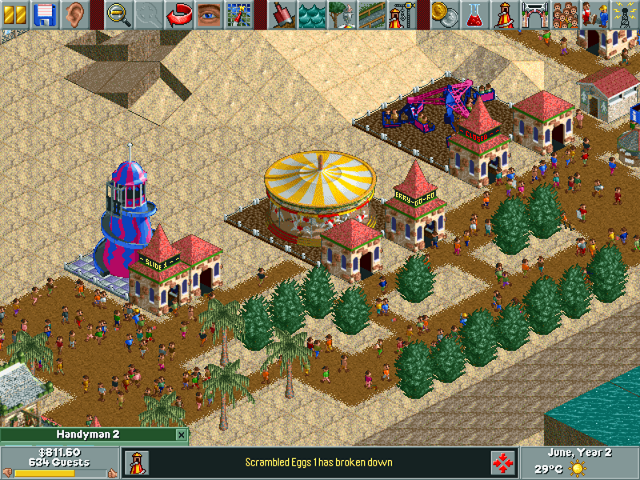 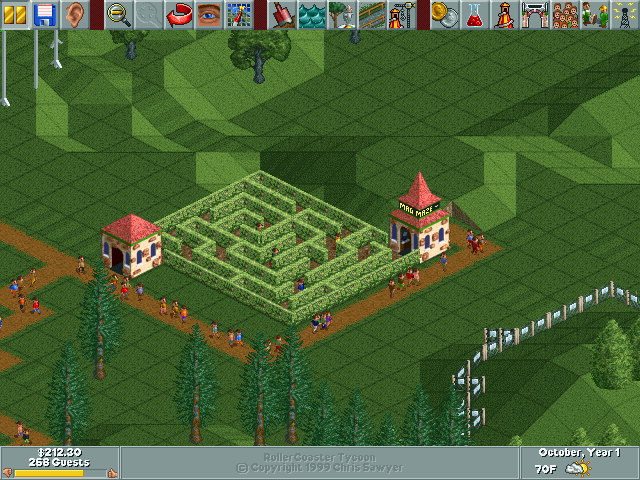 And then I play a four year scenario, and realize I've been at my computer for four hours and I haven't gotten up in that whole time. I need to use the bathroom, grab a drink, maybe see civilization again. But there's another park to run, more rides to design, and a while span of park ideas I want to explore. Just one more park and then I'll go be a real person. Just one more...