I am not here to defend Stephenie Meyer. The author has gotten a lot of crap over the years due to writing Twilight and all those books. That alone got a lot of crap dumped on her from the Internet because there's nothing nerds love more than shitting on something they don't like (I do it all the time on this site). She's also very religious (as if you couldn't tell that from the themes in her books, or at least the themes in the movies based on her books as I'm not going to bother reading her books) and that, too, gets a lot of flack thrown her way. She doesn't seem to be as wretched of a person as, say, JK Rowling, but I neither know nor care enough about her to really deep dive into everything Stephenie Meyer. 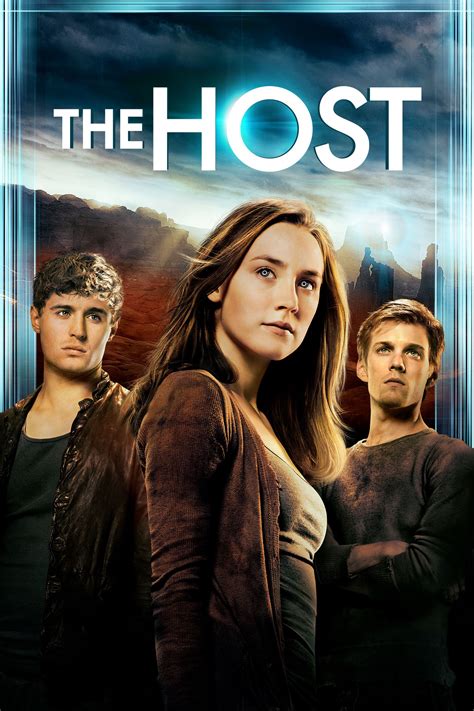 What I will say is that (possibly despite the quality of her novel) the 2013 film The Host wasn't nearly as bad as I was expecting. It's not great, with a start that really drags and an ending that both feels too preachy and too pat. But there's a decent film somewhere in the middle act that nearly elevates the whole production. Considering I suffered through the Twilight films (of which one of the five wasn't entirely awful) I'd say this other theatrical effort actually managed to clear whatever low bar my expectations has set. I still wouldn't recommend the film but you could do a lot worse.

In the movie we're told, via opening narration (a cardinal storytelling sin I wish people would stop relying upon) that the Earth has settled into a newfound age of peace and prosperity. It's not because humans managed to get their shit together and actually come together in a Utopia; quite the opposite, in fact. An alien invasion took place and those aliens, peace loving creatures that protect life, took over the bodies of the humans, and then the world. It was the quietest, nicest invasion ever and, in the end, there were only a few real humans left.

Those few humans, though, have been fighting back as best as they can. The film opens with one of those resistance fighters, Melanie Stryder (Saoirse Ronan), on the run from the pursuing body-snatched aliens. In the end, Mel chooses death over getting captured, throwing herself out a window. She survives, barely, though and the aliens heal her and then put an alien inside her: the Wanderer. The Wanderer is ancient, having been on dozens of the worlds the aliens took over. This time however, the Wanderer finds herself in an unwilling host. What the Wanderer finds, as Melanie screams within her own mind, is that humans are tougher than the other races the aliens bonded with and, this time, there might be a real fight on their hands. But the Wanderer also strikes a friendship with Mel and, over time, the two begin to work together to help the humans and maybe find some kind of true, lasting peace for the Earth.

In her Twilight series Meyer played around with classic horror monsters, vampires and werewolves, to create a YA romance series. That set of novels became massively successful, largely on the backs of unrequited love and (once the films were made) pretty men going around being pretty. For The Host, Meyer digs in a similar well, swapping classic horror monsters for body-snatching aliens, but her results are similar: YA romance among the monsters. 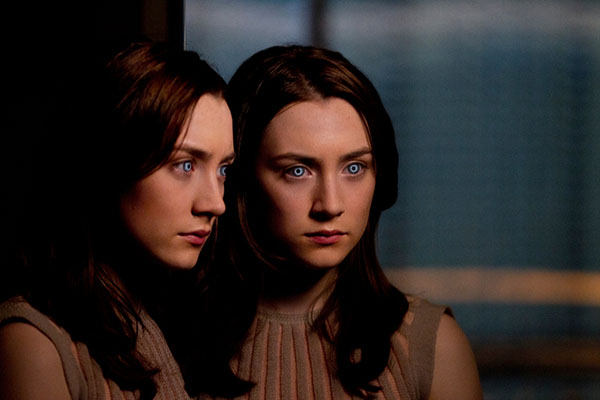 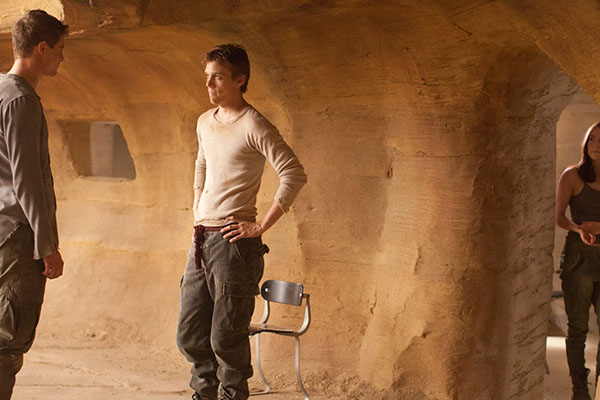 As far as love triangles go, The Host has an interesting hook: Melanie loves Jared (Max Irons), her boyfriend back at the last human compound. Meanwhile, another guy there, Ian (Jake Abel), has his eyes opened by the Wanderer (now going by "Wanda") and finds himself falling for that version of the girl. The two halves of the shared woman each want their own guy, leading to quite a split among the personalities. Yes, it's all in service of the same kind of love triangle Meyer wrote before (oh, can Bella love both the broody, creepy vampire and the werewolf that is chronically unable to keep on a shirt?) but at least there's a slightly different hook to make it feel like different romance.

What doesn't work for me, and I think this comes in part at least from the way the film interprets having Mel inside Wanda's head, is the way the conversations between the two girls play out. Maybe it's Ronan's delivery as brain-Mel, a tad too over-earnestness in her voice over delivery, but I found Mel, as she's depicted, to be pretty cringey. The voice interrupts and sounds needlessly needy and naggy. I feel like had she been externalized somehow, with Mel being a specter Wanda saw and could chat with that might have worked better. Maybe.

Of course, as my wife pointed out when we watched this film, that's not how it played out in the book; the movie nails the book's depiction of their back and forth, going for the literal translation. That's fair I guess, but it doesn't work. Sure, doing a specter hanging out on the side would not only have been a different visualization but it would have required additional filming and effects budget for this cheaply made YA film, and voice over is much cheaper. You can see why they do it I just don't think it quite works.

With all of that being said, there are bigger issues with this film. The first is that the entire first act is really slow. It drags for a long time before Wanderer and Mel team up to escape the alien compound and go in search of Mel's people. Once they get to the humans the film picks up and finds some real energy. That actually helps carry the film for most of the film, right up until the ending... and it's in the ending that things fall apart. At this point then the film gets really preachy, going on about the "sanctity of life" and "saving a soul" and such. You feel like the scrip, via Meyer's own words, is preaching to you. Whether intended or not, it makes the film feel like an anti-abortion screed. 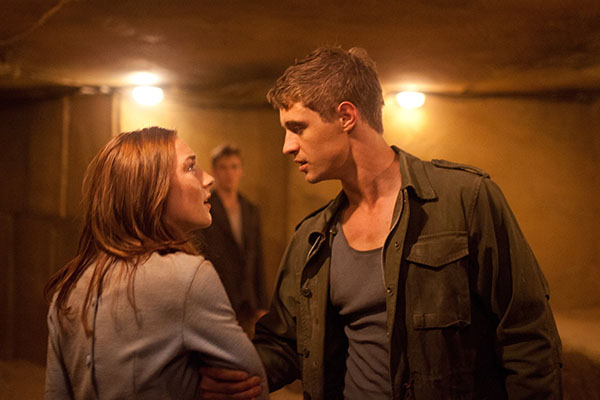 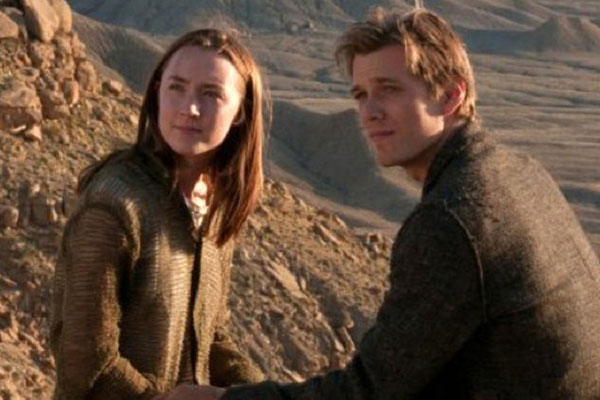 Oh, and it buys in for a super-happy ending that simply isn't earned. The characters, and the plot, have to twist themselves up in a way to make both Mel and Wanda happy and while I won't spoil it here it's a little too easy, a little too dumb, to really work. It throws all kinds of questions out about why the aliens are doing what they do and if they couldn't find a better way to handle this whole invasion thing. The ending, in effect, ruins the whole movie that came before.

But then, we also have to look at how the aliens function. They're little space bugs that enter human bodies via cuts along the human's spine. How, exactly, did they manage to infect and take over the first human? That seems like it would require a massive set of coincidences for a human to have just the right wound for the alien to take over. Can they enter someone through their anus or does it have to be their spine? Are other openings okay? The film elides right past that without doing the necessary world-building to answer basic questions.

And even beyond that, the goal of the aliens is to preserve life and save souls (ugh, again). They come to the humans, though, and get resistance every step of the way. The humans would rather die than be taken over. One has to think the aliens would sit back and go, "bruh, maybe this isn't the right planet to symbolically colonize." Certainly things seem to run better under alien control so it's not all bad, but man, the aliens really failed their mark in this instance, and that again speaks to bad world building.

The Host isn't great. Frankly I think it might even qualify as bad, but it's a bad that is quite watchable in places. You have to not think to hard on it, just letting the charms of the middle act carry you through. If you can do that you'll find a bearable affair, but maybe not one you'd want to go back and watch again.