Gimmie Them Steroi- I Mean, Orbs...

There are a lot of games in the beat-em-up genre. Good titles, like the Streets of Rage and Final Fight games, along with (of course) the classic Konami Teenage Mutant Ninja TurtlesOriginally dreamed up as a parody of Marvel's Daredevil comics (going so far as to basically reproduce to opening shots of that comic's hero gaining his powers), the Teenage Mutant Ninja Turtles not only launched a sudden boom of anthropomorphic fighting animal comics but have, themselves, starred in multiple comics series, TV shows, and movies.. These games hold the test of time not only for their great graphics and sound but also sterling game play. These are games that, even know, fans go back to again and again for that sweet bit of on-the-street fighting action. There's nothing like them. 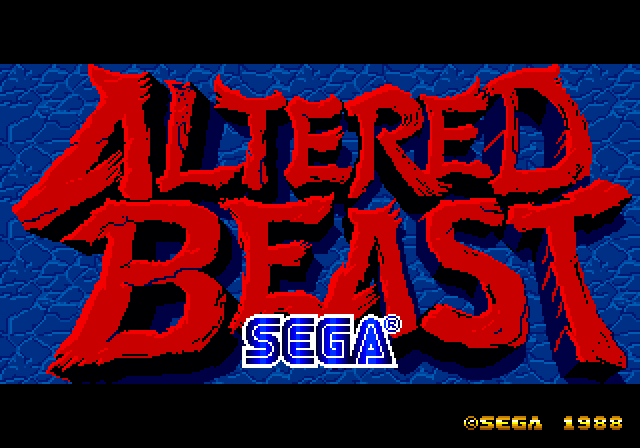 But there are other games in the genre, games that live on for a number of reasons. Some might be great, others might be silly, and some as just so weird and strange that fans remember than even after much better titles have come along. Nothing quite exemplifies that better than Altered Beast, a truly goofy beat-em-up from Sega's early 16-bit days. I wouldn't say this game is at all good, in any way, but it is a fun and dorky beat-em-up all the same.

In the game, the evil lord of the underworld Neff kidnaps Athena and drags her down below. Angered by this action Zeus, God of the Heavens, summons a hero to save the day. He raises a dead centurion and imbues him with power. It's up to the centurion to battle through the many levels of the underworld, fighting Neff over and over, until he reaches the end and is able to free Athena so she can fly back up to the heavens. Do this and you truly prove yourself to be an... uh... altered beast.

From the start, Altered Beast proves itself to be something just a little different from your standard beat-em-up fare. The game had decent for its time graphics, and pretty good sound (with solid voice clips), but it's in the mechanics that the game really showed its true colors. True, when your hero first starts out he's just a goofy little dweeb. As you go along, though, and collect orbs of power, the guy beefs up. He gets bulkier and bulkier (making more than one kid back in the day joke about "steroids"), all before transforming into one of the altered beasts. Then you get to run around like a beast-man, kicking ass and taking names.

The animal transformations are the stars of the show, through and through. While muscle bound dude beating the shit out of guys was a tried and true staple at that point -- for example, Bad Dudes, when you had to prove yourself to be a bad enough dude -- none of those games let you transform your steroid-addicted warrior into animal-men. It was gloriously stupid but also, for an early 16-bit game, pretty damn glorious. Seriously, getting those over0powered animal forms and wrecking face in the game felt so good. 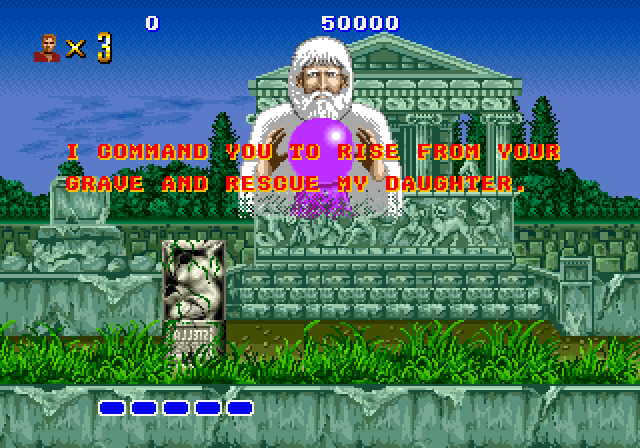 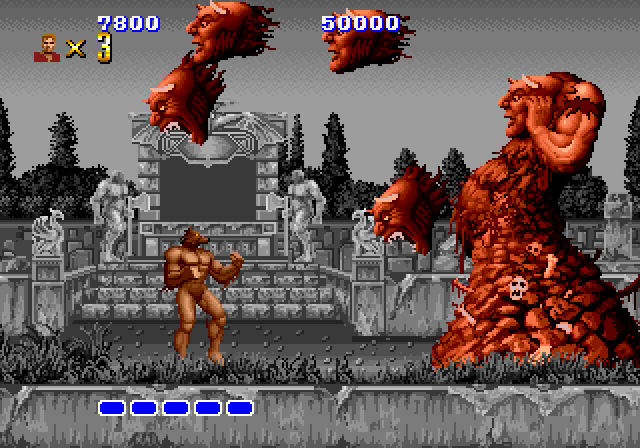 The game was fun back in the day, but even then players had to admit it was pretty easy. The game was short, by any measure, lasting only five stages in the Arcade and Genesis versions (with an extra two packed into the cruddy NES port), and the game could be cleared in ten minutes or so with only minimal practice. Hell, I'm bad at video games and I can clear this game on a single credit, easily. In comparison to other beat-em-ups on consoles and in arcades at the time, Altered Beast was stupid easy.

It also wasn't all that deep. Each stage essentially amounted to the same thing: take your dweeb, find three orbs to bulk him up to beefcake, golden god, and then altered beast, and then take on a boss. If somehow you didn't have all the steroids in you by the time you got to the boss you had to play a part of the stage again until you were roided up properly. Kill the boss, lose your power, and then do it all over again in the next stage. The only difference between stages, really, were the animals you got to play as, which varied considerably in their cool factor.

The base game had five transformations: werewolf, dragon, bear, tiger, and golden werewolf. Of the five, three -- wold, tiger, and gold wolf -- essentially played the same with dash attacks and projectiles they could throw. These are the most fun, but due to all three being very similar they also lacked variety. The bear was the next best, having a stoning breath along with a spinning jump attack. He's fun, but limited in his own way. Finally, the dragon feels just silly. He can fly around, which is cool, but instead of an kind of projectile he gets limited to a shocking aura attack. It's dumb, and really not fun to play.

Now, in fairness, if you did get the NES game you got more transformations you could play, with a shark, lion, and phoenix added into the mix (likely because Nintendo in that era demanded new features be added to any ports on their console). Sadly, to access these forms you had to play the NES game which was both less interesting, not as pretty, and much harder. It's the worse version of the game (although not the worse and ports for DOS, the Amistrad, Atari ST, and more certainly were even worse to play). 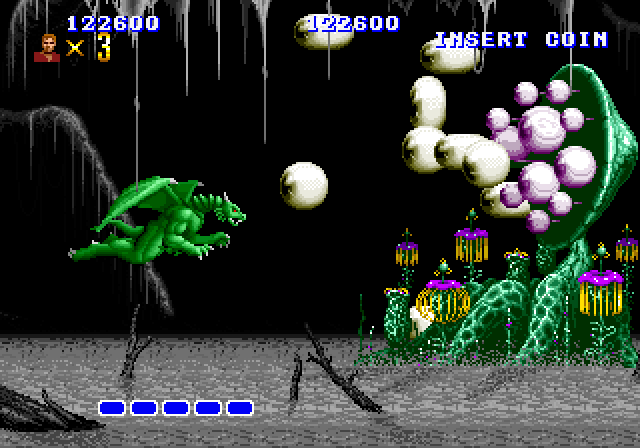 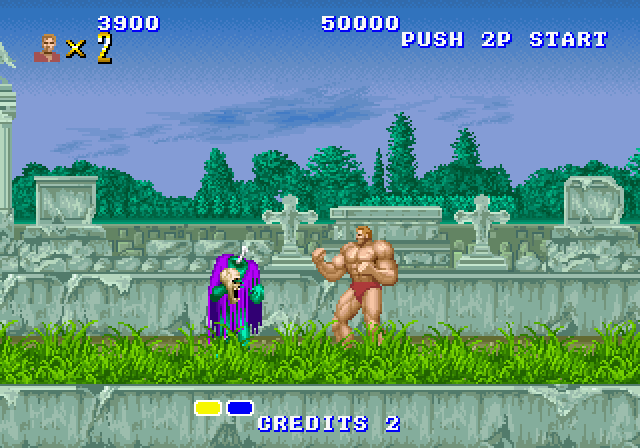 Going back to this game after 30-plus years, it's really the age that brings it down. This game felt great back in the day, fun and silly but certainly memorable. Now, though, it's hard to look at this as a good game. Taking out the steroided beefcakes is great fun for a time, but the simplicity of the game, and its forgiving difficulty, make it hardly worth the effort to play. You'll have fun for a few minutes, and then suddenly get to the end, only to put it down because, hell, you already saw all you needed to. Altered Beast, at this point, works better as a meme than as a game but, man, what a funny meme it is.