My Whole Future Before Me

Rian Johnson gets a fair bit of hate, mostly from the very vocal (and very angry) Star WarsThe modern blockbuster: it's a concept so commonplace now we don't even think about the fact that before the end of the 1970s, this kind of movie -- huge spectacles, big action, massive budgets -- wasn't really made. That all changed, though, with Star Wars, a series of films that were big on spectacle (and even bigger on profits). A hero's journey set against a sci-fi backdrop, nothing like this series had ever really been done before, and then Hollywood was never the same. fans. Somehow, with Episode VIII: The Last Jedi, Johnson managed to ruin their collective childhoods and this is a sin that will never be forgiven. Let's not dwell to much on their spoiled baby attitude because, frankly, those people are stupid, but instead actually acknowledge what Johnson did that pissed them off: he made a film that feels like a rejection of the Star Wars that directly came before. He looked at the true classic films and made a film that played with the elements of that universe without being beholden to them. It didn't coddle fans but made them think and work for it. Star Wars is, at this point, apparently comfort food and the hardest of hard code fans hated the vision Johnson had. Again, they're idiots. 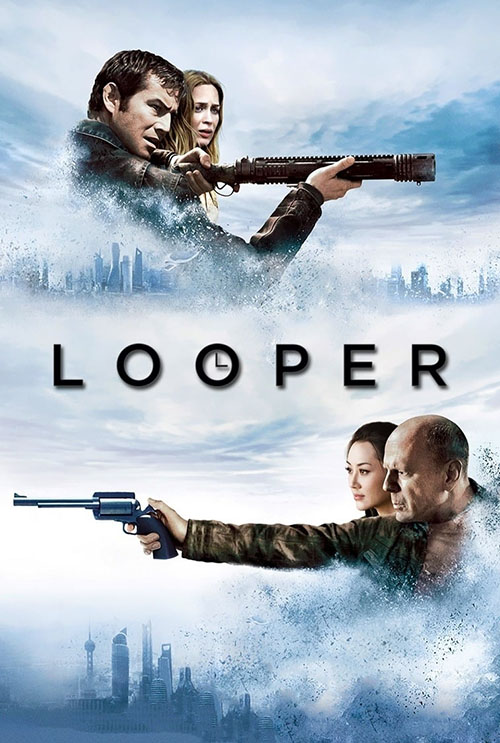 What surprises me most is that, when you look back at Johnson's whole filmography, making something that takes elements of other works and toys with them creating something that seems familiar but defies tropes, that's exactly what Johnson always does. You can see this back with Brick, a film that played with all the tropes of Film Noir and yet used the setting of a high school for its tale. It felt all so familiar for those of us that have watched the dark and dangerous movies of the 1940s and 1950s, and yet that twist revealed layers to the film and took things in another direction entirely.

Another solid example is Johnson's post Star Wars film, Knives Out. That movie plays like an Agatha Christie story, with all the twists and turns you'd expect. But by casting Chris Evans in a lead role (and, spoiler, as the eventually revealed murderer) the film was also able to play against type, getting in some great revelations that really worked against audience expectations. You get the feeling that Johnson really likes to play against expectations; he's not beholden to "the twist" the way, say, M. Night is, but he does like defying audiences as he looks for a rug pull.

For sci-fi fans an inkling that Johnson's Star Wars work came five years earlier with his time travel flick Looper. That movie presents itself, on its face, as a simple crime movie with a basic sci-fi twist, but as the movie plays out more and more details about the story, and the characters, change your perspective on the events as they unfold. Eventually you have to accept a new reality within the story, giving you that new perspective that Johnson seems to like to force on his audiences. It works so well because the transition feels organic, but the impact is no less of a gut punch than Johnson likes to achieve.<

In Looper we're introduced to Joe (Joseph Gordon-Levitt), a guy working as a "looper" for the Kansas City Crime Syndicate. Loopers are basically hired guns. They'll go out to a predetermined remote area and wait for a specific time. When that time comes, a person will wink into existence from the future, and the looper with shoot them (with their handy, dandy blunderbuss). The body will have a bunch of silver bars taped to it, and that's the looper's payment. They can then go about their lives, drinking and screwing and spending their ill-gotten silver. However, when a looper's contract is up, the body that comes in will have gold strapped to them. That body was their future self and they just "closed the loop" on their own lives. 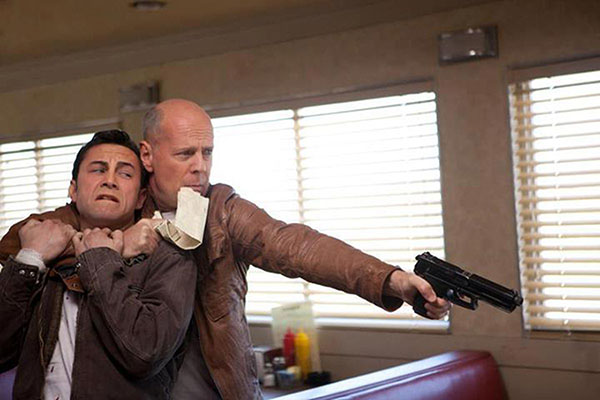 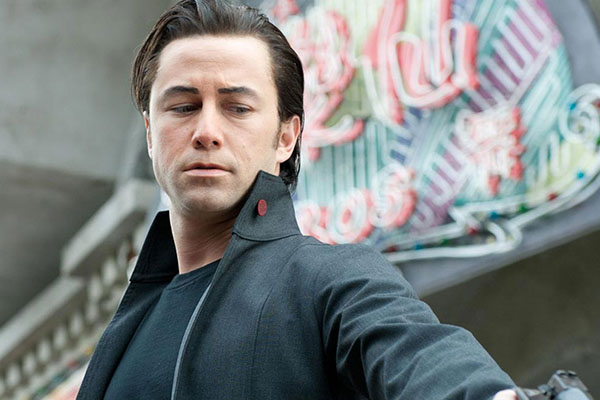 Unfortunately for Joe, things don't go quite right in the future and when his future self, Old Joe (Bruce Willis) shows up, he's ready for a fight. Old Joe gets the better of Joe and runs off, gold in hand, so he can make changes and prevent his own death. It seems that, back in the future, Old Joe fell in love and got married and he wants to preserve that future. The only way he can see to do it is to kill the guy that runs the crime syndicates in the future, some powerful TK freak (TK as in telekinetic) who wants all the loopers to die. Old Joe plans to kill the crime boss when he was just a kid, but Joe, having a conscience (and not having seen his own future yet) can't just let a kid die. This pits Joe against Old Joe, as well as against the whole crime syndicate for failing to kill his future self.

My brief rundown of the story really condenses a lot and leaves a fair bit of the nuance behind. Suffice it to say, though, that for a nearly two-hour film this movie gets all its story out in an economical pace without doing too much of an info dump (or leaving too many details on the cutting room floor). It's a solid bit of crime fiction mixed with time travel shenanigans, and it works really well. Yes, sure, like with all time travel movies it has some moments where you have to turn your brain off because of potential paradoxes (which the movie quite explicitly hand-waves away with a "let's just not discuss it" moment), but the film uses the time travel to tell its economical story, and that's why its conceit works so well.

Helping to power the movie are its leads. Gordon-Levitt has the harder task here, having to not only play an anti-hero character forced to do heroic things, but he's also tasked with basically playing Bruce Willis. The film does him no favors, giving him a nose prosthetic that makes him look "more" like Bruce (at least, that's how it's intended), but it's so glaringly obvious it feels counter to what was needed. Still, Gordon-Levitt's Joe is a solid emulation of Willis's own performance, still given nuance and depth by the strength of the younger actor's skill.

By casting Willis as, effectively, the villain, Johnson also gets to defy audience expectations as he likes. Willis generally plays heroes, is known for his roles most famously in the Die HardThe 1980s were famous for the bombastic action films released during the decade. Featuring big burly men fighting other big burly men, often with more guns, bombs, and explosions than appear in Michael Bay's wildest dreams, the action films of the decade were heavy on spectacle, short on realism. And then came a little film called Die Hard that flipped the entire action genre on its head. movies, and when he shows up you expect him to know what he's doing, to be the big damn hero. For him to, instead, want to kill a kid all for selfish reasons, it's an against-type casting that really works well. Willis's Old Joe doesn't get as much screen time as Joe, but he makes the most of his own conflict, and the things he has to do, to get his own job done. 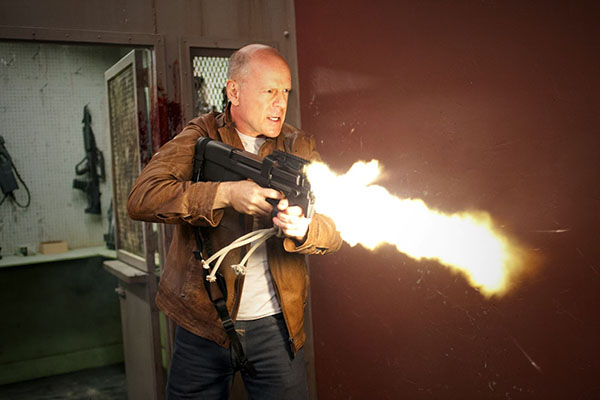 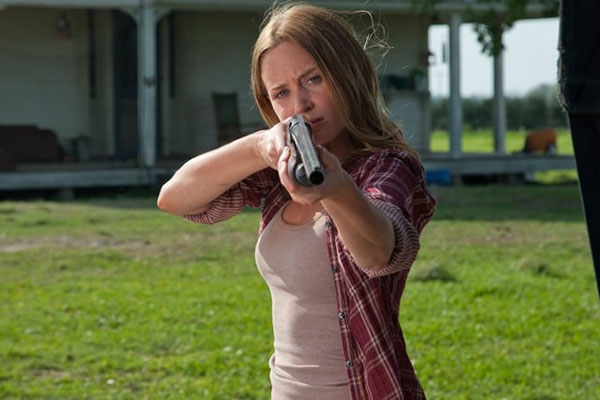 And then there's Emily Blunt, a co-star in the film he comes to dominate the later acts. How she ties into the movie is best left as a mystery for anyone that hasn't seen the movie before, but suffice it to say that Blunt makes the most of her character despite not being in the movie for the whole first act. Naturally that's because Blunt is an amazing actress that can sell the shit out of anything, but having an actress this great in this role gives her character substance when she could easily have been a throw away second-stringer otherwise. That's why the story (that I won't spoil) works so well because you're as invested in Blunt's Sara as you are Gordon-Levitt's Joe.

Although the trailers for the film sold it as more of an action experience -- you have Willis in the movie, that must make in all about the action! -- but it's really more of a drama with a couple of flashy moments. That about summarizes the same things Rian did in Star Wars. I really enjoyed Looper for what it was, a contemplative, twisty time travel drama. I knew what to expect from the direct when I went into Episode VIII. Maybe Star Wars fans should just have reasonable expectations.

Hahaha, who are we kidding!?