Does anyone really like John Grisham's stories? There was a time there where his books were huge sellers, big stories that then led to big Hollywood movies that, themselves, did decent business. But after a few years of that the luster seems to have come off. You don't really hear much about Grisham novels, not like you used to, and Hollywood seems to have tired of the author and his work. Hell, the last movie based on one of his novels was Christmas with the Kranks which didn't exactly set the world on fire when it was released back in 2004. 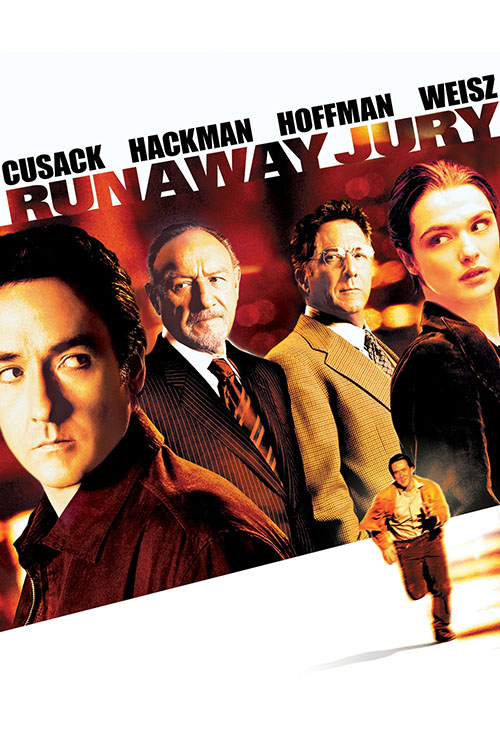 If you go back and look as the movies based on his novels, he had one really big smash hit, The Firm (which was really because of the star-power of Tom Cruise), followed by two more moderate hits -- The Pelican Brief and The Client -- and then a lot of films that barely managed to break even (or worse). Audiences didn't seem to care so much about the Grisham name as they did the starts that were in the films and how splashy the productions looked. Once you've seen a few Grisham films, (nearly) all of them set in courtrooms while people talk about the glory of the law, you've kinda seen them all.

That said, some of this films do have their charms. I actually rather like The Rainmaker, a film powered mostly by a solid performance from a young Matt Damon. That said, some adaptations of his works really don't work, they're tedious and overwrought, leading to a film that just seems laughable. That leads us to Runaway Jury, a film with a decent concept -- what if you could purposefully swing the votes of a jury to hurt a shady business -- that gets muddled by a sloppy production and awful script. I can respect the idea behind Runaway Jury but the way it's put together leads to a big failure on all fronts.

In the film we first meet Nicholas Easter (John Cusack). A game store worker by day, Nick finds himself summoned for jury duty, a task he doesn't seem to want, which he tells his friends. (Friends, I should note, we never see again so why were they even introduced?) He goes to court and tries to get out of being on the jury but, instead, only manages to become one of the seated jurors, forced to sit through a case brought by a young widow against a gun company, Vicksburg Firearms, after her husband (at the very start of the film) is gunned down in a mass shooting where the crazed gunman used one of Vicksburg semi-auto machine pistols.

As we learn, though, Nick really doesn't want to get out of being a juror, that was just a plot. Secretly he's working with Marlee (Rachel Weisz), who from the outside helps Nick dig up dirt and work to sway the jury on the case. They're battling against the jury consultant for the defense, Rankin Fitch (Gene Hackman), and his huge team of P.I.s and techs all paid for by the gun company. They're the bad guys, in contrast to the attorney for the plaintiff, Wendell Rohr (Dustin Hoffman), and his own jury consultant, Lawrence Greene (Jeremy Piven), who just want the window get her justice. 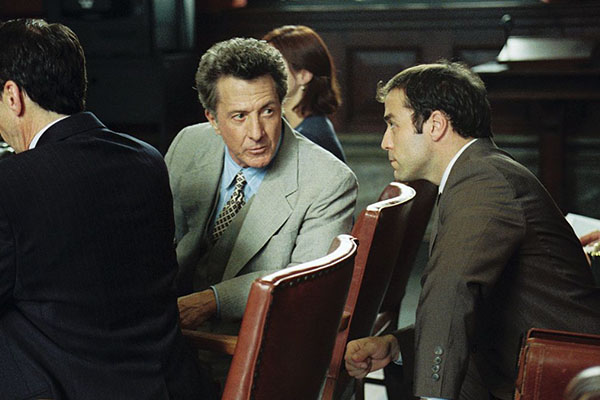 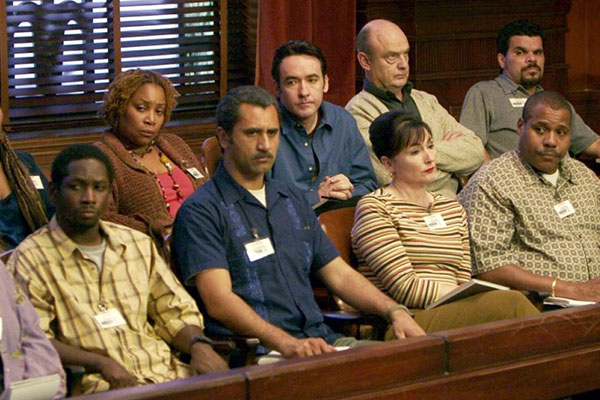 For anyone that has read the original novel, The Runaway Jury, you might have already picked up on one very major change the story went through when it hit the big screen: guns. That novel was about a woman suing a cigarette company because her husband had died of lung cancer. I suppose the change was made in large part because by 2003 opinion had turned enough on cigarettes (and enough cases had gone against the cigarette companies) that making the trial all about smoking didn't make sense anymore. Changing the case to guns was actually fairly prescient as, just a year later, all the Regan-era gun control laws were allowed to sunset by the Bush administration and, since then, mass shootings have only gone up.

In that regard, then, this film does hit a political plot point that seems valid. I just wish the film could have actually managed to portray the case, its details, and everything else about the movie with care. I guess from one perspective I doubt, in the current political climate, you'd even get a movie like this, about gun control and sticking it to the gun company, made. This film came out in a somewhat less partisan time when school shootings like Columbine, and mass shootings like Las Vegas and Buffalo, weren't quit so common. Sadly, this film gets a little too preachy and overwrought to really sell its message.

In part that's due to the film letting its leads chew all the scenery they want. When you have both Hoffman and Hackman in the same movie you have to let these Hollywood heavies have their day. Certainly both actors get their chance to overact and throw their characters around the sets. These two, more than anyone else, manage to raise this film from courtroom potboiler into melodrama. It's hard to invest in the story being told with these two giving such overly sincere performances (with, in the case of Hoffman, a terrible accent) that it goes right back over to camp.

That being said, the movie, despite its two-hour runtime, still manages to feel like its glossing over all the story beats. It speeds through jury selection, the details of the case, and deliberations, all so it can get to the beats it wants to hit. It wants to paint the gun company as overly corrupt (barely changing the characters from tobacco barons to gun barons such that you can see the tracing marks from the novel), it wants Rohr to be the bad guy, and it wants out leads, Cusack and Weisz, to be heroes, but it never really spends the time to get us to care about anything going on. It's a big, glossy Hollywood courtroom drama but it doesn't give us anything meaty to hold onto. 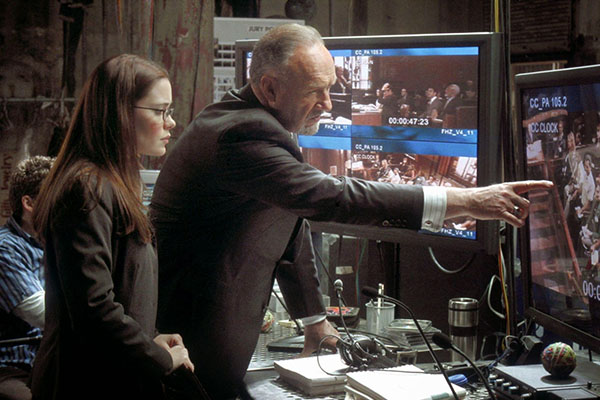 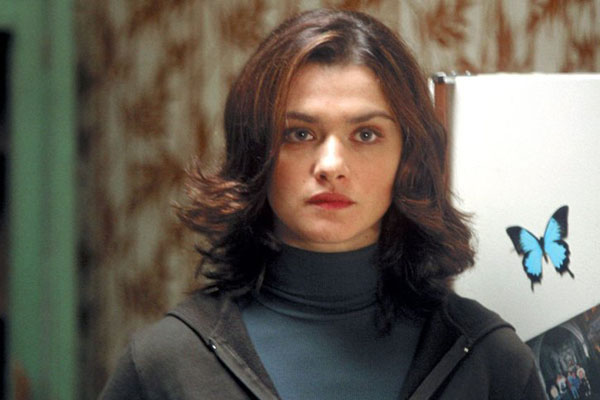 I think this is a failing of the script and editing. Clearly the writer struggled to change the movie away from tobacco, whatever the reason was, and then a lot of that story had to be cut for time reasons. Whether this happened on the script page or in the editing bay it still resulted in a film that hits all the dramatic beats but has none of the character development to make it interesting. It's soap operatic where it wanted to just be operatic, and in the end it stumbles under the weight of its melodrama.

We need a movie that actually gets people interested in a case like this, that shows, "hey, you know, guns are evil especially since we have people able to get them as easily as candy." This film, though does a pour job with that kind of story. Hell, it just does a poor job on all fronts. Not all Grisham movies are bad, but Runaway Jury is a real stinker.