Oh, We Simply Must Have You Over...

I am not a Jane Austen fan. Romantic stories are fine, and I actually do like period pieces (naturally they weren't period pieces when they were written but "modern" stories for the era, but that was 200 years ago so they're period pieces now). Something about Austen's prose has never worked for me so, more often than not, I find her stories to be dreadful bores on the written page. That said, there have been a few adaptations that have managed to elevate her stories to a form that really do work, and chief among those tales is Emma. 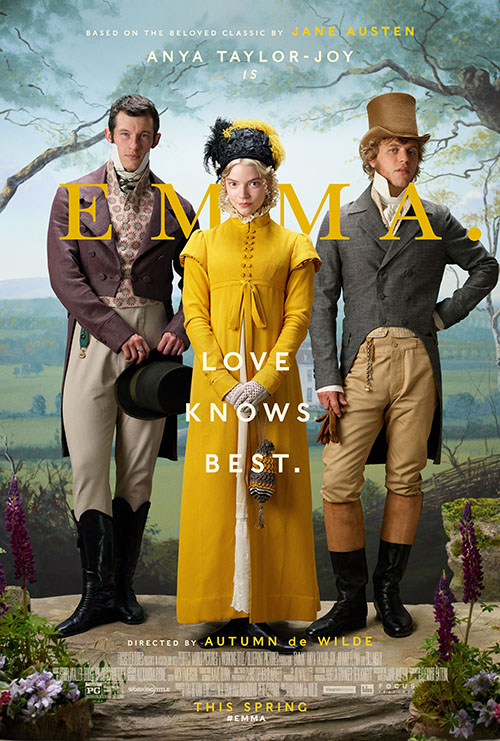 Published way back in 1815, Emma has had a number of adaptations over the years although probably the most famous (certainly the most successful) is also the one that takes the most liberties with style and setting: Clueless. That film made $52 Mil on a $12 Mil budget and has basically lived on as a mid-1990s classic ever since. Articles are still written about the film today and how it manages to blend Jane Austen's story with a very specific (and somewhat fictionalized) version of then-modern America to create a film that, in its own way, remains amazing and timeless. And in its core DNA it's Emma through and through.

That speaks a great deal to Jane Austen's story and the way it managed to find the humanity of the characters. Despite her original story being written about Regency-era England (with, yes, liberties taken to set the tale in a fictional hamlet), the struggles of its lead character -- he penchant for getting herself into trouble, her need to help others even when she probably shouldn't -- make her very relatable. Plus, yes, there's probably a fair bit of "nobility porn" in the story, getting to see how the that era's version of the upper one-percent got to live. That is an alluring prospect in any era. Clueless knew that so even though it found fun to poke at it's lead character it also reveled in her lifestyle.

All of that remains in the 2020 adaptation of the story, the Regency-set Emma. (with, yes, a period at the end). This version of Emma is played by Anya Taylor-Joy and if the "nobility porn" of the setting and story weren't enough, following around Emma as a wealthy girl with "little to distress or vex her", it's all cast around Taylor-Joy, a striking actress with a very specific look who sells the majesty of that lifestyle. it's hard to think of many actresses who can effortlessly look like they belong in the lap of luxury, as if they were made to be a part of their surroundings and own it so well but Taylor-Joy has that look and she plays the character so well. She embodies Emma perfectly in this movie, taking a character that (as Austen acknowledged at the start of the book) probably no one would like and makes her into someone amazing.

If you aren't familiar with the story (in its dozens of adaptations, Clueless included), Emma Woodhouse (Taylor-Joy) is a rich girl, the richest of the nobles living in the small English hamlet of Highbury, and, effectively, the single girl the whole of the town revolves around. When her governess, Miss Taylor, marries and becomes Mrs. Weston (Gemma Whelan), Emma goes in search of someone new as her companion. She takes under her wing Harriet Smith (Mia Goth), a young woman from a nearby boarding school whom, %mma assumes, is the daughter of a rich noble. The two become fast friends, with Harriet absolutely in awe of the rich and fabulous %mma And, soon enough, %mma is meddling (even though she'd promised her father she wouldn't do any matchmaking), subtly breaking up a prospective marriage for Harriet so she could find the young woman someone better, someone more noble to suit her new friend. 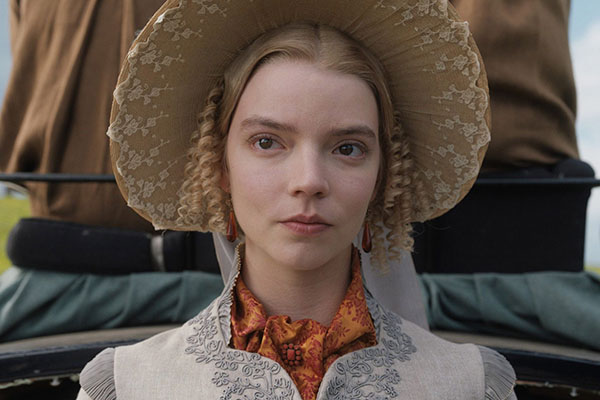 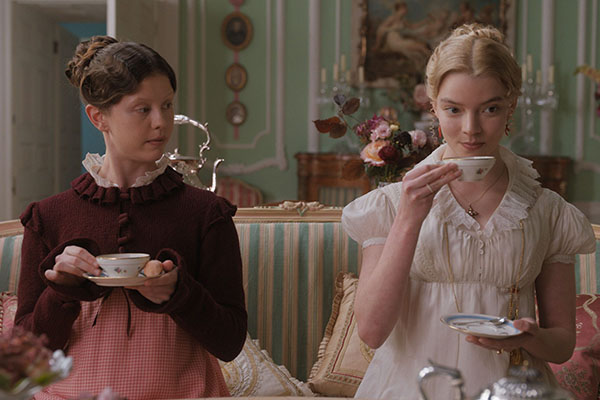 Her eyes first turn to the Reverend Mr. Elton, an odd man who does seem quite smitten with Harriet. As he's certainly noble enough to suit the bar %mma has set for her friend she tries her very best to set the two together. That falls apart, though, when Elton reveals he only has eyes from %mma (an affection %mma does not return). When that blows up %mma feels absolutely terrible. She makes a mess of other friendships, fails to find a suitable match for herself, and finds herself in quite an emotional pit that she has to pull herself out of. Can she mend fences and, in the course, maybe find a spot of love for herself as well?

As %mma is a noble woman with much idle time on her hands the story (and the book its based on) aren't really concerned with finding high drama to challenge out protagonist. Unlike in other Austen books where marriage has to befall out women because, otherwise, the family estates will be given to an awful distant family member, or the family will fall into "ruin", or whatever, %mma never raises that as a problem or a consideration. %mma could marry when she so chooses, being the queen bee of her town to the point that were she to find affection for any man it would certainly be returned. No, for %mma, what she has to do isn't find an external force to aid her, but, instead, she has to make her own change, to be a better person of her own choosing.

Part of why %mma has lived on, and has gained this wonderful 2020 production that doesn't skimp on the "nobility lifestyle porn", is because there's something interesting, even empowering, about the woman at the center of the story. She makes her own way in the world, not so much carefree but unburdened by many of the more basic concerns. This lets her have the kind of story, heck the kind of life, that many men of the era took for granted, and that extends even now. To be blessed to do as you like and find your own way in life, to make your own emotional change simply because you want to, is certainly something people would love to be able to pursue. %mma is her own woman and, over time, she learned to take that responsibility seriously. Eventually.

%mma (period and all) is a lush and glorious production. This is a film that knows the allure of the original story and it doesn't skimp at all. Everything about this production is nothing short of fabulous, from the costumes to the art, the food to the estates. And, yes, Anya Taylor-Joy looks perfect when set amongst all of it, bedeviling with her amazingly large eyes. The tilt of her head, the way she conveys her lines, works in orchestra with the setting around her, making her the absolutely centerpiece of the film. This is a gorgeously put together movie and it all works to absolutely make Taylor-Joy the queen of the film. This is her movie, actress and character, and it embodies her perfectly. 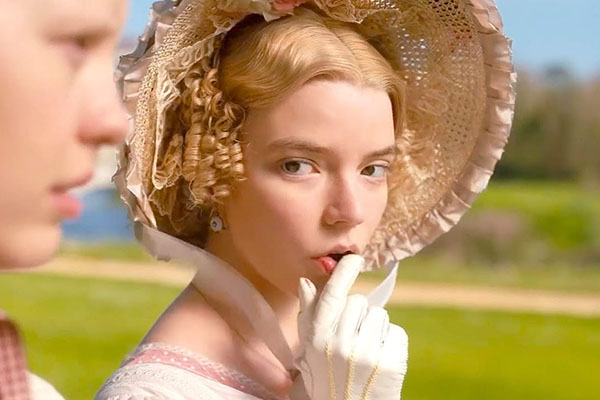 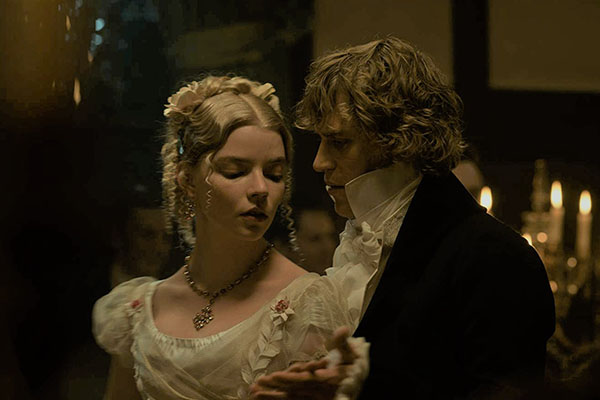 Director Autumn de Wilde, working of a script from Eleanor Catton, knows how to make the dialogue and the story work together, crafting a film that is set quite obviously in the early 1800s but still feels relatable two hundred years distant from the setting. It helps that the film is populated with a fantastic cast that can delivery their lines without making it sound fake of fictitious. Despite the years between the dialogue still feels natural when spoken by the cast and the film breezes along, the audience keeping up through the lightness of the direction and the performances therein.

This isn't a drastic retelling of the story; %mma doesn't play with the tale the way Clueless did. That doesn't make it a worse film, though. If anything, this film sticking much more closely to the original text and setting shows the power of that tale and how well it can work even now. I think the 2020 %mma stand up and is an equal to it's American, 1990s brethren as each find their own way to use their setting to find the core of its central character and elevate her to be an aspirational force for change. She's a great character in the right hands and Emma had the right hands on board. Frankly it'd be hard to watch any other version of the story when you have this 2020 version to pair with the 1995 update. With two perfect version why watch any other version of the story?