Time travel is my jam. I like stories that explore the possibilities on time travel, what it could mean for humanity, what it could mean for the timeline. Not all time travel stories need to have a perfectly happy ending and, in fact, when you explore the possibilities of time travel, more often than not they shouldn't have perfect happy endings. The buttfly effect of what you do in the past should affect your future, and not every result should be within the control of the main characters. 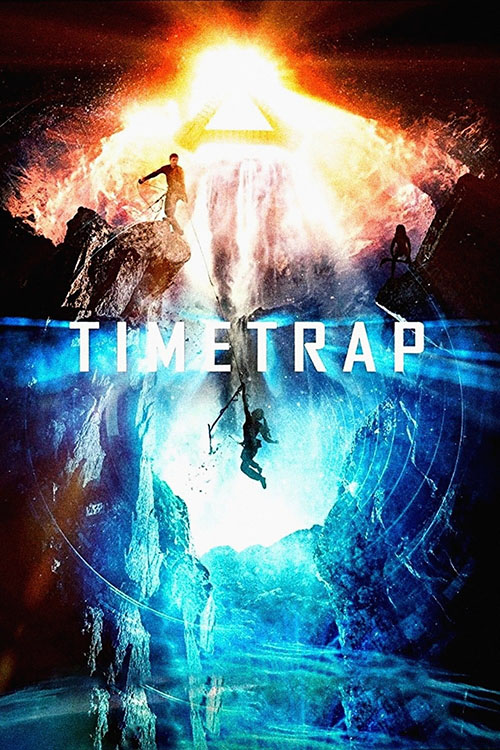 Time travel -- actually going to the past to explore that era -- it probably impossible. Actually crossing into that era without some kind of fixed point device (a device that is activated a working, allowing travel along its timeline at the fixed point in space-time) creates all kinds of physics and logistical questions that fiction tends to gloss over. How could you travel back in time to, say, the town you're standing in when the planet is traveling at thousands of miles per hour and the star is traveling around the galaxy at its own speed as well. Just jumping back even a few years would have you appearing in the middle of space only to die in the vacuum unless you had some way to orient on the planet itself as you traveled.

And that doesn't even get into the issues with how physics doesn't seem to support actually traveling backwards. Some theorize that time itself doesn't exist as we expect it, that the "past" and "future" are constructs o our perception and the only time that actually exists is right now. Being able to get around that issue, the physics of everything, would seem to make travel into the past an impossibility. But, traveling to the "future", without any way to get "back", certainly is possible. All you have to do is travel fast enough and your local time would more at a normal rate while the outside universe would move much slower, effectively sending you forward in time at great speed.

I don't know if the creators of Time Trap, a sci-fi made-for-streaming film from 2017, really had any of those deeper considerations in mind. If anything, this film feels like a pilot adventure for kids accidentally traveling through time and having to explore the new world they've ended up in... assuming a sequel or series had launched out of this afterwards. As it is, the meat of the movie involves the kids (and their professor, separately) ending up in a cavern system where the rules of time have been bent, where time itself is moving faster outside than inside. And once everyone figures that out the real question becomes: what can you do about it?

The movie focuses on college students Taylor (Reiley McClendon) and Jackie (Brianne Howey). When their professor, Hopper (Andrew Wilson), fails to come back from an expedition out to a Texas cave system (his goal to find evidence of his last family members who went missing decades prior, themselves off on a family quest to find the "fountain of youth"), Taylor and Jackie head out in search. They borrow their friend's jeep, taking friend Cara (Cassidy Gifford) and her younger sister Veeves (Olivia Draguicevich), and then Veeves beings her friend Furby (not his real name, played by Max Wright) along as well. Then it's off to the forests to find Hopper and bring him home. 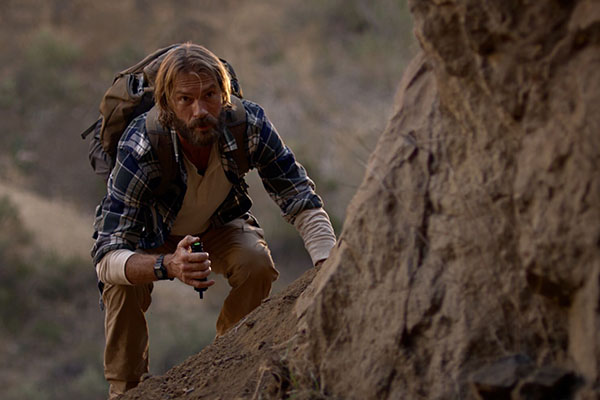 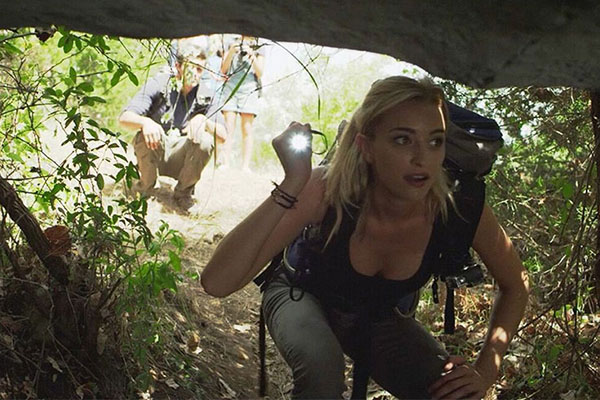 At the site they find evidence of Hopper -- his jeep, an emergency rope he dropped into the cave system to help him find his way back, if needed -- so they head into the caves in search of the professor, leaving Furby behind to keep watch in case the Professor returns. Their descent into the caves goes well enough, although they encounter a weird pressure system inside the caves. Then they find Furby's body, the kid having fallen down into the caves using Hopper's emergency rope, but what they find next really scares them: for Furby, as recorded on his Go-Pro, it had been several days outside while it's only been an hour in the caves. Soon the kids start to realize that time moves differently in the caverns, slower inside but astoundingly fast outside, and the deeper they go into the caves the faster time moves. Can they make it out again without losing years, decades even? And what happens if they spend so long in the caverns that the world they knew hardly exists anymore?

The basic idea of Time Trap is interesting, and there are some neat twists to the formula. Due to the way the caves are setup there are people from various eras -- cowboys, conquistadors, even cave men -- down in the caverns, and for all of them it's barely been any time since they entered. The caverns are, in effect, a kind of fountain of youth by grace of the fact that those trapped inside do remain youthful forever. It sort of suits the theory of how time travel could work, just with a fanciful edge thrown to it.

I do appreciate that the film commits to the way time travel works, never raising the possibility that the kids could reverse the damage to their own timeline that they've caused. The film never raises the idea that, "if we just follow the path we took in back out time will someone reverse, like walking back the mileage of a odometer". I was worried the whole time that the film would find some easy way to send the kids back to their own time but, thankfully, from the beginning it's pretty clear that won't be on the table and the film commits to it fully.

That said, there are fanciful elements that take this film from a hard sci-fi exploration of the concept. For starters, it's never explained how this cave system came to be or why. A lot of ideas are thrown around, including a quite literal fountain of youth (with shades of Indiana Jones and the Last Crusade) alongside the timey-wimey aspects of the story, but very little explanation about how things work is really ever raised. You long for characters that could really get into the science of it just to establish better how all of this occurred because, as it stands, the caverns seem to be some kind of magical device that just exists, created by some benevolent whatever and then sealed away to keep its magic out of prying hands. 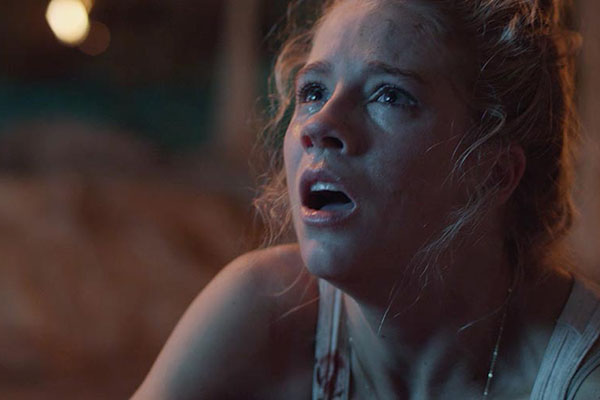 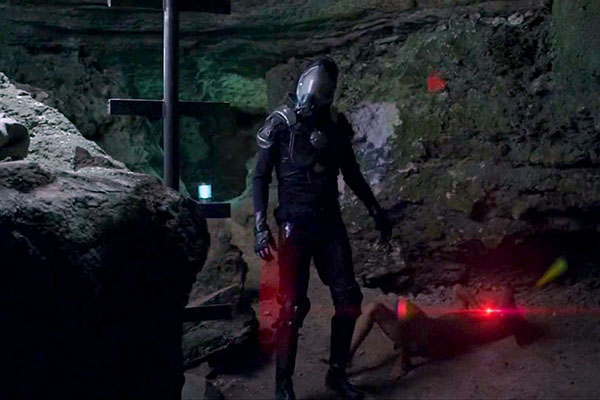 Honestly, for a big part of the movie you just long for smarter characters. The protagonists all let themselves get trapped in this "time trap", which is fine -- you gotta get the movie rolling somehow -- but then, time and again, as evidence of what is happening is presented, the kids have a hard time even understanding what's going on. Sure, yes, the idea that you're suddenly traveling quickly through time seems weird and hard to grasp, but with evidence literally slapping them in their face over and over, the kids keep saying, "what's going on?" Just... ugh.

And yet, because the film is so low-budget it actually somehow works. The acting isn't as great as it could be, and the characters are dumb, but the effects are kept simple and (largely) practical. For what it is, Time Trap is an interesting exploration of a neat idea. It's maybe not as deep, or as intelligent, as I would have liked (and I may have shouted at the characters more than once about what idiots they were being), but I appreciated the concept and how the film committed to it. There are better time travel films out there but this one has a hook that works really, really well.