Growing out of the action spectacle of the 1980s with stars like Arnold and Sly creating films full of giant, muscle-bound men gunning down hordes of dudes without taking a scratch, the 1990s found themselves in a weird place. The ever growing spectacle had an upper limit for how far it could go before audiences found themselves fatigued. But without that spectacle, the promise that each movie would get bigger and bigger, that each film from a star would be more explosive than the last, where could the genre go. Audiences would get bored if you didn't do something bigger and better and newer, but they'd also get bored if it all became too ridiculous. 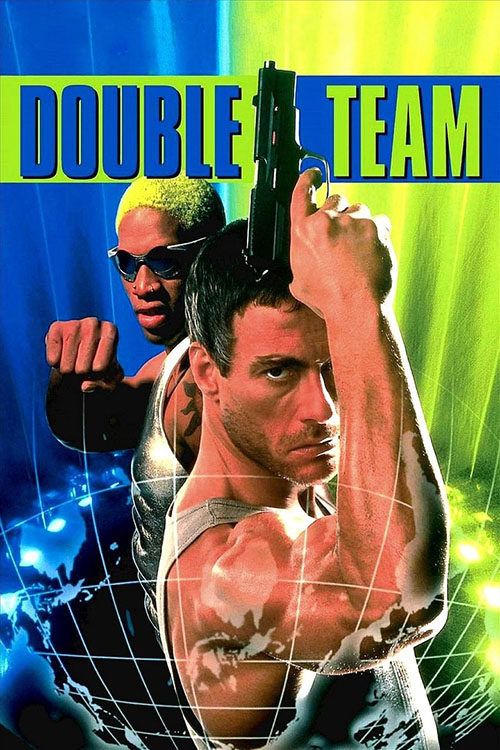 You could already see that fatigue setting in by the late 1980s as the original Die HardThe 1980s were famous for the bombastic action films released during the decade. Featuring big burly men fighting other big burly men, often with more guns, bombs, and explosions than appear in Michael Bay's wildest dreams, the action films of the decade were heavy on spectacle, short on realism. And then came a little film called Die Hard that flipped the entire action genre on its head. acted as a response to the overblown, muscle-bound action films of the decade. At least in the first film the hero, John McClane was fallible, could be wounded, and certainly didn't seem like the giant, hulking superheroes of other action films (at least, not in his first films, long before he could single-handedly take down a harrier jet). There was a decided shift in the kinds of heroes that could be in these films, and you could credit Jean-Claude Van Damme with finding a sweet spot between the two styles of action film. Yes, he was muscled but not overly so, looking a little more like an everyman than a hulking body-builder. He also was fallible and, in his early movies, he could suffer injuries as well as regrets. He tried to be every kind of hero for everyone and, early on, it worked.

Double Team, his 1997 action film where he co-starred with, of all people, Dennis Rodman, does not work. This film pretty well marked the end of Van Damme's places as an action superstar, the harbinger of doom for his career as a draw at the Box Office. Although he would have a couple of more films in theaters -- Knock Off in 1998, and then 1999's Universal Soldier: The Return -- his films post Double Team failed to find success with audiences. Very often they were bombs, failing to recoup their full budgets (with, and sometimes even without, advertising budgets included), and more often than not his movies ended up going Direct-to-Video to find any kind of release at all. The era of Van Damme was over.

Is that the fault of Double Team? I'd argue it's more the changing tastes of audiences and the fact that the perpetual high of 1980s and 1990s style action simply couldn't be maintained. The action genre would evolve, influenced by outside factors -- Hong Kong action with an emphasis on real stunts, bullet-time effects modeled on The MatrixA speculative future story with superhero and anime influences, The Matrix not only pushed viewers to think about the nature of their own reality but also expanded what filmmakers could do with action sequences and filming. It then launched a series of movies, games, and comics, creating a franchise still talked about today., and people just looking for other kinds of heroes. Hell, you could even chalk up outside factors that had nothing to do with movies -- recessions, changing norms -- that made the excess of the late 1990s feel comical, even quaint. Whatever the reason, films like Double Team found themselves released to an indifferent audience. The Box Office simply wasn't there for them anymore.

I do think that even if Double Team had been a good movie it would have suffered, but the fact is that this movie sucks. It sucks hard. This is a bad movie from any angle and if it had been released at any point in Van Damme's career it would have looked like a black mark. The fact that it came out near the end of the time when he was a Box Office draw just allows us to show how far the action genre had deteriorated, but there really wasn't anything that could be done to save this film, short of ditching all the stars, and the script... and everything else. It's just that bad. 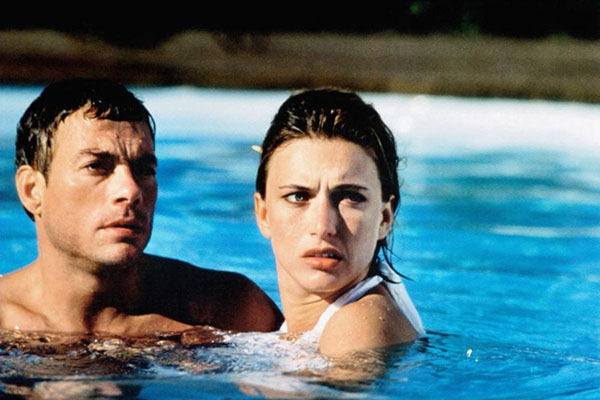 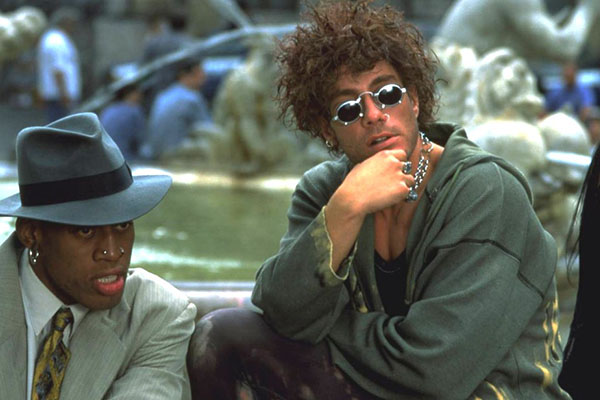 The film stars Van Damme as ex-intelligence agent Jack Paul Quinn, a man three years out from his bit, living life with his wife, Kathryn (Natacha Lindinger), in the south of France. He gets sucked back into the life, though, when his old enemy, Stavros (Mickey Rourke), appears again. Having a chance to take out Stavros, the worst terrorist of them all, is something Jack feels like he has to do. So, despite having a kid on the way with his wife, our agent packs up for one last mission to stop Stavros. He grabs gear from weapons dealer Yaz (Rodman), and heads off to the meet to find Stavros and kill him. Unfortunately the mission goes south -- Jack has the shot but can't take it when he sees Stavros's kid get in the way. Suddenly the villain senses he's about to be killed, causes a fire fight, and everything goes completely tits up. The kid dies, Jack takes a near-fatal blast, and the lights go out on that mission.

Jack wakes up days later at The Colony, a facility that was only rumored but apparently exists. Agents from the various intelligence agencies end up at the Colony when their missions go bad and they are deemed too high a risk to continue performing missions. Instead they are used as a collective brain trust to advise the next generation on intelligence and missions. Sadly once you're at the Colony you never escape, a problem for Jack as he needs to get back to his wife before Stavros finds her and kills her (and takes the newborn baby on the way). Jack has to find a way to escape, to get the gear he needs to fight Stavros, save his wife, and take down the terrorist all before goons from the Colony track him down and kill him. All in a day's work, I guess.

There are any number of issues with Double Team, but probably the most glaring is the fact that it has a pace that goes far beyond "frenetic" and right into "incomprehensible". The film never really slows down to let anything stick, instead creating a massive collection of scenes that sends Jack scurrying from one set piece to the next. It's not so much a story as it is just a collection of tropes and set-pieces, and the people in the film aren't really characters just actors spouting lines. Nothing here really sticks because the film never affords it time to develop and that hurts the overall film because we're never really given a chance to care about anything.

Think of it like this: we have a hero that we know is the hero because the film tells us in a quick bit of dialogue; we have a villain that we know is the villain because Jack tells us he's the villain; we have his wife, who Jack loves not because they really express it in any meaningful way but because Jack tells us he loves her; we have a gun-man that is the weapon-smith and he proves this by telling us that's his job. Everything about this movie is a case of the film telling us what we need to know instead of taking the time to show us anything we should care about. It has to do this, though, because the pace never lets up long enough for us to discover anything for ourselves. 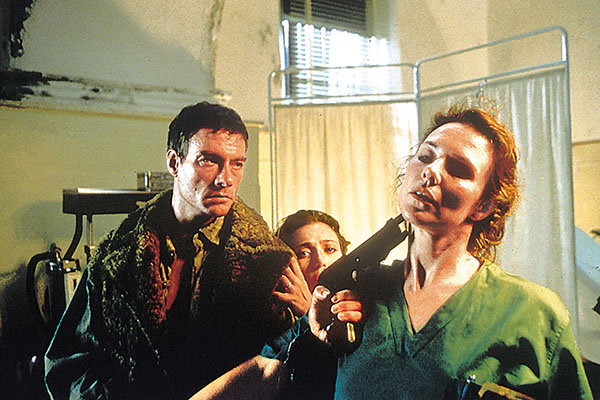 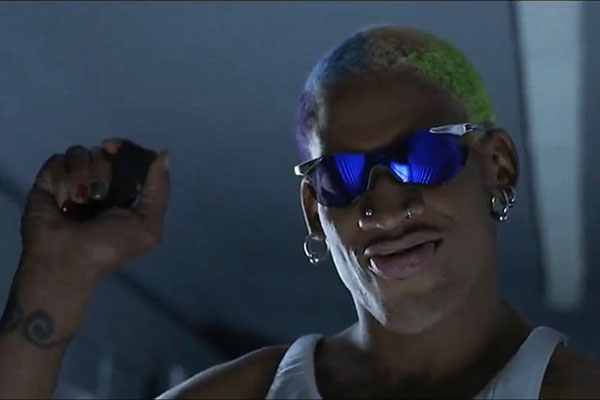 Frankly there's probably three films worth of "plot" all shoved into this single film. We have Jack's last mission, we have Jack's next last mission, we have his revenge story with Stavros, and we have the whole story about the Colony. One or two combined could have made for an interesting film, but all of these in the same film makes it overstuffed and leads to a lot of key moments getting glossed over. Characters suddenly shift opinions and change sides simply because the film needs them to be a different version to get the story moving to the next scene. Nothing really makes sense because there's just too much to do and, at 90 minutes, far too little time to do any of it.

That's not to say the film would have been a winner if it had slowed down and focused. It does still have some other flaws: the cast. Like, all of the actors here, really. Say what you will about Van Damme -- the man can fight, and he has a flexibility that made his kicks showing and dramatic -- but the man really couldn't act. He had one real emotion throughout Double Team (somewhere between stunned silence and anger) and he delivered all his lines like he was doing a mush-mouthed impression of Stallone. Rodman isn't any better, rushing many of his lines while doing the same cocky performance in every scene he's in. And then Rourke is, well, Rourke, doing the same indifferent performance he'd deliver years later in Iron Man 2. It just doesn't work.

The action doesn't even live up to expectations. While Van Damme can fight, the cinematography and editing barely let you feel it. He has some good brawls but, for the most part, it's pretty clear when he's actually performing his stunts and when a stunt-double is going the work. There's no raw intensity, nothing to make you ooh and ahh over how cool the action is. It's rote, poorly films, and unbelievable even at the best of times. And Van Damme's action is the best of the lot; the best that can be said for Rodman is that he acquits himself decently without being a complete embarrassment in his action scenes. That is not a rousing endorsement.

All of this factors together to make a film that is way too silly for it's own good. The characters can't settle into real roles so they just do whatever random thing the script requires of them. The story whizzes by so fast, even introducing that sci-fi, Prisoner-style Colony, that it all exists in a sense of heightened reality. And then the action keeps ratcheting up and up, without ever feeling dynamic, so it all takes on a sense of a very poorly put together cartoon. When you factor all that plus the cheesy 1990s dialogue filled with one-liners you end up with a film that is so tonally out of whack you almost wonder if the creators were trying to make an anti-comedy instead of an action film. 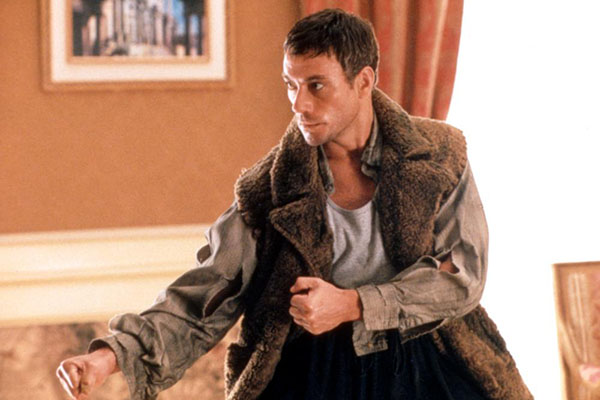 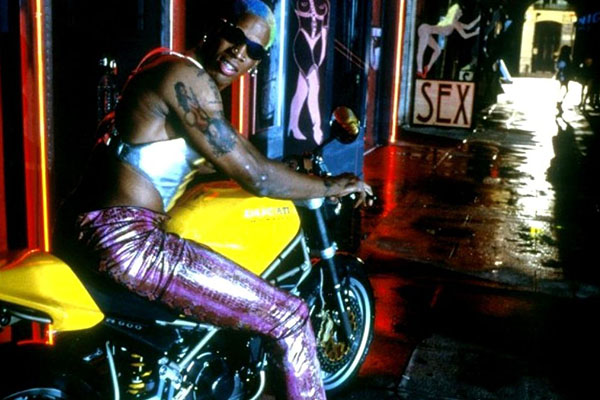 I don't know any other way to look at it but that this film is beyond saving. It's a bad film made badly, start to finish. I've seen Van Damme in other films that were decent (again, he's not a great actor but he sometimes lucked into good films) but this is probably one of the worst things I've seen come out of the 1990s action genre. There's bad, and then there's Double Team.