Traveling Fast and Furious Through Time

Is there any author whose works have been more hit-or-miss than Michael Crichton? Sure, arguments could be made for various other authors -- how many terrible movies have come from Stephen KingRIsing to fame with the release of his first book, Carrie, Stephen King is one of the most prolific, and most successful, American authors (in any genre, not just horror). adaptations? -- but it does feel like Crichton has had plenty more misses than hits based on his novels. If you lo0ok at his list of productions, you have the movies based on Jurassic ParkWhile ever kid has dreams of seeing dinosaurs, Michael Crichton gave that dream a reality, at least on paper. His two Jurassic Park books spawned a movie franchise that's gone five movies strong (with no signs of slowing down), all because people love seeing dinosaurs made flesh., you have his WestworldWritten and directed by Michael Crichton, Westworld depicted a theme park with thrills and dangers unlike any that currently exists, all to highlight the hubris of man when the park inevitably descends into chaos. The movie spawned a second film, Futureworld, and a popular (and twisty) HBO series. fare (which, as many have pointed out, Jurassic Park is just Westworld but with dinosaurs), and then you have ER. Everything else is either derivative sequels or one-off movies that no one thinks about. Who really cares about Rising Sun, or Sphere, or Disclosure? 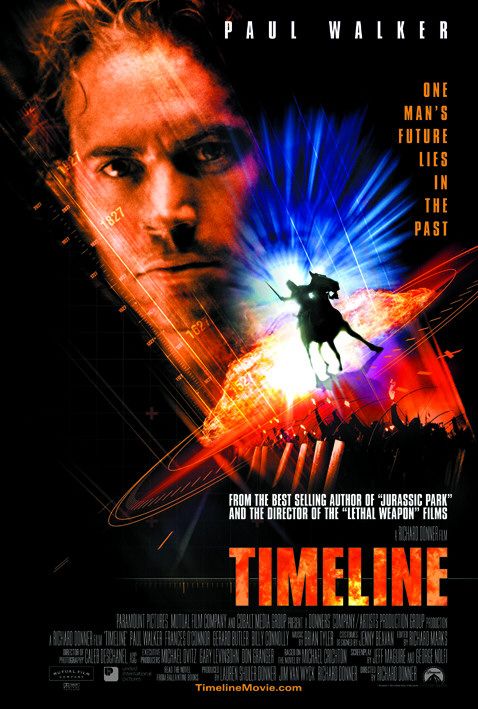 It's that sweet, sweet dinosaur money that made Crichton a household brand for a while there, but that hasn't stopped producers from trying to adapt his other works, and in 2003 we had yet another mediocre adaptation thrust onto the market with Timeline. Based on the novel of the same name, this is yet another story of "science gone wrong" backed by an "evil corporate type only thinking about money", leaving "a group of heroes to escape while they get picked off one by one" by the monsters of the story (in this case, evil British knights in Medieval France). It hits all the tropes of the Crichton oeuvre showing that, really, the author just didn't have that many good, or original, ideas.

I went into Timeline the movie fresh, having never seen it before watching it just recently for this review (I saw it on HBO Max and thought, "fuck it, why not?), but I had at least read the novel long ago (when I was really bored one week). I'm a fan of time travel so anything with that hook is going to at least get me to to consider paying attention. The novel, by the way, is just fine; it's exactly what you expect from Michael Crichton, and the film more or less adapts the broad beats of the novel, making this one of the more faithful adaptations of his works (although the last bit of the ending is mangled, ruining a deliciously evil last scene).

That, however, is also the problem because the film casts a basic, and very generic "this is the mid 2000s" cast and then puts them through the paces of the rather threadbare book. If the film seems silly that's because the novel wasn't really that much better -- a shallow thrill-ride in novel form, as Crichton so often wrote -- and the cast is forced to make of it what they can. It's a big budget (for the time) blockbuster that somehow feels small and cheap all because the story just doesn't have any depth. When you put all the pieces together you end up with a film that feels much worse than the sum of all its meager parts.

The film opens at the dig site of Castleguard in France, the site of a key battle between the Brits and French in 1357 AD. There, after occupying the impregnable castle for a long (although I think undisclosed in the film) amount of time, the French gain a decisive advantage after the Brits, in an attempt to demoralize them, killed the sister of the French leader; but instead of demoralizing them, this inspired the French to fight for her honor, swarming the fort and taking back Castleguard. We learn all this from adjunct archaeologist Andre Merek (Gerard Butler) to his class of students at the site. Meanwhile Chris (Paul Walker), son of the dig site's leader Professor Edward Johnston (Billy Connolly), hangs around the site, hitting on another archaeologist, Kate Ericson (Frances O'Connor), and generally ignoring the history going on around him. 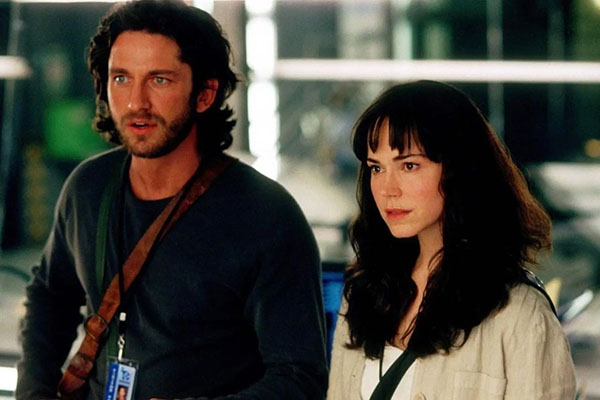 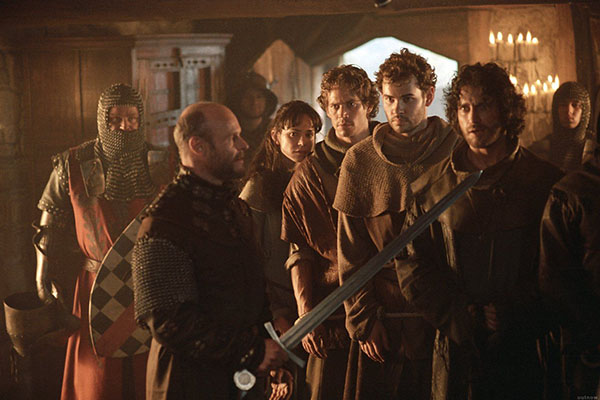 That changes, though, when a rather curious find is discovered at the site: papers signed by the professor that, when carbon dated, put them as being signed in the 1300s. They also find a single lens of his bifocals, an invention that wasn't created for another 400 years. This seeming impossibility seems to all spurn from ITC Corp., the tech company sponsoring the dig. When Chris, Kate, Andre, and their team head to ITC they're told that the Professor did sign those papers because, surprise surprise, he's actually stuck in the past. Now the team of archaeologists have to go into the past, via the device ITC has created, and save the Professor before time is irrevocably changed.

There are a number of factors that hold this film back from anything approaching greatness, but the number one issue is that, on all fronts, this film just feels cheap. That's not just with the cast, who all were still in "up and coming" mode -- Walker was riding low after the relative failure of 2 Fast 2 Furious; Butler took a lot of bad roles and was still four years out from his star-making turn in 300; and O'Connor... is eternally an also ran in her own career -- but also the sets, the costumes, and everything else. Hell, the film doesn't even feels like it was films right, done by a second unit crew with the wrong cameras and gear. Everything about this film feels like it was done to save money, this despite it's $80 Mil budget, a shockingly large amount of money spent on a film this bad.

Not that the story in the film would feel dynamic whether it had all the gloss in the world or not. This is, frankly, a really shallow film that plays out almost exactly as you'd expect. The first fifteen minutes setup the story of the dig site, and every mystery or curious thing they discover there should be filed away because all of it will be used, by our lead characters, once they go back in time (proving that they're the ones that caused all of it to begin with). Then the team goes back in time and stumbles their way through the events, with ever character that doesn't have a real story getting killed off one by one. In the end the heroes survive, and end up causing the exact victory they were studying 600+ years later, learning a new respect for the dig site and life lessons learned along the way. Oh, yay.

I think that's my biggest problem with this film: despite the setup of all that story of Castleguard at the outset of the film, Timeline doesn't actually care about it's setting at all. Everything about Castleguard is just set dressing for the heroes to wander through, but there's no actual depth to anything. The "town" portion of the set feels about as developed as the shops at a Renn Faire while the French "camp" is little more than a couple of tents. Nothing her has the size, or substance, you'd expect from even a (small) historical epic, and when even shows produced on Basic Cable do a better job of investing in their historical settings (despite smaller budgets), you really feel the lack of investment here in this film. 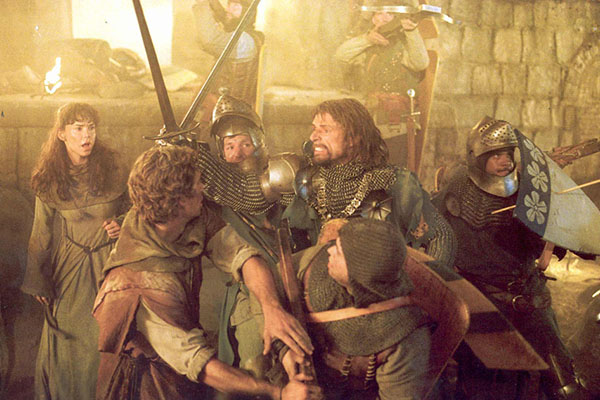 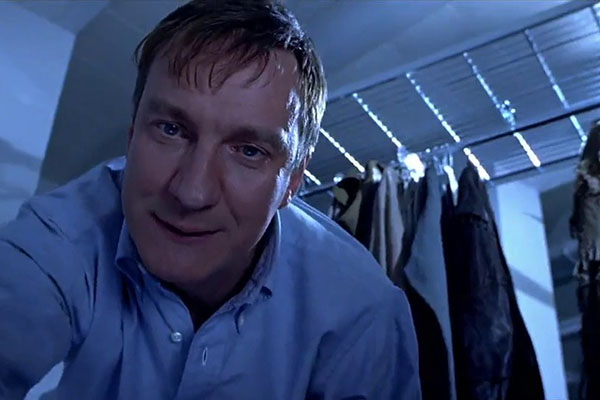 The only time that the film actually rises and becomes interesting is when Butlers Andre shared screen time with Anna Friel's Lady Claire (sister of the French leader who, as we learn, was fated to die). Butler and Friel have palpable chemistry, to the point that even though they only know each other for a day you do actually buy their love story (because every Hollywood film has to have a love story, or two). It's a better, more engaging story than the mild, and barely evidenced, love connection between Walker's Chris and O'Connor's Kate. The movie comes alive when Butler and Friel share the screen and you really end up wishing they were the focus and not just the C-plot.

I didn't come away hating Timeline, but that's in large part because I have low expectations for any of Paul Walker's work. The guy really only had one acting mode -- lovable doofus -- and most of his pictures were as likable, but also as silly, as their lead actor. Timeline doesn't really work on any level, but it has a shaggy dog quality that at least makes it watchable once. It's hard to recommend the film, though, because it really is just so bad at doing, well, anything. It's a low-stakes, poorly made time travel "epic" that could have been better if it had been in completely different hands (and, you know, with an extensive rewrite).