A Farce of a Mystery, a Mysterious Farce

Adaptations are a standard part of Hollywood. For as long as movies have existed there have been producers creating films based on popular works of the era (the 1911 Frankenstein being a clear example). Books, music, and video games have all proven fodder for Hollywood films. But the thought of a adapting a board game, a form of entertainment that's generally quite scant on plot lines, seems pretty far beyond what could work for Hollywood. 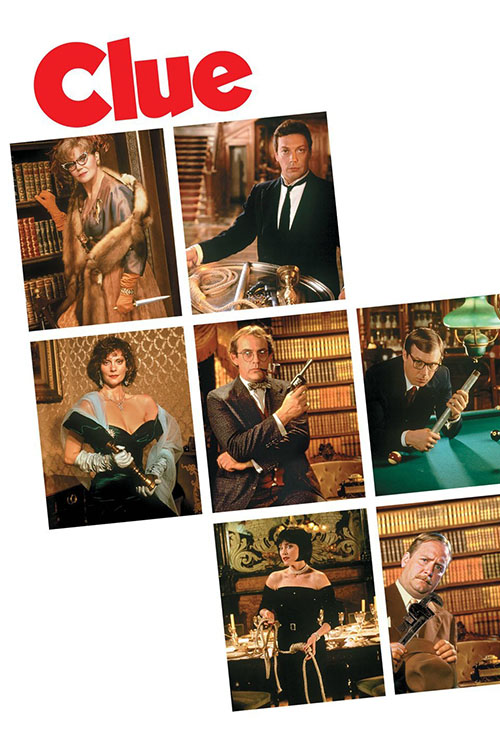 Certainly there are some board games what would make for worse adaptations than others. No one is desperate for a Connect Four film, and it's hard to say that the original Battleship really lent much material to the eventually alien invasion film "inspired" by the table-top game. Only certain board games could even conceivably work as a movie; Clue is one of them, if you come at it from the right angle. It's a playable version of an Agatha Christie story, in a sense, just with everyone coming at the mystery near the very end.

For a movie based on a murder mystery, though, Clue comes at the source material from a different perspective than you might expect. Instead of a tense and serious mystery about who killed Mr. Body, the film treats it like a dry farce, a light comedy of errors that gets more and more over-the-top as the story moves on. It has very little in common with the Agatha Christie-inspired source material, and while that might not have put off some viewers back in 1985 (despite it being considered a classic now, Clue didn't recoup its budget back in the day) but it's certainly given the film legs ever since.

The film starts innocently enough, putting on the guise of a murder mystery proper (and, for critics back in the day that were expecting a murder mystery, this is the only part of them film they liked). We're first introduced to Wadsworth (Tim Curry), the butler taking care of an old, spooky mansion. He's setting up a party for a select group of guests -- Eileen Brennan as Mrs. Peacock, Madeline Kahn as Mrs. White, Christopher Lloyd as Prof. Plum, Michael McKean as Mr. Green, Martin Mull as Col. Mustard, and Lesley Ann Warren as Ms. Scarlet -- all of whom are being blackmailed by Mr. Boddy (Lee Ving), although we don't immediately know it. The guests arrive one by one, are introduced by Wadsworth, get drinks from the maid, Yvette (Colleen Camp), and then sit down to a meal prepared by the cook, Mrs. Ho (although unnamed in the film, played by Kellye Nakahara).

Things take a turn, and the tension ramps up, when Mr. Boddy arrives at the party. It's revealed that he's the blackmailer of each of the guests but, even more importantly, he's brought each of them a gift: a weapon. They're all complicit, all have something to hide, but if any one of them were to use the weapon and kill Wadsworth, the only person with nothing to hide at this point, they could all leave and go back about their business. Instead, though, the lights go out, there's confusion, and Mr. Boddy ends up dead. Suddenly its a race to figure out who the killer is before more people die (which they do anyway) and the cops arrive. 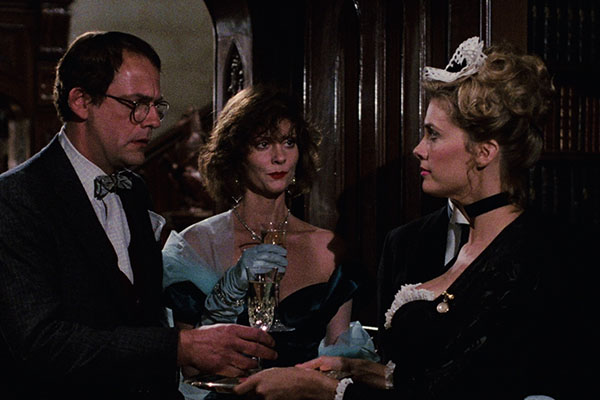 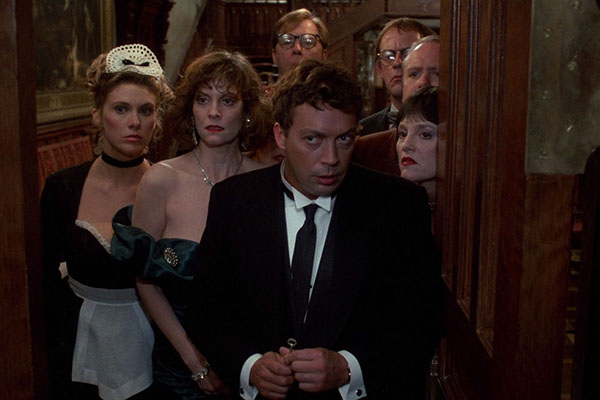 Any description of the plot of the film makes it sound like a dull murder mystery but Clue is anything but. It's a farce, and after the initial opening to set the scene and introduce all the characters, the film starts to really layer on the comedy. Amusingly, the moment bodies (or, really, Boddy) start dropping, that's when the film finds its humor. For me, that's when the film really begins to take off, to find its feet and pick up energy as it goes along.

Deep down, Clue is a very silly movie. The script itself doesn't seem that silly, but it's in the performances of all the actors, the direction of their actions, the way everyone says their lines, that takes what could be perceived as a dark and serious film and turns it into a dry farce. That's part of it's charm, that the film takes characters in a desperate situation and finds a way to laugh at, and with, them as they go along. It's a solid move, too, because if this were just a normal murder mystery I don't know if it would be as fondly remembered. It'd be the movie people would have expected back in 1985, sure, but would it have been anywhere near as fun? Would it be as special?

The actors are what sell this film, that make it such an enjoyable comedy of errors. The real stars of the show are Curry, Kahn, and McKean, not that the rest aren't also great. It's these three, though, that everyone remembers the most. Curry takes his usual Curry persona, scenery chewing and a touch vile, and then amps it up to manic proportions as the film carries on. Kahn, of course, was a wonderful performer who could take any line reading and imbue it with style (plus she's one of the only actors on set allowed any room to ad-lib, as show famously in her "flames on the side of my face" meandering line). And McKean is the steady presence in the film that gets to be the comedic salve for any situation. These three were relied upon the sell the comedy, to make the mystery into a farce, and they really went for it.

The presence of Kahn, if no one else, should have been a hint to audiences that this wasn't going to be a dramatic film. Admittedly, the studio really didn't seem to know what to do with this movie when it came out, as the trailer couldn't quite sell the tone, leaning a little too much into the "mystery" aspect without playing up enough of the humor. The film strikes a delicate balance, bringing the humor in more and more over time but the trailer just waivers between tones and undersells everything. Maybe it audiences had known better what the film really was they would have flocked to it. Instead all the fine comedic performances in this delightful little movie fell like a dud when the film came out. 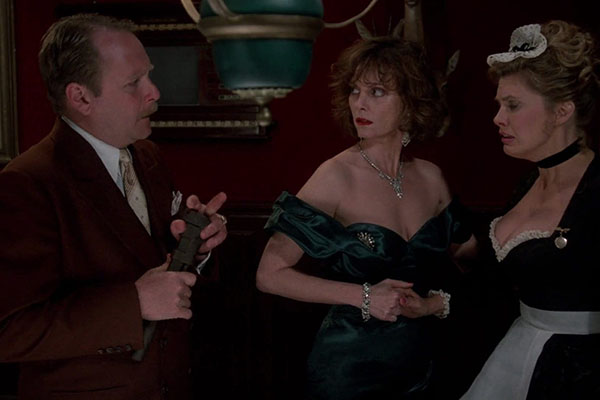 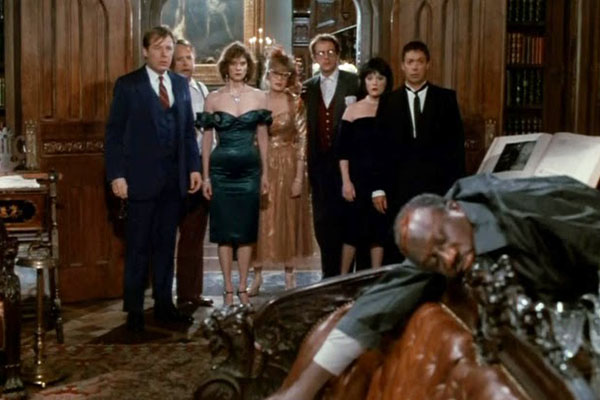 Thankfully, it's failure at the Box Office made it perfect fodder for cable movie channels -- it didn't make much money so it was cheap to license after. The film was a constant presences on networks like HBO and Showtime before moving to regular rotation on Comedy Central (where it lived for years), making it a mainstay for kids growing up in the 1980s and 1990s. Without the thought of having to pay to see the film in theaters, viewers would turn up at the channels, start watching, and then come back again and again because what else was there to do? And then the magic of the movie grew on people. Everyone started to realize just what the film was about and why it was so darn good.

That's why at this point the film is regaled as a classic. It's no longer a Box Office flop but a beloved comedy for a certain generation. It's fun and funny, with a dark, comedic tone that really works. Plus, of course, it has just enough attachment to the original game (with it's amusing, multiple endings) that it feels true to the source material without being beholden to it. It's a great adaptation in spirit while finding it's own tone, which is the biggest reason why the film works so well. A true murder mystery might have been more in line with the source material but then it would have been just another murder mystery. This, instead, is Clue made in a way that was fun and fresh and interesting, and over the years more and more people have come to embrace it. Not bad for a little Box Office bomb.