What a Twist, a Sci-Fi Adventure

as I have noted before, I am picky about the books I pick up. While I like genre works, sci-fi and fantasy, I don't like all works within the genre. High fantasy generally doesn't thrill me, and sci-fi that feels too fictional also loses me. I find I like something that's generally grounded, with fair rules the reader can follow, such that I can understand the sci-fi twists of the realm as I read along with it. If the science feels like magic then it not longer sinks its claws into me. 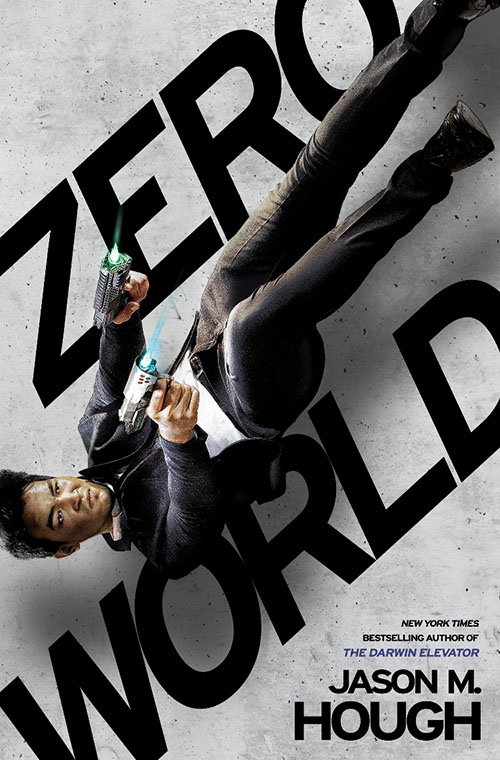 I think that's part of the reason why time travel and parallel world stories are generally right up my alley. Usually the point of those stories is to shine a light on our own world by twisting one thing as a means of exploration. The time travel (or parallel dimension hopping) might be magical in some respect but the travelers then have to work within the set rules of our world, our time, to navigate their adventure. Books that can give me a grounded hook like that are ones I'll pick up to explore just in the hopes that I have a new author to enjoy.

On its face, Zero World seems like the kind of book I actually could enjoy. An antihero assassin is sent on a voyage that puts him on a parallel Earth seemingly quit like ours in makeup but, shockingly, quite far behind us technologically. That's an interesting idea to explore, looking at parallel development of similar (arguably the same) base world. But the devil is in the details, and where Zero World falters is in trying to do too much with its base premise. The book keeps layering on idea after idea to the point where it's grounded hook becomes untethered. The exploration of the parallel world is cool, everything that comes afterwards starts to feel like so much techno-drivel.

In the book we have Caswell, a gifted assassin who, due to an implant in his head, doesn't remember any of the kills he's committed (just how many he has due to a tally system he keeps on the sly). The implant, once activated, gives Caswell a specific window of time to commit his kill. Once done, his memory is then wiped back to the time the implant was activated, eliminating any knowledge he may have gathered along the way. This keeps him as the perfect tool for covert corporations: he can do the wet work but they never have to worry about him learning any trade secrets he could use later.

Sent on a mission into space to find information from a derelict ship, Caswell suddenly has his implant activated mid-mission, an unusual step for the kind of work he does. Soon, though, Caswell learns the reason: this ship has data on a way to travel to parallel world, one almost exactly like Earth just about 100 years back technologically. Worse, there's someone that managed to escape to that world, with our technological knowledge, and they could be infecting it with these new ideas, causing all kinds of havoc. Caswell has to travel to this parallel world, called Gartien, and stop the chaos that could already be happening.

When reading Zero World I found that its greatest strength was in the fact that you could never really tell what was going to happen next. The book opens with Caswell back from a mission, waking up in his hotel room to find out just how many people he'd killed (but not any other detail about it). Expecting to go on a vacation, as is always the way with his normal routine, taking time off before his next mission, he's shocked to get called out for another hit. The setup makes Caswell out to be some kind of Jason BourneLost without his memory, but bearing a particular set of skills, Jason Bourne has to figure out who he is and just why everyone seems to want him dead.-style killer, just with a Phillip K. Dick technological twist. That immediately twists, though, when Caswell is sent into space. Wait, we're doing a sci-fi story?

Settling in with that version of the tale, then, like a dark twist on any space adventure, we're then thrown another twist when suddenly a parallel world is revealed. Then we have further twists at each step of the way as the world of Gartien is revealed and then various facts about the mission, about the reality of the situation, and about who is sending him on this hit-jobs, all comes to light. The twists due keep the book moving at a solid, steady clip. You really never know what to expect or just where the book will take you next.

At the same time, though, the novel also eventually wears out this twisty mechanic. I liken it to M. Night Shyamalan who always has to put some twist (or, more recently, twist after twist after twist) into his movies. This novel feels like that, sped up and done repeatedly, always pulling the rug out from under you. It's thrilling at the start but tiring by the end. Worse, it actually ruins its own sense of momentum due to the inevitability of each twist as they happen.

The way it felt to me was that, by the fifth twist, I was already preparing for something to happen. The writing is solid enough that I could never guess what the next twist would be but I could already feel it coming. I know the book was just itching to pull the rug out again so when it happened the next time, and then the next, it no longer felt shocking or revelatory. The book pulls the trick so many times that by the end of it the next twist is just rote and mechanical. "Oh, of course this happened. The book had to do it again." Again, like M. Night Shyamalan.

I think the worst sin, though, is the fact that the book doesn't have an ending. It's meant as the setup for a series (or at least a duo of novels), setting up a solid premise to explore in later adventures, but the novel itself ends essentially mid scene. Some even bigger twist happens and then the novel is like, "stay tuned next week for another trilling adventure at Zero World!" That's galling enough when you've read 400 pages and expect something, even just a small moment, to cap the novel and give you a sense of rest before the next adventure picks up, but it's made worse by the fact that this novel came out in 2015 and since then there's been nary a peep of a sequel. Nothing to cap the adventure you just read through. No closure.

There are enough solid ideas to fuel several novels from author Jason M. Hough. The writing is clean and crisp and I did enjoy the various ways that Zero World explored its concept. There's so much going on in the book that I didn't want to spoil any of it in this review (so I only cover the meat of the prologue chapter and just slightly more). Clearly tis book was a work of passion, with the author pouring every cool idea he had into its pages. I can respect and appreciate that, and it is a fun read for a good portion of its length.

Where it loses me is in all its twists leading to a lack of ending. It feels like the author simply ran out of steam in the end and wasn't sure where the take the heroes from here. Maybe he has some master opus he's working on to complete this set, but I think it more likely that Zero World simply won't get the conclusion we need. That leaves it as a work floating untethered, a novel with one twist too many (at least) that keeps it from finding its closure. Had the book found some kind of ending at any point in its run I might have liked it better. As it stands, though, I just can't recommend the novel due to the flaws in its plotting. As well written as it may be the end result leaves a lot to be desired.