A long while ago I read a few of the Laurel K. Hamilton "Anita Blake, Vampire Hunter" novels. Back when those books first came out they weren't bad as they had plenty of monsters in them (vampires and zombies and werewolves) with a fun and snarky lead character. I enjoyed the first few titles and liked how the books managed to convey a different version of our world that felt fleshed out and detailed. The books eventually devolved into little more than romance novels and I bailed at that point, but the early books were decent, up to a point. 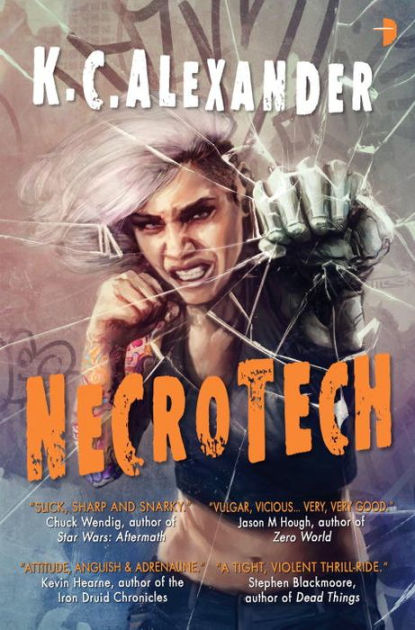 Those books weren't written by the same author as Necrotech, a novel I recently picked up that was written by K.C. Alexander, but I see the same kinds of writing tropes in this novel as I saw in those old vampire hunter books. It has another snarky female lead who shoots first and asked questions sometimes never, a girl who has to resort to violence at every turn because she deals with violent people, and someone that always has a running monologue in her head full of quips and snark all the time. One of the big reasons I bailed on Anita Blake, and it wasn't just the devolved romance, was because I found the character tiring and I felt the same way here in Necrotech. It has a great world, close to our own, but I don't know if I can stand the lead heroine long enough to bother with a second volume.

In the novel we're introduced to Riko, a street-thug known as a "splatter specialist", someone that is called in to do the violence (the wet work) while others handle other aspects of a job. Riko's first moments in the novel are waking up on a cold medical table naked and unarmed, unsure of where she is or how she got there. As she quickly learns (after escaping the building as some very bad shit goes down within) she's lost three months of her life that she can't account for and her credibility with all her old allies is completely in the toilet. She doesn't know why, and she doesn't even know if it's her fault, but she's screwed all the same.

In that building, an underground corporate chop shop, she saw her girlfriend get manged by necrotech. In this future everyone has nanites in their bodies, a necessity to keep people alive after the ozone layer was blasted away. Most people have not only the nanites but other kinds of cybernetics in them as well, but the human body can only take so much abuse. As people get injured the nanites begun to ramp up and up. That, compounded with enough cyber-tech, can lead the nanites to take over a body, becoming a beast of nothing more than need and violence. This is necrotech and Riko's girl, Nanji, became one of the necros. Riko needs to find out what happened, why, and whether it was her fault, and to do that she'll have to make some uneasy alliances to get her (very violent) job done.

As the first part in what is apparently going to be a whole series of "SINless" books (the "SINless" are those that have their SIN ID burned away, leaving them outside the government system, and Riko is one of those SINless), Necrotech honestly leaves a lot to be desired. As I said, the world build around this book (and the future books to come) is interesting, a mash-up of Johnny Mnemonic and Cyberpunk, but the actual story told within is shallow and lacking. It's clear that the author has a plan for this heroine but I'm not sure the plot really is able to carry all the ideas at play.

To start, Riko never really has a plan at any point in this book. Her job is to bring the violence and make things go "squish", and the book is perfectly able to convey that. The rest of the time, though, she's just floating along, following a linear path of clues that other people give her. She's never really in charge of her life at any point in the story and each time some new clue comes up she has to have someone else explain it to her. This leaves a disconnect between heroine and quest as she's never an active participant.

It also leaves us, as readers, disengaged from the main plot line as none of the clues come up organically. Everything is simply given to Riko, discovered or researched by other characters, so we never get enough of a flow to the story that anything sticks. With a world this detailed and far enough outside our own modern setting things can't just be handed to us, we have to discover them and learn them ourselves so it all makes sense. Having all the clue just happen around us leaves it all shallow, floating outside our understanding such that we never really care about it.

Riko, also, just isn't that engaging of a character. Whenever something happens to her, Riko's first instinct is to fight, to push away, to stop a connection from forming. This never changes across the whole of the book, mind you, so she's just as removed from everyone around her at the end, unable or unwilling to make real connections to the characters introduced in this book. We never get a good idea of the person within Riko, even though the book is told from her perspective, leaving a great void at the middle of the story.

About the only thing we really get from Riko is cussing and snark. Any time the author needs Riko to engage its so she can say "shit" or "fuck" at people. I'm all for characters realistically cussing -- they're adults and that's what they would do. A character needs to exhibit more than that, though, for us to actually understand them and Riko never lets us in. We're as removed from her, only getting swear words instead of understanding her at all. We know she had a troubled past, and that she does have some people she used to care about, but we never get an explanation for that, or anything else, that would have added needed shading to this character. We're at a remove and it sucks.

The worst part is that we don't even get a solid ending in this book. I get this is going to be a series of novels but the first book in a series traditionally gets the character to a point where the major plot threads of that book are resolved. We should at least know what happened to Riko in the four months she's missing, who she was and what she was doing. Those answers, and so many others, are missing by the time the book ends. Riko is essentially at step two of her journey, having taken step one when she jumped off the medical table at the start of this book, and lord only knows how many more steps will have to happen before we get any answers. All I know is they aren't in this book and I really hated that.

Necrotech is an absolutely confounding novel. It has a great world, and some interesting characters on the periphery that we never really get to learn about. Instead we're stuck with a lead character that doesn't give us anything more that superficial storytelling and quips, riding through a story that gives us no resolution. As far as bad pilot stories are concerned this is certainly up near the top for leaving me disinteresting in ever seeing anything more of this story or this world again.