Ah, Something Even I Don't Want to Collect

I make no secret about how much I love Castlevania. I have been a fan of the series since I picked up my first game -- Castlevania II: Simon's Quest, in case you're curious -- and I've tried my best to keep up with the franchise and get every title I can (I'm just missing Castlevania: Legends on game Boy and, legit, I think that copy was stolen back before I had a spreadsheet tracking all my games). If it's Castlevania I will eventually get it. While I wouldn't go so far as to name a child after any character in the series (Alucard for a boy is a stretch too far), "Soul Steal" does make a fetching name for a kitten. 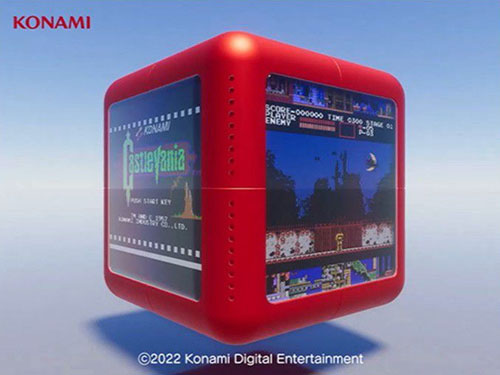 it would take a lot, in other words, for Konami to put out an official Castlevania release that would make me say, "no thanks." Hell, while I have no particular interest in the pachinko and pachislot games in the franchise I won't deny that having one of them setup in my house would be an attractive conversation piece. Konami can put out some really stupid crap and if it has the Castlevania logo on it, the thing will get at least my passing interest at a minimum (and then I'll write up something about it for my Castlevania site, The Inverted Dungeon).

That bridge too far, though, was just reached earlier this month when Konami announced that, in support of the 35th anniversary of the franchise, they would be releasing a series of NFTs. Yep, non-fungible tokens to celebrate Castlevania. I've never said "nope" to something Castlevania related so hard in my life. Again, I want to own arguably the worst game in the franchise, Castlevania: Legends, but NFTs are right out in my books.

For those not in the know, NFTs (non-fungible tokens) are the new hotness in crypto circles. If you've heard anything about "cryptocoins" (digital money that's stored "on the blockchain", that requires "mining rigs" to earn, and hen are traded, like stocks, on the coin markets), this is like those coins but even dumber. As a short explanation: An NFT is a file that's stored on the crypt blockchain and this file says you "own" a picture that's stored Online somewhere. It's like a certificate of authenticity for a work of art, except the work of art is digital only, like a JPG or a PNG, and the certificate only gives you the address for said JPG or PNG. So what you bought, with all this fancy crypto money, is a receipt for a picture you can't touch that, by the way, anyone can download and have for themselves because pictures aren't secured Online and all you have to do is "right-click, save as" to grab a picture. Oh, and if the site hosting the picture ever goes down then your receipt points to nothing.

If all of that sounds like an elaborate ponzi scheme, well, it is. But crypto bros are all fucking in on NFTs and you can't go anywhere Online without hearing about "NFTs this" or "NFTs that". if you want to make money, and gobs of it, NFTs are apparently the way to do it and all you have to do is make something that can generate a bunch of NFT images (usually some very basic piece of art that you very slightly alter over and over again) and then sell them (again, you're really just selling the receipt for these digital images, and no one will ever ask you for a print of them or anything) and then you can make mad cash.

That's the theory behind it and, right now, just about every big business is trying to get into the business of NFTs. Anti-virus corporations are trying to install crypto programs on people's computers, big browser groups are looking at accepting digital currencies as payments, and video game companies are looking at ways they can leverage their IPs to create NFTs people want to buy (so they can then make that sweet NFT cash). NFTs are like stocks if stockers were dumb and had no real inherent value in physical society... oh, so exactly like stocks.

Now, I don't want to make it sound like I'm shitting on Konami just because they're doing NFTs. The company, everyone should remember, decided years ago that the home console market was no longer worth their time so they started putting out (a) free to play mobile games (which, when it comes to Castlevania, have yet to ever get finished) or (b) erotic casino games. A new. proper entry in the franchise has yet to appear in... going on a decade, in fact. Konami did announce they were going to publish a new game in the series, but nothing else has been said about that title and all we have right now is a re-released of the last mobile game, Grimoire of Souls, and these NFTs to tide us over.

Sure, companies have bottom lines they have to think about, stock holders they have to please, but there's still something scummy about Konami getting into NFTs, especially when this is the first announcement they've made "in support of the 35th anniversary of the series." No one was asking for them to do this, and certainly none of the fans were looking to buy a sweet piece of an image they don't actually get to own and can only look at Online like every other dumb idiot out there. This really seems like a crappy idea.

Beyond that, bear in mind that everything done on the crypto "blockchain" is actually terrible for the environment. Mining coins takes up a lot of power (more than most household residences would use in a month, per coin) and NFTs exacerbate that even further as their transactions -- buying, selling, trading -- require hitting that same blockchain and adding even more processing strain to it. Even the stock market doesn't pollute the way crypto does, and that's saying something (one point in favor of stocks).

Really, however you slice it, this is just a bad idea. It's a bad collectible the fans never asked for. It's a ponzi scheme dressed up as corporate art. And it's awful for the environment. In short, Konami: "hard pass."