The Future of Another Timeline

Time travel is a concept that I love in fiction. I've noted this before on this site (likely several times) but I do think that time travel allows for a lot of neat and interesting stories, criss-crossing adventures that you couldn't really tell any other way. While physics dictates we'd likely never be able to time travel for real that doesn't prevent the idea from being rich for storytelling possibilities. It's just cool. 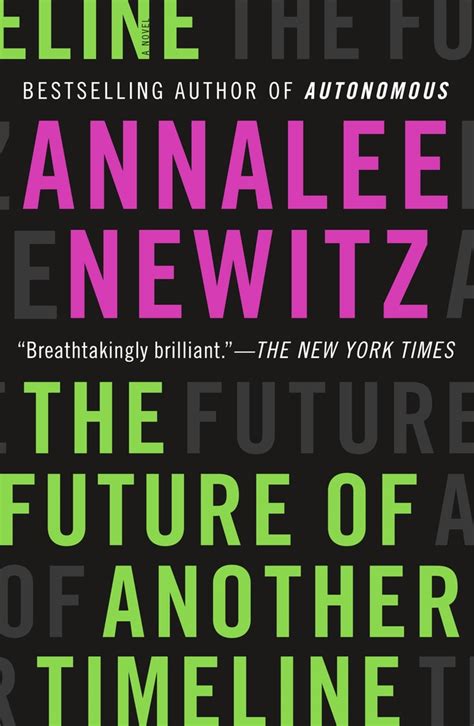 Structurally, time travel seems impossible in no small part because the way stories are generally told would mean that if someone were able to achieve time travel -- say via a souped up Delorean -- they'd travel backwards in time into the void of space. The Earth and the Sun are moving through space even while we travel on them and without a fixed point to use as your guide there would be no way to survive the trip backwards (or forwards) through time without taking all the complex spacial motions into account. You need that fixed point in space, a machine that's always running and pumping out a signal, so that you could be guided back and forth along the time stream. It also conveniently provides the worm hole that would allow the travel, one of the only ways that time travel would theoretically be possible.

The Future of Another Timeline, a novel by Annalee Newitz, is one of the few time travel novels that I've read that takes these kinds of fundamental structural issues into account. In the novel (as it revealed fairly early), the Earth has five machines on it, ancient constructs of stone that were built by an ancient civilization on Earth around the time that trilobites and other creatures were crawling along the ground. These machines, active and running since these ancient days, can send travelers back and forth along the timeline. All the traveler has to do is tap out a complex rhythm on the stones (or have a machine that can do it) and they can travel to any point from their present and back.

In the novel having his kind of freedom to travel does allow people to go back and explore any previous time period, to document history and see how things evolved naturally in time. It does, however, also allow people to make changes, and two groups have begun a battle of changes across all of time. One group, the Comstockers, want to reduce the rights and powers of women, turning them essentially into breeding slaves in the future. Another group, the Daughters of Harriet (named after Senator Harriet Tubman in their timeline) battle the Comstockers to try and prevent this change and shift the timeline back to a world where women had more rights, where abortion was legal (which it isn't, in any form, in the novel), and where equality once again could be attained. And the Daughters have to act fast as the Comstockers are looking for a way to sabotage the machines and prevent time travel at all once they make their edits.

If it wasn't clear from the plot, The Future of Another Timeline is a very political book. Written at the tail end of the Trump Presidency, it feels particularly prescient as forces work to undo much of the progressive agenda and, well, progress made over the last 200 years. Trump's coalition, guided by fear and hate, seem like the kinds of people that would be interested in sending humanity back a good 100, 200 years, to send us back to the "good old days" when men were men and times were (supposedly) "simpler". It's not hard to see this story as a reaction to all of that, an outlet of fear and worry about the direction the world is taking.

It's also a very personal book for author Annalee Newitz as characters and situations in the book are based on her own past experiences. As told from the perspective of two main characters, the novel follows one woman, Tess, who works with the Daughters and actively travels through time to make changes. The other side of the story follows Beth, a young woman just getting ready for college who has problems at home (an abusive father) and issues with her best friend (another girl who has a murderous rage deep within her). The two stories do converge, but they also help us view the time travel crux of the story from different angels and see the changes as they happen. But through it all, you get a deep sense that Newitz is using these characters to connect to something inside herself as well, making a deeper connection that also enriches the characters (even as they go through personal issue just like Newitz did).

Honestly, I think this book would likely be hard for some in the audience to read. It's not at all subtle about its politics, about who the heroes of the story are (the Daughters of Harriet) or the villains (the Comstockers). While Beth's friend, Lizzy, does go all murderous she does it on "bad men" and while her actions are deplorable you can understand where she comes from as she kills rapists and molesters. And at all times this compared up against what the Daughters deal with, men who want to rob women of their agency and turn them, in the distant future, in the brood mares (basically). The women in this book are complex but you'd never describe any of them as true villains.

If there's a flaw with this its that there really aren't any men that come off too well in the novel. The closest we get is a boy Beth meets late in the book who, eventually, becomes her boyfriend, but that's only after she goes through even more shit (including a pregnancy scare) that causes her to pull further away from her family. The rest of the men in the book, the male time travelers, their leaders, men in Beth's life, all generally come across as evil. There isn't a lot of nuance shown for the men of the book, not like with all the female characters. It's not a big flaw as this book ix told exclusively from its female characters and these characters are great. It's just another way to note that the book isn't always subtle about its intentions.

At the same time, though, there is a great time travel story here along with its solid (and well researched) political plot line. The idea of two factions warring against each other, battling along the timeline, is interesting. While the villeins of the piece never feel fleshed out (as they're all men and the book doesn't really pay attention to its men) the pressure of trying to save the machines, and the timeline, feels very real. The book does a great job of setting up its tech, its scenario, and then exploring the ways the whole system could come down. The structure of the story and its time travel is excellent.

And the book does address one other major factor of time travel: paradox. Tess and Beth, as is revealed in the course of the story, have a connection and Tess desperately wants to help Beth, to save her from a major problem coming up. If sh does she could save someone from her past and maybe ease some guilt. But doing so would also cause a major paradox because them someone Tess knew follows a different path and that changes everything from Tess in the process. How this change affects one of our heroines, and the ramifications after, are interesting in their own right (in a way that I really don't want to spoil).

All around I think this book was really excellent. As I'm not a Trump person I didn't have an issue with the overtly lefty politics of the book and I did enjoy the twists and turns the story took as the Daughters worked on their mission. I do think this is one of the better crafted time travel tales, both in engineering of the deus ex machina at the center of the story as well as in how the novel uses time travel to further its storytelling goals. While this novel won't be for everyone I think those that won't mind the politics, and enjoy an intriguing time travel story, will find a solid read here with The Future of Another Timeline.