It's easy to give crap to actors working on the CW. That network isn't exactly know for it's high quality shows, generally airing teen drama and soapy productions. Even its "good" shows, such as the works in the ArrowverseWhen it was announced that the CW was creating a show based on the Green Arrow, people laughed. The CW? Really? Was it going to be teen-oriented like everything else on the network and be called "Arrow High"? And yet that one show, Arrow has spawned three spin-offs, various related shows and given DC a successful shared universe, the Arrowverse on TV and streaming. aren't really that good -- they're fun, at times well acted, but the small production budgets given out by the CW means that the shows are always fighting between what they want to do and what they can get away with. Often this leaves the shows feeling campy and silly (although the best of them, such as Legends of Tomorrow, lean in to that vibe). 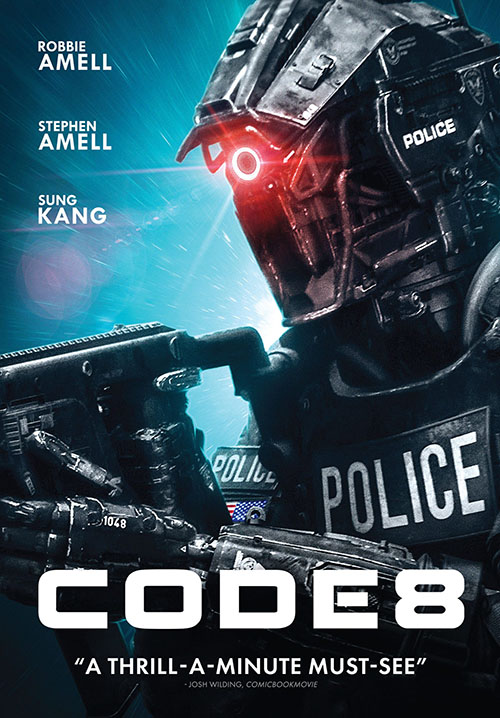 But with the shows on the CW being kind of dumb you also want to lump the actors on this shows into that same boat. "Oh, they're in the CW so clearly they aren't that good." I would have agreed with that sentiment years ago, but then I saw the movie ARQ on NetflixOriginally started as a disc-by-mail service, Netflix has grown to be one of the largest media companies in the world (and one of the most valued internet companies as well). With a constant slate of new internet streaming-based programming that updates all the time, Netflix has redefined what it means to watch TV and films (as well as how to do it).. It's a little sci-fi riff on Groundhog Day starring Robbie Amell (who played Firestorm in the Arrowverse), and I was frankly impressed. The movie is a tight little adventure and Amell carried it all really well. Despite having been on, effectively, a superhero soap, Amell had real acting talent.

That's the prime reason why I checked out Code 8, the new superhero drama that was co-produced by Robbie Amell and his brother Stephen (aka Green Arrow in the Arrowverse), with both of them backing a big Indiegogo campaign to get the film financed. I've seen more than one think-piece about the film in the last couple of weeks with those articles noting that "everyone is watching Code 8" and I was intrigued enough to find out why. The obvious answer, upon viewing the film, is that it's a well-plotted, tightly produced little superhero drama that stars both Amells doing their best to sell what's going on. It really works.

In Code 8 (the feature-length film based on a short film also called Code 8 and also featuring the Amells), we're introduced to Connor Reed (Robbie Amell), a down-on-his-luck guy just trying to support himself and his mom with whatever work he can get. Like 4% of the population in the world, Connor has powers -- he's an "electric", and a very powerful one -- but because of his powers the rest of the world hates him. He can't get work, he's despised and shunned whenever people see what he is, and (of course) the police constantly harass him.

With his mom sick and dying, Connor is desperate to make some cash. That's how he ends up falling in with Garrett Kelton (Stephen Amell) and his crew of criminals. Kelton works for Sutcliffe, a mid-level drug dealer specializing in peddling Psyke (a drug made from the spinal fluid of specials). The money is good but it requires Connor to do some very bad things. This puts him on the radar of the cops who quickly come calling. This leads Connor to come up with the idea of one big, last score, enough for him to get his mom the care he needs and avoid the wrath of the cops before everything comes crashing down on the his head. 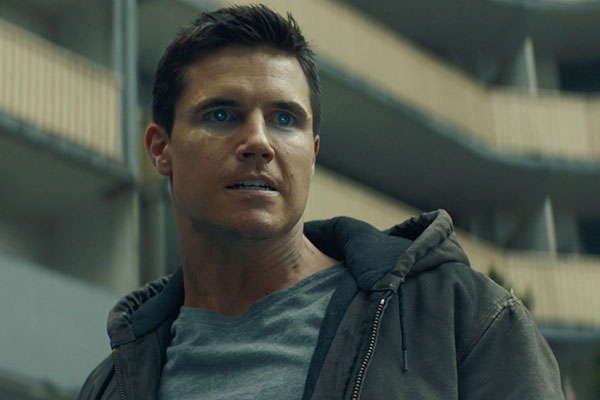 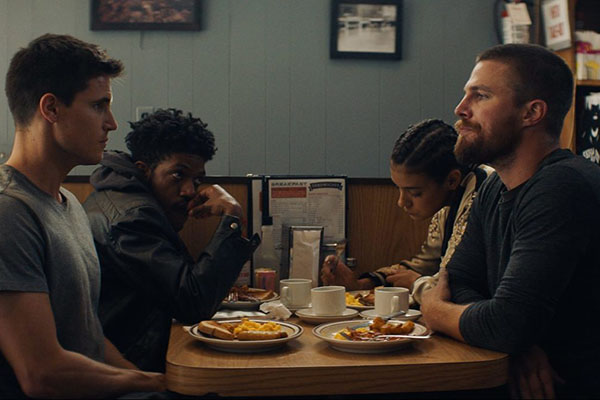 The basic story of Code 8 is probably it's weakest link. At it's core it's a blend of "guy falls in with the wrong crowd" and "one last big score" tropes, all tied up in a generically seedy criminal underworld (that's barely explained). Connor's path through the movie is pretty obvious -- he resists the easy money, then joins the crew and finds he likes being able to unleash his powers, and then things go to far and he has to find redemption -- and the story doesn't really tread any new ground in that regard.

Why it works, though, is because the film has a real scene of setting. The world of Code 8 is believably fleshed out, with a real sense of the history of the world and how the primary setting, Lincoln City, got to be the way it is. The film wisely opens with montage of news footage quickly giving us the history and scope of the world, before dropping us into the "present day" and letting us experience what it's like to be at the ground level with this setting. It's smart and effective in this regard, and by giving us the setup so early we can quickly become invested in the characters as we now understand where they come from.

Sure, specials being hated by the general populace isn't new territory (it's the bread-and-butter plotting of the X-MenLaunched in 1963 and written by Stan Lee and Jack Kirby, the X-Men featured heroes distinctly different from those featured in the pages of DC Comics. Mutants who didn't ask for their powers (and very often didn't want them), these heroes, who constantly fought against humans who didn't want "muties" around, served as metaphors for oppression and racism. Their powerful stories would form this group into one of the most recognizable superhero teams in comics (and a successful series of movies as well)., after all). But where most superhero productions use this setup to craft a tale of saving the world or finding the ability to rise above it as a team, Code 8 stays at the ground level. There's no redeeming the specials in the eyes of the law, no rising above the mire to become shining beacons of hope for humanity. The world doesn't change over the course of Code 8. Hell, if anything, the situation overall is worse for Connor at the end of the film that it is when it begins (although I won't spoil why).

It's refreshing in that regard, then, as Code 8 takes all these tropes but doesn't tell us the final story we'd expect from it. No one ever casts around the term "hero", so while this film tucks into the superhero genre, it's not a superhero tale. It's a solid crime drama that just so happens to have superpowers thrown in the mix. But because it visualizes a world with special powers it also takes the time to explore what that means and the complications that could cause. It really understands the kind of story it wants to tell, the world it's telling it from, and how it all ties together. That's really solid. 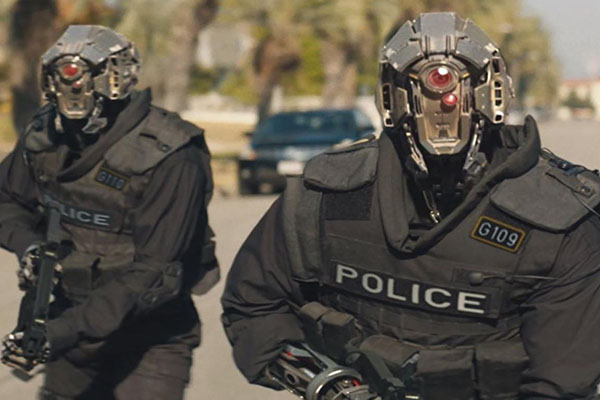 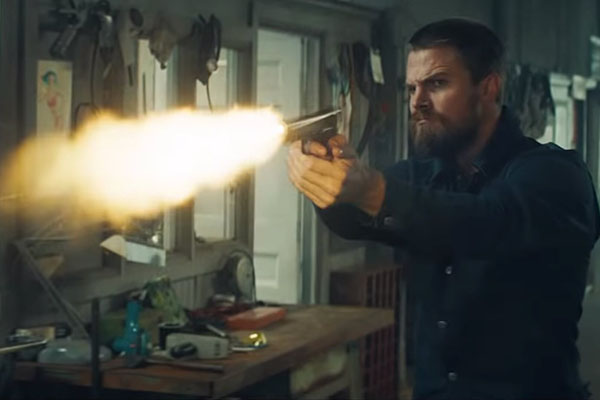 And, frankly, it all works because of the cast. It's the two leads, the Amell brothers, that sell that material better than anyone else, investing fully in their characters and this story. This is clearly a passion project for them (having been with the project since the 2016 short film, and they are plotting to continue with the story and the world for a short-form series on Quibi) and the invest fully in their parts to help sell it. This movie wouldn't work without them, that's for sure, as frankly just about everyone else in the film lacks the same level of grounded focus and commitment to character the two Amell brothers give. None of the rest of the performances are bad, per se, but they aren't to the same level as Stephen and Robbie.

The film is a sci-fi cheapie, for sure, but the people at the core -- the two Amells along with writer/director Jeff Chan (also with this project since the short film, and continuing onwards) -- really strive to sell it. It might seem like just another low-budget film debuting on Netflix, but once you get in you find a really solid, well produced, well designed little superhero film. I'm interested to see where this franchise goes from here, for sure. But I also think it's time to stop giving every CW actor shit. They aren't all bad, as Code 8 solidly proves.