A Platter of Fish (and Violence)

It's hard to understand the influence Quentin Tarantino had on Hollywood. For years after the release of his second major film, Pulp Fiction, every two-bit writer/director thought they had what it took to be the next Tarantino, to try their hand at making movies they way he did. They saw his blood, profanity-laden, at time hyper-violent crime films and though, "yeah, I can do that!" 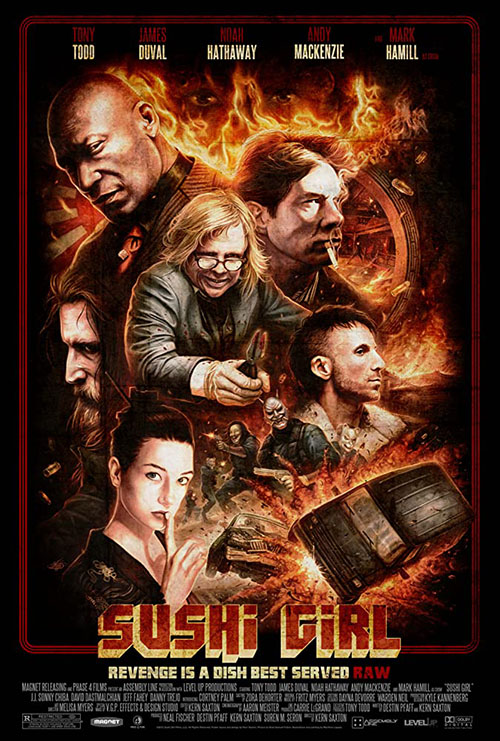 The fact is, thought, that most can't. Although there were a few rare examples (The Way of the Gun springs to mind), most people can't quite grasp the way that Tarantino told his stories, how he used the grindhouse and exploitation aesthetics of the movies he loved from his youth to craft sprawling, yet engaging, gangster dramas. Hell, even late-period Tarantino struggles to find the same magic he once had (personally, Once Upon a Time In... Hollywood just didn't work). If you invite comparison to the director's famous works you have to be ready for disappointment.

That, of course, brings us to Sushi Girl, a 2012 crime drama directed by Kern Saxton that neatly fits into the "like Tarantino films, but..." category of a video collection. It has many of the same stylistic touches Tarantino himself used -- racial and cultural epithets, lots of violence, and a crime whose timeline is told out of order. The film definitely invites comparison to Reservoir Dogs in its construction and slow build to a violent end. But it's a twist that the film is building to and also the part of the film that betrays it. Frankly, if you're even paying the slightest bit of mind to Sushi Girl you'll see the twist coming a mile away.

In the movie, five gangsters are brought together six years after their last heist, all to find out what happened to the diamonds from that score. Fish (Noah Hathaway) is an ex-con just released, dragged to the dinner by leader Duke (Tony Todd). Also attending are Max (Andy Mackenzie), Crow (Mark Hamill), and Francis (James Duval). Oh, and the titular Sushi Girl (Cortney Palm) who, naturally, lays in the center of the dinner table, quiet and still throughout, with succulent cutlets of fish draped upon her naked body.

But dinner isn't really on the agenda. Six years ago the guys all pulled a heist (along with deceased sixth man Nelson, played by David Dastmalchian), stealing a boodle of diamonds from some underworld outfit. The diamonds, though, somehow went missing between them leaving the place they robbed and when Fish was picked up by the cops. Now Fish is the main course (you see what they did there?) and the boys will each take their turn interrogating him to find out what he did with the diamonds (which he swears he doesn't have). And, all the while, the Sushi Girl lays there, waiting for it all to end. 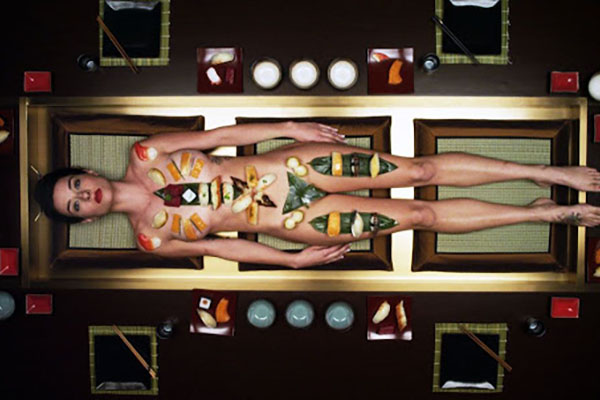 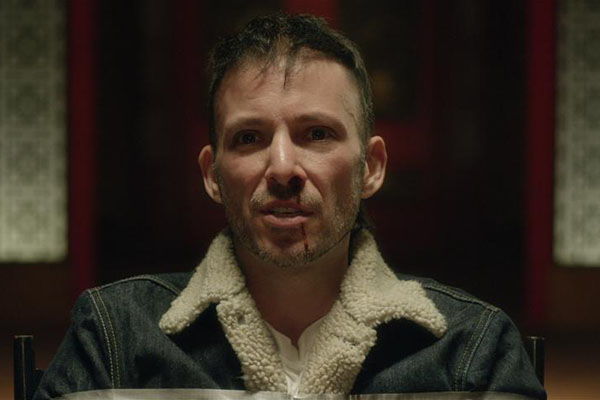 In its construction, Sushi Girl follows to specific timelines: one the present day at the sushi dinner, and then other the day of the heist. As with Reservoir Dogs we're essentially introduced in media res, after the crime has been committed and the boys are now, all these years later, picking up the pieces. We don't get the full story of what happened on the caper until well into the two-thirds mark of the film, but by then most of the action has already occurred.

The film really tries to build up the central mystery for all it's worth, using the uncooperative Fish our central figure, leaving us wondering why he won't talk and just give up the diamonds. Of course, the first of the two related twists (and spoilers for an eight-year-old movie) is that Fish doesn't have the diamonds. They got lost along the way, so when he attests that he never stashed them anywhere, he's telling the truth. All the violence and torture his supposed friends put him through is pointless because the first thing he says, "I don't have them," is the absolute truth.

Of course, you don't find this out until near the end, but it does put a nasty edge on all the horrible things we see in the film. Fish goes through hell, tortured and, frankly, butchered by the other members of the crew just so they can get their cut. It's a "pound of flesh" scenario, really, and the movie absolutely revels in showing us all the gory details (or, as much as it can while still maintaining an R rating). It's honestly hard to watch, less Tarantino than torture porn, and despite my love of gore and horror, it was almost too much for me. It's gets to be hard to stomach once the guys really start going to town.

Part of me says that it would be more engaging if we cared about any of these characters, but we just don't. The only person given any real character development is Fish -- he was married, with a kid, but now his ex won't take his calls and his kid calls someone else "daddy" -- but then none of this development actually plays into the events of the story so it's all color without substance. Still, he's better than the rest of the guys; Duke is obsessed with Japan, Crow is gay, Max is a violent beast, Francis is a coke-head, and Nelson has one odd story he tells about shitting (and then dies). These are not character traits to get us involved in the movie, just ticks the film uses in place of actual development. It's shallow and it weakens the events. 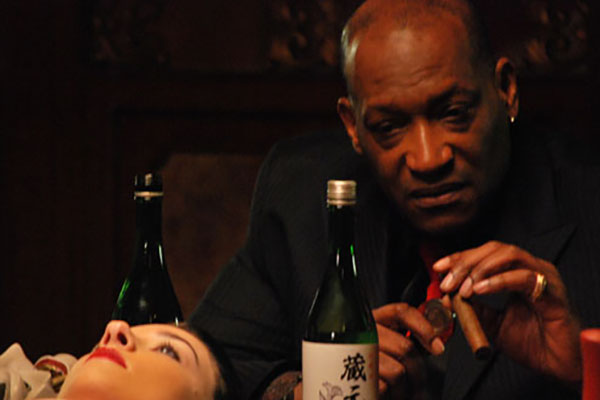 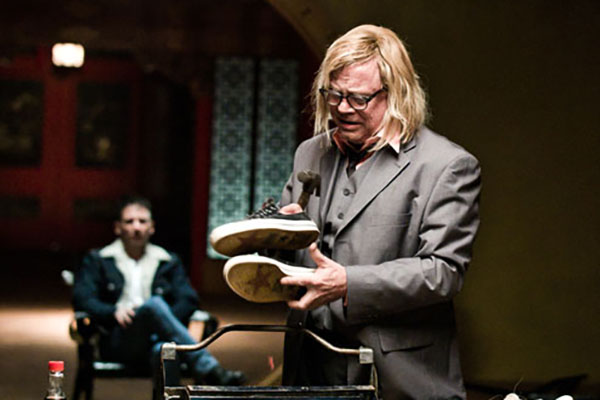 Compare that to Reservoir Dogs, a film that actually puts in the work to develop all the people in the film. Yes most of them are bad guys but, because the film takes the time to develop their characters, we end up caring about them regardless. That means that when the violent carnage starts up we have a genuine emotional response. There's no gut punch like that in Sushi Girl, no reason to care who dies, when, or how. It's all just pulp and gun smoke.

The one character that even seems like a genuine human being is the Sushi Girl herself, and that's because the film takes the time to cut to her once in a while to see her emotional response to the carnage going on around her. And, yes, she is naked through out, which I think is meant to show her vulnerability and exposure in this situation. Certainly actress Ford plays that up, eliciting the kind of emotional response I think the film wanted from everything going on in the movie. It's a solid performance, and about the only really good job in the film populated by underwhelming caricatures.

It's really disappointing, in fact, because there are so many good actors in here. Tony Todd (Night of the Living Dead, Candyman), Mark Hamill (Batman: The Animated Series, Star WarsThe modern blockbuster: it's a concept so commonplace now we don't even think about the fact that before the end of the 1970s, this kind of movie -- huge spectacles, big action, massive budgets -- wasn't really made. That all changed, though, with Star Wars, a series of films that were big on spectacle (and even bigger on profits). A hero's journey set against a sci-fi backdrop, nothing like this series had ever really been done before, and then Hollywood was never the same.), character actors like James Duval (Donnie Darko) and Noah Hathaway (The Neverending Story), and even cameos from Jeff Fahey, Michael Biehn, and Danny Trejo. There is a wealth of solid actors in here, most charisma and talent than could fill any one of the sets used for this low-budget affair. And yet its the silent Sushi Girl that does the best work of all in the film.

But even there the film betrays itself. The film is called "Sushi Girl" -- maybe just to get people interested in seeing a naked woman for the whole movie if for no other reason -- but it also means that the whole time you're sitting there, waiting for her part of the film to really begin. She's tied to it, somehow, right? Like she'll have some bigger purpose in it all, because otherwise why call it "Sushi Girl". And, sure enough, she is tied to it -- she's not just some random girl pulled in to act as a platter, but she was at the scene of the crime as well and, of course, she knows what happened to the diamonds. It's a cheap rug pull that was probably supposed to be revelatory but, again, with the movie having the title it does it's 100% expected within minutes of the movie beginning. 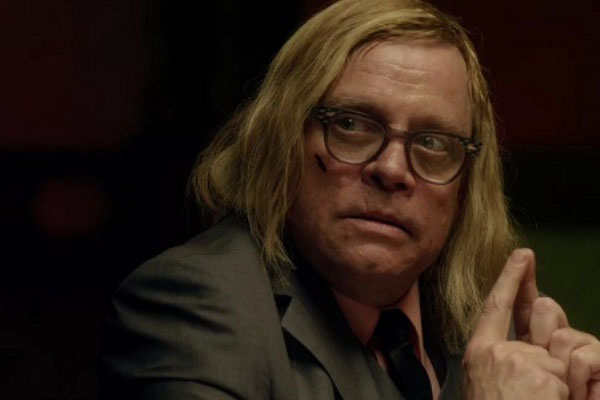 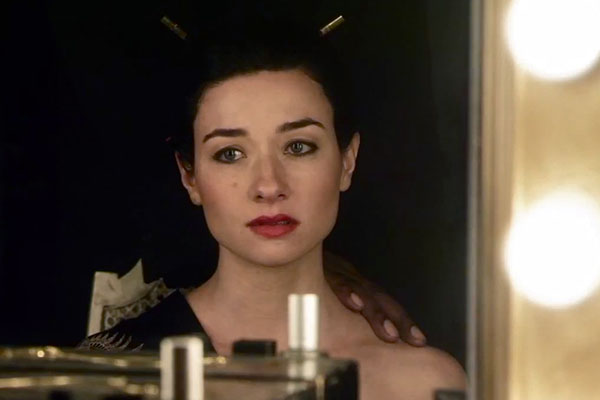 Sushi Girl is a well shot affair with more talent it deserves, that's for sure. But in story and construction it's little more than a dim-witted Reservoir Dogs. Beyond some game performances and a fair bit of titillation, there's little in this movie that really rewards watching. Once you know the twists (or have guessed them ten minutes in) it'll be hard to bother with the film ever again. It tries, but Sushi Girl fails, hard.