The Zombies Visit a Petting Zoo

Zombies are a popular monster in media. While they can be effective as scary creatures -- just go back and rewatch the classic Romero films to see how good zombies can be -- most "zombie" films don't actually feature proper zombies at this point. Really, as far as classic media is concerned there are two types of "proper" zombies: the true voodoo zombie which can walk and talk like a human, or the Romeo zombies that are slow, animalistic ghouls that feed on flesh. For a while, the Romero zombie ruled Box Office, but then came along smarter zombies, faster zombies (and rage-infected humans), and a whole lot of zombie comedy. 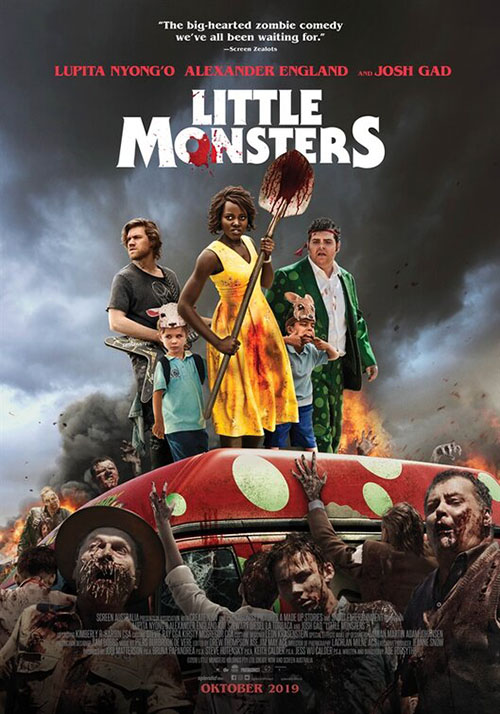 In popular media right now it does feel like funny zombies are having their day in the sun (getting all gross and manky). Outside the Walking Dead (which, at this point, is unintentionally hilarious), the most popular zombie productions have been comedies. Zombieland (which is getting a sequel this year) and Shaun of the Dead both made a killing (pun intended), and then you have lower-budget fare like Black Sheep, Cooties, and today's subject, Little Monsters. And, in the case of today's film, so long as you aren't looking for a serious bit of zombie action, funny zombies certainly do work as a subject.

We're introduced to Dave (Alexander England), a failed heavy metal guitarist still clinging to the dream of being a successful rocker. He's in a failing relationship and, when things go completely sound, he's forced to stay with his sister, Tess (Kat Stewart), and her son Felix (Diesel La Torraca). Dave is the worst person to have around Felix as he's a foul-mouthed, irresponsible dirt bag. But Felix just might be the best person for Dave as the little tyke forces Dave to think about people other than himself. Of course, first Dave has to have a wakeup call, and that will come, unexpectedly, from Felix's 2nd grade teacher, Miss Audrey Caroline (Lupita Nyong'o).

Miss Caroline is an object of desire for Dave so when one of the chaperons for a class trip to a petting zoo has to bail, Dave steps in just so he can be around the teacher for a day. The petting zoo itself is a pretty lackluster affair, punctuated by a performance but awful child entertainer Teddy McGiggle (Josh Gad). Things get shaken up, though, when zombies break out of a military base conveniently set near the petting zoo. Soon the zombies have overrun the park and it's up to Dave and Miss Caroline to somehow keep all the kiddies safe when there's a pack of munchers pursuing them. And, in the process, Dave might just finally grow up a little.

As a zombie comedy, Little Monsters is most concerned with providing laughs instead of scares. It's like Zombieland in that regard as I never considered that movie to be all that scary -- it uses a few simple jump-scares to punctuate the laughter, but actual horror is never the goal. Little Monsters takes that same tack, using a few gory moments to set the scene (and give some characters much-needed payback), but for the most part everything in the movie is fairly tame, focusing instead of the situation and the comedy that can be derived from it. 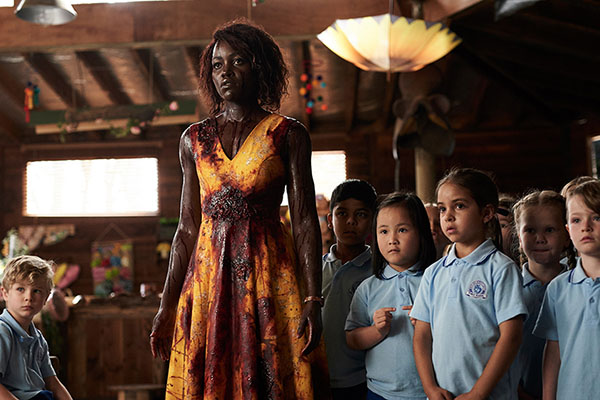 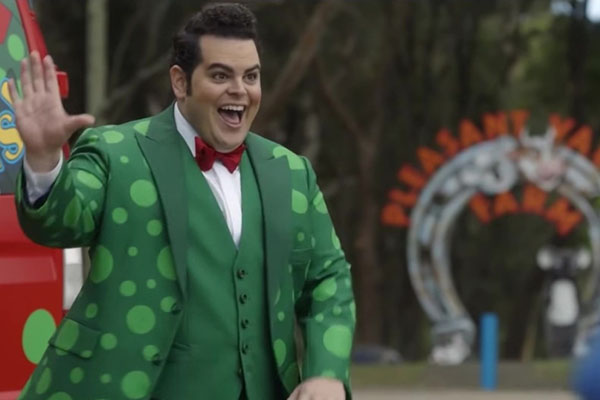 If I had to guess, part of the reason why the scares and gore aren't that prevalent is because the cast is made up primarily of little kids. I'm sure the producers didn't want to expose the little tykes to anything that would give them nightmares after, so much of the zombie carnage and action happens on the periphery to characters that don't have to share scenes with the tykes. It's a smart move if the goal wasn't to traumatize the younger cast but, at the same time, it does make Little Monsters, a film that features both a disemboweling and a human face getting torn off, feel oddly bloodless.

But while the zombie action isn't that great (I mean, don't get me wrong, I'm always up for a disemboweling in my zombie media, but this film needed more gore to really get my attention in a crowded genre), the laughs are plentiful. The cast is able to mine a lot of humor out of the situation, the need to keep the kiddies from seeing anything gross or icky or scary so they get to remain being kids. Dave and Audrey lie regularly to the kids, saying that it's all just a game, that the blood and gore is just an elaborate jam fight, before picking up a ukulele and singing a song to calm to kids. It's an amusing setup and the two leads are game enough to keep it all working.

The real problem with the film is just that the story is so slight. Having the military base be conveniently right next to a petting zoo (with newly opened mini-golf course) certainly provides a few laughs but it also requires a level of explanation the film never bothers with. If the zombies had just magically appeared instead of escaping for a plot-convenient military installation, that probably would have been better. Even just a simple explanation, like one of the sheep at the zoo having a rare form of Mad Cow, would have been a better explanation that the military base and probably would have afforded more time to focus on the lead characters instead of a bunch of nameless military guys that didn't really matter.

Plus, let's be honest, Dave's plot line is telegraphed start to finish. Because he's the character we start with he's the one we consider the "protagonist" so, obviously, he's going to find growth, learn how to step up and be an adult, how to win the heart of the girl he's attracted to. If the movie wanted us to be surprised by this it should have given more time in the opening to Audrey, let us know about her and have her become a co-protagonist. Then whether or not Dave grew up, if she felt like he was worthy of her, would have a been a matter of contention throughout the movie. Instead, Dave is our hero so he'll become the man he needs to be and win his prize, Audrey, in the end. 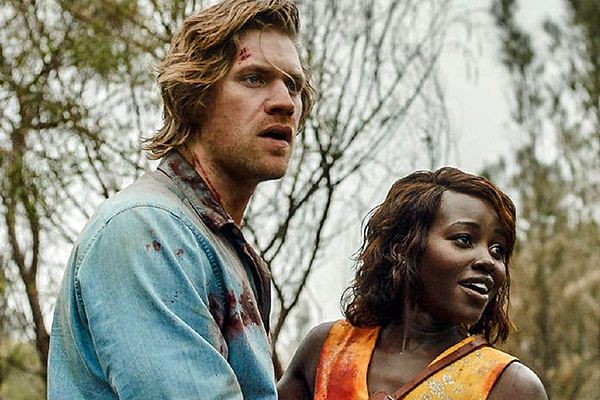 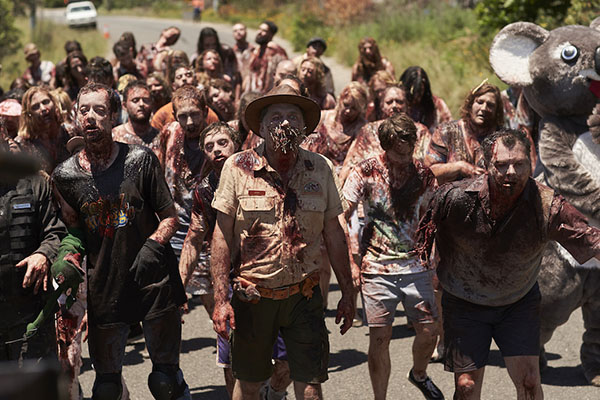 Honestly, if this movie had been from Audrey's perspective instead of Dave's, our male protagonist probably would have been nothing more than another failed suitor, one who didn't measure up and then was eaten by zombies in the last act (a fate that befalls another failed suitor, Mr. McGiggle). Audrey is certainly the more interesting character, one that is given a nuanced back-story (as we learn over the course of the film) and is put in an impossible situation with a clear-cut goal. She's the bad ass of the film but, for some reason, Dave is our guy.

I'm not saying Little Monsters isn't a fun movie. It does have some decent gore, plenty of laughs, and a bit of heart. Watching the film, though, I saw the movie it could have been, one that was so much better than this simple little diversion. A movie focusing on Audrey could have been a real show-stopper, but instead the film comes across like the opening band for a much better stadium tour yet to come (probably one featuring Romero zombies instead).