The path Jordan peel has taken with his career interests me greatly. Before the release of his big hit movie, Get Out, he was mostly known for this comedy-duo sketch show, Key and Peele (which is brilliantly funny). He then went from that to making one of the most successful horror movies of recent memory, one that played with a Stepford series vibe to create a commentary on race and white entitlement. Now he has another horror film, Us and is deeply involved in the new Twilight Zone reboot. If you'd asked me a few years ago if I expected Peele to be a horror icon, I would have instantly said, "no." 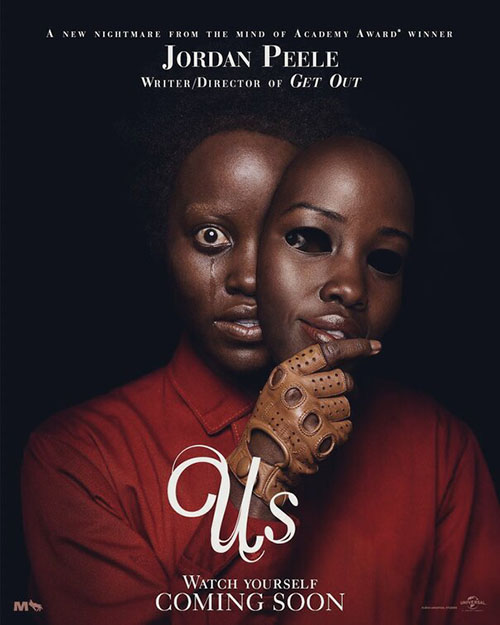 And yet there's no argument against the direction his career has taken. He certainly does have a flourish for horror, crafting interesting tales with good hooks. More importantly, though, he's doing these films from an African American perspective which, if you pay that much attention to horror, is a perspective that's generally under represented -- -there's a reason most African American characters are considered the "token black guys" in film casts. I appreciate his sensibility and his perspective in the movies he crafts even if I don't think his films are that successful as horror movies.

I watch a lot of horror. That should be clear at this point with all the monster movies and slasher flicks I've reviewed for this site already, beyond all classic horror films I've watched for my Castlevania site, The Inverted Dungeon. Horror is easily my favorite genre of films, but it also means that I have high expectations for good horror. It takes a lot for a movie to scare me, or make me cringe, or anything, and when a film can do that, it gets tops marks in my books since horror should be scary. While I like Peele's movies from the perspective of social commentary, I don't find them particularly scary.

Both his previous effort, Get Out and his newest, Us, have interesting ideas in them that twist around their own stories and make you think. In that regard they're both a lot like the Twilight Zone, which I think makes him a perfect producer for that project. That said, while some people love to hold up Twilight Zone as a scary TV show, it really isn't horror; that show (and it's various imitators and reboots) is more about thrilling the audience and making them think (quite often about some social or political concept). Any terror they exhibit is cerebral more than it is scary or shocking. Sure some episodes played up horror elements (the ugly people in Eye of the Beholder for example) but it was always to a greater goal.

That brings us back around to Us, the plot of which hinges on a couple of big, Twilight Zone-style twists (that I won't ruin because the movie is brand new and I want you to be able to judge them movie with fresh eyes). The core story is about a family -- mother Adelaide, father Gabe, teenage daughter Zora, and younger son Jason -- who head to the beach one summer for rest and relaxation. Adelaide doesn't much like this particular beach as, years before (when she was a kid), she had a rather scary encounter at the same beach. She went into a fun house of horrors and then was seemingly confronted with her own doppelganger. Now, during their trip, the entire family is confronted by an entire family of doppelgangers and soon the entire seaside town is fending off their own doppelgangers. The family will have to survive the night, and find a way to fight off their clones. 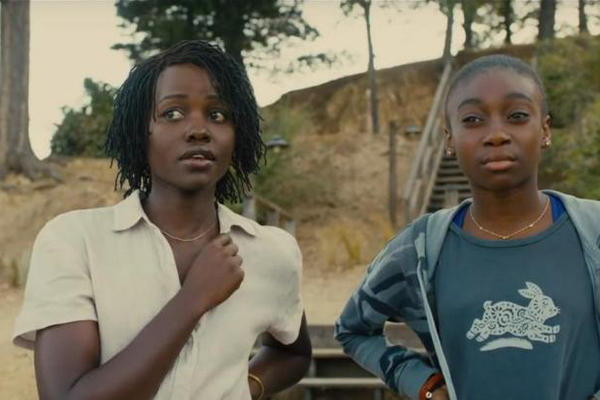 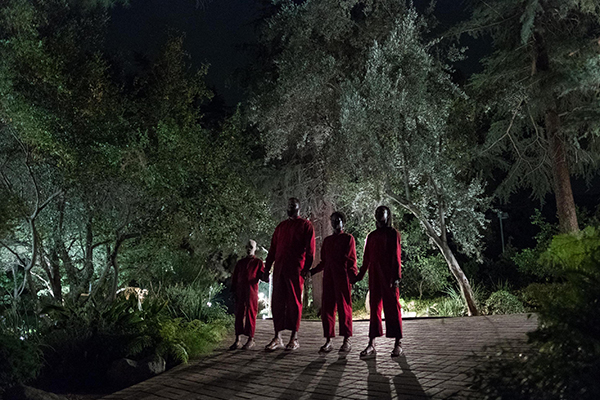 There are a lot of different pieces to Us, but the primary story is a home invasion tale as Adelaide's family has to fight clones that not only look like them but think like them as well. Although the story eventually broadens its scope, adding in a number of those Twilight Zone elements I mentioned earlier, the fight is always comes back to Adelaide (Lupita Nyong'o) and her clone in their struggle for dominance. The most effective moments in the movie are the ones that just involve the two of them, acting and reacting to each other to try to get the upper hand.

But, as noted, I never really found the film all that scary. There are certainly evocative moments, sure, and a decent amount of gore and violence, but it always feels like the film undercuts its scares. Sometimes it cuts away from a kill, hiding the gore. Other times, the scares and kills come out of nowhere, giving us little build up and less time to react. More often than not, though, the film deflates most of its moments with humor. Invariably, right when the tension is mounting, Gabe (Winston Duke) will say something funny and the mounting scare will drain away. That constant sense of creeping dread, that the danger from the clones could be lurking around any corner, never really has a chance to build.

I do like humor in horror movies, mind you. Humor can be a great way to accent scenes, to deflate a scare right before a the tension mounts even further. Humor is a tool that allows a horror filmmaker to fluctuate the energy, to keep viewers on their toes. The best way to handle this is the deflate tension with a joke, only to then quickly build up to something even larger, more horrifying (and often gorier as well). The Evil Dead movies often did this, and the climactic final act of Cabin in the Woods is a master class in this kind of horror-humor balancing. Us never manages to strike that balance so, as a horror movie, it's never quite successful.

Mind you, if you want to see the kind of horror movie I was expecting from Us, all you have to do is watch the phenomenal trailer for the movie. That trailer manages to build up the sense of dread, the feeling of the movie sliding off the rails, mounting terror in scene after scene. The score of that trailer amps up the tension, it creeps you out in a way the full film is unable. Going in to the film I expected a certain kind of horror, that same mounting sense of dread throughout the picture, but the horror-comedy mix doesn't provide that. Us just isn't a straight-up horror movie. 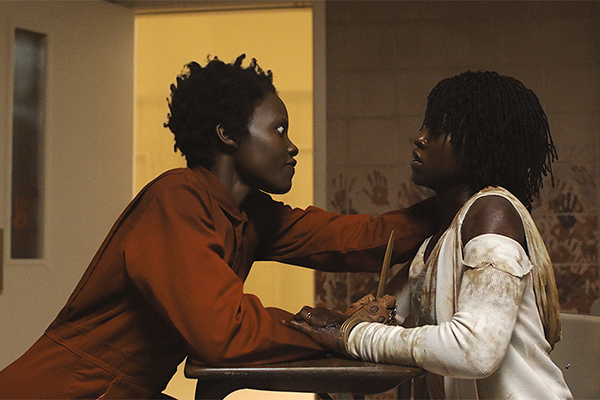 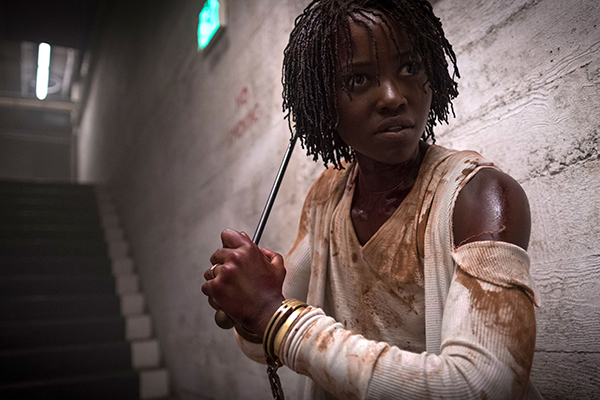 As a horror-comedy or a horror-social commentary, the film is much better. There are like people that can do a better job than I of analyzing the subtext of this film. Suffice it to say that Peele manages to work in a lot of strong discuss about what it means to be an "other" in society. Characters end up feeling caged off, hidden, left alone with their deepest fears, which I'm sure speaks to a whole demographic of viewers for the movie. Of course, I'm a white dude so my internalized feelings for the message of this movie will be different from if I was black, and maybe in that same regard the horror would have played different from a different social group. Maybe. But I did appreciate the message Peele subtly worked into the movie (even if the scares never materialized for me).

And, really, the biggest issue I had with the movie was that the big twist, the one that recontextualizes a lot of the film, I guessed within minutes of watching. There's big possibility that the whole of the film could have been much scarier for me, would have had me leaving the theater running it over and over in my head, if I hadn't essentially spoiled the story so quickly. Sure, I didn't guess all the big story beats, but one key detail clicked in my head and I was already viewing the film from a remove from where I should have been. It just didn't work for me after that.

Other people will have their own issues with the movie. There movie does a big reinvention of its story by the last act (even before the big twist) and I've read a number of people complaining Online about how the story doesn't really make sense. Some accuse the film of overreach, which I don't agree with -- if you view this film not as a horror movie but as a weird, Twilight Zone tale, everything about the movie clicks in that regard. The building story, the twist that makes you look back at the film, it all works like the better episodes of that classic series. But that's also the problem: once you know the big twist in any given Twilight Zone episode, they're never as effective again.

That then leaves me at a weird place over Us. I do think the movie has it's charms -- a great central cast, amusing moments, interesting ideas coupled with good social commentary -- but I wonder how well its going to hold up. A movie like this is going to hinge on its twists, making people want to watch the film a second or third time to catch everything. If you're like me then that whole impetus won't be there, and if you're like others and felt the story lost its way in the back half, would you want to re-watch the movie at all? The movie is well made with big ideas, but I don't think it's going to have the staying power of Get Out -- its story just isn't as well executed. It's fun, but ultimately becomes shallow once all the twists, the very things that are supposed to deepen the film, start to come out. 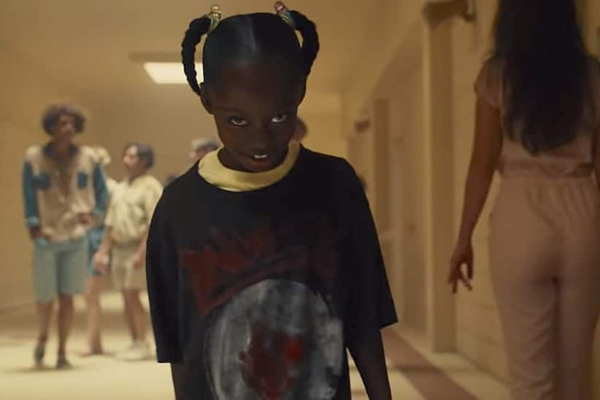 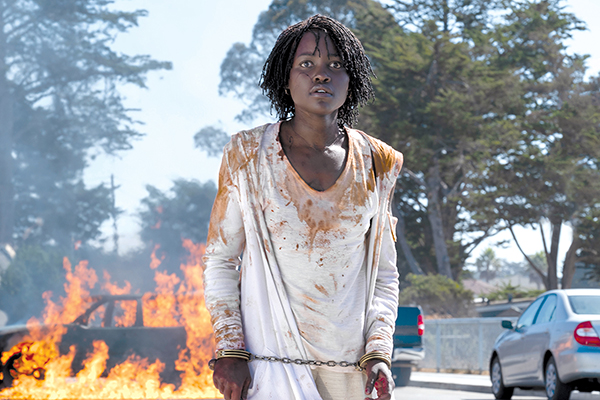 If the film had just remained a home invasion movie it might have been scarier, but then would people be talking about it the way they are right now? For me, I'll take the flawed version we have over a simpler, more basic story. Even if the film didn't work for me as well as it could have, I still like the ambition of the project, the weird places Peele went with this movie. And I have no doubt about the places his horror career will go: even if his films don't get any scarier, they will still always be conceptually interesting.