In the wake of John Wick (a movie I really need review sometime soon), a whole slew of movies came out to capitalize on the success of the film. In much the same way that the early 1990s saw a glut of "like Die Hard but..." movies where a single cop was forced into an absurd situation to take on terrorists, and then more recently the success of the Liam Neeson actioner Taken saw a whole bunch of older "dad" folks taking on all manner of bad guys in a number of movies (many of them starring Liam Neeson), now a selection of movies see unconventional actors getting their "John Wick but..." vehicles. Hotel Artemis is essentially that vehicle for Jodie Foster. 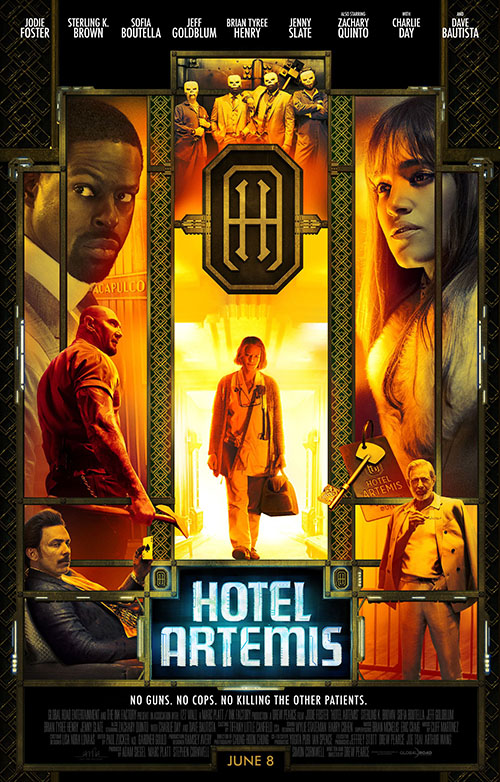 At least that's what many reviewers said about the movie (and certainly the producers of the film wouldn't mind viewers drawing that comparison). Both John Wick and Hotel Artemis show a world were trained assassins have their own secret underground, a civilization just past our normal scope with its own rules and requirements. This setup between the two films might be the same, but the two couldn't be farther apart otherwise.

For starters, Keanu Reeves is much more of an action star than people seem to give him credit for. He didn't just star in the The MatrixA speculative future story with superhero and anime influences, The Matrix not only pushed viewers to think about the nature of their own reality but also expanded what filmmakers could do with action sequences and filming. It then launched a series of movies, games, and comics, creating a franchise still talked about today. series, but also Point Break and co-starred (and directed) Man of Tai Chi. His action bona fides are strong whereas the only actiony movie Jodie Foster has been in is The Silence of the Lambs. While it's a good movie, and Foster is a fantastic actress, she's not who I'd immediately cast for an action movie.

But then, to its credit, Hotel Artemis is less of an action movie than a thriller with sci-fi trappings. It tells the story of a single night in the titular hotel which is really a front for a criminal hospital. It is one of many establishments around the world where trained killers (who are paid up on their dues) can go when they need patching up. It's a "no questions asked" kind of establishment with only a few basic rules: no weapons allowed on the premises, and no one is allowed to kill each other. Into this setting arrives Waikiki (Sterling K. Brown) -- the name the character is given as he occupies the Waikiki Suite at the hotel -- who is dragging his brother along. His brother, Honolulu (Brian Tyree Henry), had just suffered a gunshot wound at a bank robbery gone wrong and now they both need patching up from the Nurse (Jodie Foster).

Also, Waikiki's brother stole a pen from someone at the bank and the pen contains rare diamonds. The pen's owner, The Wolf King (Jeff Goldblum), holds a dim view of people who steal from him, and wouldn't you know it, the Wolf King is about the arrive at the hotel as well. This is about to bring a whole world of trouble down on Waikiki, the Nurse, her orderly Everest (Dave Bautista), and the other trained killers staying at the hotel. They'll all have to work together if they want to survive the night. 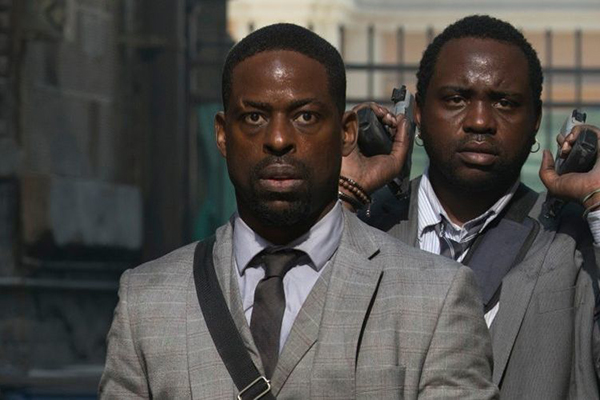 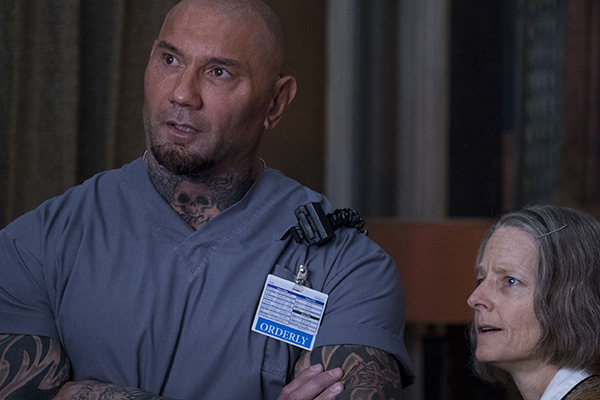 The setting for Hotel Artemis is certainly its greatest strength. It's obvious that the writers for the movie tried to think through all the background needed for a hotel like this. The setting is rich with details and the early scenes exploring the hotel, it's rules, and how everything works are the strongest scenes in the movie. Jodie Foster moves through these scenes with determination and she controls the floor whenever she's on screen. The movie shines when the Nurse is on duty.

But then Foster is an Academy Award winning actress and she can effortlessly act her way through anything. Even the worst movies to feature Foster, like Panic Room and Elysium, are still great whenever she's on screen. Sterling K. Brown is also a great actor, although he doesn't manage to hold a candle to Foster. He's a good supporting star, but even though he's effectively the co-lead he's outshone by Foster. Baustisa, though, is actually able to go toe to toe with the actress and steals a few moments from her. I never thought a professional wrestler-turned-actor would be able to hold a candle to Jodie Foster, but Dave Bautista has the talent and it's impressive.

What betrays the movie is not the setting or the talent on screen (and this movie has a bevy of good actors, including Goldblum, Sofia Boutella, Jenny Slate, Zachary Quinto, and Charlie Day. No, the simple fact is that the setup for the movie is much more interesting than the actual story the film wants to tell. Once it gets down to the matter of the stolen diamonds and the Wolf King's revenge, Hotel Artemis becomes just another caper film. The setting is interesting but the story is pretty rote.

It's weird, too, because there's so much setup for the movie that doesn't really pay off all that well. The film has this whole expansive world it builds (via information conveyed) about how the assassins of the world get their jobs, the organization they work in, and the support staff needed. Yet the film never leaves the single floor of the hotel. It's essentially a bottle episode, an entire movie shot on the cheap at a single location, which means all the cool details about the setting are told to us, never shown. It's something John Wick certainly handled better -- anything we wanted to know about John we learned as we watched him. Nothing had to be told to us as it was all conveyed through his actions. 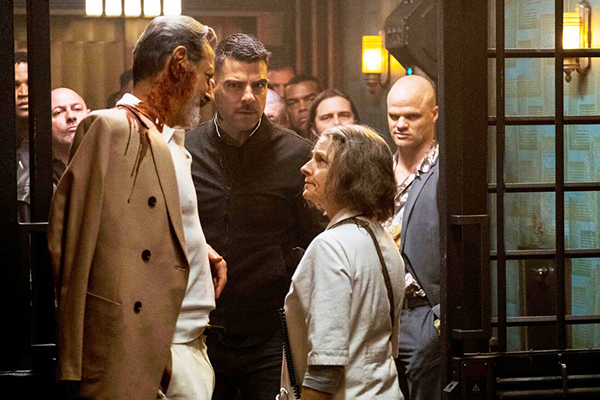 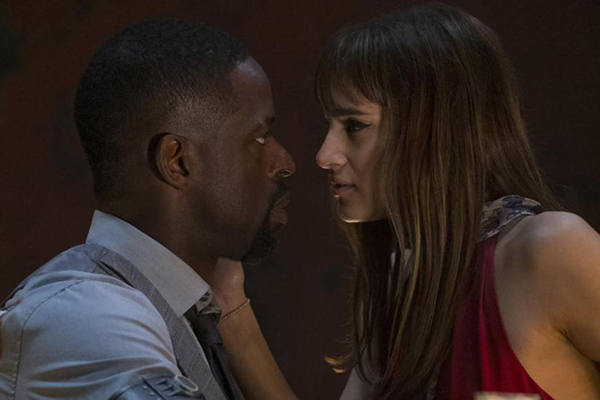 Hotel Artemis also has sci-fi trappings that are neat at first blush but don't really add anything to the story once things get going. The film makes a big deal about 3D-printed organs, future-tech scanners, and all the other neat trapping the Nurse uses, but once the film really gets going none of that matters. It's hardly essential to the plot, especially once everyone is patched up and the real action begins. The same story could have been told in our present day (like John Wick appears to be) and it wouldn't have changed the basic gears at all. In fact, making it less sci-fi might have aided the movie by forcing the writers to justify everything the Nurse does instead of hand-waving sci-fi magic at it.

The movie suffers because it has such a great concept any no idea of a real story to tell with it. Hotel Artemis is enjoyable when you first watch it, but at the end of the day it leaves you feeling empty. It's fun but shallow, with it's greatest crime being that it wastes a fantastic performance by Jodie Foster.