Clearly, there's a love for monster movies on this site. We do have a series of featured articles called "Monster Mondays", and there's o greater monster than Nazis. Or Zombies. Take your pick. Thankfully for us, along came Overlord, a movie dedicated to mashing Nazis and Zombies together into one giant monster we can hate with glee. You know, like those other Nazi Zombies movies, such as Dead Snow and Dead Snow 2: Red vs. Dead. Well, and if we want to push far enough out, there's the various Wolfenstein games. There are a lot of Nazi Zombie productions. 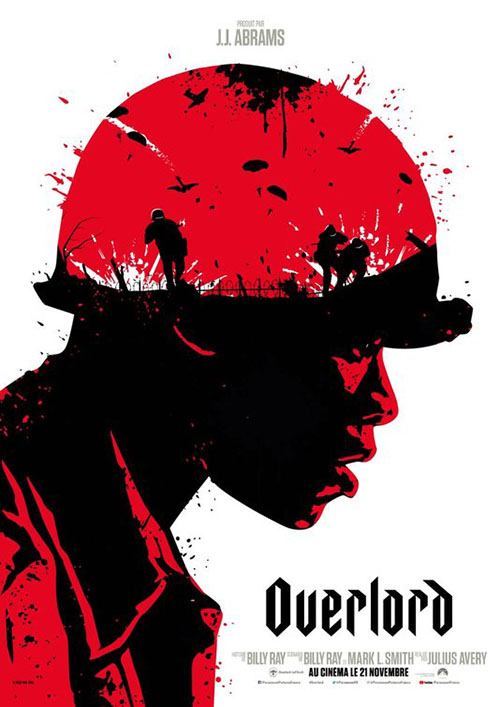 That, more than anything, hurts Overlord right out of the gate. If this film had come out years ago, the concept of a serious, World War II film that just so happened to mash zombies in at the half-way point could have worked. It would have been a fresh, interesting concept. Now, though, a film has to do more than place Nazis and Zombies together to make a great monster movie. It has to do something new and special with the material. Sadly, Overlord does not.

As a "serious" World War II movie, Overlord drops us into the start of D-Day, with a troop of soldier air dropping in behind enemy lines. Their target: an German-controlled radio tower. They have to take out the tower to cut off the German communication structure for the region -- no tower, no way for the Germans to communicate orders across the battlefield. Unfortunately, the various plane dropping in the soldiers are spotted, and what was supposed to be a stealth operation becomes a giant flaming battle in the sky. Most of the soldiers are killed, and we're left with a rag-tag handful -- honesty decent new recruit, Pvt. Ed Boyce (Jovan Adepo), Pvt. Tibbet (John Magaro), team sniper; Pvt. Morton Chase, a photo-journalist (Iain De Caestecker); and explosives expert Cpl. Ford (Wyatt Russell) -- to handle the mission.

Once they reach the French town the tower is station in, though, they run into further issues. The town is overrun with Germans, led by SS Officer Capt. Wafner (Pilou Asbaek), making it difficult for the team to move around. They're aided, though, by Chloe (Mathilde Ollivier), a young woman angry with the Germans. This team of five, then, will need to find a way into the base to take out the tower, but they'll have to contend with the various horrible experiments the Germans have been concocting deep within. You know: zombie experiments.

To be fair, this isn't really a zombie movie. Sure, many of the people experimented on by the Germans were dead (as is revealed in the story), but this is about the weird, evil serum the Germans discovered. it has the ability to bring back the dead, sure, but they come back wrong -- angry and powerful and with a lust for murder. They aren't zombies, though, in the classical sense -- they don't have an infectious bite and they aren't rotting corpses. They're monsters, sure, but when someone calls this a "Nazi Zombie" film, that's a bit of a misnomer. 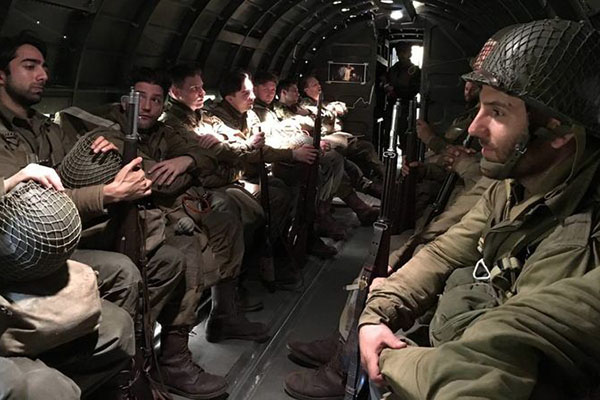 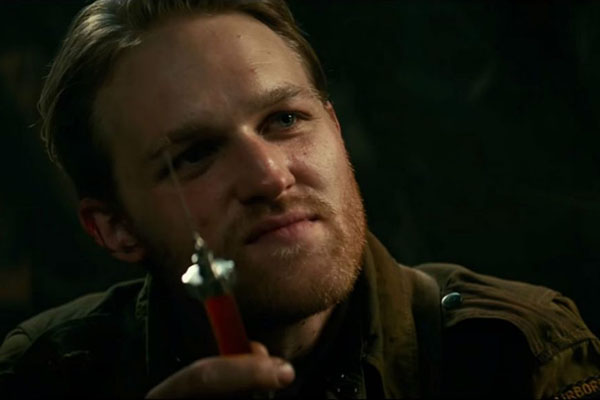 What this film is really about is the horrors of the Nazis. Sure, the Nazis are bad guys and it's so very easy to hate on them. If you were to write a movie about "history's greatest monsters", Nazis would be right at the top of the list. But while it's easy to hate them, this is material we've seen before. If this had been a normal, non-fantasy-based, film, a serious look at the horrors of the Nazis could have made for a tense and tight film -- doubly so if it were based on a true story. But because this is a fantasy film, the horrors of the Nazis is blunted by the fact that nothing we're watching really happened. The film uses Nazis as a shorthand for the kinds of people that would do horrible experiments, but it doesn't really use them beyond that. Just about every German in the film is a nameless, rank-less soldier, there to be hated and then killed. These are the villains of the film, but they're a caricature of history's monsters, robbing the film of true horrors.

If the Germans aren't scary (weird as that is to say), then the horrors have to come from the actual monsters: the zombies. But here, too, the film blunts its impact. The zombies are all weird, CGI affairs, presumably cheaper to make but with none of the impact of humans done up with actual makeup. And because they're CGI, the film is weirdly bloodless. A proper zombie film should have biting and tearing, gore and viscera, but there's barely any of that in Overlord. Walking out of the theater, I thought I'd just seen a PG-13 film due to how little gore there was (not even one good disemboweling), but I was shocked to see this was an R-rated film. Whatever reason the movie got that rating, it wasn't for the scares.

So without scary Germans or scary Zombies, we really have to have a good crew of people to care about. The movie would have to focus on our heroes and make each and every death of theirs mean something. I will credit the film that the soldiers aren't as character-less as the Germans, but that doesn't mean the soldiers are better than one note: Boyce is the innocent good guy, Tibbet the jerk, Chase is naive and out of his depth, and Ford is shell-shocked and closed off. Boyd, by sake of his character, is our hero for the film, but we never really learn anything about him. Sure he doesn't want to see a German soldier tortured for information, but I wouldn't say that colors his character (unless we count basic human decency as "color"). Ford is the only character with any kind of depth, but we still don't see much of it due to the way his character is written. There's a story behind his shell-shocked exterior, but there's never a break in the mission to let us learn it, robbing us of potential.

The real problem is that everything here is just so generic. The Germans as bad because Germans are bad without any explanation of how they got here or why they're so willing to do horrible experiments -- their motivation is simply "Nazi's are bad," which is a plot point I've seen before. The mission is basically an after-thought, something to finish up at the end of the film, the big climax to end the movie. Without any villains to really hate or heroes to bond with, all we're left with is soldiers smashing against each other and zombies thrown into the mix. 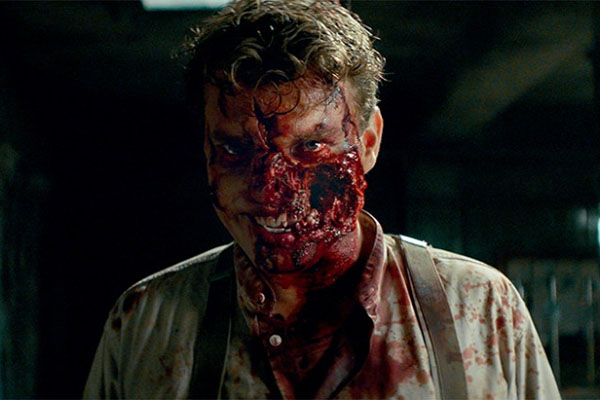 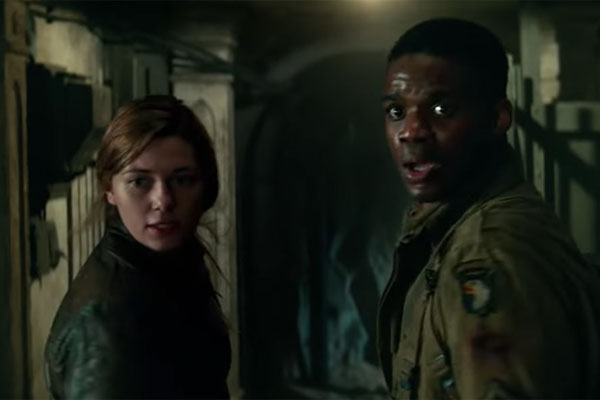 The fact that the movie wants to be a "serious" war movie means that the film forgets to have any fun. I get that World War II isn't a "fun" time, per se, but this is a horror movie. Horror works best where there are little bright points of levity to accent the truly terrible things on screen. If you inert the occasional joke, or lighter moment, not only does it give the audience something to bond with the characters over, but it also spikes the horror. If a movie is non-stop terror and body horror, the audience becomes numb to it. If you insert levity, though, the audience rides a roller coaster and never becomes immune to what's on the screen.

The trailer for Overlord knew this: the trailer contrasts the horrors on screen with AC/DC's thumping guitar riff from "Hells Bells". You know what doesn't show up in the movie at all? "Hells Bells", nor any other AC/DC or hair metal at all. Now, I'm not saying that the movie had to have hair metal (or other 1980s pop) in the film, but it did help to accent what we were seeing with something fun. It gave the trailer a propulsive energy and told us that the creators of the movie knew how to have fun with the concept. Overlord, however, doesn't actually know how to have fun with Nazi Zombies -- it's wants to be dark and serious. It just doesn't work.

Why make it a serious World War II film? This movie could have had fun if not for the setting and the forced tone. It would have worked just as well (or better) in Vietnam, or Korea, World War I, or the Civil War. Nothing in the film shows us a good use of the setting, instead swapping in shorthand historical notes ("Nazis are bad") for real character development and motivation. A Civil War Zombie story, for example, could have been interesting, could have done something new with the idea of Zombies and given us something we haven't seen before. A movie like that could have been fun; World War II-set Overlord is not.