This Won't, This Won't Rock You

Biopics are not easy movies to make. Okay, really, good biopics are not easy to make. Most biopics aren't all that great, largely because they stick to the same formula over and over again: rise from obscurity, enjoyment of fame/power, fall from grace, find humility, rebuild to new heights. This is especially true of musical biopics where, invariably, the "fall from grace" period is fueled by drugs. Lots and lots of drugs. The best biopics are able avoid this formula (as well as all the schmaltz that goes with retelling a story) to find some kind of hidden truth behind the biographies and articles worshiping an artist. 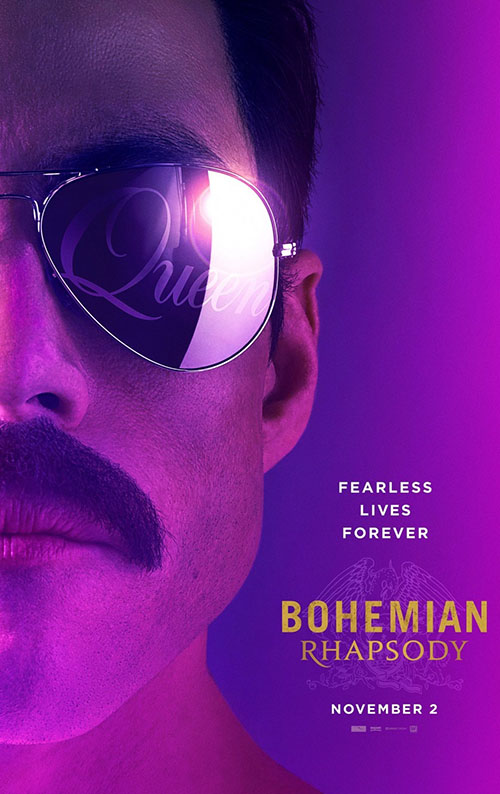 Sadly, the new Queen biopic, Bohemian Rhapsody, is not a good biopic. It's barely an interesting movie, to be frank, and the fact that it's a movie about one of the biggest rock bands of all time really illustrates how much this movie whiffs it. If a movie can't make Queen seem interesting, it's doing something wrong. And yet...

Although, really, this isn't a Queen biopic; it's the story of Freddy Mercury (Rami Malek), a down-on-his-luck luggage handler working on the London airport, still living with his parents as he finds his path. That path leads him to join up with a band, Smile, right after they lose their previous lead singer. After a quick and dirty audition with the two remaining band members, Brian May (Gwilym Lee) and Roger Taylor (Ben Hardy), they quickly hire a new bassist (since Freddy doesn't play bass), John Deacon (Joseph Mazzello), and soon are calling themselves "Queen". The movie then charts their course through their various big hits (and some weird little songs), past a temporary breakup, all leading up to their big reunion performance at Live Aid in 1985.

Now, don't get me wrong: Freddy Mercury is a charismatic presence and certainly portions of any film or mini-series about Queen need to dedicated to him. The problem is that this is the story of Queen -- if they wanted to make a movie just about Freddy Mercury they should have found a better focus for the story than to chart the entire course of the band (up to 1985, anyway). Maybe a deep exploration of his early life (which is largely glossed over), or fleshing out the third act -- the break up of Queen so Freddy can go record to solo albums -- into it's own movie instead of just getting through all of that in 10 minutes. There are so many interesting parts to his life that to gloss over all of them in montages about the band undersells his story.

Worse, though, is that it treats the rest of the band like background players. They aren't "supporting" characters in the film so much as these guys that show up in the studio once in a while to help Freddy write music. It's surprising that the film barely uses the other members of Queen in its story since both May and Taylor were consultants on the film. Did they simply not want to have their stories told, or were the writer and director not interested in anyone not named "Freddy Mercury"? 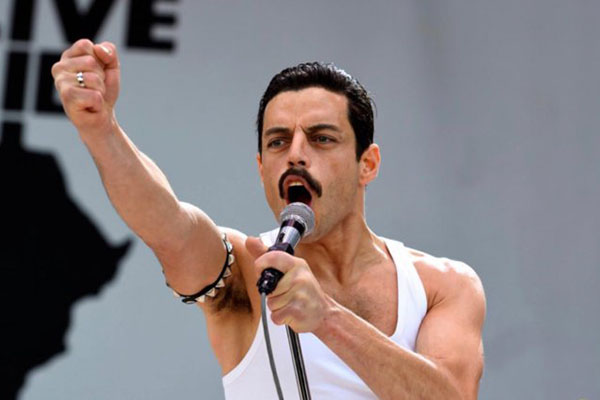 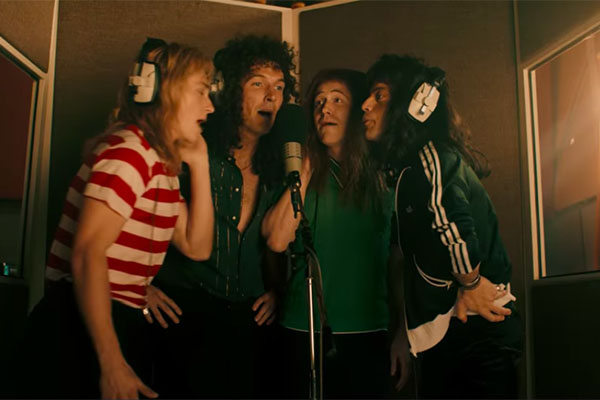 It's weird because the film constantly makes mention of the fact that the other band members have lives -- they get married, have kids, cheat on their spouses -- and all these facts are just dropped on us as if we're supposed to know it. I guess if you're a Queen super fan you might know all about these guys, but the point of a movie like this is to retell their story for dramatic effect. It's like all the rest of the band members had a different, parallel movie they were starring that just so happens to cross over with Freddy's movie from time to time. Their movie certainly sounds interesting, but it's not one we get to see this time around.

Sure, the movie sticks to the basic formula of one of these types of films. We get to watch Freddy argue with his parents before joining a band (rise from obscurity), then we skip ahead a year. The part where we get to see them bond, group together as a band, earn the respect of the fans? Not worth this film's time. One day they're obscure, the next they're (local) famous. So then they write and record and album and it becomes huge. How do we know this? Because we're told it before the movie skips us ahead again. They write a huge song, tell their studio to kiss off (enjoyment of fame/power), and then launch into a huge and successful tour, all of which is quickly breezed past because, again, settling down to tell a story isn't what drives this film.

Freddy is the one that causes the next phase, fall from grace, and it's because he's insecure and bonds with the wrong person. Sure, this could be interesting, but not in the five minutes the movie devotes to it. This is enough material for a two hour drama on it's own (Freddy's many lost loves and gained insecurities). It could also be a great coming out drama, if the film were interested in that. Which it's not. Then Freddy has to go find humility, so he has one conversation with the band and all is forgiven. Oh, and then he talks to his family and they instantly love him again, too. After years of not speaking at all. I want some story, some drama from my films, but this movie treats Queen like there's barely any hardship in their history. I doubt that's how their story actually went. (And if it was, why the hell did someone make a movie about it?)

So, okay, let's not grouse about the story when, really, the whole goal of a film like this is to hear Queen's best tracks while actors dance around on stage. If that's all you want from a Queen movie, this film once again fails you. For a movie about Queens there's not nearly enough Queen music in the film. Sure, we get snippets of a few tracks, but not a single song is played through in it's entirety. Like the montages of the band's history (of which there are several in the movie), the songs pop in and out quickly just to accent a scene before being shuffled off like so much of the history of the band itself. 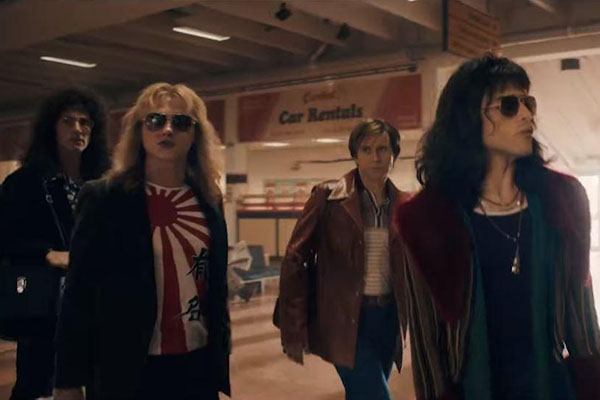 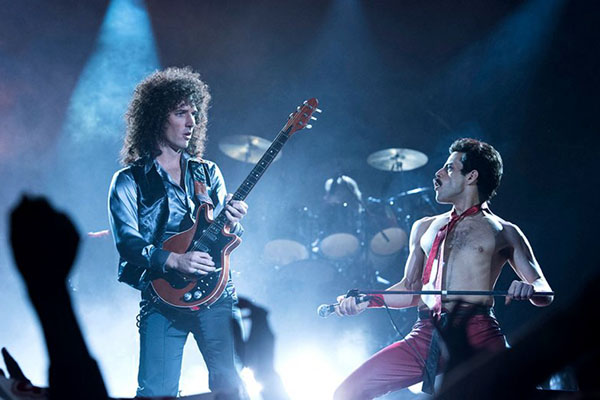 Most galling is that this film is named after one of the most famous rocks songs of all time and we don't even get to hear it once through in the movie. Sure, there's a good five minutes dedicated to the recording of the song (in montage form, of course), but we never get to hear the song straight through. Hollywood: if you make a movie named after a song, about the band that wrote that song, and use that song in all the production materials for the movie, actually let us hear the damn song.

I will credit that the film does build up the last act, Live Aid '85, nicely. This does somehow feel like an epic moment. The problem here is that it just can't help but layer on the schmaltz. We get to see the performance (well, a paired down version for the screen, anyway, although supposedly the production team did film a 20 minute version of the whole performance), but it's constantly inter-cut with people in the crowd, and at a local tavern, rapturously singing along as if the music of Queen were the voice of God, bestowed upon them from on high. Queen's music is good, and "Bohemian Rhapsody" is great, but I'm certainly not going to join in with a bunch of schmucks at a bar to sing along with it. There's heightened movie reality and then there's just plain stupid.

When I wrote a preview for this movie a month ago I noted that all the film had to so was give us Queen's music and I would have been fine with it. I stand behind that statement: had the film given us the music of Queen -- full tracks, played so we could enjoy them -- this film would have at least been passingly acceptable. Instead we got "Queen: The Montage" without any songs (even the title track of the movie) played in their entirety. And without the music to guide us, all we're left with is a ADHD biopic that can't settle down long enough to give us a good, dramatic story.

I'm sure there's a good biopic of Queen that could be written and produced. Bands have a lot of great stories, and I'd love to see some of this band's great stories (sound-tracked by their greatest hits). This film, though, is a wasted effort written out of two-plus-hours. Do yourself a favor and just buy Queen's albums instead; it'll be more satisfying.