There are a handful of games I'll go back to once in a while to kill some time. I've already written at length about Diablo III (repeatedly), and of course there's my long discussions about both Borderlands and Borderlands 2. These are all great games to drop into, kill 30 minutes or so, do a few quests, and then bounce out again to go find something else. Another game though that I come back to, one that isn't nearly as popular, is Party Hard. I picked this one up on the cheap on my Xbox a while ago when it was sale and I'm glad I did because it's a fun little gem. 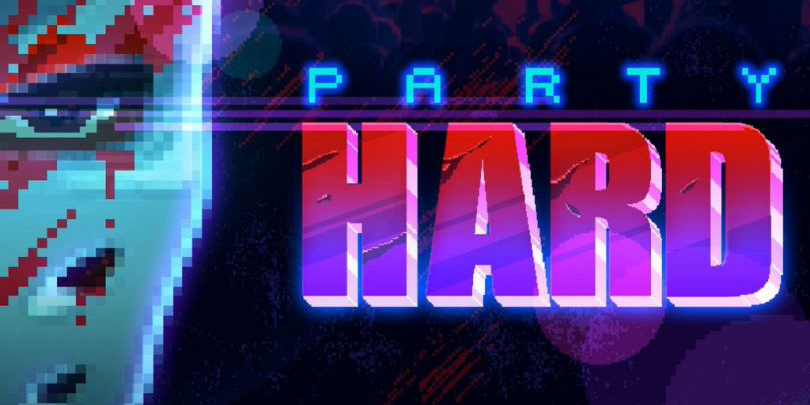 Now, let's be clear from the outset that this game is violent. It's essentially a game about playing as a slasher killer going around and taking out parties of teens. Most people would probably be turned off by the concept since, yes, you're essentially committing mass murder, repeatedly, in a video game. Stated like that, the game sounds absolutely reprehensible.

The thing is, the game is so beyond cartoonish that it's hard to take the violence seriously. It's essentially presented with graphics only slightly better than an Atari, with chunky characters and very little detail to anything. And the violence is cartoonish, too, with you setting out traps and bombs and the like to get your kills up. It's like a slasher movie run through a Spy vs. Spy or Wily Coyote filter. It's dumb and silly but amusing in its own way.

Once you get past basis of the game (or just come to embrace it, like I did, but then I love slasher movies so I'm probably the core demographic for this game), the game really presents itself as a puzzler. Each of the stages of the game are a different party with you, the psycho killer, moving through the events, trying to kill all the people there without being spotted (or, if you are spotted, avoiding getting apprehended by the cops). The trick is to use the layout of the places to kill a few people (usually by stabbing them with the knife you character always has on them) and then either (a) getting out of view of the body before someone sees it, and you, and puts two and two together or (b) hiding the body somewhere it will never be found again (like a dumpster or down a manhole cover -- again, this game is very cartoonish). Navigate through the whole party and kill off everyone (including the DJ, who totally desdeservedrved it for being a glorified iPod) and you win that stage.

However, if you get caught you have to redo the whole bloody affair. This is, really, the biggest problem with the game: that high bar if you commit a single error. Some of the stages, like the Miami Beach Party, are super hard to get kills in since there are so many people in a wide open space it's simply impossible to kill without being seen. Playing through that stage, there were multiple times I was down to my last 10 or so people (out of 50 to start) when one of them would come near me in the act and it was back to the beginning once more. Needless to say, once past it I haven't revisited the Miami party again. 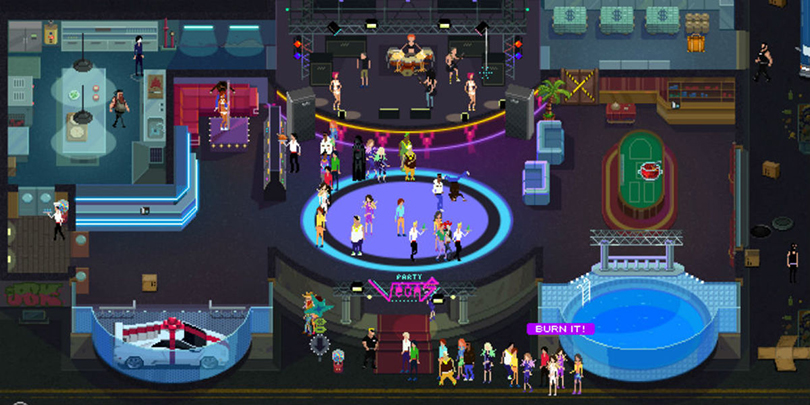 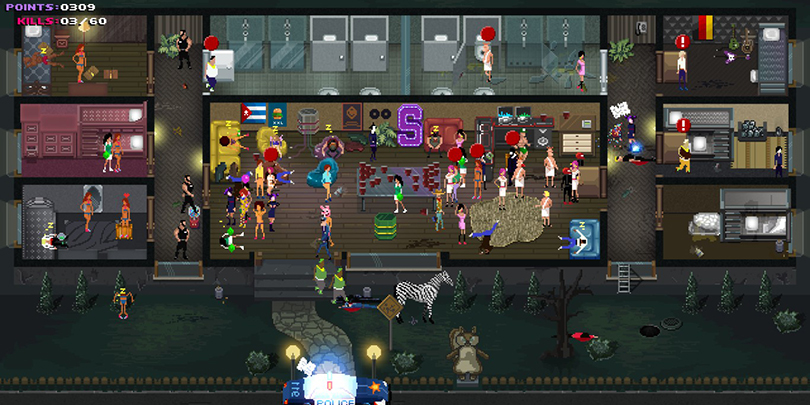 In some of these stages I probably would have shut the game off if not for the really awesome music. The soundtrack for Party Hard is fantastic, a great mix of synth-heavy club and techno tunes. Despite the 8-bit style graphics, the game eschews retro instruments for the songs, and in this case I like that. While a pinky soundtrack would have worked, the more club-style synths really gets you into the grooves of the parties you're at. It's hard to be mad at a death when it just means more time spent with these awesome tracks.

My first play through of the game took a couple of hours (slowed down most by Miami). There were some bonus missions that unlocked at the end, and then I was free to play through all the stages with a variety of killers, just having fun doing my thing. As a bite-size game, an action-puzzler with a weird sensibility, Party Hard was an easy pickup for me. Whether you like the game or not really will come down to if you are cool playing a little 8-bit dude slicing his way through parties. If that game doesn't repulse you, give Party Hard a chance. It might just surprise you.