As I have noted before, I have a deep and abiding love of the Blaxploitation era of films, and this despite the fact that I'm pretty Jewey-white. I've watched my fair share of the films from the 70s-era heyday, and I keep up with modern throwback films. Naturally, of course, this ties in to Spike Lee's films, many of which play with the Blaxploitation era since most of Lee's movies are about being Black in America. I don't always like his movies (some of his more recent releases have been pretty hit or miss), but it easy to see that the man certainly has a particular vision and a message he wants to convey. 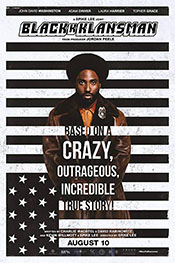 His most recent release, BlackkKlansman, ties in to the types of movies and messages he likes to make. In many ways it's very much a message movie, one that purposefully will go out of its way to hit you over the head with what it's trying to say (so not always the most subtle film). At the same time, though, this is very much a funny, well produced, crowd-pleasing entry in Lee's oeuvre, at least if you're not a fire-breathing Trump fan.

BlackkKlansman tells the story (based on a true story) of Ron Stallworth (John David Washington), the first black officer to join the Colorado Springs Police. He's very much a racial hire, with the opening scenes of the film establishing that the Colorado Springs local government wants a minority hire to flesh out the white men's club that is the P.D. Stallworth, of course, has to deal with some institutional racism, specifically from one pretty jerk-ass cop, but that's not the primary story the film wants to focus on. No, as the title would imply, this is the story about how Ron became a member of the KKK. Specifically, after spotting an ad in the newspaper while sitting at his desk at work, Ron calls to get more information about the KKK. From there, he, and Jewish officer Flip Zimmerman (Adam Driver), become two sides of the same persona, infiltrating the KKK to find out whatever violent plans the group may have.

The movie wants to tackle a lot of serious issues -- institutional racism, white supremacy, and how all of this affects everyone -- but it smartly does so through humor. Much of the film is really quite funny deriving humor from the ridiculous situation of a black man effectively joining the KKK (including getting a membership card in the mail). The concept is the stuff SNL sketches and yet, the core story really did happen. The KKK really did, stupidly, accidentally let a black man become a card-carrying member.

The interactions Ron has with the KKK members over the phone, as well as the face-to-face meetings between Flip and those same KKK members, manage to mine a lot of laughs. Ron going on about how he hates black people over the phone to then get the KKK members (including David Duke, played by Topher Grace in the film) to just go on and one, talking more smack while Ron is just laughing quietly at their stupidity, these are the scenes that really make BlackkKlansman sing. You hate the KKK (well, you should if you're going to see BlackkKlansman), and the movie is able to make the buffoons laughable in a very cathartic way. 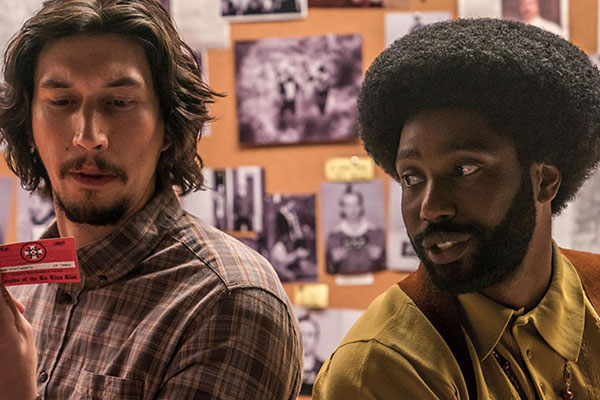 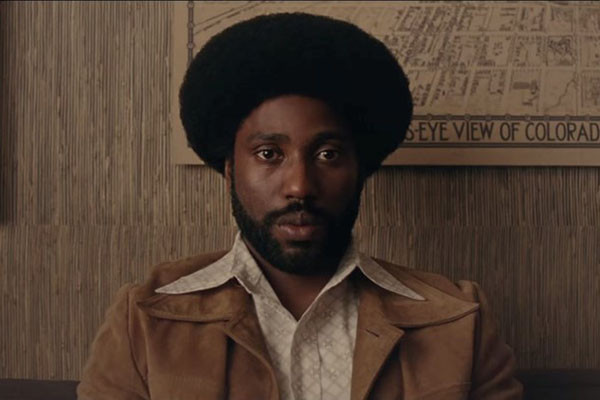 Most of the interactions are Spike Lee's own interpretation of the conversations as the source material, a memoir written by the real Stallworth, was pretty dry (effectively a police report about the whole affair written after it was all concluded). While the actual conversations probably didn't play out in real life as they do in the movie, that doesn't matter as the movie's scenes are so satisfying. This film serves as a kind of release for what's going on in the world right now, a well-timed reminder that things can get bad but also they can get better but only if we work on improving the world ourselves.

And the movie does at times focus on that message. As funny as parts of the film are, there are sections that get super serious as well. Sections of the film will make you uncomfortable, the drama of the situations (the institutional racism ever present, as well as the fire-breathing racism of the KKK) draining away the feel good vibes. It's a trick Lee plays with, back and forth in the movie, lifting the viewers up before hammering in a message. Sometimes he hammers the message a little too hard -- a scene early in the movie at a speech held by the Black Student Union goes on longer than maybe it should have as Lee milks the scene for ever last hit of the point he can get -- but considering the world we currently live in, with white supremacy on the rise again and a president that seemingly not only turns a blind eye to it but encourages these groups, maybe hammering that message hard is what's needed.

Nowhere is that more clear than at the end of the movie. After the main story is over, the film then cuts to footage from the 2017 Charlottesville white supremacy march, and all the protests during it. This includes very clear footage of all the violence, including the car attack, driven by a white supremacist, that killed Heather Hayer. The film is then dedicated to her. It's powerful stuff that directly underscores the point of Lee's movie (and pretty much underscores it multiple times hard in bold, thick ink). The crowd at the theater I watched it at was laughing along with the movie on the whole, but that end footage was too much for a couple in the audience and they stormed out. Clearly, at least in their case, they didn't want the real message of the movie.

BlackkKlansman is not a subtle movie. It is, however, a great one. The times Lee brings out his hammer to really drive home his message are then balanced out by a super funny con-man flick, one where the cons are working within the system to take out the bad guys. The movie would have worked without all the political stuff, sure, but then it wouldn't have hit home nearly as well. It also wouldn't have been a Spike Lee Joint. And, let's be honest: if you're going to see a Spike Lee movie, don't be upset when what you get is a Spike Lee movie. 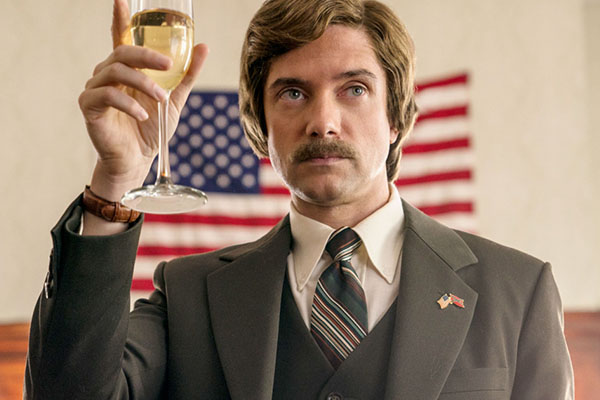 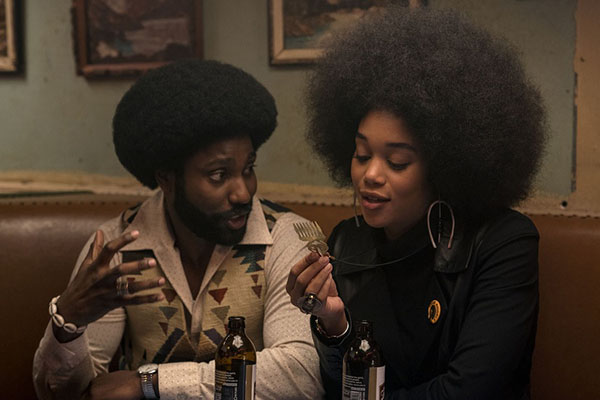 If you're a super-conservative that agrees with President Trump that not all white supremacists are bad guys, well then this movie just isn't for you (and, hell, probably this site you're reading right now isn't either). For the rest of us, the sane ones, the people upset with how this world is trending right now, BlackkKlansman is a power message delivered at the right time. The hope, now, is that the message Lee is pushing actually makes it out there to the masses on both sides of the aisle.