That's Not How Cars Work

After watching through the entire Matrix series a while back I had this lingering urge to then go and watch the rest of the Wackowski's output, compare where they started with where they are now. It was really motivated by an urge to rewatch V for Vendetta (which I likely will in November because, of course). Any excuse to watch that flick I will take. 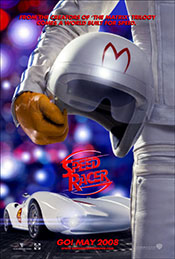 The problem is that pretty well everything since V has been utter crap (and there are those that would argue even that film wasn't that great, although they would be wrong). Hell, even The Matrix Revolutions was pretty assy, so there's clearly been a downward trend in the Wackowski's output since the high point at the start of their careers Bound and then The Matrix). There have been some relative "highlights" (some would argue that Cloud Atlas, based on an all but unfilmable book, was a feat at all), but most of their films have been bombs.

Case in point, 2008's Speed Racer. Based on the 1966 manga Mach GoGoGo that was later adapted in the fairly famous anime of the same name, the film tells the story of Speed (Emile Hirsch), middle son of the Racer family. He's an accomplished driver (one who has wanted to be in a car essentially from the day he was born), and thankfully his family runs their own race car shop. After winning a race early in the film, Speed is courted by Royalton Motors but turns down their offer to sign with their racing team. So Royalton comes after Speed, and his family, in an attempt to ruin them. Speed has to join with two other racers, Racer X (Matthew Fox) and Taejo Togokahn (Rain) to win a few races, get into the Grand Prix, and expose Royalton and all the dirty tricks they pull on the racetrack to win.

As a sports movie, Speed Racer wouldn't have to do much to be at least decently successful -- show some racing, have a loose plot no one cares about, and then get back to the racing. As long as the racing was filmed well, and was propulsive and engaging, nothing else in the film would matter (see also: Days of Thunder). The problem is that nothing in Speed Racer is filmed well. The racing is so beyond fake looking that it resembles Hot Wheels cars running around on a toy track. Maybe that's what the Wackowskis were going for but instead of eliciting gasps of glee at the candy-and-toy-colored cars vrooming around the track, it just looks dull and fake. It's all film up close obscuring a lot of what's going on, and the film constantly, frenetically cuts around the action, never sitting still at all to let the viewers see what is actually going on clearly.

I wish the racing sequences were better filmed and more engaging because the rest of the movie certainly can't bear the brunt of carrying the film. Everything in the movie is over-the-top and fake, including just about all the performances. The movie squanders the immense acting talents of John Goodman (as Pops Racer) and Susan Sarandon (as Mom Racer), getting sub-par performances out of both of them, and these are actors that can read the phone book and make it seem interesting. They still get out of the movie better actors like Kick Gurry -- Gurry's character, Sparky, is supposed to be Speed's best friend but that relationship is never explained. I went through the whole movie thinking he was an older brother, or cousin, that the rest of the family just didn't care as much about since he was always there, in the background, never doing much. I assume he's a character carried over from the cartoon but I'd be hard-pressed to come up with a reason for why since he's never given much to do. 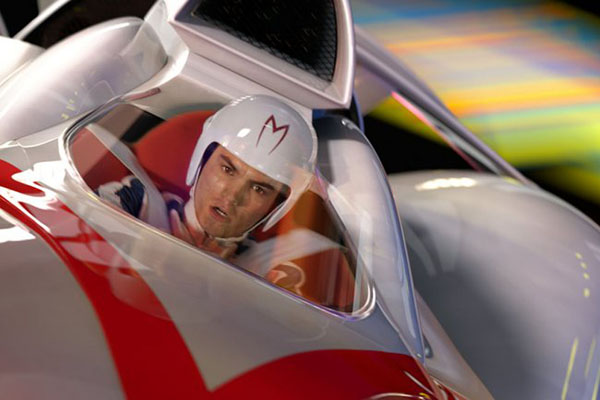 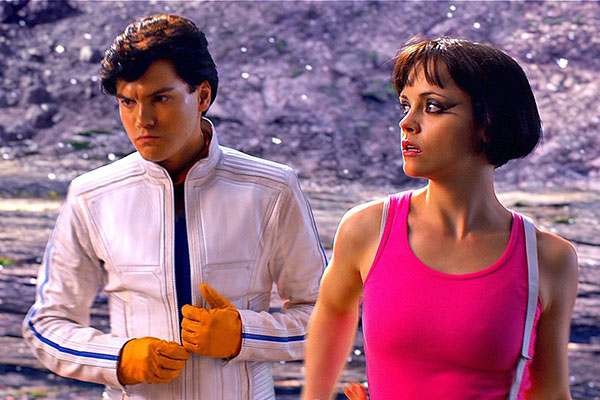 I feel the worst for Hirsch, though, as he has to carry this whole stupid movie on his shoulders and he's just not a good enough actor to pull it off. His Speed is universally bland throughout despite being in every scene and given some meaty scenes to act through. It's especially glaring when he's put up against Speed's girlfriend, Trixie, who's played by Christina Ricci. Ricci brings her A-game to the affair, giving a performance better than anyone else in the movie. If she'd been the star of the flick, the movie would have been eight-times better than it is. It's easy to forget how good of an actress Ricci actually is since she doesn't star in a whole lot, but when watching Speed Racer I'm reminded that this woman should be a star. She carries every scene she's in and can sell the stupidest crap the movie throws at her. Hirsch simply doesn't have a chance even with Ricci trying to carry him across the finish line.

And then there's the monkey. The youngest member of the Racer family, Sprite (Paulie Litt) has a monkey, Chim Chim, that he hangs out with. Again, I'm not sure of the dynamic here as I can't tell if Chim Chim is supposed to be the youngest Racer's pet, or his brother, or what. It's never explained in the movie (probably because it wasn't explained in the anime either), but I couldn't help be wonder what the deal was with the monkey. Why is he there? How can the family be legally allowed to keep him? How can they afford to keep him? Why hasn't the monkey raged out and killed everyone before now? He's clearly the best actor in the film, and should on Broadway performing Hamlet but he's stuck in this stupid, stupid film.

The whole movie is a numbing affair, start to finish. I went into Speed Racer knowing, just from reviews and the general fan-disappointment surrounding the production, that the film was bad. My hope was that, somehow, it would be one of those movies that was so bad it would cross back over into good. Instead, it managed the rare feat of crossing the line three times, from bad to good and then right back to bad again. It was so awful that if I didn't have to watch it for this site I would have shut it off 15 minutes in. I feel bad for the people that paid to see this in theaters as I only paid $2 to get it used on DVD and I feel like I was ripped off.

The best that can be said for the film is that, after a certain point, you get used to how bad and stupid and terrible it is and you just become numb to the experience. I never enjoyed it, I never got into it, and I never cared. I just stopped feeling anything for the film and let it wash over me for the entirety of its over-long 2 hours and 15 minutes. I survived Speed Racer and I hope, from my example, you won't feel the need to do the same.